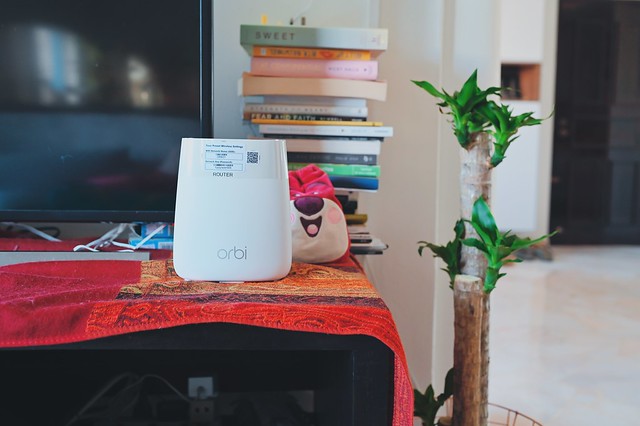 One of the last things I did in the weeks leading up to my departure was fix the wifi situation for Shane’s family and my own. I’d heard about wifi network extenders for a couple of years now – coincidentally around the same time my home wifi started deteriorating. Or perhaps it coincided with the meteoric rise with which my reliance on the internet at home grew, what with new ventures into freelance work and such, making me newly aware of existing dead wifi zones in the house? In any case, it was getting to be intolerable, but like most minor pains in life, we tolerated it anyway, silently, hoping it would get better by fire, flood, or act of God.

Of course the thing that would finally cause me to spring into action would be my departure. For as tech-illiterate as I am, believe it or not, I am possibly the most tech-savvy in my family, and if I didn’t sort it out before I moved, my family might very well be stuck staring at the loading bar in the study forever. Fixing the wifi was on one of my very long list of things to-do prior to my move, but thankfully part of being engaged is having access to my fiance’s very tech savvy brother, a privilege which I abused liberally…

Shane and I lead very different (read: gamer and non-gamer) lives and so the extenders we got differed as well. I got the Orbi Voice for my place and the ASUS AX6100 network for his, and while they essentially do the same thing – extend the range of one singular network coverage – they differ slightly in execution.

In an ideal world, your original router should be sufficient, but for many people (us included), there are many odd spots in the house where the beams of wifi don’t touch. Shane, for example, lives in a railroad style apartment, meaning the rooms furthest from the living room have patchy, nonexistent wifi connection. Previously they had to use two separate routers, but that meant connecting to Network A in the living room, disconnecting and then connecting to Network B as you moved through the house – very unwieldy!

And while many temporary fixes include getting a second router and such, that creates two networks in your house, as was the case in Shane’s place previously. This is opposed to using an extender, which simply extends your original network connection. And having one singular network coverage matters because it would make it possible to do more things with more convenience. For example, if you wanted to send something to the printer, if you wanted to access the television or living room sound system from your room, or if you wanted to move through the house without the network on your phone dropping and accidentally using up your 4G instead of connecting to the next nearest Wifi router.. The reasons go on, and they were good reasons, so onwards to steady wifi we went! 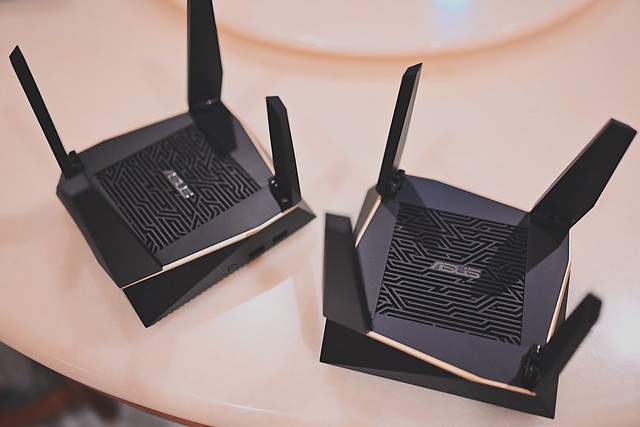 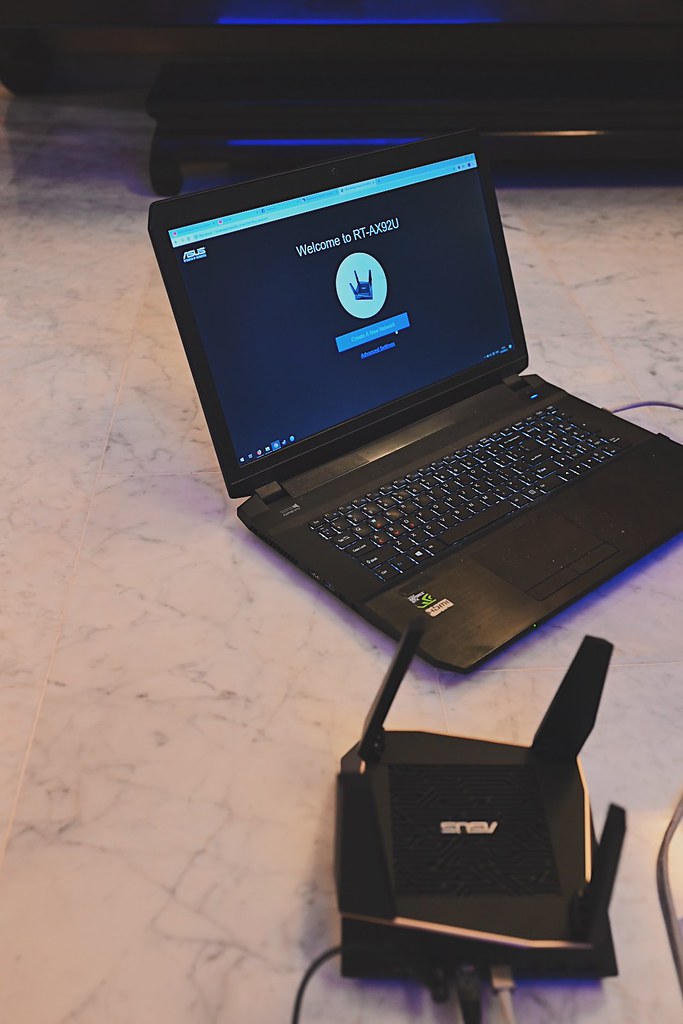 Setting up the Asus – black and gold, which I was seriously loving!

We set up the Asus at Shane’s place first. I have to say that I straight up loved this from the start because of how sleek it looked, and how easy it was to set up. You basically plug it into your (windows) laptop with a LAN cable and set it up the same way you set up any router, by entering your details into a localised page in your web browser as per the little instruction booklet that comes in the box. Once that’s done, you set up your satellite, and get that to beam wifi out to the far corners of your house.

How extenders work is, the modems need to see each other to ‘talk’ to one another. Ideally, there shouldn’t be obstruction between the two satellites, and the prevailing wisdom is to find a spot that’s high up and central in the house. We stuck it on top of the fridge, which was surprisingly the true center of the house. Voila! Extremely, extremely fast wifi in the back two rooms. 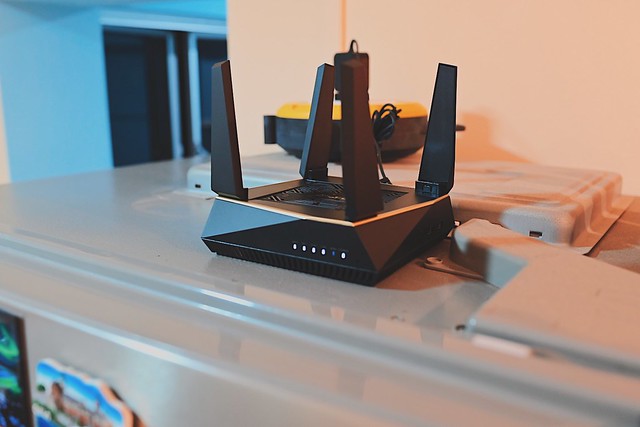 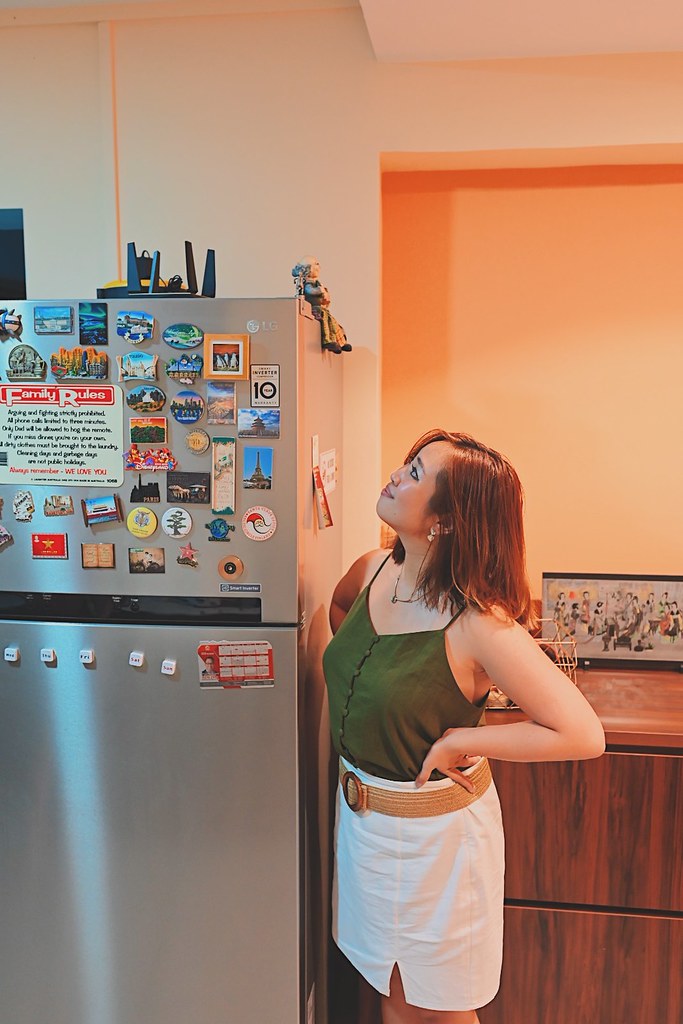 Another option was setting the Asus up in a room where they wanted to set up a gaming point, for example, in Shane or Shaun’s room. The Asus uses both a wired and wireless connection because it has internet and LAN ports, meaning you can plug your TV, Xbox, Playstations, Nintendo switches, and anything else to the ASUS, giving your consoles an extremely stable wired connection, and extremely strong wireless connection for remote devices like phones or laptops!

And then at my place, we set up the Orbi network, including the Orbi Voice.

The Orbi was designed to be an easier set up because it’s an app based installation. You essentially download the Orbi app and follow the steps, and voila. Alas, a delayed voila for me – I encountered a couple of speed bumps setting it up because the app wouldnt recognize my network. This may just be a one off thing, mind, because when I ran a troubleshooting search on the web, there were tons of reviews praising the seamless setup, which eluded me endlessly. Eventually, it took a couple of modem restarts for this to get going, but once it did, the experience was smooth sailing henceforth. 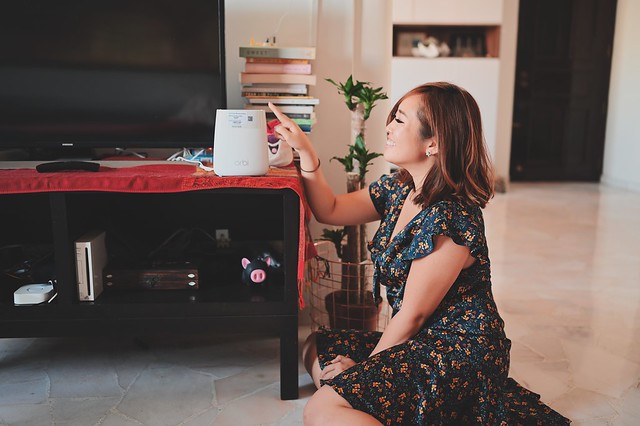 Setting it up on the TV console so it’s a higher, unobstructed point from the floor or under the table. The matte white look really blends it into any modern home quite easily, something I appreciate!

Once you’ve set it up, the Orbi is pretty much the perfect system for families and macbook users. The sleek matte white is very reminiscent of early Apple days, and literally everything is controlled via the app – you can turn on and off wifi access for a certain device (if you want be irritating and prank your sister), change the network name and password, create a guest wifi, run speed tests, and use their Disney Circle on Netgear function to implement parental controls. It also ‘talks’ to you in a very straightforward way – the top of the router lights up in different colors to indicate potential issues. Purple if your internet is down. Green when first powered on. White pulses when firmware is updating. Blue if the connection between the Orbi an Orbi satellite is good. So on and so forth. You can use the Orbi router with regular Orbi satellites or the Orbi Voice satellite, and we went for the latter in my bedroom. 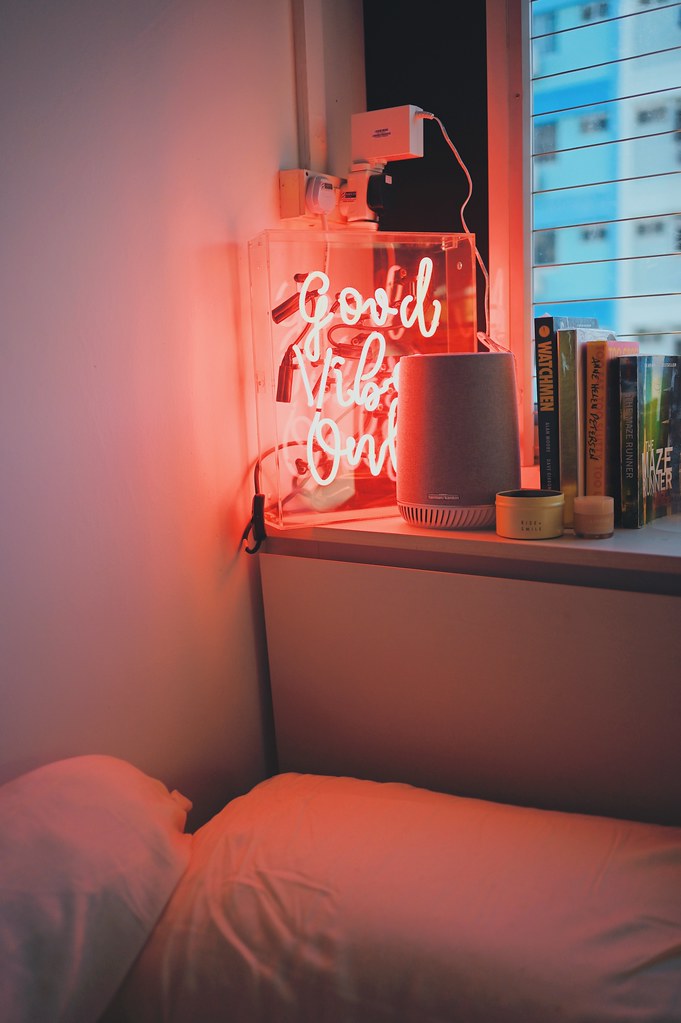 Lulled to sleep by the Lo-Fi playlist on Spotify, hehe

As you can see it’s not meant to be an inconspicuous object at all; it’s meant to be proudly displayed as an integrated part of your furniture. The Orbi voice is also a smart wifi speaker, which allows you to connect your Spotify account and activate on voice command. It runs on Alexa, which isn’t available in the SG app store, so any purchase of the Orbi comes with a workaround guide which is really easy to sort out. Besides radiating wifi, it is also, importantly, a good speaker – Harman Kardon – which is possibly the best speaker we’ve had at home, though all of us are casual music listeners, not people with home cinema aspirations.

Once we had the Orbi set up, I actually grew to seriously love it. Having everything on an app actually made it super easy to understand what was going on and why – for example, if there was a slow connection on one device, I could look at the overview on the app and figure out what was going wrong (usually it had to do with the triband receptors in the receiving device), and just reset it for that device alone. One thing to note though, is that the Orbi only has an internet port, and no LAN ports on the device body. What this means is that you can use the Orbi for wireless connections, but not connect anything wired (like extra gaming consoles) to the Orbi, which is fine for casual internet users like my family and I.

Bottom line: Both of these devices are great for covering wide areas in the house, and ridding your place of dead zones, but:

The Orbi is better for families or mac users (it’s hard to plug a LAN wire into a macbook for setup, so the app setup is best for people who don’t want to deal with the hassle of multiple dongles and wires), as it’s an all rounded product that’s incredibly straightforward to use as long as you know your way around a phone. It will appeal to people who like a clean, minimalistic aesthetic – not just because of its beautiful product design, but also because the wireless set up makes for a less messy house overall, without multiple wires lying around! I also think that it’s especially suitable for families who may want to monitor what their kids access online, or have numbers to how much time their kids spend online – not necessarily to restrict their access, but because it’s important to have mature discussions about responsible internet usage, which the Orbi facilitates 🙂 Plus, it’s a wifi speaker!

On the other hand, the ASUS is better for people who don’t mind wires and are more invested in having good, stable connections for their internet enabled consoles. It’s especially suited for gamers, for example, whether hard core or casual, because it allows you to wire multiple consoles up to different points in your house wherever your satellite is. With the ASUS you could have your PS/Xbox consoles (which run on wired, not wireless connections) in your living room, bedroom, or study, and they would all be super fast and super stable since the wire is a dedicated route that channels your signal bytes across. 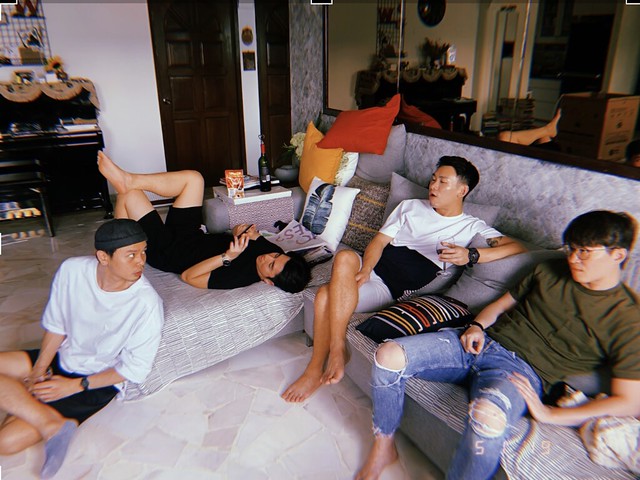 It was amazing how simple it was, like walking through a door. Flaky wifi, good wifi. How could we have lived before this, holding our phones up to the sky as if begging for a connection? I don’t know. Of course, there will be those who see that as a metaphorical parallel to the state of our modern worship-reliance of the cloud and such (it is, quite literally, called the cloud), and those are all fair comments, which I will continue to acknowledge from my point, under the covers, far from the living room router, scrolling and scrolling on a seamless connection before bed.

This post was written and researched in July 2019, and brought to you in collaboration with SITEX Singapore, but all views expressed are my own. Visit SITEX for more details in relevance to the Smart Home and Living Experiential Zone!