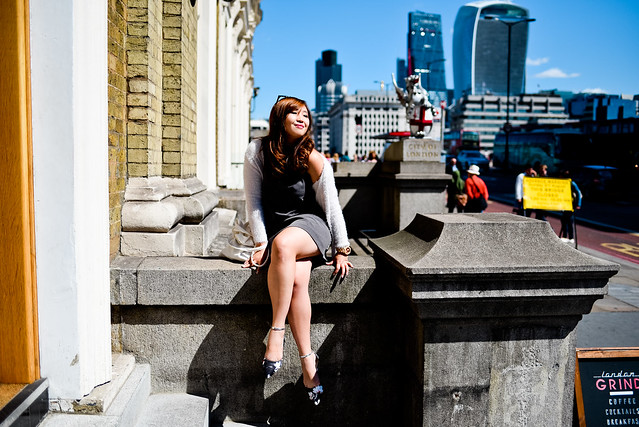 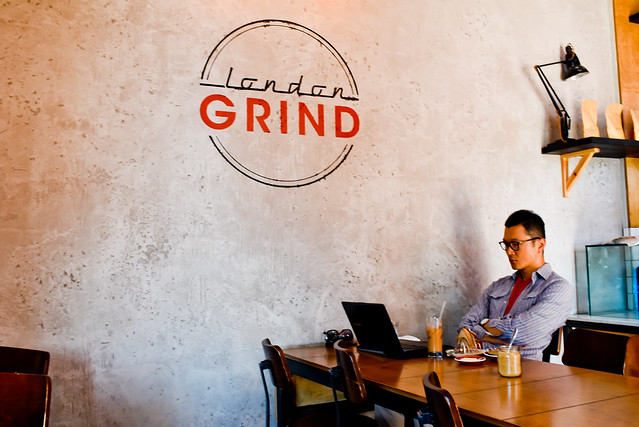 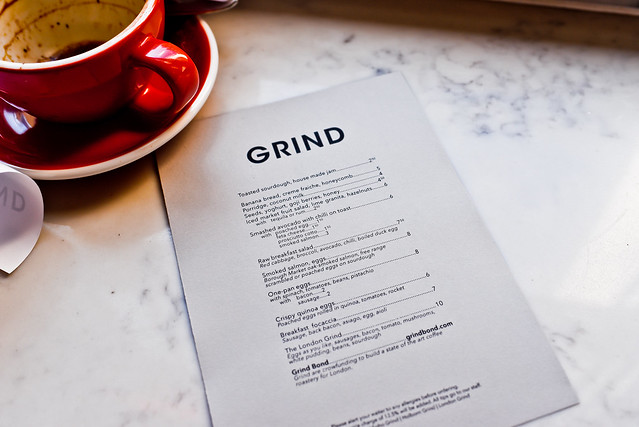 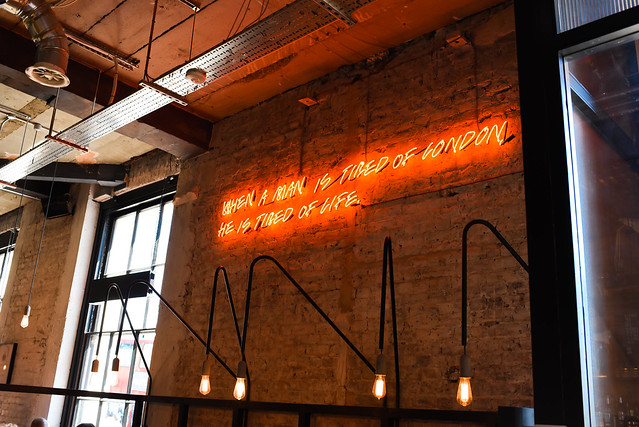 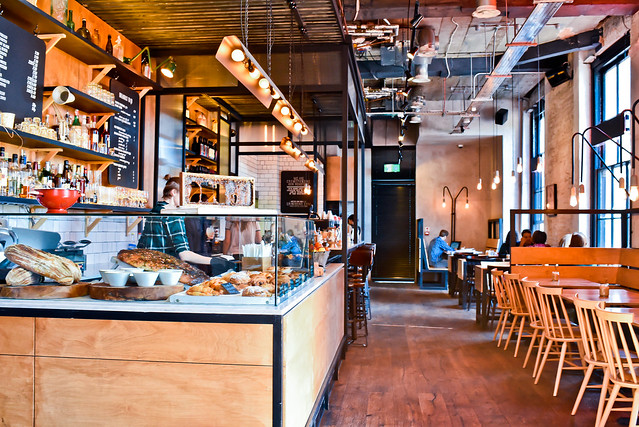 It’s been way too long since my last Mocha Monday, which is a sad reflection of how incredibly crazy life has been… both in terms of time to pen these mocha monday posts and in terms of, well, time to drink the damn mochas. Anyway, in today’s Mocha Monday, we hit the UK for the first time..

London is a bit of a coffee mecca, and a lot of my pre-london hype included squealing over potential cafes to hit. We caffeinated ourselves at a fair number of cafes this time in London, but one of the more memorable ones had to be the London Grind. Located on Number Two, London Bridge, the cafe looks like a hipster exploded in it, but thankfully, unlike other similarly conceptualised cafes, still serves great coffee.

I found London Grind the same way I find most of my cafes while abroad – by lazing in my airbnb apartment and location searching options near me on foursquare. I talk about foursquare so much here that people are going to start thinking I work for them (I don’t). Still, it remains one of my favorite apps to use while abroad, something you guys would already know if you’ve been reading my travel posts (re: Guide to Top five free travel apps). This particular cafe had great reviews and was pretty walkable from our airbnb apartment, so we decided to head over on our last London morning before heading to Bath. 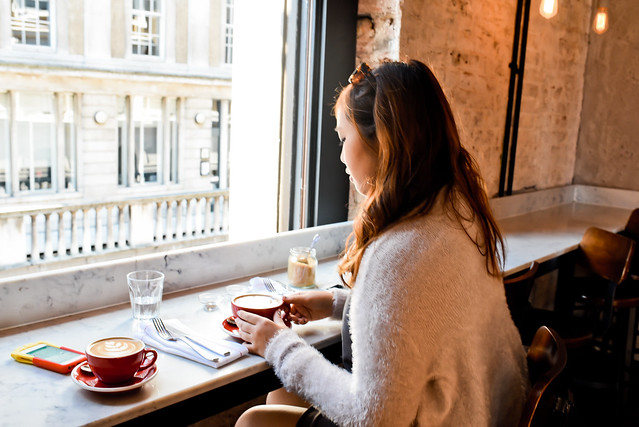 One of my favourite things about London Grind: the incredible window seats offering a fantastic opportunity to raise your creepy people watching street cred.
The cafe, to general surprise, is located on London Bridge itself. We walked past it several times not realising you could go in – it doesn’t have very clear signage, maybe a deterrent to annoying tourists like us? Anyway. Once you actually identify the place, you’re rewarded with exposed brick walls, great natural lighting, marble top counters, and the incredibly smell of coffee brewing. Mmm. We decided to go all out and brunch there instead of just getting a cuppa. The place was too beautiful not to linger. (Idea: a good marketing strategy, perhaps?)

And what a great idea that turned out to be. If the coffee was swoon-worthy, the food was divine. We (over)ordered three dishes to share – Banana bread with creme fraiche and honeycomb, One-pan eggs, and the Breakfast Focaccia. I’m the type to also foursquare food recommendations, so of the three, two were tried and tested by the 4sq community (banana bread and breakfast focaccia), and one was pure adventure (one-pan eggs). Worked out pretty well. Also, I swear, I dont work for foursquare. 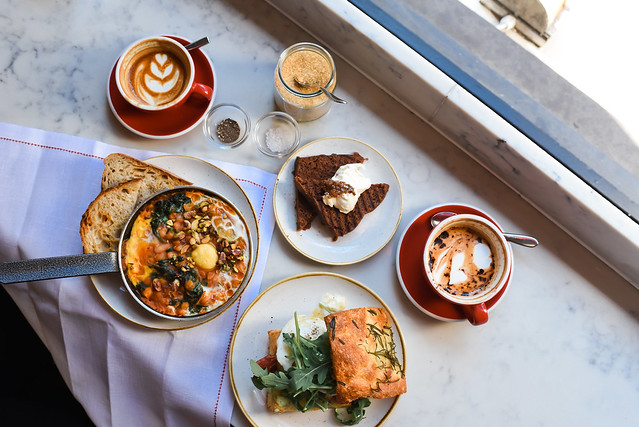 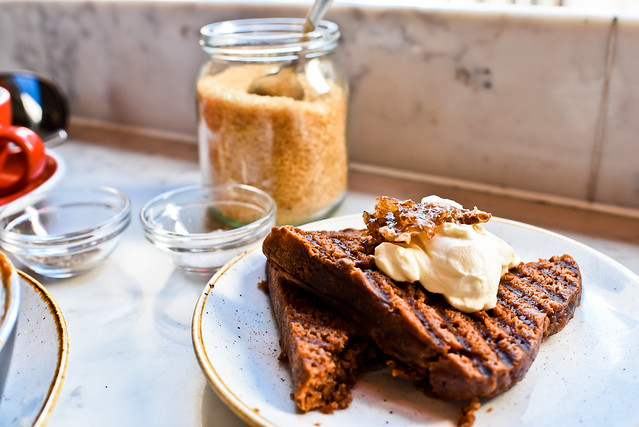 I dont usually do item by item breakdowns but i feel like i havent done a mocha monday for so long that i kinda owe it to the series to whack 1 x good one, plus also this is totally worth it. The banana bread was recommended both by online users and by the barista, and it was incredible. I’ve never had banana bread so light and non-chunky. I had to google what creme fraiche meant – and its the atas cousin of sour cream, and about three times yummier. Plus the honeycomb! Ever since a disastrous date with Seoul’s Milk Cow Honeycomb Ice Cream, I’ve had a mild phobia of honeycomb because I feel like it’s just disappointment waiting to happen – the one i had in Seoul had the consistency of cardboard and tasted like dashed dreams. But this one was soft and viscous and all around delicious. This dish made me wish I could bake (one bakes banana bread, right?) and made me feel incompetent and inadequate. I wish I inspired as much desire in other people as this banana bread concoction inspired in me. 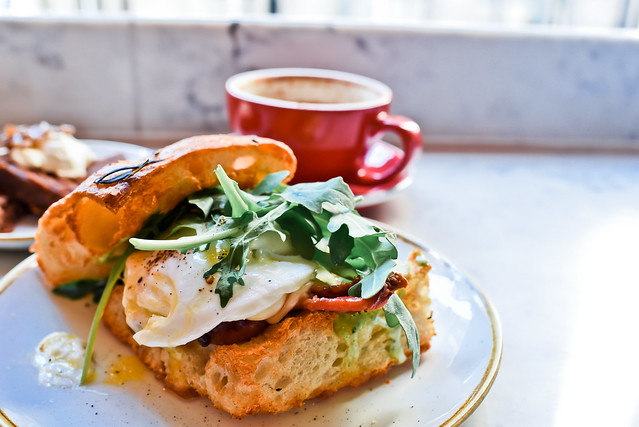 Firstly, focaccia is a funny word and I cant say it without putting on an accent, which is probably very offensive to someone somewhere in the world. Secondly, this breakfast focaccia was so highly recommended by nearly every reviewer on 4sq that even though the other items on the menu looked better, I just had to order this one. It would be a crime not to. Because the internet is always correct, right?

Right. This focaccia made me forget my own name when I took a bite of it. Bite two and I wished it would never end. It was like disneyland in my mouth. I looked at Xiaoqi with my mouth full and made a real effort to mumble: “What is going on?!” She did not understand me.

But seriously, your first reaction to this dish will be the same. What is going on?! Are there drugs in this? Is it possible for food to make you feel so good? Why am I getting goosebumps? Can I marry this focaccia? And then before you know it, it’s over and your life is back to the empty meaningless hole it was before.

The Breakfast Focaccia consists sausage, back bacon, asiago, egg, and aioli, which everyone knows is just another name for freaking delicious. No, seriously though. I have thought about this focaccia a lot in an attempt to understand what on earth happened in London Grind that day. My conclusion is that asiago (a type of cheese) and aioli (a Provençal sauce) are the condiment version of soul mates, and when they get together, good things happen. Plus rocket salad. I trust anything with rocket on it. Rocket is life. 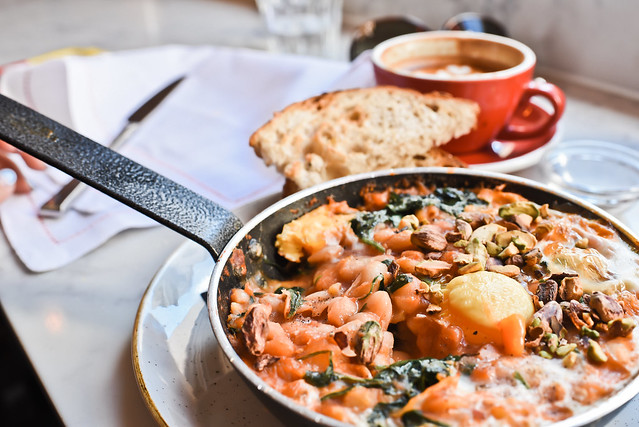 Now, I dont mean to be unfair to this pan. In any other cafe, this would have probably been a really great dish. But in this unholy trifecta, it was the ugly stepsister. The dish contains spinach, tomatoes, beans, and pistachio. I don’t like beans, and I don’t like pistachio. From the start, this was pretty doomed to me. Why did I order this? I didn’t. Xiaoqi did. (Blame the woman!)

I don’t have much to say about this because I didn’t eat the bulk of it, given that i do not like beans. I dont understand why people put beans in things. Do you know that beans make you pass gas? I’m pretty sure I learnt that from a campfire cheer somewhere. Legitimacy not guaranteed. But I do admit that for a dish with beans in it, it made a pretty decent bread-spread. The dish comes with lightly toasted bread, and everyone knows that bread across that part of the world is amazing. The idea is to put the pan mix atop the bread and eat it, but I ended up just eating the bread.

Do not want to give recommendation rating because i suspect i am highly biased, make your own decision on this based on whether you like beans or not. 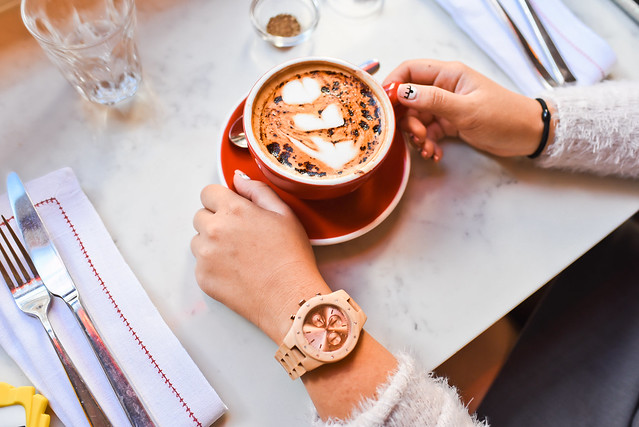 Sidney Rose Gold Watch c/o Jord Wood Watches
So the food was good and the coffee was good. The one thing I found off about the place, though, was their complete disregard of cappuccino latte art, which is an act I found indicative of curious confidence in a time where the instagrammability of one’s dishes are of paramount importance. Xiaoqi had a latte, which came beautiful, but just look at my cappuccino above! It looked like a place where hearts went to die. Yet another case of What is Going On, except this time in all seriousness. Still, it tasted delicious, which means very little in terms of how postable it is. I’ll leave you guys to debate what this means about the state of our generation yourselves. 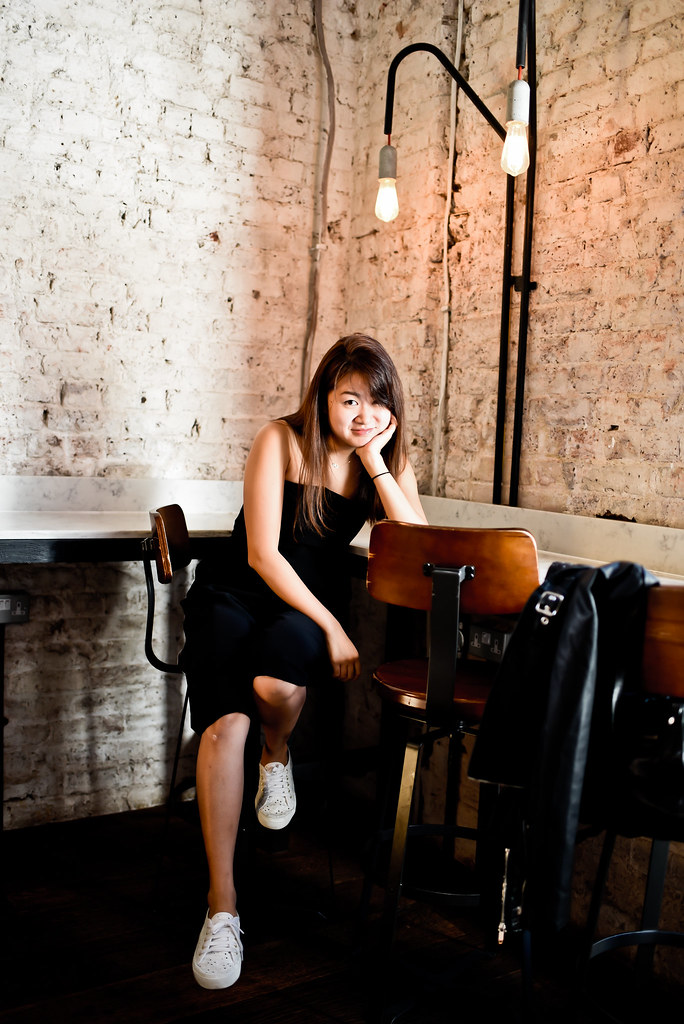 Overall verdict: if you’re in the London Bridge area, there is zero reason why you should not visit this cafe. Start your day here and then wander down the iconic London bridge while singing that song that gets stuck in your head everytime..