Jemimah Wei2022-03-02T08:25:21+00:00April 5, 2018|Thailand|
Whats up, guys. Reporting from Chiang Mai today, a place that has long been on my radar but that I somehow never got to go to. I was there in Feb filming a travel campaign for Klook and Tourism Authority of Thailand, and the destination video just launched this afternoon so I thought I’d pop in and add some notes of my own, for those of you planning a trip there! 🙂
Chiang Mai: In general
A lot of people describe Chiang Mai as a mini Bangkok, which I think is a totally unfair description – Chiang mai has a pretty strong character of its own that isnt derivative at all. There are so many things to adore about Chiang Mai – the vibrant old town, the cool weather (if you dont know why this is a plus point, you obviously have never been to singapore), the fact that a zillion natural wonders are totally accessible via car. When we were younger, Chiang mai used to be associated almost exclusively with OCIP programs and camps, but ever since then it’s gained a lot of global attention thanks to it being a featured movie location in the media, and has opened up to tourists everywhere. Still, it retains a sense that it’s an undiscovered gem (although trust me, it is very, very discovered already) while having the infrastructural benefits of a tourist destination, which gives you a best of both worlds kinda experience.
Chiang Mai: First things first – Things to note:
– Not a credit card friendly city at all, so bring cash.
– Many points of interest are located outside the city center, so if you get car sick easily, bring pills.
– Dress conservatively. That’s not to say that you have to wear long sleeved shirts everywhere, but it’s a pretty conservative city and you’re going to be weaving in and out of temples during your stay, so just be sure to have a cover up or something with you at all times.
– Always bring mosquito repellant. Don’t wait till you get there to buy it, it’s overpriced in Chiang Mai.
– Toothpaste in Chiang mai is SALTY! If you dont think you can handle this (if youre not used to it, it can be very strange), bring your own toothpaste.
Chiang Mai: Arriving
The airport is small, clean, and well located. It’s also a very scenic airport. Our return flight was during sunset, and it was just gorgeous because from the runway we could see the sun setting over the mountains in the distance.

You can and should pick up a SIM card from the airport. I didnt notice many wifi spots during my trip, so if you need to be connected, get a SIM card. For us, we had pre-booked an airport transfer, so the driver was waiting for us with pre-loaded SIM cards.

Chiang Mai: Getting around
Within Chiang Mai, you can walk or take a tuktuk/red truck (the price has to be pre-agreed on, and thus, haggled). Strangely, there are no traditional taxis or motorcycle taxis.

When we were there though, mobike had just launched! There was a Feb special too, like a promotion where the first twenty days were free or something, so we essentially biked everywhere FOR FREE. It was amazing. It was great alternative to walking or cabbing, especially when we were trying to get somewhere that was too far to comfortably stroll to yet too near to justify hopping into a tuktuk. The only thing is, as with all bike sharing services, the bikes are pretty basic, so the steering was a bit funky and I’d only suggest this if you’re relatively comfortable on a bike already. 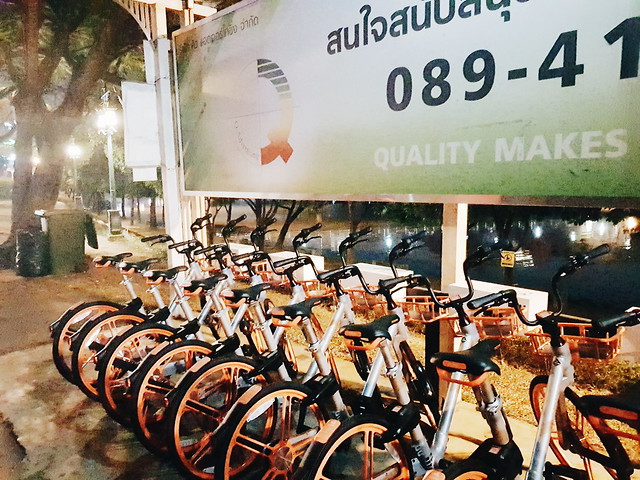 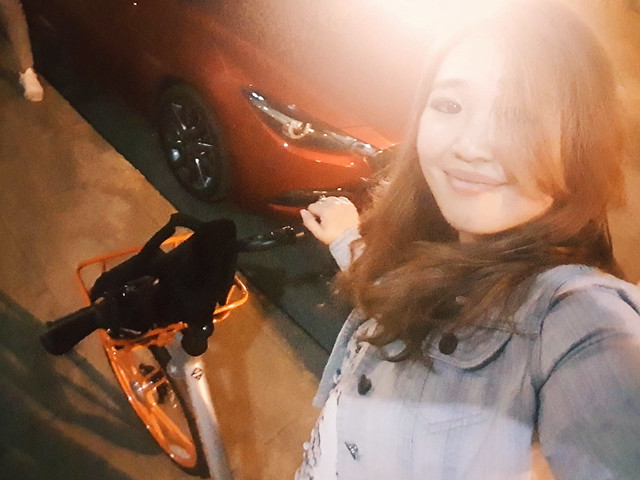 Had to take a selfie to commemorate the moment
Still, a great way to get around the city center!

If youre headed out of the city to waterfalls and the like, you can book an uber, a private car, or ghetto it out by going to the market and seeing if any other tourists want to share a van with you. But that’s only if you have time to spare lah, cos there is no guarantee of success for that method.

However, if you already know where you want to go, chances are you can get a tour that includes entry prices and the return transfer, and they probably can pick you from your hotel/accommodation too. This is actually very similar to booking a private driver and telling them which places I’d like to go to beforehand so they can advise me on whether it’s a feasible day plan or not, which is what I do in places like Bali. The advantage of doing it with a legitimised tour operator is that there’s a guarantee that the operator wont default on you, and also that you not only have the day planned out for you but access to feedback on the same tour via other customers in the comments section. I’m talking about Klook, obviously – they have a best price guarantee, and you can read reviews before booking anything. Then once you book it, it goes into your phone’s app and you can download it for offline and easy access. Technology for the win!

Chiang Mai: Things to do
I think the video actually covered Chiang Mai’s offerings super well. Everything we did was awesome. Watch it, is what I’m saying!

There were a couple of things we didnt get to do because of our tight schedules though, so if i were to return, I’d probably want to do a Mae Kampong Homestay and take a traditional thai cooking class!! We met some Americans on their retirement tour (they were all like, 60, and had biked across the length of thailand, putting us to absolute shame) and they said that their cooking class experience was revolutionary. I super want to take a cooking class but somehow have not had the chance yet. It’s on my list.

But yeah, if I return to Chiang Mai, i’d probably re-visit the elephant sanctuary. I think that was hands down the best thing I did on the trip; I’m probably going to write a post on it soon. 🙂

Chiang Mai: The Classics
As with many southeast asian destinations, there are really great night markets, massage parlours, and affordable bars around. If you just stroll down the river, you’ll see a ton of places that look interesting and that are buzzing with excited locals and tourists. But I do think that unlike Bangkok, youre not guaranteed great experiences whereever you go. I did have a pretty crappy thai massage on my first night, so I started googling and Yelping reviews the rest of the days, and I had great experiences the rest of the trip. Same with food – some places weren’t very good, and some places were amazing. This, along with the fact that so much of Chiang Mai lies outside the city, means that Chiang Mai is really a planned sorta destination – I probably wouldnt just show up and wing everything. Definitely, definitely pre-book your accommodation too, because if you show up and try to check into a random hotel/hostel you might just be turned away.
Chiang Mai: Unexpected hits
The two things I got that surprised me the most: aromatherapy oils and strawberries.

I’ve recently gotten pretty into aroma diffusers because they make your entire room smell like a legit spa, and I got my boyfriend one for christmas too. They really transform the entire vibe of your living space, but damn, those oils are expensive. Imagine, then, my delight when I discovered them selling mega cheap at every corner in chiang mai!!!!! 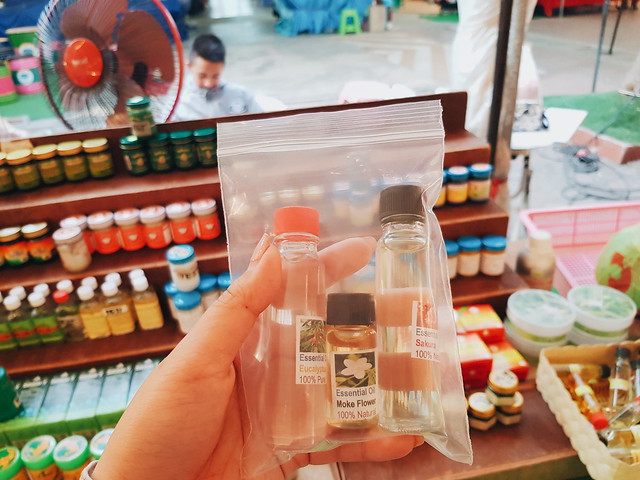 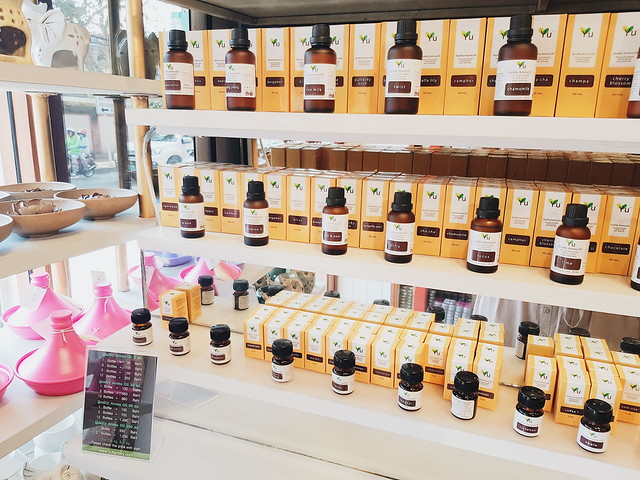 different places selling aroma diffuser oils
Many of these stores sell ghetto bottled oils in a variety of scents, but if you’re unsure about getting it from pop up stores, there are plenty of local brands that make their own oils and have set up boutiques around town. I bought at least 20 bottles of essential oils whilst I was there. The prices ranged from about 60BHT for a small bottle to 250BHT for a big one. That’s like 6 to 10 SGD. In Singapore, these tiny bottles can cost up to eighty dollars, so, SCORE! is what I am saying.

It’s great that the bottles are so affordable. I was an idiot and forgot to bring mosquito repellant, so I bought a bottle of lemongrass essential oil and dabbed it on my pulse points everyday in chiang mai. Didn’t have much problems with mosquitoes after that. If you’re looking out for oils, I also recommend you get at least one bottle of moke flower oil, it’s special to Thailand and the locals are pretty proud of it. It has a pleasant, light scent, and is often used in thai spas.

Please note that not all oils can be used in an aroma diffuser, so let the shopkeeper know if youre buying it for your diffuser and they will point out which oils you should be looking at. 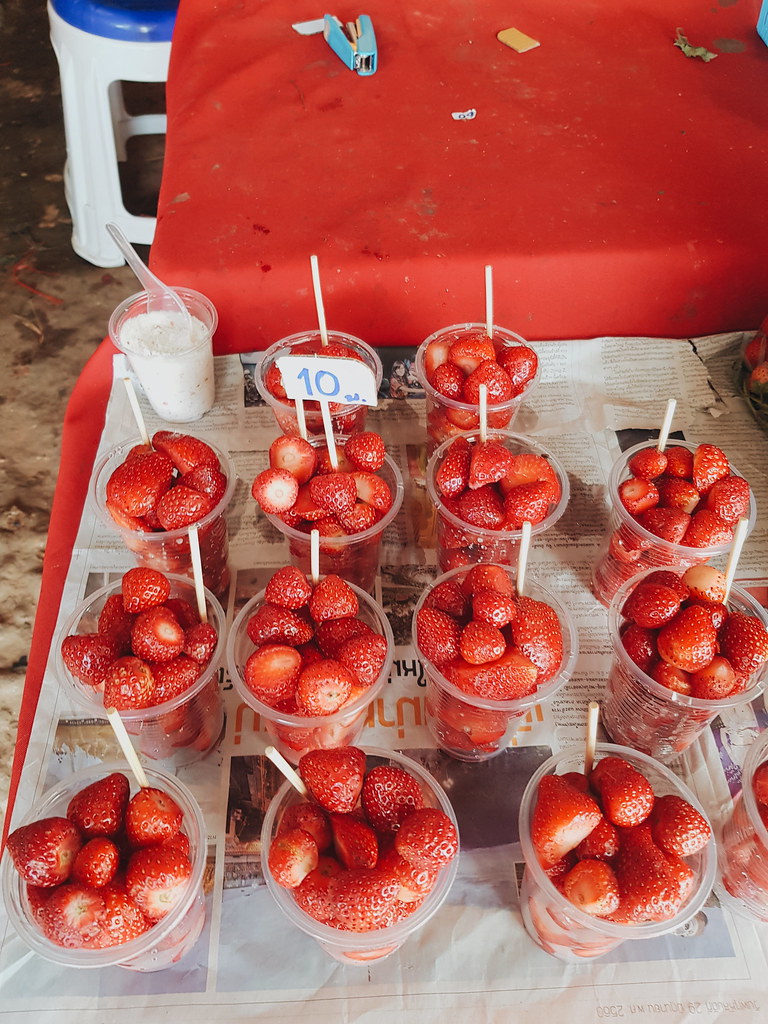 Another sleeper hit from our trip were the amazingly sweet and cheap strawberries. I think strawberries are MAD expensive in singapore because they’re not native to our region, so seeing them go for 10BHT(40cents) was mind blowing to me. I got a cup and they were SO fresh and sweet, and in Chiang mai they also serve the strawberries with this interesting mix of salt, chilli flakes, and sugar, which sounds strange but is incredibly addictive. I bought another cup of strawberries for the road after this, and then bought a giant bag to bring home to Singapore. 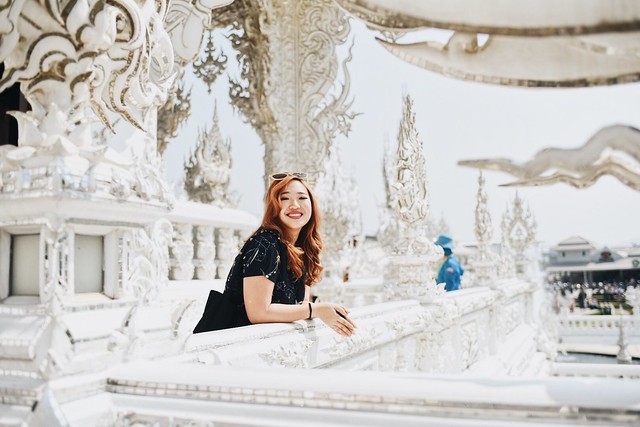 All smiles at the White Temple, which is actually a privately-owned art exhibit in the style of a Buddhist temple. Whaaat? I visited this as part of a longer day tour, linked here.
Alright, I think that’s it for now! This post turned out way longer than I expected, I was actually just intending to share the video and then jot down some personal notes on the city. But I totally got carried away, which happens way too often these days, ha. More activity-specific posts from Chiang Mai to come, but till then, Sawasdee Krab x