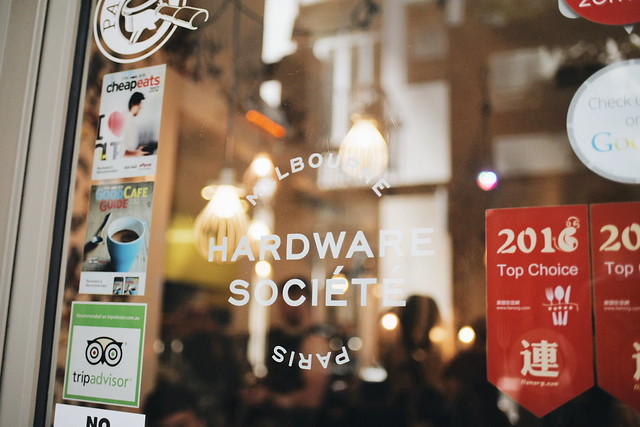 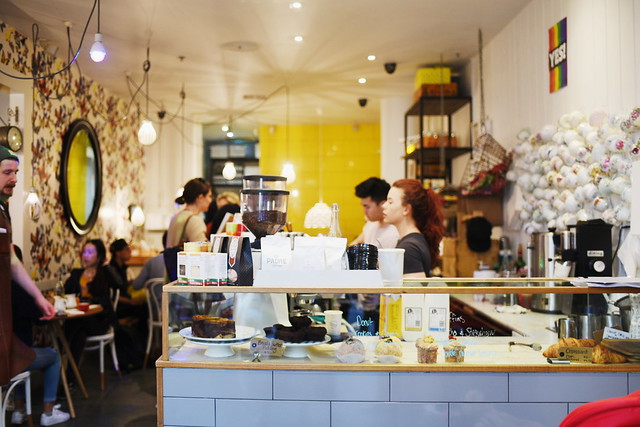 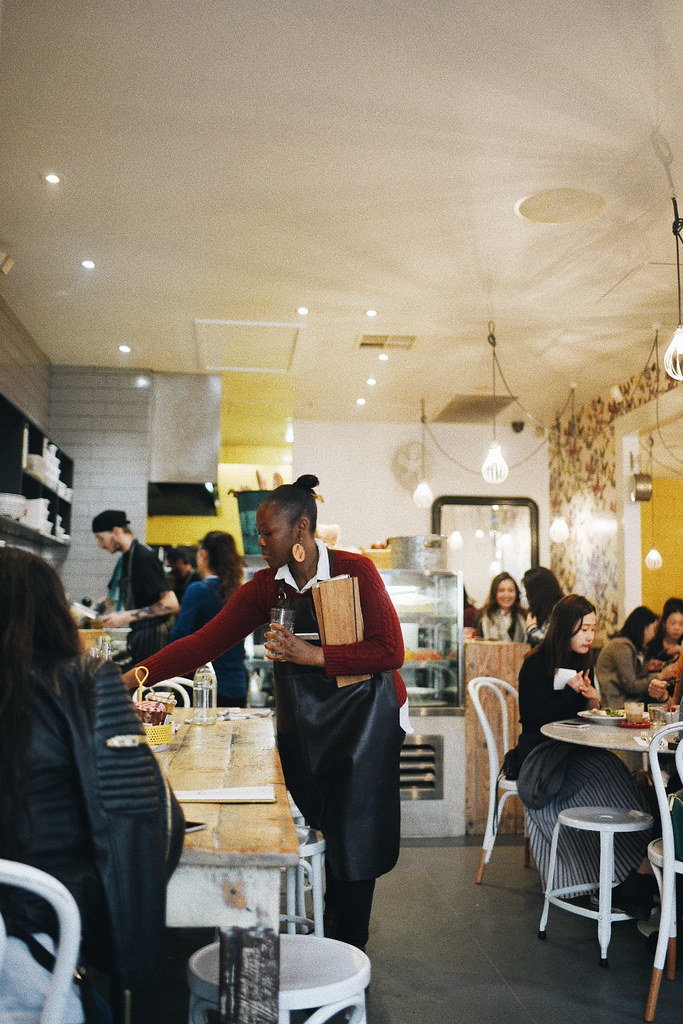 Hardware Societe Cafe, Melbourne
All pictures taken on the Nikon D750 with a 35f1.8mm lens
Day three of melbourne and I am convinced there are no bad brunches in Melbourne. Such a thing cannot exist – or if it does, I suppose it it ferreted away like a secret, away from the critical eye of this city of foodies. Yesterday was such a prime example of this that I now want to go into the cafe business – in an alternate universe where I actually can cook, of course.

Xiaoqi and I found ourselves at Hardware Societe Cafe because multiple people had recommended the baked eggs to us, and I cant lie, I love eggs. I honestly think eggs are the perfect survival food, and if one were stuck on a desert island with only one thing to eat for the rest of their lives, the best thing one could do is ask for an everlasting supply of eggs because they can be cooked like fifty different ways and they are an excellent source of protein and they are also SUPER YUMMY. And that was essentially what lured me in and had me commit to a twenty minute wait for a table, because from what I understand, Hardware ALWAYS has a queue. 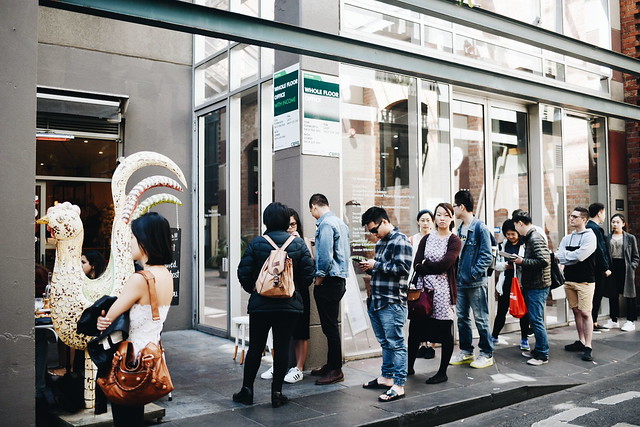 The queue when we reached
We put our names down and had a gander down the adjacent road, then came back just when our names were called, so the wait was actually alright for us. I dont think most people realised they could just put their names down and walk around (we asked), but in any case, you heard it here first!

Anyway, we finally got seated at the alfresco area cos there were only two of us, and we (totally over)ordered what was soon to reveal itself as the best brunch of our lives with the super friendly staff. There is no way to do this elegantly so I am just going to describe what we had:

We started off ordering drinks and a Cruffin. A Cruffin is basically a hybrid of a croissant and a muffin, and this is the second cruffin i have ever had, ever. The first I had was in a cafe in Bangkok, and I wasnt very impressed with it. However Xiaoqi spotted the cruffin in the window of the Hardware Societe counter and went straight for it and thank goodness she did because it was HEAVENLY. 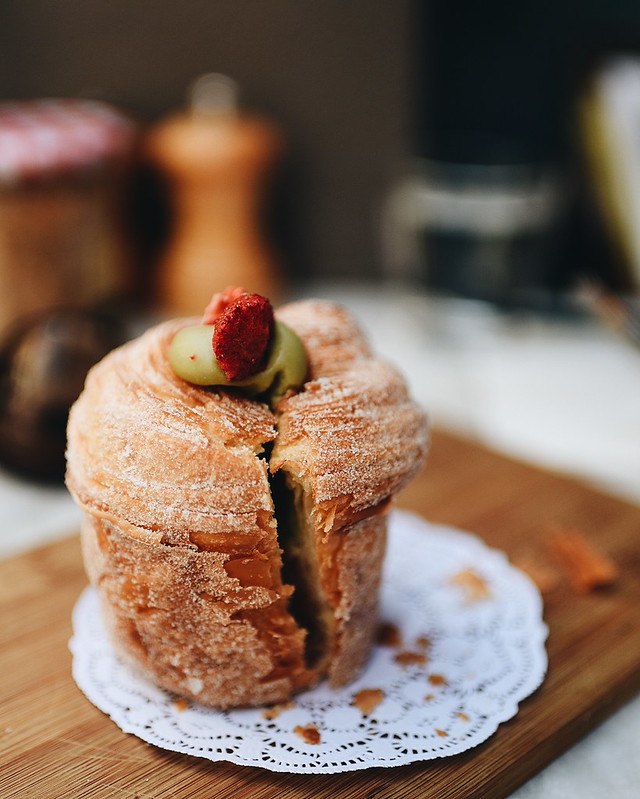 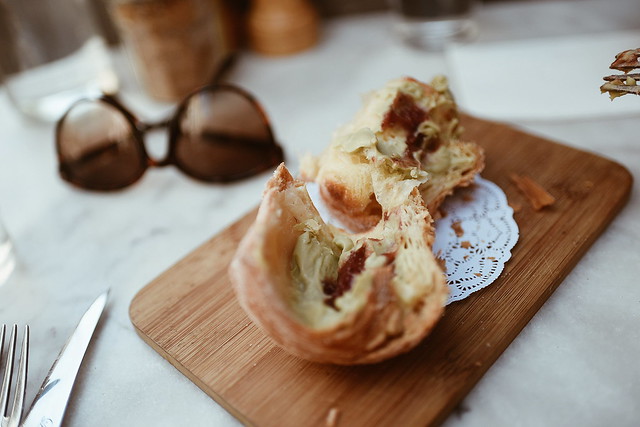 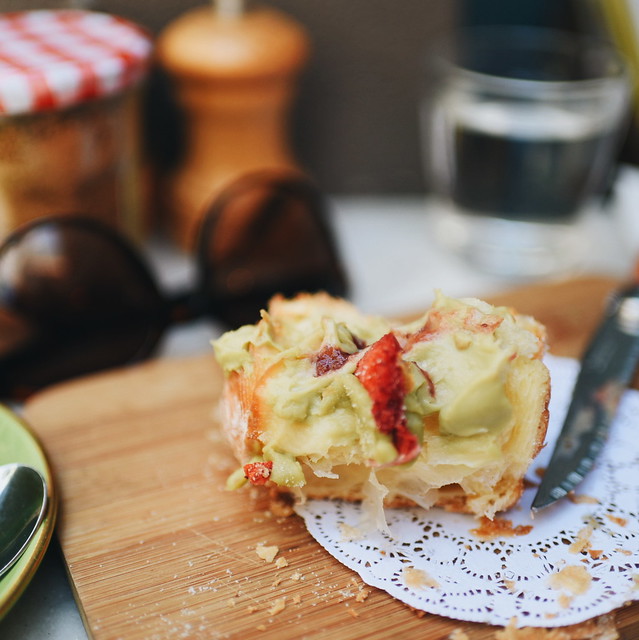 Matcha and Strawberry cruffin
This is the strawberry matcha cruffin which was the perfect mix of fluffy, crisp, and NOT TOO SWEET. The not too sweet part is important, i do feel that too often people make pastries way too cloying, and that ruins it for me because i dont have much of a sweet tooth. But this was really good – the server later said it was the best thing on the dessert menu.

Will I ever have a cruffin again in my life? Can anything ever live up to this experience? Look at that crisp fluff, that amazing dollop of matcha and strawberry.

Two mains: we ordered the famous chorizo baked eggs, and the salmon millefeuille.

First, the baked eggs. They come in two variants, scallop, and chorizo. We got the chorizo cos we were already ordering salmon for another dish, and we thought we should get one seafood and one non seafood dish. The chorizo variant comprised chorizo sausage, potato, piquillo peppers, queso mahon (a type of white cheese), toasted almonds, and aioli, which is essentially atas mayonnaise. 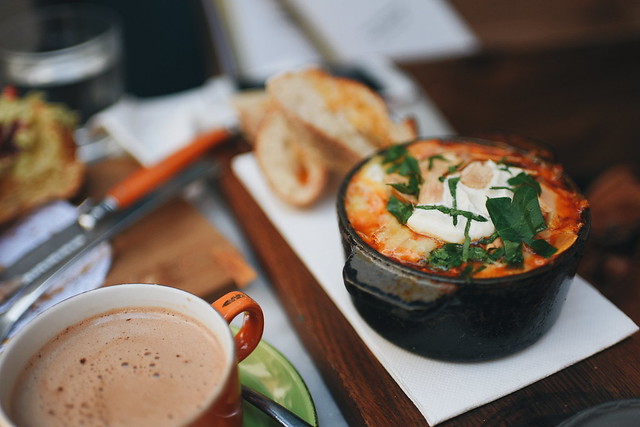 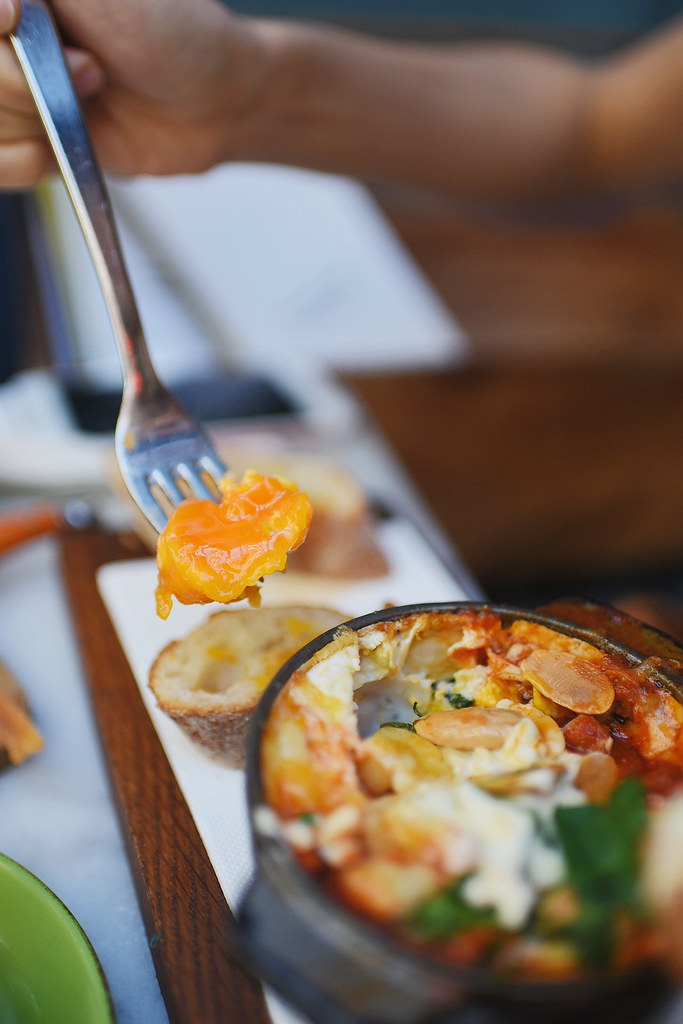 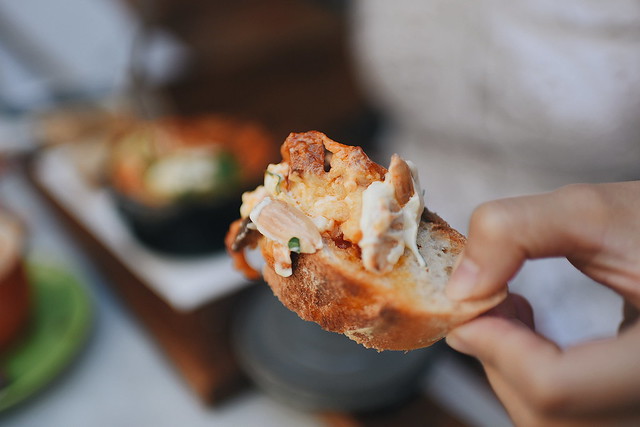 Eggs r life
The baked eggs were pretty ace, but the bread it came with was what really impressed us – it’s the right amount of crisp without being dry, and complements the wet of the eggs perfectly. I particularly liked the almonds in the eggs because it added texture to the dish, and I could objectively recognise that this was delicious – but i just didn’t see how baked eggs with chorizo could differ that much from a standard taste. We suspect the scallop variant might have been better, but limited by money and stomach space, we regretfully did not try it. Perhaps a half and half next time? Still, it was a great dish that raised our eyebrows upon first bite. And we thought, jeez, melbourne. Is there any dish you can’t do?

That was until the Salmon millefeuille came, and we totally freaked. 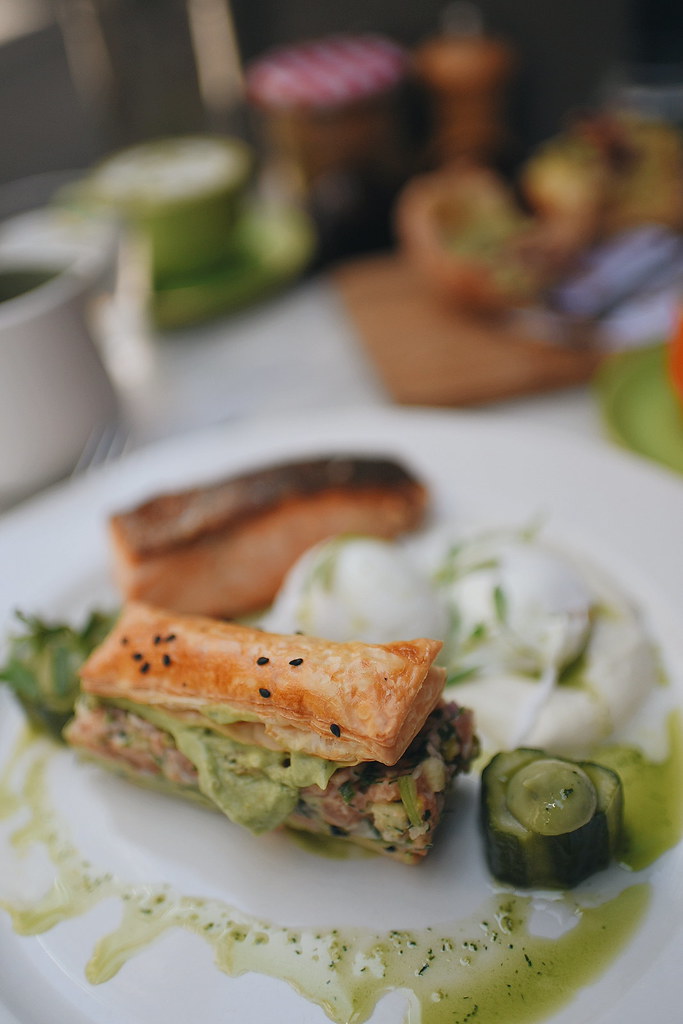 LOOK. AT. THIS.
Millefeuille, in addition to being a word i cannot pronounce, is a type of french puff pastry, which typically has vanilla custard or some kind of sweet paste in it. The combination of that light pastry structure with salmon tartar instead of a sweet layer was a stroke of genius. I am a huge fan of salmon, but I always hesitate to order it while dining out because it’s too easy to screw up and too often I’ve sat, disappointed, in front of an overpriced, dry piece of baked salmon. But this dish came with two forms of salmon and both were perfectly done, and when we ate it it was like everything was right in the world. 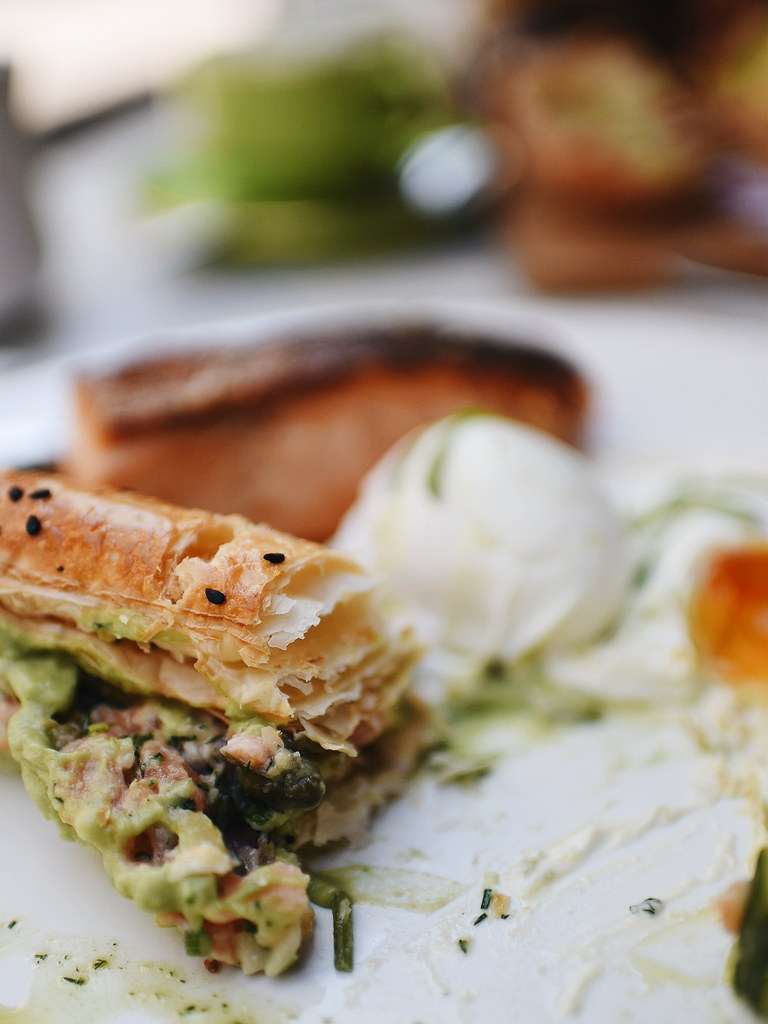 LOOK AT THE CRISP LAYERS OF THE PUFF
Lets talk tartar. The salmon tartar (raw salmon, seasoned) was made fresh – you can always tell when it’s not because it’s slathered with sauce, and fresh raw fish should never be overwhelmed with sauce so that you can taste the freshness – with horseradish and avocado. The horseradish wasnt too strong – i think it might have been pickled actually – and it was served in very thin slices so it didn’t overpower the rest of the dish like i was afraid it might. Basically the perfect balance of this dish was essentially physics. The people behind this are scientists. I am convinced to my very bone. 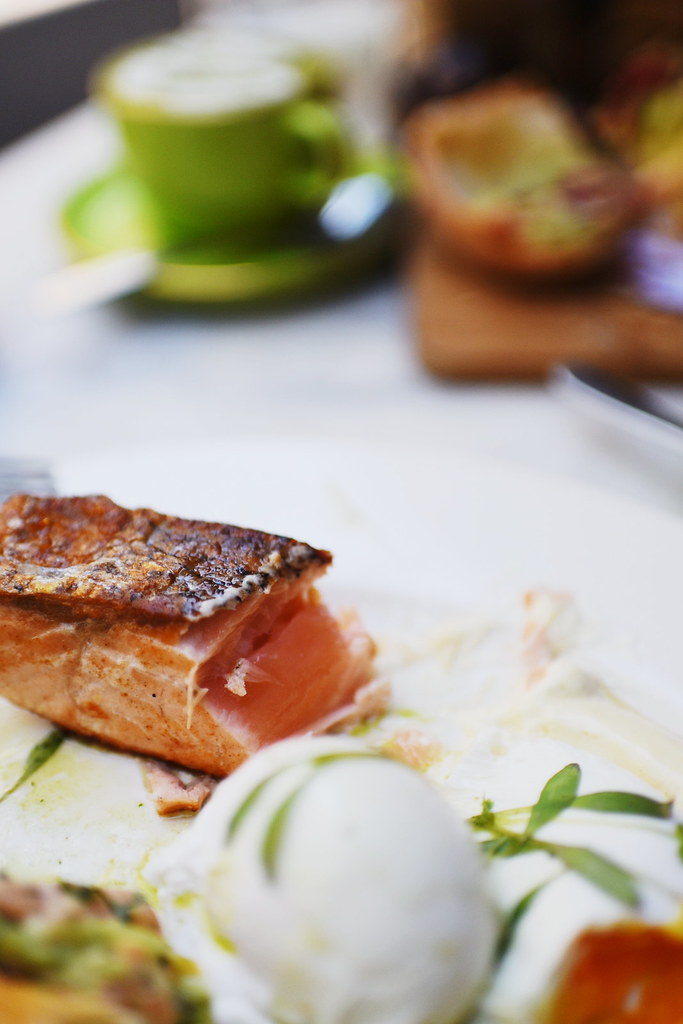 Look at that sear, look at the pink in the middle of the fillet T-T
And the confit atlantic salmon it came with??????? Was so perfectly cooked with the nice pink soft middle??????? I wanted to cry. I wanted to befriend the chef and move into her basement. Do her chores in exchange for meals. Give her a sticker that says Salmon Whisperer. Xiaoqi and I couldnt understand why the baked eggs overshadowed the salmon dish – i literally have heard no one mention the salmon millefeuille dish in any foursquare/yelp review (yes, i am the type of person to obsessively foursquare/yelp a place to figure out what best to order). This dish was the real MVP. After our meal as we walked down the alley I started hissing at random people in the queue ORDER THE SALMON. ORDER THE SALMON. I would have shouted it but i was too full and too shy. But there is no shyness on the internet, so. ORDER THE SALMON.

Finally – for drinks, we ordered the Matcha Maiden green tea latte and the signature hot chocolate mocha (aha! there you have the mocha monday in this mocha monday post) with 54% callebaut. They were individually good, but nothing mind-blowing, which kind of meant they paled in comparison to our food. The matcha is apparently the most popular drink on the menu, and it’s of the non-sweet variety which often means it’s legit matcha, so that’s good, but we didn’t finish it. The chocolate is extremely thick and comprises hot chocolate that you manually pour from a pot into a cup where a dollop of actual chocolate sits, and just based on that you can imagine how thick and rich it is. Pretty good, but again, it’s a heavy drink which doesn’t exactly complement a heavy brunch. No regrets ordering those, but we would have been ok with (free!) plain water too, methinks. 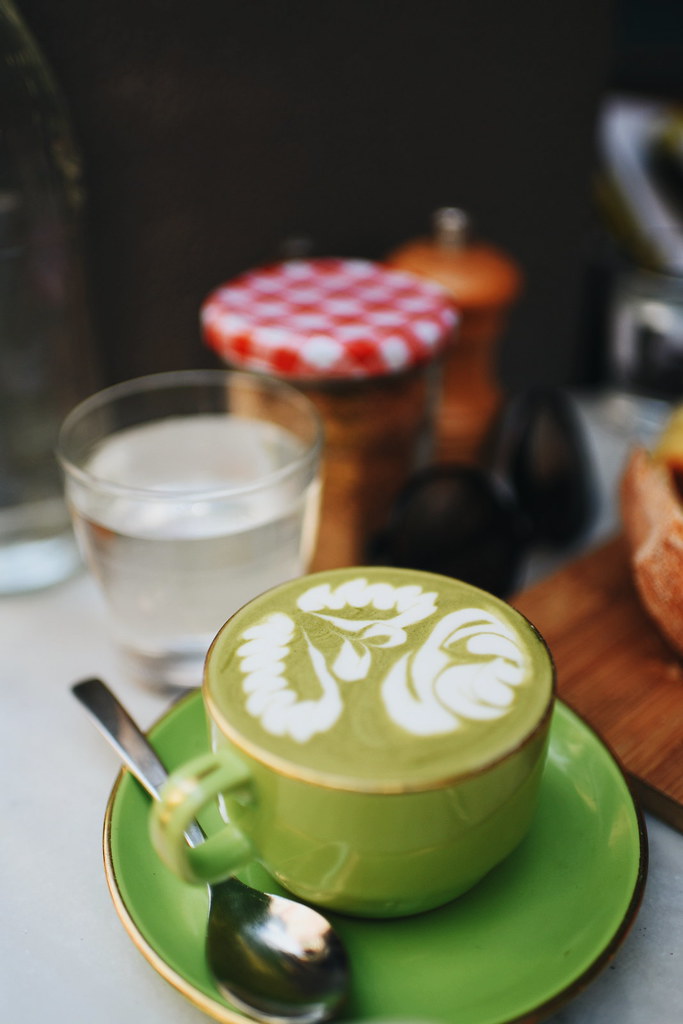 Overall – a fantastic place. I can’t decide if I would come back because the memory of this is so perfect that I’m almost afraid that I will come back, have it again, and not have it live up to the vignette of my experience. In some ways this meal was like that bukowski poem i love – i loved it like a man loves a woman he never touches, only writes to, keeps little photographs of. Straight up, I loved it. Poetry in my mouth, on my tongue. I recommend this so hard.