Just a log of the different things I snacked on in Tokyo. Seriously that place is just full of wonder! You can also read my post on weird things I consumed in Tokyo’s vending machine/conveneince stores here.
Remember – the trick to trying a lot of different things is to SHARE EVERYTHING! Otherwise you’ll be full by 1pm and that’s it for the day. 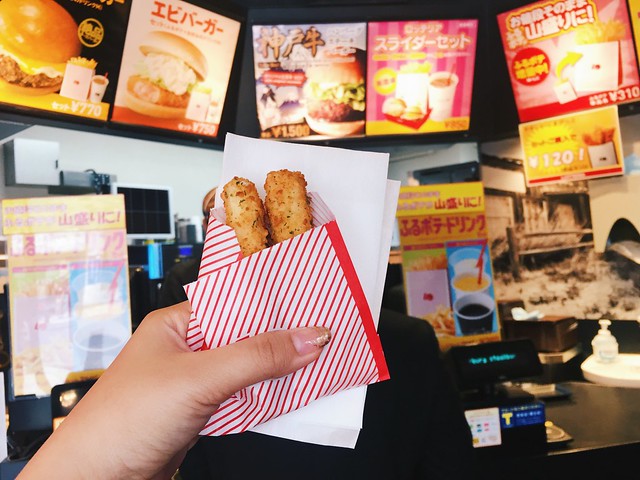 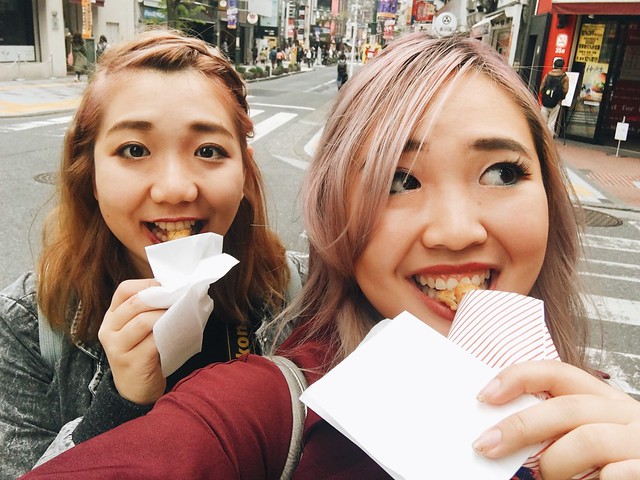 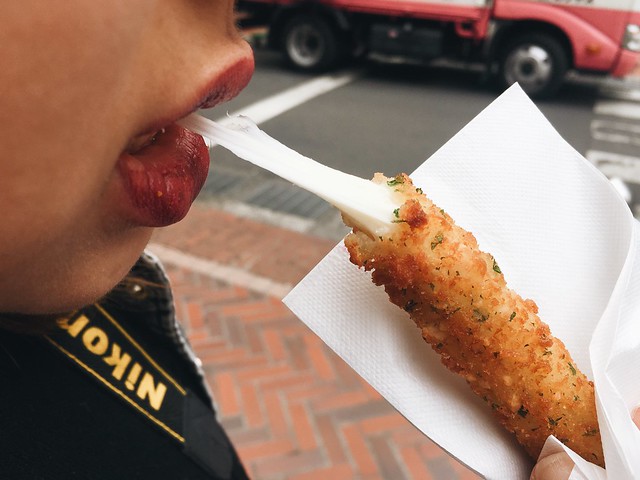 These mozzarella cheese sticks from Lotteria are the real MVP. They’re only like a dollar each or something, I cant remember, and come in a pair. Super yummy if you’re a cheese fan. Just look at that cheese pull! Mmmmmm.

You have to specifically ask for the cheese sticks. Because if you randomly point at anything that LOOKS like a cheese stick, you might end up with a chicken nugget instead, which to be fair, is pretty damned good too… 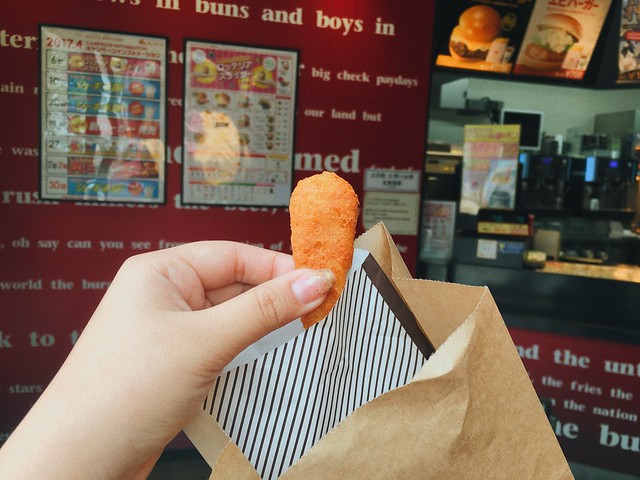 Chicken nugget? Chicken finger? I dunno what this is. But it’s really amazing. Japanese nuggets are really better – though I’d always though Lotteria was a korean chain, thanks to Lotte world in Seoul. It was only when I googled it that I realised it’s actually originated from Shinjuku?? And even funnier – the wikipedia page throws a heckload of shade on McDonalds because it says that Lotteria invented the shrimp burger which MCD COPIED. HAHAHAH. Hilarious. 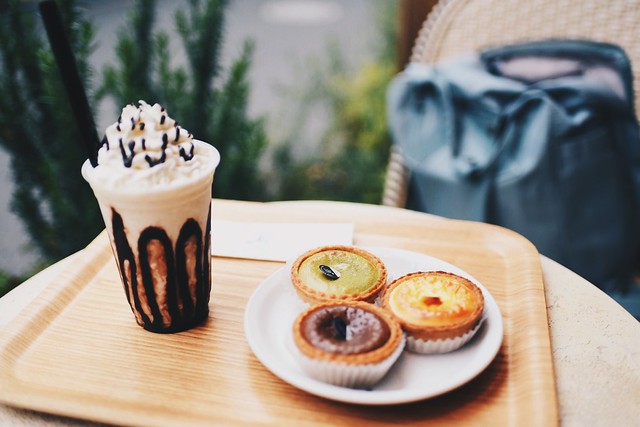 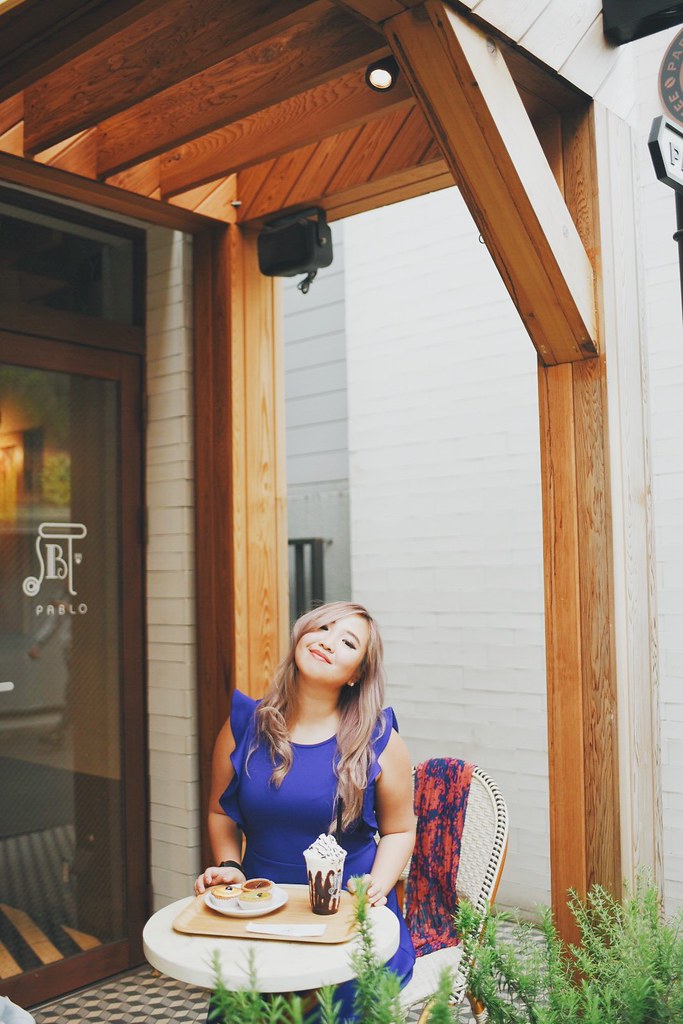 Pablo’s cheese tarts! The original cheese tarts I think. Its my fourth time in Japan but first time trying the tarts because the queues are always so damned long. But for some reason it was super empty this time – maybe it was the hour that i went? The Pablo cafe in the tiny streets of Harajuku is a really pretty one too, all wood and natural light. But we’re not here to talk about interior design.

The three tarts I tried were matcha, original, and chocolate. Matcha was the best of the lot, really impressive although I’m not the hugest matcha fan! Original wasn’t too bad too. Chocolate was just.. chocolatey.

And don’t bother with the shakes. This is banana chocolate which I would NEVER order on my own cos it sounds way sweet, but my sister bought it and immediately regretted it. So super sweet.

I tried the Hokkaido BAKE cheese tarts in Tokyo too, out of this stand at the Shinjuku train station, but didn’t take a picture of it. Not bad! But wouldnt queue an hour for it, thats a bit nuts i think. 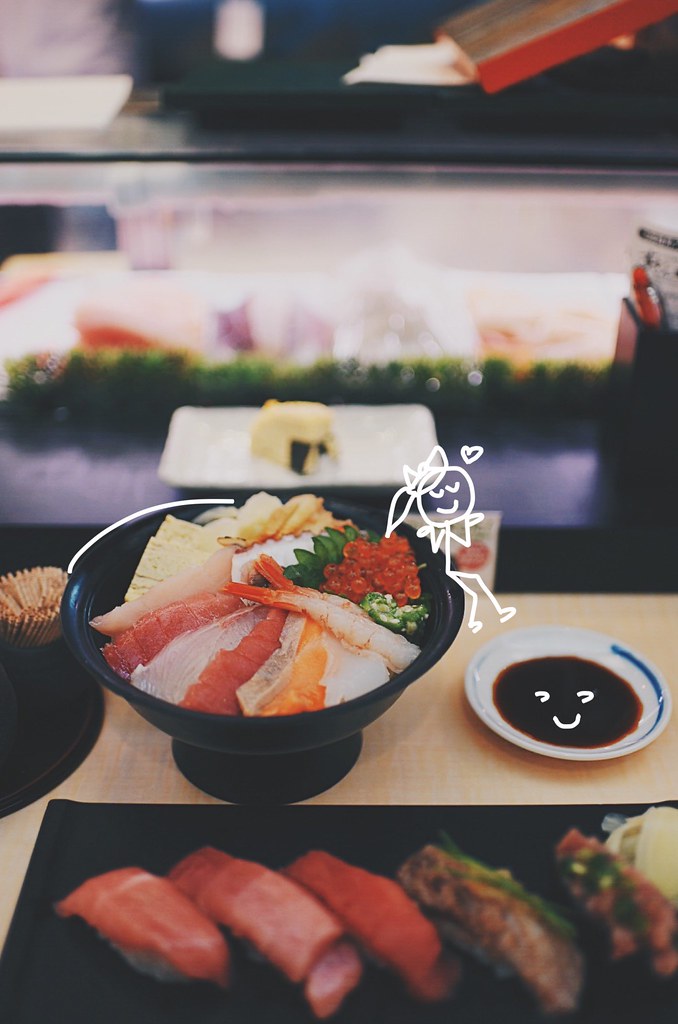 I don’t think this is really considered a snack but Sushizanmai is open 24 hours and there is one smack in the middle of Shibuya! So if you have a midnight sushi craving…

When in Sushizanmai, order the Chutoro. Don’t ask, just do it. That shit it amazing. It melts in your mouth like butter. I got the tuna set (five types of tuna) and although everything was good, I actually whimpered when I tried the Chutoro. Then I went back and ordered another four more because I couldn’t get over it. SO AMAZING. SO AMAZING!!!! 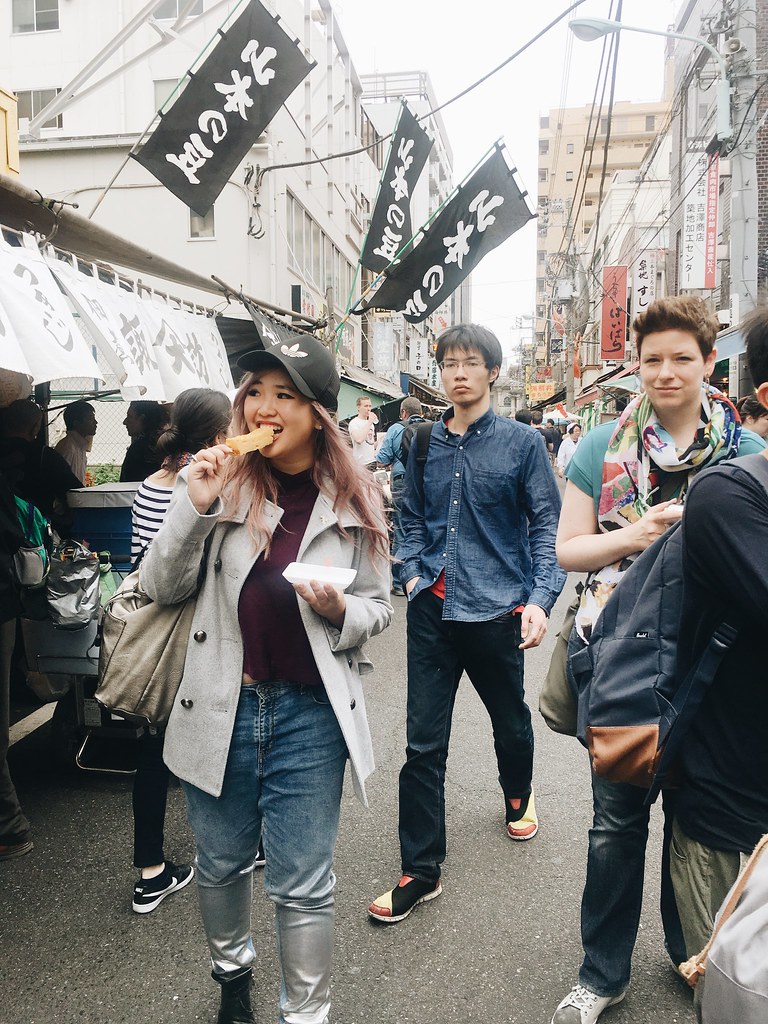 This is the 100YEN egg stick that I love to get form Tsukiji market! You can get it near the entrance of the market, and you’ll know which it is cos its at the corner of a line of shops and theres a whole set up where they’re flipping eggs in front of you.

This is the sushi egg that you get, tamago, but on a stick. You can get it plain or with toppings, but I always get it plain because it’s fantastic just the way it is! 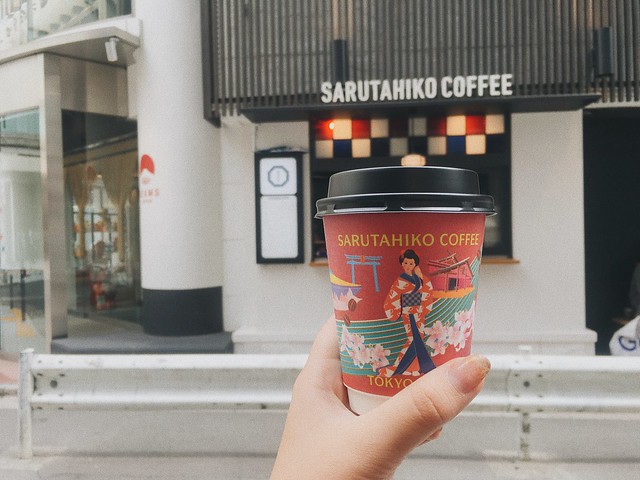 Quite like this coffee. It’s from this little stand in Shinjuku, part of the BEAMS TOKYO department store. Their specialised coffee sells out pretty quick though, but after that sells out you can still get regular coffee.

Doesn’t hurt that the packaging is so pretty! 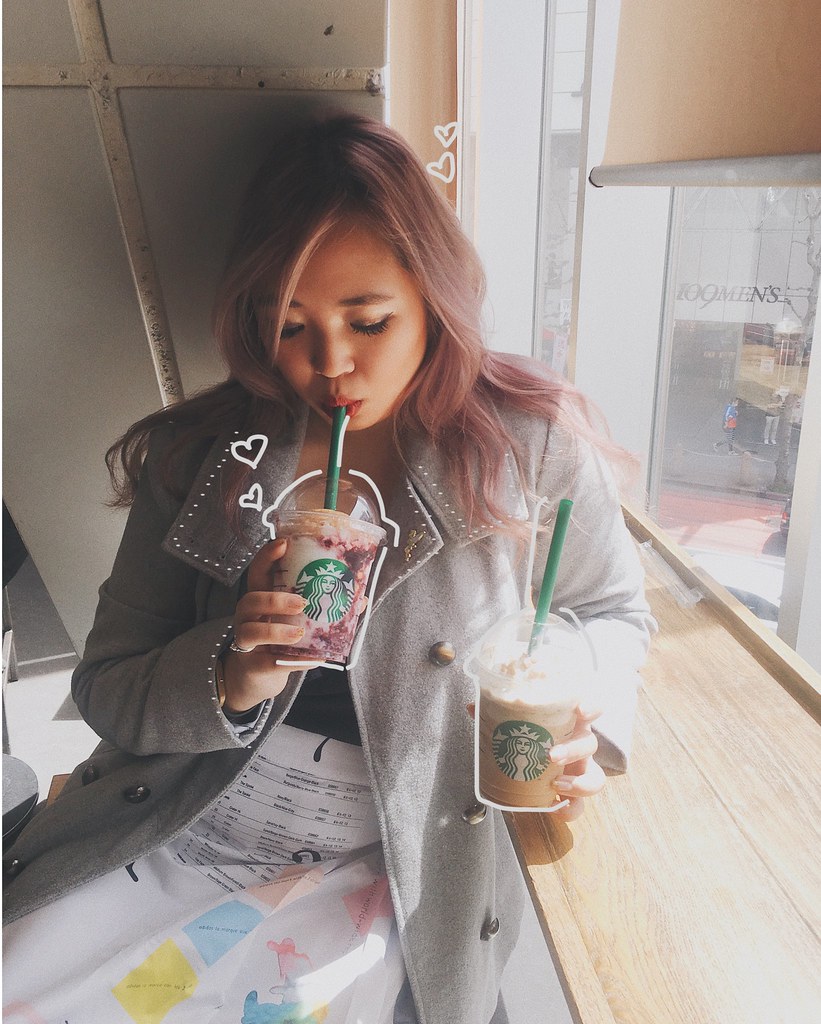 I also always try the seasonal starbucks flavours whenever I’m in Japan because somehow they always get all the cool flavours that we don’t get anywhere else. Here’s the cherry pie frap – it was pretty yum, especially if you like cherry. It comes with this crusty top as well. But the cream tea frap (which isn’t a japan exclusive) was better – just more caffeine, I guess. I’m still a coffee girl at the end of the day so my favourite thing to get at Starbucks is the cold brew. It follows that all flavoured drinks gain favour with me if I can taste the coffee in it. x 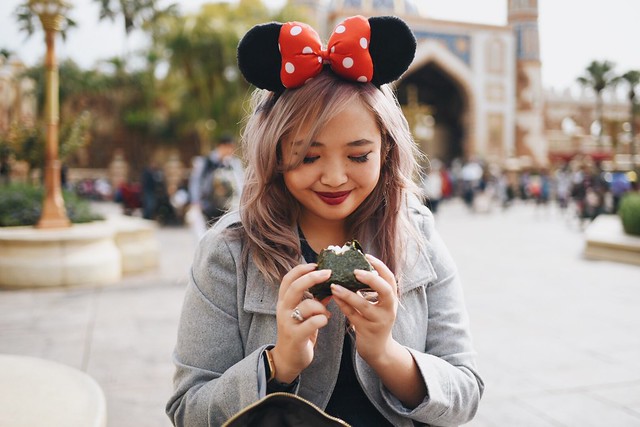 And obviously, onigiri. I love all Japanese onigiris cos the rice they use is so damned fresh and yum! Love. Tuna is still my favourite because I’m super basic but other than that I quite like the fried rice variant and the ones with eggs in the middle heh.

Ok thats it for now. More to come!