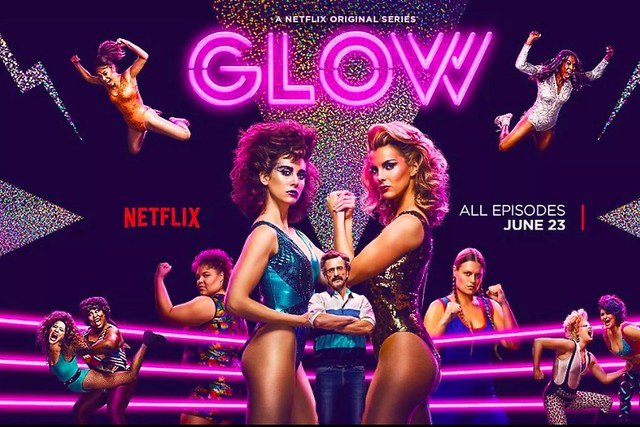 The second season of GLOW (Gorgeous Ladies of Wrestling) dropped on Netflix a couple of weeks ago and my word it is excellent.

I fell in love with GLOW last year – it was released quietly (relative to other Netflix originals like Stranger Things or 13 Reasons Why) but quickly gained a loyal following for its 80s-rewind retro vibe, fresh concept, and satirical take on showbiz and women in hollywood. The show follows Alison Brie playing Ruth Wilder, a failed actress who auditions for a new women’s wrestling reality TV show called GLOW. The season chugs on at full speed as the cast of diverse actresses hired to play the worst stereotypes of their racial profiles come together and try to film a successful pilot episode, and there’s a lot of glitter, hair spray, and chokeslams. But the real heart of the show lies in the conflict between the two main leads, Alison Brie’s Ruth and Betty Gilpin’s Debbie, long time best friends who fell out because Ruth slept with Debbie’s husband (twice).

Season one establishes the story in a fun and dynamic way, but it never loses sight of the fact that sequins and spandex aside, the story is about the fractured relationship between the two leads. At the end of the first season, after a successful show, Brie asks Gilpin out for coffee, only to be rejected. “We’re not there yet,” Gilpin says, and it’s disappointing, but realistic – a splinter that deep does not get redeemed over the course of one season, closure be damned.

So, season one was great. I would have been ok if it ended there. Second seasons are always dicey, and I didnt think GLOW needed to risk undoing everything with a sequel just for the ratings. But I am so, so glad it got renewed, because the second season is even better than the first.

Season two is not perfect – ambitious and consequently uneven, but it is stunning in its efforts. 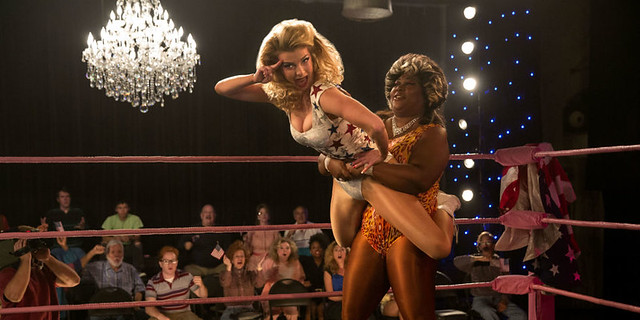 One of my favorite episodes in season two centered around the relationship between Gilpin and Kia Stevens, who’s ring-persona is the offensively titled Welfare Queen

The female friendship between Brie and Gilpin was the anchor of season one, and in season two it is explored even more painfully. It reminds me of Ferrante’s brand of female friendship, one that is not afraid to explore the toxic and competitive tension between women, one that poses realistic yet difficult questions. It is to the showrunners credit that we are never truly able to take a side – because the characters are both so flawed, so deeply real, that you cannot help but empathise. This anchor branches out throughout the season to comment on the modern #MeToo movement, the way female power in the workplace is framed by male authority, the struggles of balancing motherhood and career, and the commodification of women in hollywood.

But beyond that, season two wrestles with larger issues like LGBT acceptance in the 80s, child support and teenage relationships, and it even manages to work in an arc about AIDS, which is present without being ever mentioned explicitly. That is a lot to take on for a ten episode season, which results in aforementioned unevenness. But the attempt to fully flesh out every topic they touch on as well as give all the wrestlers more back story, more show time, more character development, is so earnest that one can forgive the occasional missteps – which occur primarily in the show’s pacing, and not the actual storyline anyway.

It’s sobering that the issues faced by the characters in the 80s are still so relevant to the world today in 2018, and perhaps that is kind of the point. It’s kind of amazing that despite dealing with all these huge issues, GLOW never turns preachy (a problem Orange is the New Black, also by Jenji Kohan, suffered from in Season 5). Instead, it tackles them in the best way possible – by acknowledging the issues, slapping some glitter on, then jumping into the ring with them. The result? Taking season two into account, GLOW is now one of the best shows on Netflix. Watch it.

Season Two of GLOW is now streaming on Netflix.