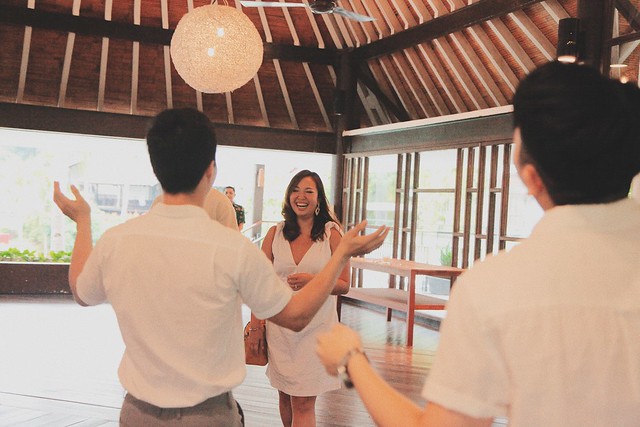 It has been approximately two and a half weeks since I have been engaged. In this time what have I done, I have changed my phone’s LCD screen, I have watched a play (Three Fat Virgins Unassembled by Theatreworks, described as such – virginity is not a state of the hymen, but of the mind), I have aggressively karaoke-d and also crossed the border with my family to play laser tag. My mother has been revealed to have zero compunction shooting us all in the face, which was predictable, but not as predictable as her pre-game spiel on how family should keep peace and how can we expect mother to shoot daughter and husband to shoot wife. Tugging on the heartstrings of the guilty she has come out top in all games we played. I see you, mother. I see you.

In all days except the monday of this week I have seen my ex-boyfriend who is now my fiancé which is a thing i like to say to throw people off. But throwing people off is one thing; I feel also, like i have been unbalanced in the days after. For example I have been regarding the word Engaged with some kind of curiosity. Engaged when employed regularly means busy. Busy, occupied, unavailable – the meaning of that last one pivoted to mean also, betrothed. It is funny because the primary meaning of the word is the opposite of what i have been. Ever since i have entered the state of engagement I have been anything but busy. I have been sitting around reading and also doing a lot of oversleeping. I missed a whole week at the gym because excuses. I have been afraid of my email. I have had my hand grabbed and examined more times than ever in my life. I have forced myself to work but felt unable to form an emotional connection to my emails. Again with the emails. I have so many emails. I used to feel so attached to my email but now that the attachment to my ex-boyfriend-now-fiancé has increased it feels like the attachment to other things have decreased. I opened three good emails and one bad one this week, the rest were more or less neutral. It sounds like a positive ratio but I dont know. I should feel more engaged with my real life but I have instead been infected with lethargy. When I have the lethargy i also historically make space for paranoia. So now I worry about things like crossing the road and the BULLISH MARKET that my phone’s news alert told me about this morning and also about my water intake. The sum total is a plus because I am very happy to be engaged to one of the people i love. But it feels like a weird trade-off that now i suddenly worry about the birds that have gotten into the recent habit of shitting all over my office’s window ledge. The ledge has always been there but the birds have only discovered it recently. We put some spikes on the ledge but whether or not this will be effective remains to be seen.