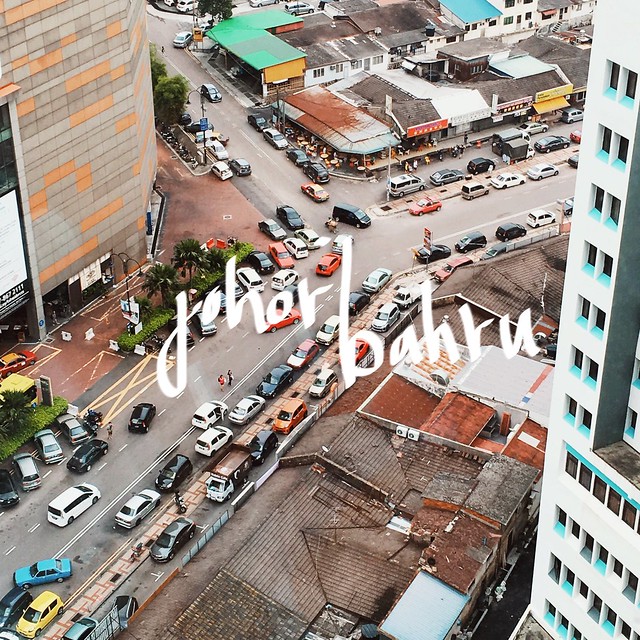 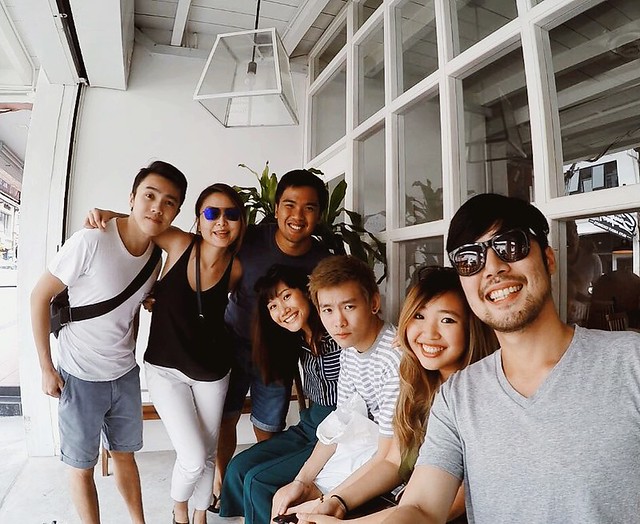 Johor Bahru, Malaysia
In the spirit of spontaneity and youth, a group of us made a trip down to Johor Bahru earlier in the week. Somehow or other, I have survived twenty three years a Singaporean without ever having made it to JB, because I have no idea why. Anyway. As a first timer in JB, all I did, really, was follow my more experienced friends around. But so many of you have requested details on the trip that I decided that in the spirit of Christmas, which is of course nowhere near, I’d cobble together a post on JB. If none of that made sense to you, good! Know that it is the same for me.
Getting to JB
You can now take a bus to JB, which is what I did, from Yishun MRT. It’s a bus service called AC7, all the way at the end of the bus interchange. It costs $2.50 per ride, and you can use your ez-link card but not a paywave ezlink. The reader doesn’t register it. So if youre using a bank card as your ezlink, just pay cash for this trip.

The bus takes about twenty minutes to cross the causeway, and you pass customs, and tada! You’re in JB. The minute you get off the bus, you’re at Citysquare Mall, which is where you can do some shopping, or a massage, or whatever, if youre on a daytrip.

You can find other ways to get to JB here. 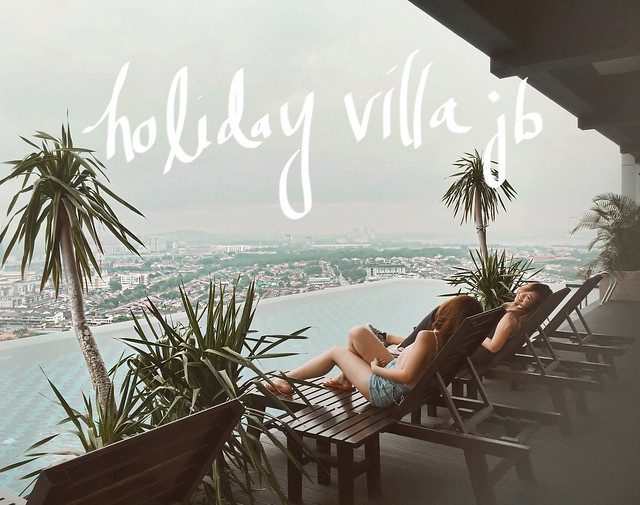 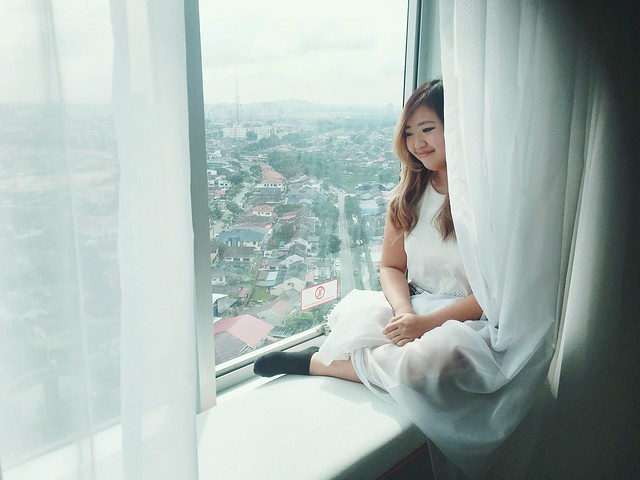 There are a bunch of hotels near the customs, but the one we stayed at is called Holiday Villa. It pretty much feels like a four or five star hotel. Ok, maybe a four star hotel, because they dont have bathrobes and the wifi is awful from the hotel bed – the nearer you are to the hotel corridor the better your signal is. But it’s only SGD50/night per person for a 2 people room, so honestly, no complaints.

Plus it comes with breakfast and a sick infinity pool!! 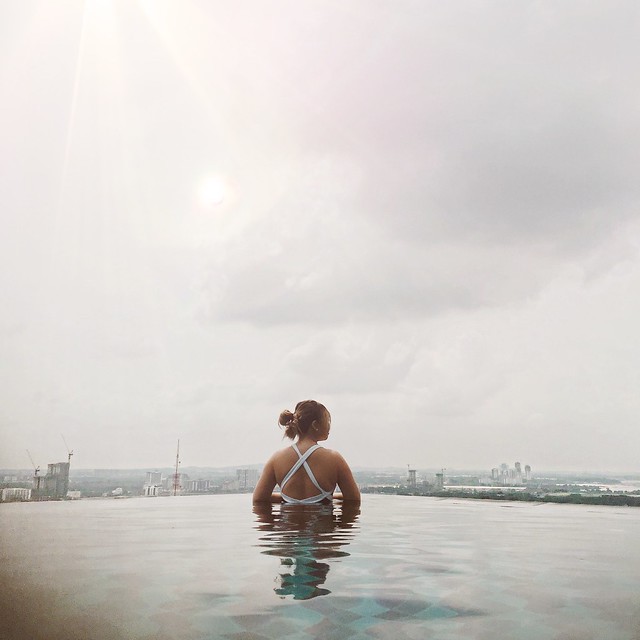 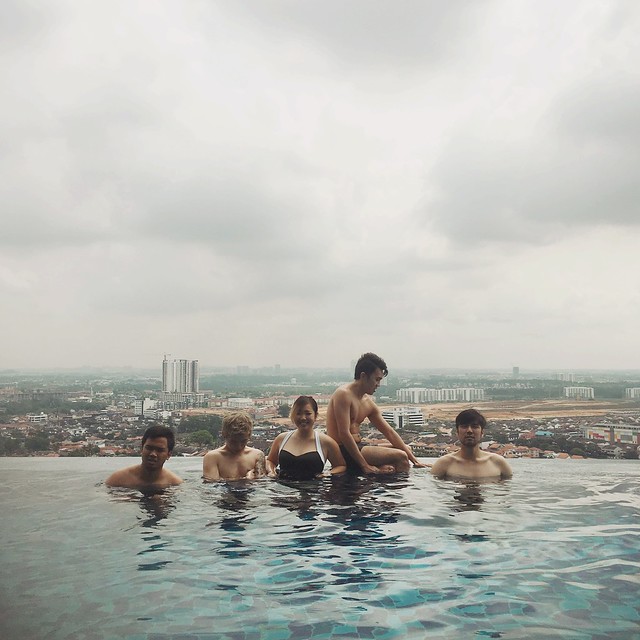 If youre going with friends and getting more than one room, which is what we did, request side by side rooms and you can get the hotel to open up a connecting door between them so you basically have one big room where you all can yell at each other to get ready, quick, all day!

You can get to the hotel via cab, its about ten minutes from City Square mall. A cab should cost you about 12-14ringgit. But if you take an uber, it works out cheaper. I cant remember by how much exactly, but it’s rather significant.

Things to do in JB in the day 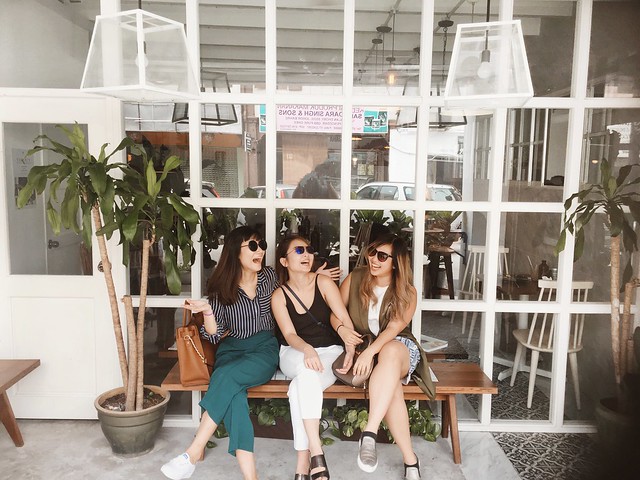 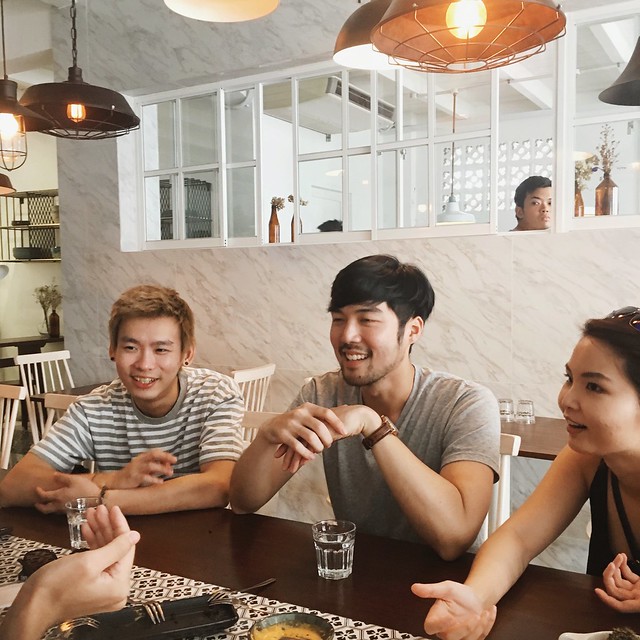 JB has a growing cafe scene, spawning a whole generation of youths who cross the border just to cafe hop. Crazy obsession or not, the fact remains that JB does have a ton of cafes, most of which seem to pander more to the instagrammable side of things than to your taste buds. Don’t get me wrong – they dont serve bad food. But the things I’ve eaten in JB cafes are undeniably average. 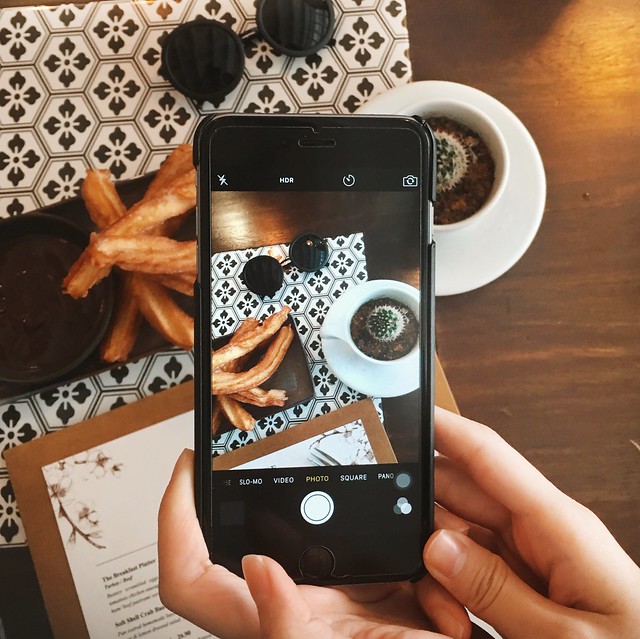 Salted egg yolk churros
This is from a cafe called The Replacement. What are they replacing? Don’t ask me. But with the artistically strewn kinfolk back issues around the cafe, little cacti growing out of teacups, and the copious amount of natural light, it’s obvious what kind of vibe they’re going for. This is the kind of place you would come if you were the type of person to say: these salted egg yolk charcoal churros are lit af.

A little way down from this cafe sits a stall that proclaims BEST CHICKEN CHOP IN JB. I dont know if it’s the best, per se, but it definitely beat cafe food. All of us ordered the grilled chicken chop with mushroom sauce because we are boring. But boring or not, it was pretty damned good.

We went to this place called Thai Odyssey in City Square mall, which is apparently one of the best massage parlours in JB. It’s even got certifications turned into wallpaper and plastered everywhere so youre sure to know it’s the best. It certainly has a very nice, classy vibe. Full body massages start at 100ringgit per hour, which given our current exchange rate, is about thirty plus SGD. Would recommend. 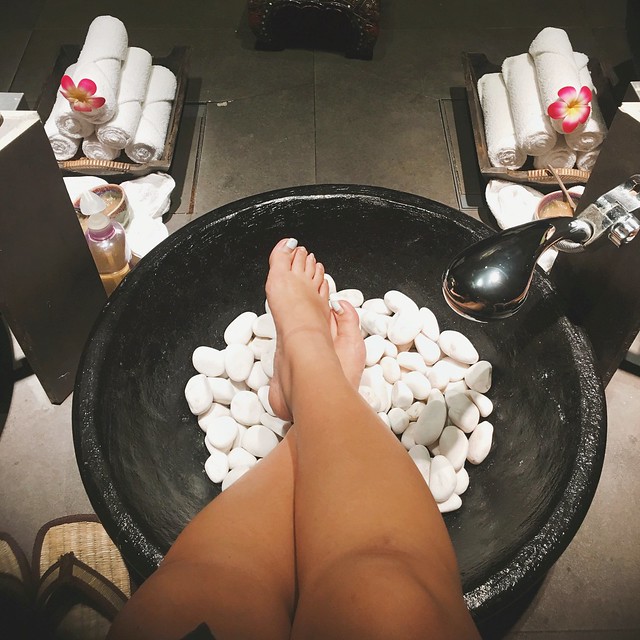 Things to do in JB in the night
Walk the street markets and randomly eat things.

There are pasar malam style markets that start about midday to late at night. They sell all sorts of things, like trinkets and basically food. You should reconcile yourself to the fact that most of what you will be doing in JB consists of you putting food into your mouth. Don’t fight it. Just let it happen.

The markets sell all sorts of food, like fried food, bread, fruit, and basically any other local eats that Malaysia is known for. A thing to look out for is the laksa van. Malaysia’s laksa is of the sour, sardine-y variety, which is very different from the coconut milk one we have in Singapore. It’s different, but I like it. Definitely worth a try. 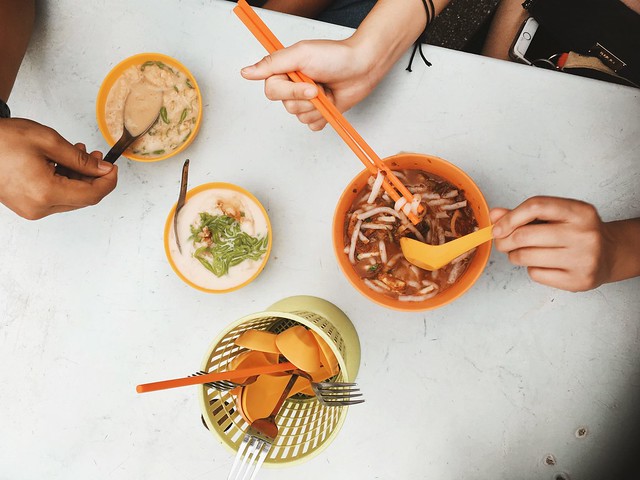 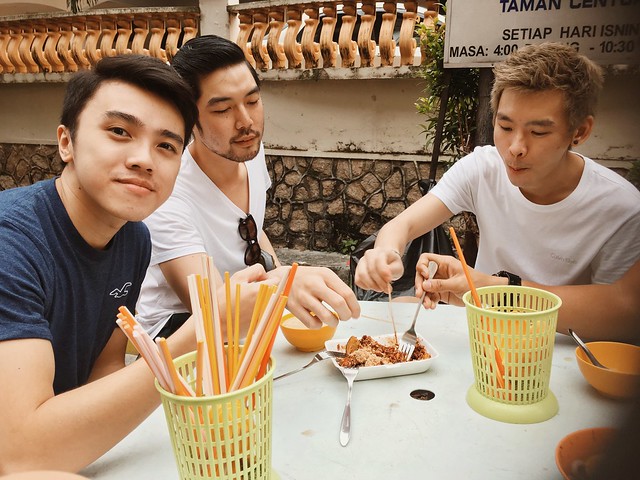 If you like it, there’s a famous asam laksa place in the basement of the mall opposite the Holiday Villa hotel as well. It’s known to be a laksa factory, or something like that.

Go to hipster town to basically eat some more 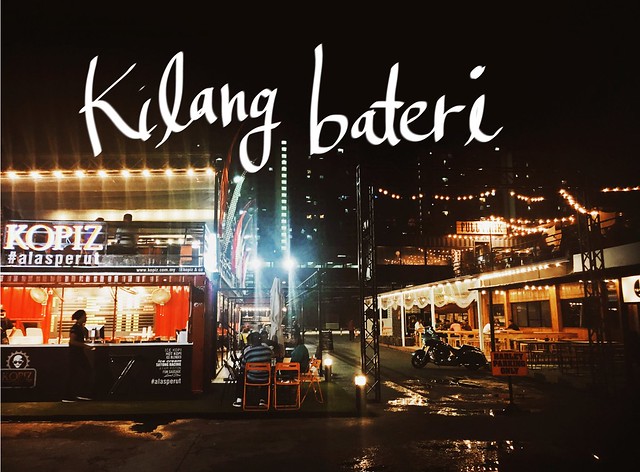 Remember what I said about making peace with eating in JB? This place called Kilang Bateri is basically a converted old container warehouse full of shops, restaurants, and bars. I didn’t shop much, but I did get my phone screen protected with a tempered glass screen protector for 10ringgit. I believe it’s 10SGD in Singapore. Steal!

The bars there are all quite cool, in the old fairy light, live music style. Very grungy, and it’s the kind of place you say has ‘character’, I suppose. The best thing I would recommend trying when there is this restaurant called i-Shell Out, which is basically a seafood restaurant that is ridiculously affordable for what it is. 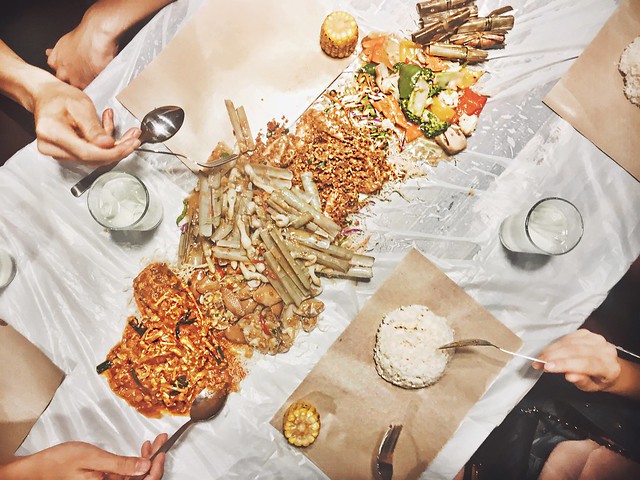 They basically cook and pour out everything on the table in front of you, and you eat off it. Don’t worry, it’s clean – they put a plastic sheet on top of the table before starting. Above, you see bamboo clams, lobsters, veggies, clams, prawns, and some kind of otah. It came up to approximately 6SGD per person, and we even had a jug of lime juice to go around. In Singapore this would easily cost five times the price. So yes, this is also very, very recommended.

Getting around in JB
I briefly mentioned this earlier, but you will find it a lot cheaper to take an Uber around over cabbing, which is already very affordable. If you have a big group like us, get an Uber XL, which can hold six people, as opposed to splitting into two cabs. This means that you might want to get a SIM card – the data cards are about 30Ringgit for 1GB, from what I saw, and only one person in the group needs to get it. That person can be in charge of calling all the ubers, etcetera.
Other Misc Things
There is a Left Luggage right when you exit the checkpoints at the border, before you enter CitySquare mall. It’s 20Ringgit for a huge locker, which all six of us shared. This is useful to know if you want somewhere to store your bags after checkout while going shopping.

Right opposite the Left Luggage there’s a great Rotiboy outlet. You’ll smell it a mile away. Rotiboy is a love it or hate it thing, and I’m on the LOVE IT side. It’s basically this bun that is crispy, warm, salty, and which smells and tastes amazing.

Shopping in JB is very popular, mainly because of the exchange rate. Because I didn’t really do much shopping (lazy, etcetera), I cant vouch for this personally. But from what I hear, uniqlo and nike/adidas shoes are cheaper there.

Costings
Lastly! The total amount of money I spent on this trip was 150SGD, inclusive of the hotel stay, which we paid in cash upon arrival. We changed money at the Yishun money changer before crossing the border, and the rate we got was about 2.88. If you change it in JB it’s 2.8. So not much difference there. For a two day trip inclusive of a great hotel, nonstop snacking and eating, and a massage, I’d say this is a pretty good price. 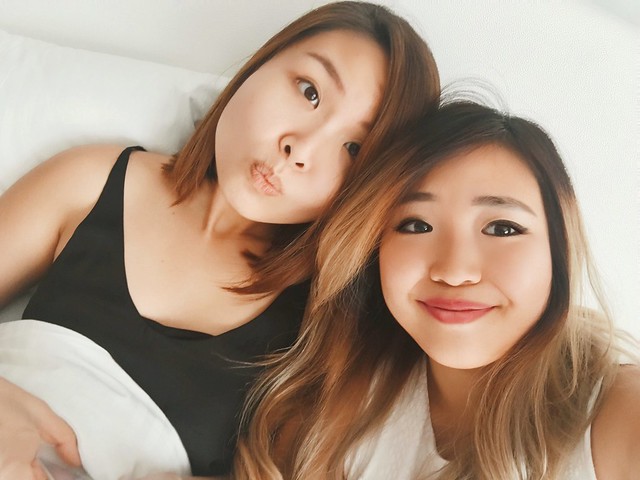 But with all trips, it’s the company that truly makes it great. So go with your friends, have a ton of fun, and come back with stories to tell. And there you have it: my anyhow guide to JB.