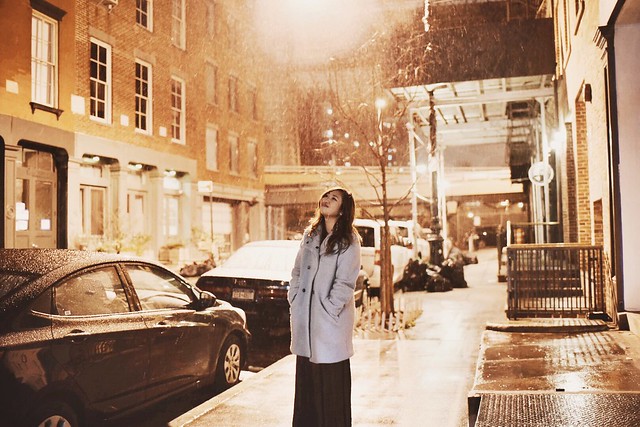 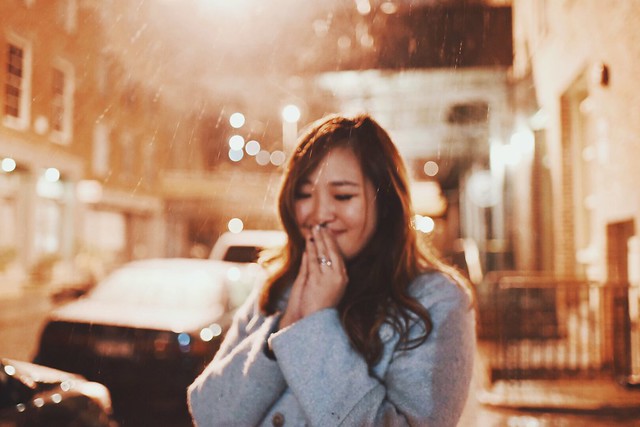 I’d been angling for snow ever since my arrival in New York. I blame this on a variety of reasons – an overly romanticised idea of white powdered fluff, the dreams of my eighteen year old self, and that damned white christmas song. As life would have it, the winter I lived in New York was the warmest winter they’d experienced in years. I walked around in tank tops and bare legs and ate gelato and cursed the sky. I asked everyone I saw if they thought I’d see snow this year – cab drivers, housemates, neighbours, our grocer – and held on to their answers as if their word were deed.

The snow did not come.

Edging towards the end of my two months I told myself that i did have all I’d ever needed, that snow was just crystallised water anyway, that it had faded in importance now that I had gotten so much more that I’d bargained for here, the overwhelming love and warmth and generosity of the people here who’d wholeheartedly accepted me into their lives warming me way past freezing point. I told myself this while looking skyward hopefully. I told myself, let go.

My last night in New York while up to my ears in clutter and cursing my shopping impulses, a friend looked up at me across the kitchen table and said: it’s snowing. I ran to the window and stuck my head out and stared upwards only to be hit in the face by cold water. I returned indoors. It’s raining, I corrected him, and he shrugged. Potato, Potahto.

Georgina and I got dressed and left for our last dinner at the Mandarin Oriental, a restaurant with floor to ceiling windows offering an incredible view of the city. As I leaned my head against the glass and stared down at the rain my phone buzzed. It.. snowed for three minutes today and I couldnt help but think of you. Another friend I’d been harassing with my over analysis of the sky and why it wouldnt snow and hold on, did he think it would snow before I left? I closed my hand over the phone and stared out of the window. The rain continued beating down.

As I tried to leave New York my body reacted violently and angrily. In the middle of our second course my right eye turned red and started swelling. What did you eat? G asked me, and I shrugged. I didn’t have anything I havent had before – I was having an allergic reaction to leaving. I knew this but I wouldnt say it because I would be laughed at, but I knew it to be true. My nose started itching and I felt a throbbing ache in my chest, and I thought to myself, let go. I felt drained.

We stood in a pharmacy at two am trying to figure out the best anti-histamine to take for my allergies. If this were a plane ticket my allergies would clear right up, I thought. Then I told myself not to be dramatic and popped a pill. As I was trying to pay for my medication the doors to the pharmacy blew open and I thought I saw something white fly past. I ran out and found myself standing alone in a dead empty street, a rarity for new york city, buffered by nothing but wind and rain. I said to myself: let go.

We held hands for the entirety of the cab ride home, my face pressed to the glass, trying to absorb and hold on to every last sight of the city I loved. Did you see real snow? I texted back urgently, or just water? Was it white? I needed to know. The reply came: I saw the smallest thing that could be considered by some to be a snowflake, yes. I closed my eyes. It would have to do.

We pulled up for the last time in front of our apartment building, and as I tipped the driver and opened the door I saw something white float past my nose. I struggled with my dress and nearly fell out of the cab in my desperation to get out. Are you okay? The driver yelled. I clapped my hands in front of me, trying to catch the white piece of fluff. I opened my palms. They were wet. It was snowing, I mumbled, then I turned. I think I saw a snowflake!

Ignore her, G said, she’s been like this all winter. Thank you. Have a nice night.

I think the driver laughed and drove off but I cannot be sure. I stood in the street and stared heavenward.

Small white bits flurrying around in the sky buffeted around by the icy winds. It’s snowing, I whispered, and then I shouted it: IT’S SNOWING! The windows to the apartments above me opened and my neighbours slowly poked their heads out. It sure is, kid, one yelled. You got what you wanted! another said. The door to our building opened and my housemate stumbled out, cigarette in hand, obviously hungover. He pointed the smoking cigarette at me and smiled. New York snowed for you, kid. You are so damned lucky. He never smiles. His girlfriend poked her head out from under his arm and walked towards me. She put both hands on either side of my face. And on your last night too. I’m so happy for you, she said, and a snowflake caught on one of her lashes.

I walked to the centre of the street and stood there, face turned upwards. I could hear the murmurings of conversation from the people I had come to love over the past two months behind me, and I thought I heard G say: let her be.

I stood in the center of the street and stared. My face hurt from smiling and the cold. I didn’t move for half an hour, not when they started yelling for me to come in, not when I felt my toes curl up and freeze over, not when I realised for the first time the actual danger of my ear tips slowly dying and falling off from the cold. As the snow slowly turned to rain I finally lowered my head and turned. They were still standing there, staring at me. I raised a hand to my face and it came away wet with tears and melted snow.

They smiled. Bye, kid.
I wiped at my face. I’m so happy, I said. I got everything I ever wanted.
It’s time to leave, he said, and I nodded.
I know.

I closed my eyes and whispered to myself: let go. When I opened them they were still there and I was smiling so hard it hurt and I thought to myself: no. 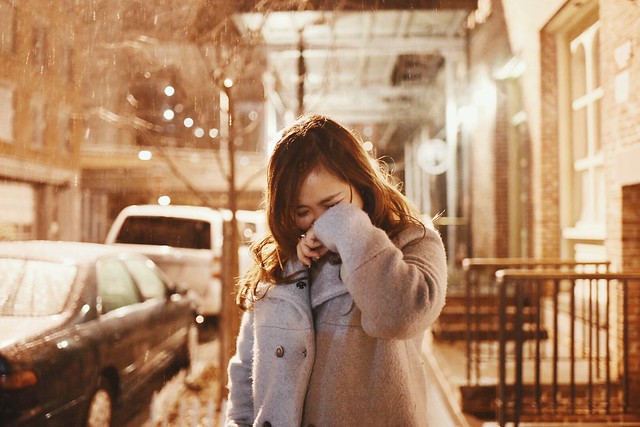 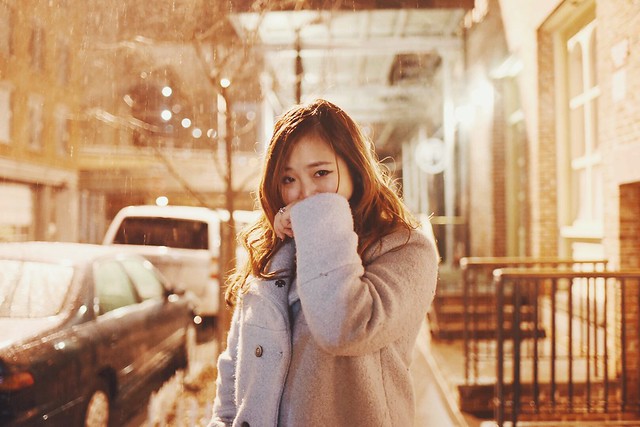