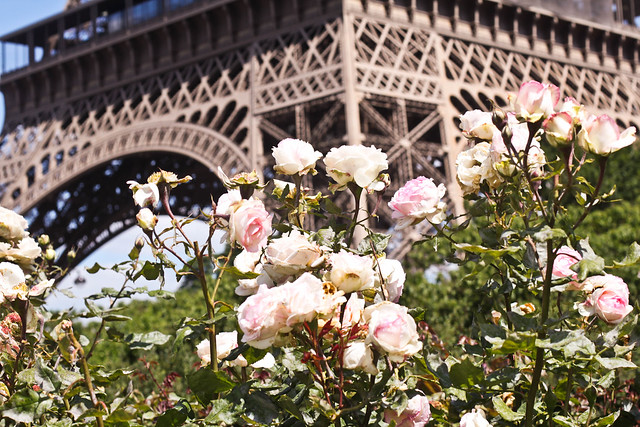 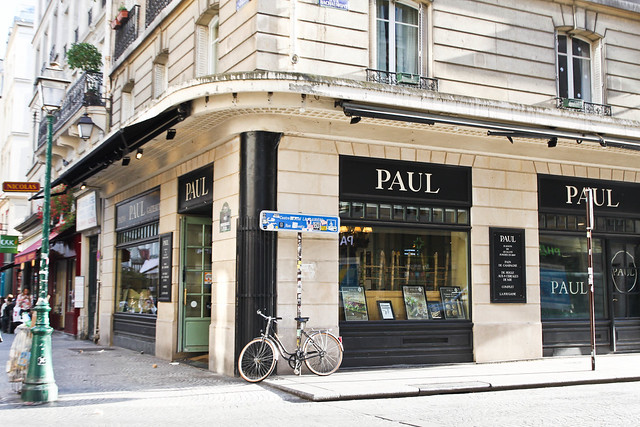 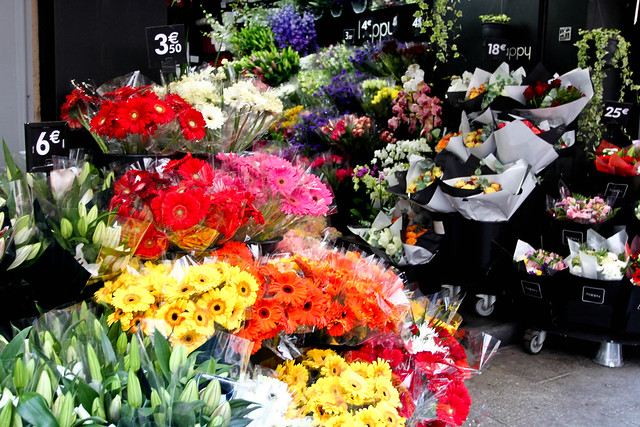 Paris, France
I had such a dreamy time in Paris this time round. Having covered most bases in Paris this February, we thought three days was more than enough for the city of lights and love.. and we thought wrong. I’ve never wanted to not leave a city as much as I did Paris, and I have a feeling it’s got something to do with the fact that I pretty much found my dream apartment here.

When I made plans for Paris, Nadia from Paris Flat List very generously opened (one of) her doors to me. I’ve done all the touristy stuff before, I said, so this time I want to live like a Parisian – and when I walked into the apartment she selected for me I felt like all my christmasses had come at once. Paris is an expensive city, so living like a Parisian very often means you stay in a studio apartment that’s space efficient but still very chic because everything about Paris is chic. It’s their governing principle and city’s motto, or something like that. 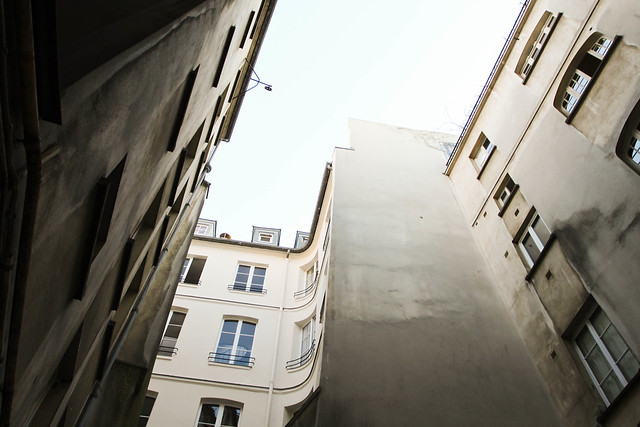 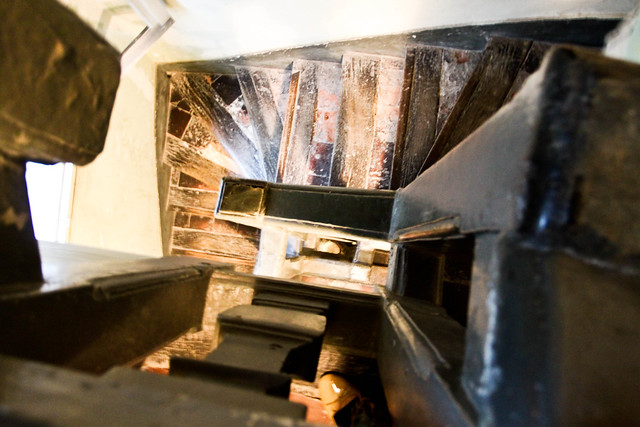 I met Nadia in the building’s courtyard and we walked up to the apartment together, exchanging pleasantries. The courtyard was hidden behind a huge ornate door flushed straight into a street of boutique shops (and right opposite a Pierre Herme too, what a dream), an architectural style quite common in Paris. We were in the Le Marais district, in between the 3rd and 4th arrondissement, and as we climbed the stairs Nadia gushed – It’s one of the most beautiful Parisian neighborhoods in Paris Central, locals love it, you can’t get more Paris than this. I stayed in Rue De Clichy the last time I came, I told her, and she turned to me with a twinkle in her eye:

And opened the door. 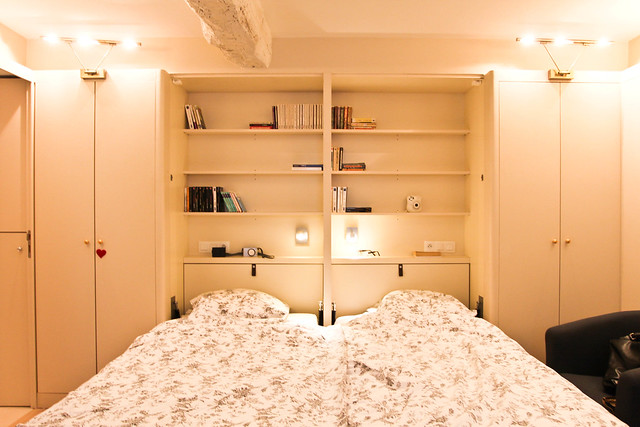 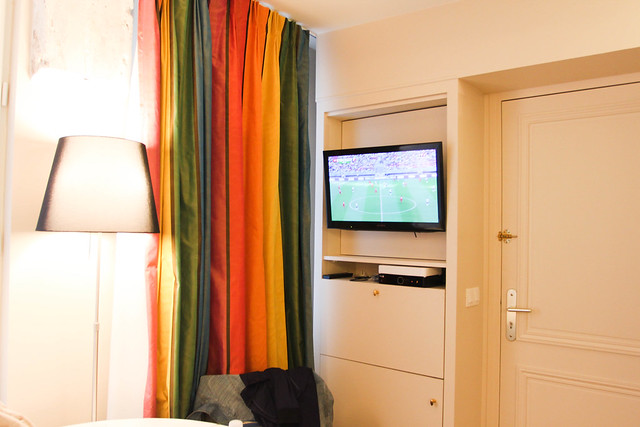 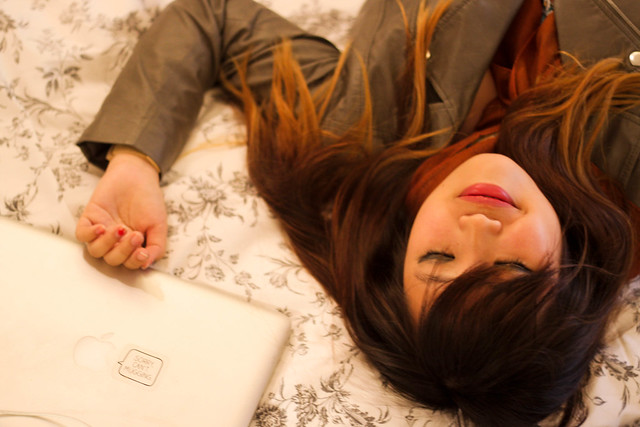 Oh my word. No, Clichy is not as pretty. No Sir.

It was one of those Japanese style luxury apartments, where everything is calculated to realize the best possible combination of efficiency and style. The interior decoration was immaculate. Everything doubled up as something else. I’ve always associated the idea of luxury apartments with sprawling, huge spaces, but this studio apartment knocked that right out of the court. Look at those exposed beams! Those rainbow curtains! I nearly expired on the spot.

I’ll leave you to enjoy the apartment and district, Nadia said as she set the keys down on the table and left, have fun!

In hindsight, I might have had a little too much fun opening and closing all the different closets and getting lost in the insanely comfortable quilts: I almost didn’t want to leave the apartment to explore Paris. But honestly, who can blame me? Check this out: 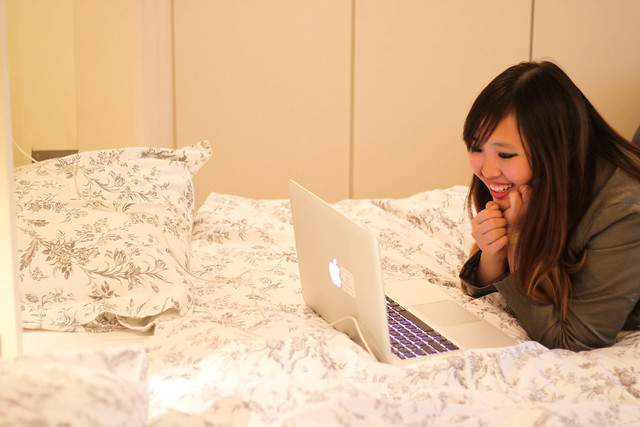 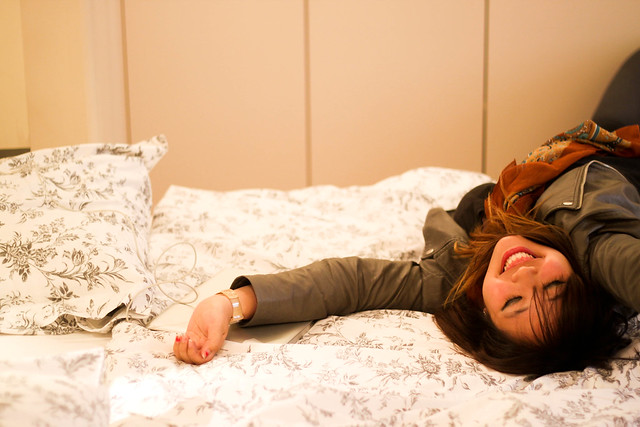 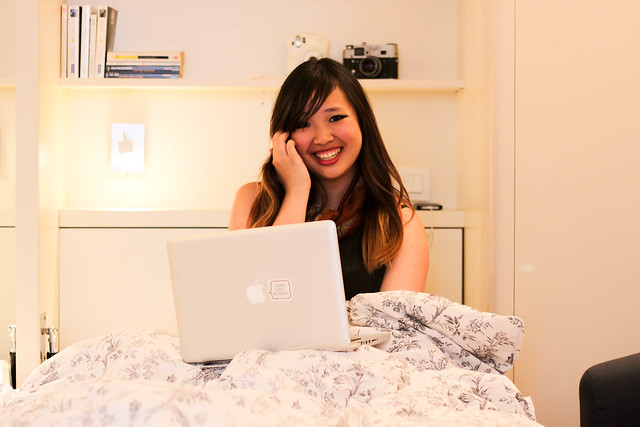 Crazy comfortable bed, and very wish-fulfillment too: I’ve always wanted to sleep under a bookshelf.. and I know this is a little out of context, but can I just gush about the electrical plugs near sleeping area? The soft lighting from the bed top lamp let me flop on the bed and use my laptop for hours without getting tired, and when I saw that they had an electric powerpoint above each bed I nearly wept. This is coming from a girl who’s spent way too much time crouched in some weird corner trying to charge my phone and use it too, or sitting under a table to charge my dying Macbook late at night when all I want to do is lie down and spoil my eyesight read Buzzfeed online. 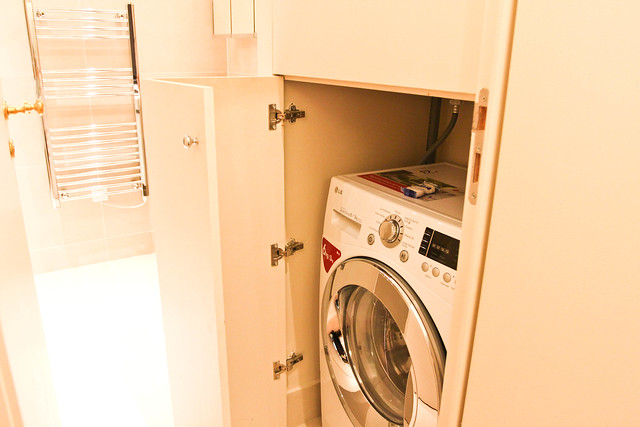 I thought this cupboard was just a cupboard – but no, it’s hiding a washing machine! Perfect for travelers for whom Paris is one stop in a long list of destinations – because coming back from three weeks of travel let me tell you that renting at least one apartment with a washing machine is super important.

And I make it a point never to rent a place without a kitchen, hostel or apartment, because of how expensive eating out can be. How can you squeeze cooking facilities in a studio apartment without making the room look too cluttered though, you ask? 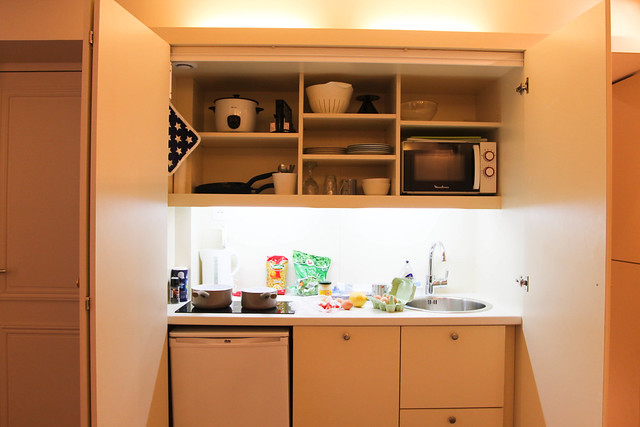 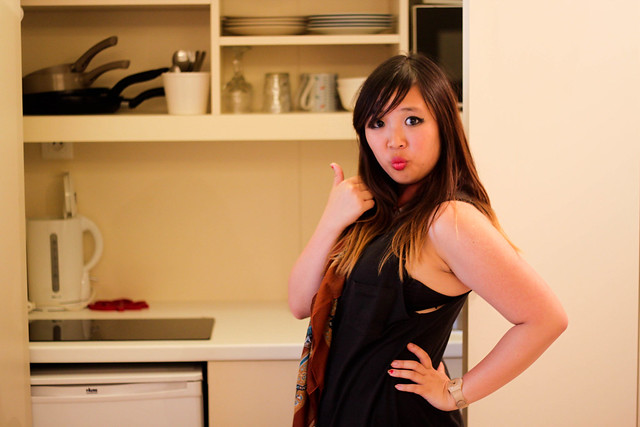 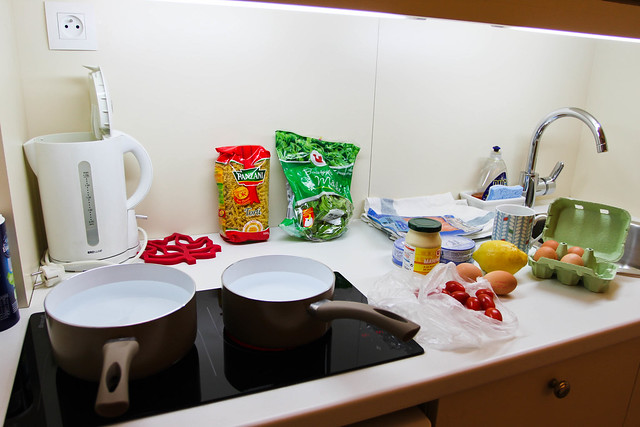 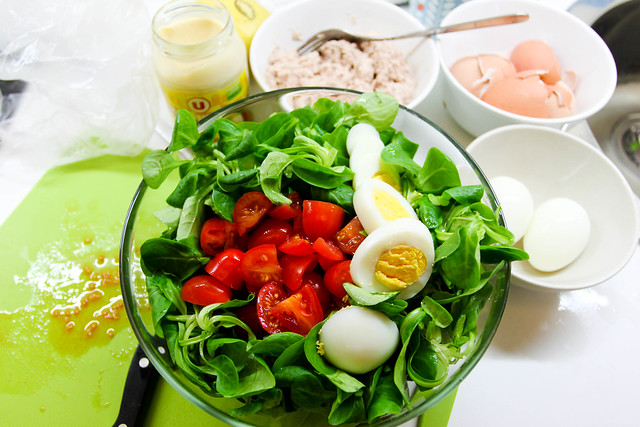 Ta-da! Full kitchen facilities, hidden behind what looked like innocuous cupboard doors. I made dinner for three with leftovers to boot for under 12 Euros. The one meal I had in a Parisian cafe cost me about 20 Euros for one person. I’m just saying. 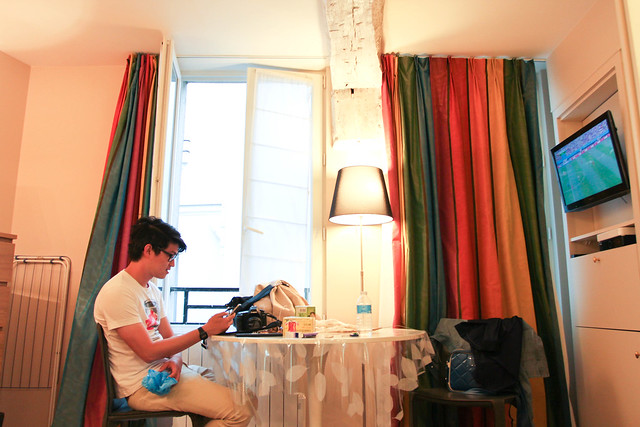 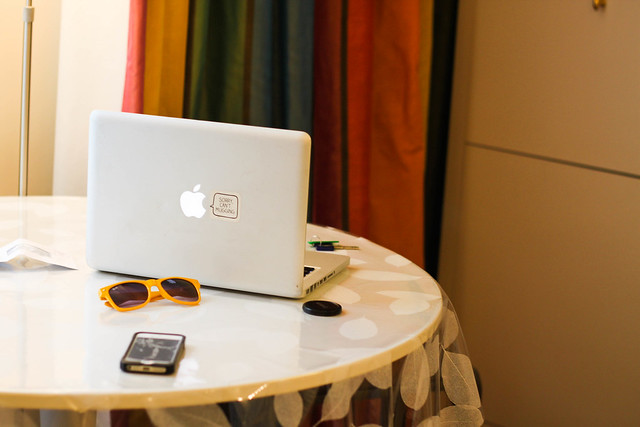 Well obviously during World Cup season you need an apartment with a retractable flat screen TV to watch the France vs Switzerland match… (the aftermath was insane, too)

And ugh, I’m breaking my own rule of never posting toilet selfies, but then again I have never stayed in an apartment with a toilet nicer than that of most hotels. 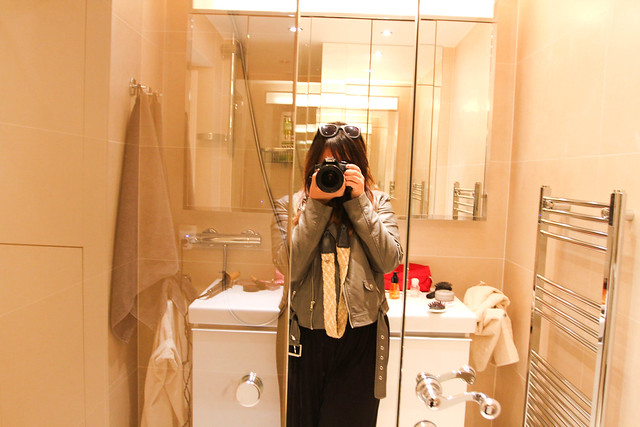 Mirrors everywhere to create the illusion of spaciousness. The mirror on the right opens to a toilet cubicle and the one on the left hides a power shower area. 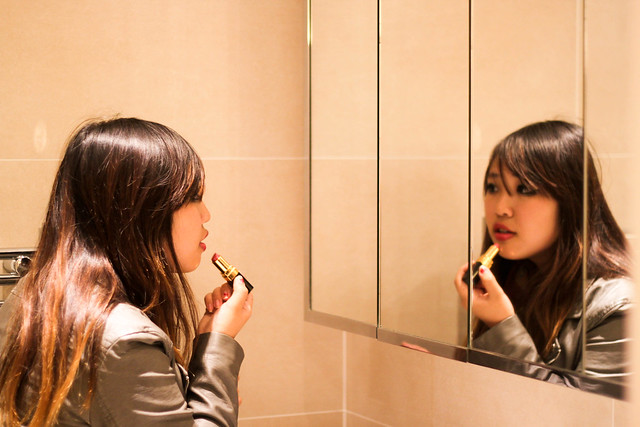 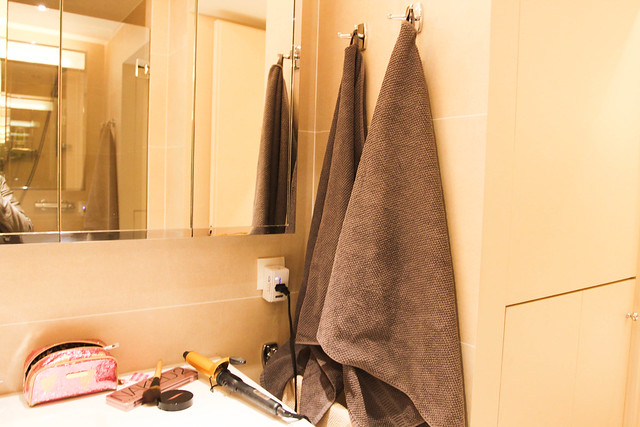 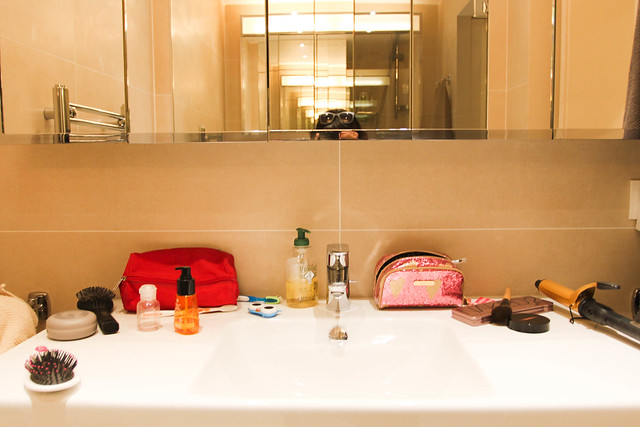 Très Magnifique! Any place with a mirror side powerpoint for me to plug in my hairdryer/ curler/ straightener has a stamp of approval from me. 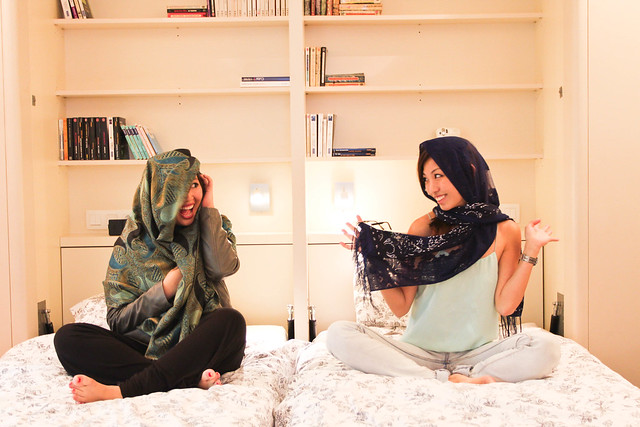 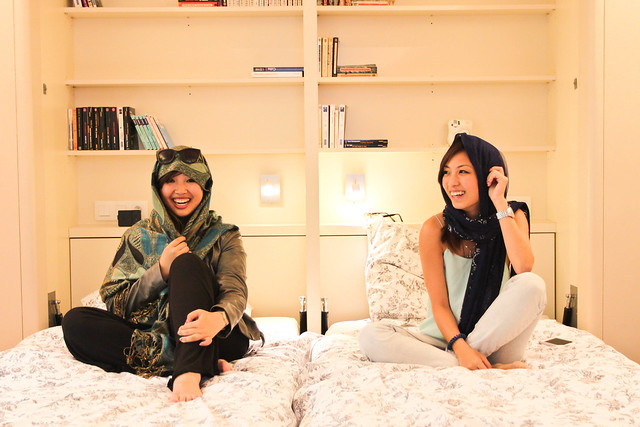 You wouldn’t think it gets better, but it does. When I finally did leave the apartment, I felt like I couldn’t have asked for a better district. It was quirky, it had character, and yet somehow it was still classy.. While it was walking distance from the classic attractions – the Louvre, Notre Dame, the love-locked bridge, River Seine – it was nestled right in the heart of a very Parisian neighborhood, with close to no tourists and very, very trendy people. If I’m not wrong, it’s traditionally a gay district, and I don’t mean to stereotype, but boy did everyone dress well there. I spent my first evening sitting at a cafe and people-watching, and littered up and down the street were bars, cafes, ice cream shops and boutiques. It made walking home late at night after strolling down the Seine feel so safe, which differed so greatly from the last time I was in Paris, having to quicken my pace each evening as I hurried off deserted streets. We had tea with a true-blue parisian, Felix, and he confirmed my suspicions – this area was what you’d call a hipster area, where trendy people converge, but because this was Paris, it wasn’t just hipster, it was a whole new level of chic hipster. Only in Paris, huh.

I never wanted to leave the place. Unfortunately, I had to, because we’d already booked our next leg of the trip (Disneyland!!!) and also because it was so popular that there was another guest coming in the day we left. Fortunately, I can always come back – and I know where I’ll be staying, if I ever do return to Paris.

For those of you who also, want to live like a Parisian, Paris Flat List rents out apartments in Paris City Center that have been carefully curated to give you the most amazing Parisian experience – you can find them here on their website, or on Nadia’s Airbnb page if you wish. I recommend her 100%, but hey, you don’t have to listen to me (Although you should). After all, I’m just one voice in nearly three hundred airbnb user reviews.

Thank you so much, Nadia & Paris Flat List for the apartment! It was amazing. Bon Jour, Paris, I’ll be back.