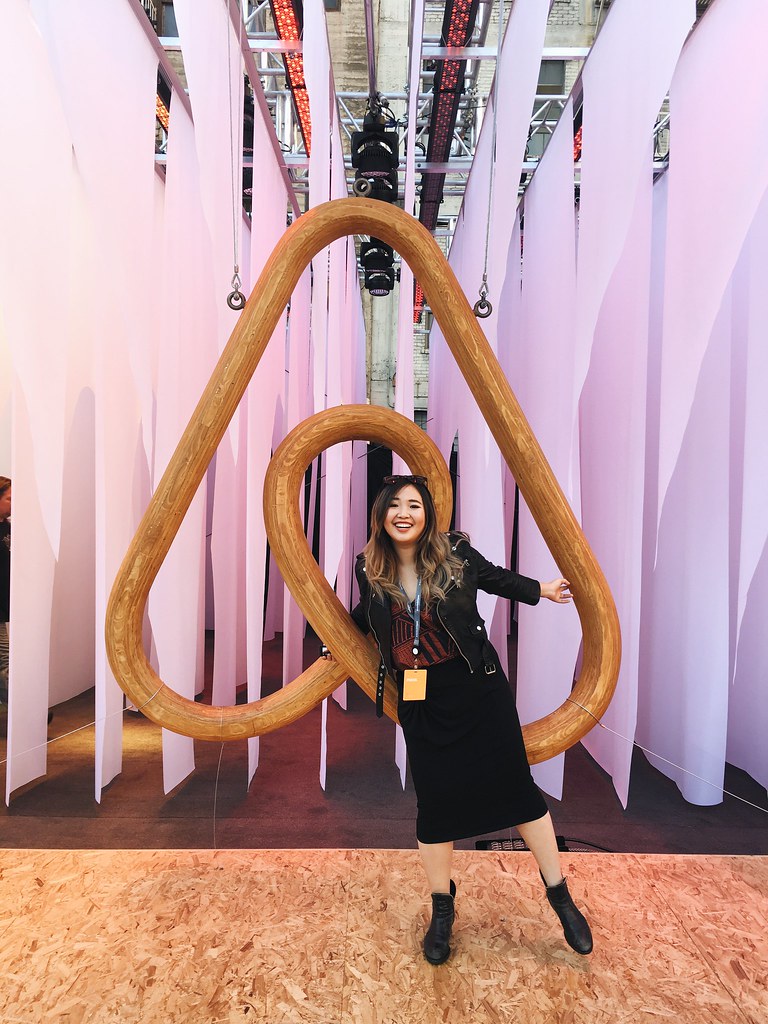 I don’t need to mention that one of my childhood dreams was to be a journalist for you guys to have figured that out on your own. I had my eye on Columbia for the longest time because of their journalism degree, but such dreams are not made to be self-funded, and so, sans-scholarship, I stayed in Singapore for under/postgraduate. Though this by no means is a complaint – having met some of the best people in my university here, having stumbled into media and presenting, having been offered so many opportunities by the grace of God and the kindness of people around me… my life would have been so incredibly different if I’d spent the last six years of my life elsewhere. And all that was my roundabout way of saying, kind of, that I got to live out one of my journo dreams last year end at Airbnb Open 2016.

I’ve been labelled press many times, but this was the first actual full blown press conference I’d attended, and it was an insanely eye opening experience. From the early morning breakfasts at the press center where journalists from all over the world were aggressively typing out stories and bouncing ideas off across the room, to rockstar press talks where the crowd went wild as the founders of Airbnb walked onstage (seriously, those dudes are like the Zuckerburgs of the news world or something), to hanging out in the interview room where a million interview were happening simultaneously.. it was surreal. It was like living in a television set while also watching it unfold. I looked around, I thought, this is what an alternate universe for me would look like. I thought, I’d better do some interviews. And I did. 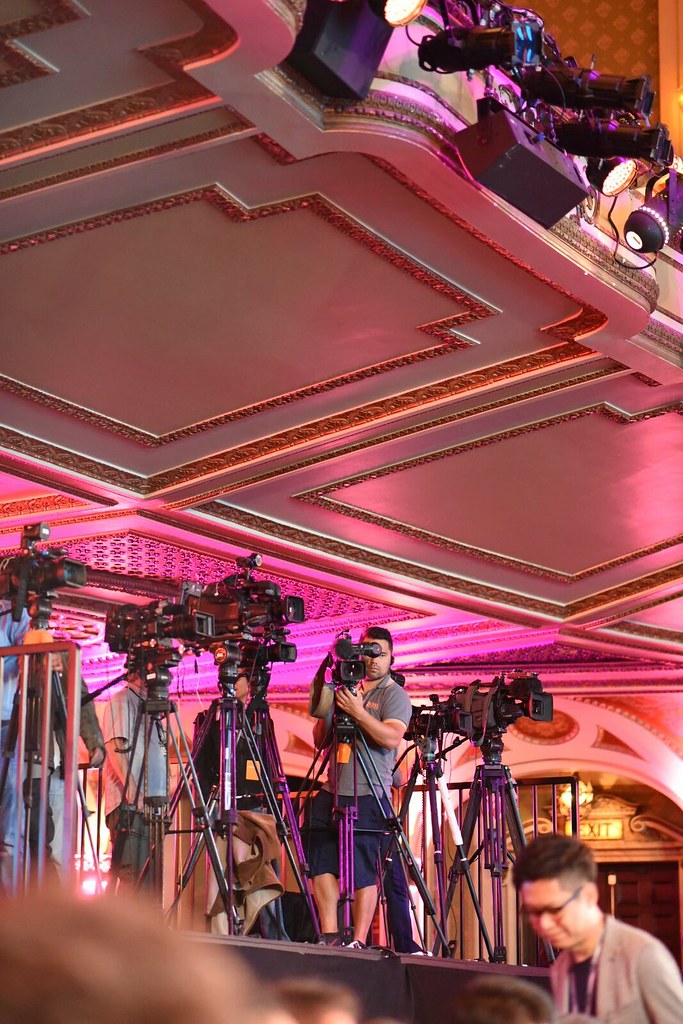 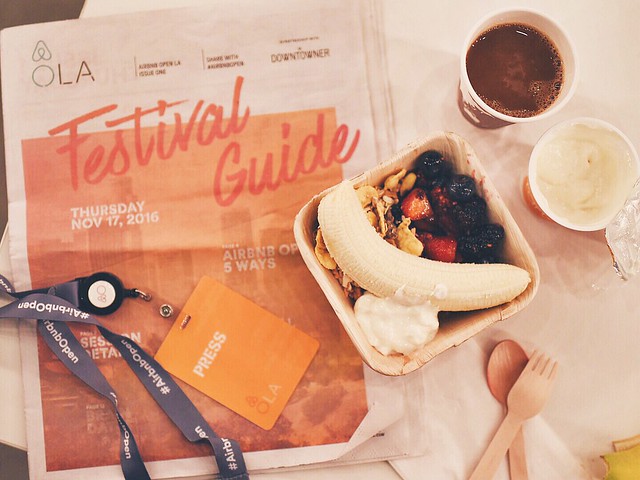 Breakfast at the press center! + my weak attempt to be healthy.. which didn’t last long. HAHA 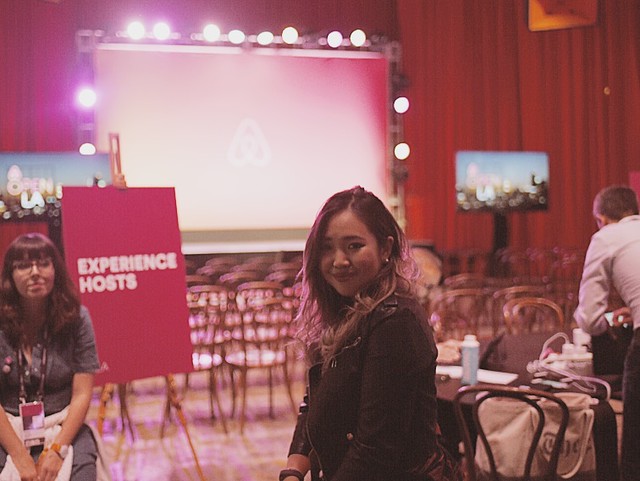 A grainy picture of me at the press centre, in between keynotes and panels by the Airbnb team

Despite sitting on the traveller, not host side of things, I found myself attending a bunch of talks specifically catered for hosts around the world. That was another thing I liked about Airbnb Open – that it wasn’t just a press-centric conference – it was an entire festival where Airbnb Superhosts from around the world flew in to meet each other and exchange tips on hospitality and hosting, as well as get the chance to meet and talk to the Airbnb folk themselves, to see what was upcoming and to get their questions answered. Because I am a busybody, I sat in for several of the discussion panels for hosts (quietly of course, trying to be invisible at the back end of the room) to listen in, and boy am I glad that I did.

Different talks cater to different audiences, and when you listen in for something that is not catered to you, you learn so much about the other side of things that can also be unexpectedly very useful to your own experiences moving forward. This is something that holds true for everything, and I am and have always been a big supporter of stepping out of your comfort zone and expanding your interests beyond what you’re good at/familiar with. This is why I encourage my students in school to read books about things in genres they’re not used to, to participate in debates they don’t agree with, and to generally try and stay open to learning about the other side of things. This as a practice imparts empathy, perspective, and is generally interesting. And of course, this is just me being long winded (again) – what I meant to say was, sitting in for the host talks paradoxically gave me as a traveller a lot more assurance about my experience using Airbnb, and taught me what additional things to look out for when starting to embark on trip-planning!

You guys already know about how to select an Airbnb listing from my previous posts on the subject. If you haven’t read my Guide to Picking the Perfect Airbnb Listing, I strongly suggest jumping on it because it isn’t just a guide I wrote for the blog, it’s one that I put into practice every single time I travel – and it’s one that is formed from experience!

However, here are a couple of the more interesting things that I didn’t have to learn through experience, but learnt through the panels and talks:

1. All hosts are legally required to disclose surveillance devices in their listings, and strongly discouraged from having them, including but not limited to CCTVs, baby cameras, and recording devices. If they disclose this after a traveller has booked, then the traveller can cancel with a full refund without penalty. This is something that I’ve always wondered about, vaguely, so I’m glad i have a firm answer on this.

3. The number of options under Amenities are always being updated, so it becomes easier for a host to define and distinguish their listing, and conversely, for a traveller to filter down listings according to what they want out from a place! For example: I think most recently Airbnb has added a whole bunch of options under the Family amenity section, and so you can possibly filter for a listing based on whether they have a changing table, a babysitter recommendation, so on and so forth.

4. There is now co-hosting on the Airbnb platform. 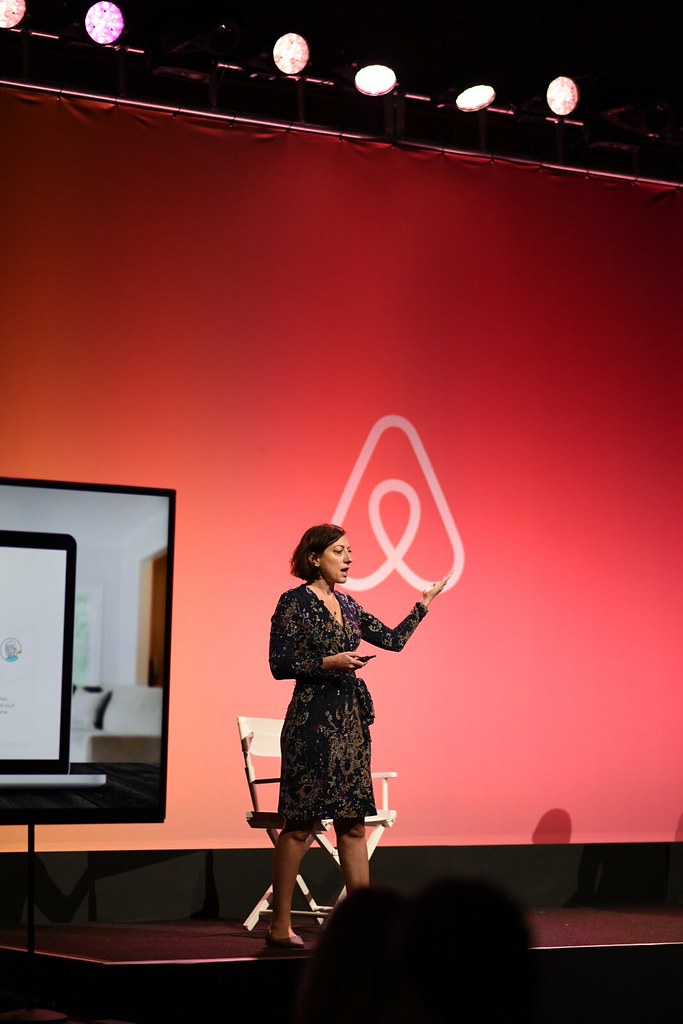 Sitting in on the Airbnb Co-hosting talk

The co-hosting part was the most interesting thing to me. In fact, the co-hosting announcement was part of one of the keynote for Hosts that I sat in on, regarding their new and improved Airbnb app for Hosts. Another announcement they made during that talk was the impending launch of photo sending capabilities in the Airbnb messaging app, which is honestly going to be the best development we see in both user and host experiences with the app, I think. It’s not so bad for city listings, but when you head over to the countryside, like I did last July in the Isle of Skye, it can be pretty tough to find your listing if you’re driving for miles and miles on an unending highway – so the ability for a host to send you a photo of a landmark or some kind of visual indicator of where to turn in, etcetera etcetera, can be incredibly useful.

But I digress, again.

Co-hosting, which they announced as slowly being rolled out worldwide, is the ability to add a trusted family member or friend as a cohost from their own account so that they can help you manage the listing when you’re away, without giving that someone access to your personal account, personal details, or payment information.

This may be a point of convenience to hosts, but it is so much more a point of safety to travellers. Just the fact that you have to add another account’s profile as a co-host already ensures the second host is more or less legit and verifiable. But beyond that, the new feature means that you’ll never risk being met by someone who isn’t your host and isn’t officially verified by your host, and also offers hosts an option beyond just leaving their keys under the shoe rack somewhere if they’re not available. It means that I don’t have to worry about what happens if I arrive at a strange timing – cos my host can just add a neighbour as a co-host who can let me into the house, and it being endorsed by the Airbnb platform also acts as a safeguard for me so that I know beforehand who’s coming to meet me, I can see their profile picture and face, and I can communicate with them beforehand. It also allows the host to pay the co-host a percentage of the rental fee – which was a small point that I really liked, because it meant that bored old aunties have a way of making extra income by helping their neighbours check in guests, and it not only promotes a sense of community within the actual local neighbourhood, it also injects more money back into the local economy directly.

One of the hosts I spoke to – not about this, just in general – mentioned to me how putting up a room in her place on Airbnb gave her the extra income and final decision-making push to scale back her full time job into a part time one, just so she could also work on her art. And I thought to myself: there is an academic paper in there somewhere, a social study, that needs to detail the way Airbnb has played into the gig economy, and enabled individuals to pursue the less financially feasible passions in their life. And here you go – cohosting might just be one of them. 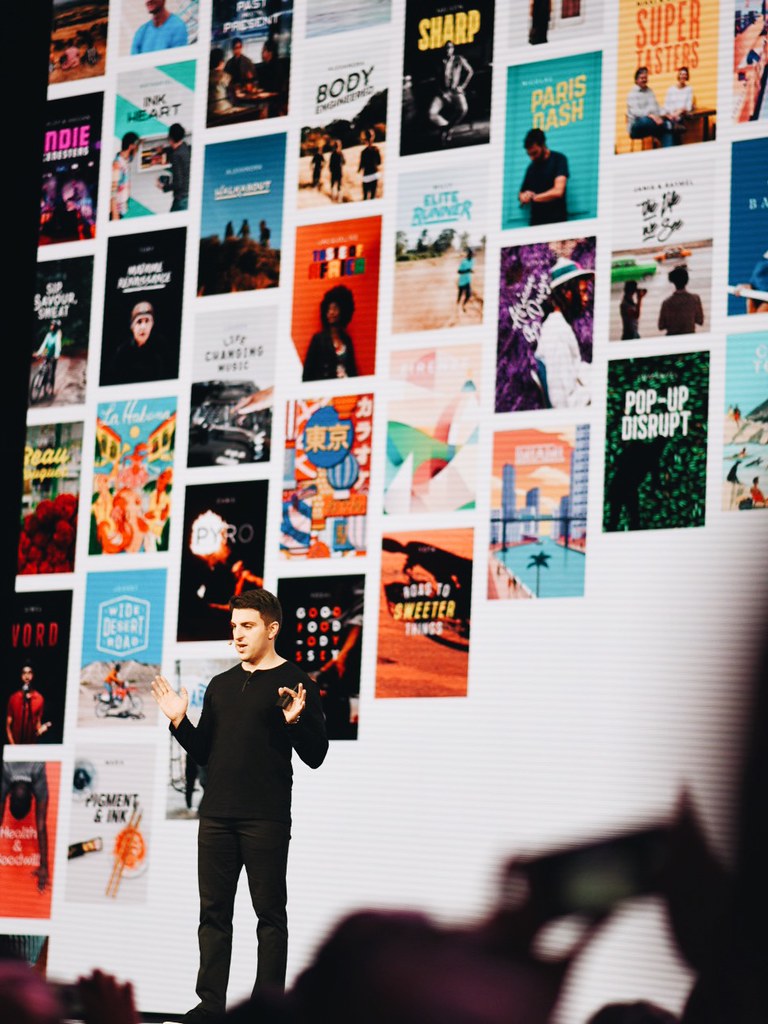 Listening to Brian Chesky, the face of Airbnb and one of three founders, give a keynote

Lastly.. sitting in with the hosting community gave me a lot of insight into what the host goes through.

Perhaps this isn’t the most useful or pragmatic thing to takeaway from a conference, but it certainly was the most emotionally resonant. I already wrote a piece last year on the way certain hosts use their listings as vehicles for social commentary, and given my own experience with multiple hosts world wide, I also love how they take it upon themselves to share their culture and life through friendship and food with guests in their own home. But on a more local, person-to-person level, I loved getting to see the human side of the hosting community as a whole. I listened in on a group of hosts enthusiastically discussing the best way to make their guests feel like the first guest in the place – exchanging little touches to make them feel welcome. I listened to them talk about cleaning techniques, how to make your home smell nice and welcoming, how to get rid of lime buildup in crevasses and corners of your listing, what the best cleaning equipments are.. Basically, I listened to them try, passionately, to turn their homes into a home for me. It was incredible. It felt so .. is cute the word? But the word feels too trivial. Human, perhaps. It was endearingly, amazingly human and sincere. And that reminded me that this was what Airbnb was and has always been founded on – people, wanting to meet other people, and wanting to make homes all over the world. I think sometimes I forget, especially when booking whole listings and not just private rooms within Airbnb listings, that I’m not leasing a place from a faceless professional entity, but from people who have found it in themselves to open up their homes and invite me into their lives. It could have been you. It could have been me. Welcome home, the Airbnb website says.

The corporation is the corporation, and it does a wonderful job. But the people make the warm and lovely building blocks of the community, and they are the stuff that fuels and fires up Airbnb as an entity.

Thanks for having me at the Airbnb Open, guys. More #LADiary entries to come. x