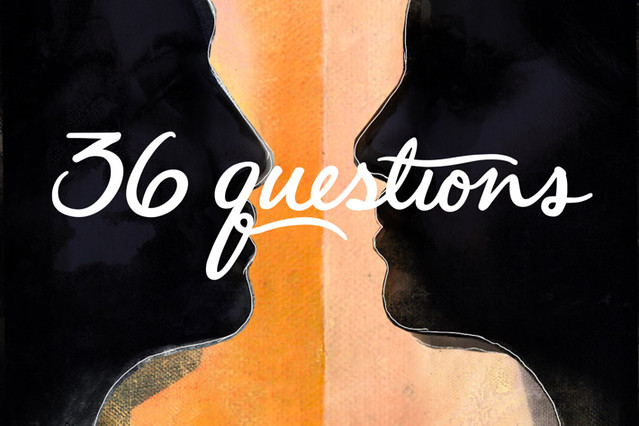 So I’m perpetually obsessed with finding new and more efficient ways to manage my time, and a big part of that is carving out time to consume content that i enjoy or that I feel enriches me creatively (see: Five ways to read more daily). And the most recent way this has manifested in my life? Podcasts.

Most podcasts are informational (I like the Freakonomics one) or funny (Weird Work), and I enjoy listening to them so much even if the subject matters have absolutely nothing to do with my life. It’s become so natural for me to tune in to a new podcast episode while getting ready in the morning or to plug in while on public transport. But very few of them have a narrative thread, and that’s something I greatly miss from radio stations in the UK – whole stations dedicated to people just reading stories to you in a comforting, grandfatherly voice.

So naturally, 36 Questions had me at three part musical podcast. It popped up in my recommended podcasts list, and I was like, are you SURE THIS IS FREE. Because how can such amazing content be free?! But the internet never ceases to amaze me.

We’ve become so conditioned to assume that content associated with high culture (art, music, etcetera) comes at a high cost – havent we all complained about Hamilton tickets being prohibitively expensive? – that i think when something similar is offered for free, it just blows our collective minds. When I was backpacking across europe I loved scouring forums for ways to get cheap tickets for musicals and plays, and it was also then that i really started being able to watch and enjoy theatre. That opportunity to really get into theatre would never have been afforded to me in Singapore because shows that travel here are mad expensive, and it’s just not within the price bracket for most people’s (semi?)regular weekend fare. I dont think there’s one easy solution for this because of the differences in cultural priorities for Singapore vs the States/Europe, but I do think that it’s a pity because it is a whole universe of joy and color and texture and magic and it comes at a cost that many people cannot afford.

That is a big part of the reason why here, especially, in the tiny island of Singapore, I appreciate what 36 questions aims to do.

The three part podcast is kind of like listening to a radio drama that occasionally breaks into song – it stars Jonathan Groff (Frozen, Glee, and Hamilton) and Jessie Shelton (theatre trained, but generally a media newcomer), and was written and directed by indie studio Two-Up. The story thread is relatively straightforward, with an interesting premise – a couple falls in love while doing the 36 questions (a psychologist-developed questionnaire that was popularised by the New York Times) and two years later, tries to fix their broken marriage by doing the 36 questions together again. There’s drama in the middle, a lot of rain, a lot of cheesiness, and also, a duck (throwback to season 4 of FRIENDS, anyone?). They often break into solos or have their dialogue phase into vocal harmony, which fires up a little frisson of delight in me whenever it happens.

There are two filmmakers who sit on the production team of 36 questions, and this works very much to the benefit of the podcast because it requires an intimate understanding of cinematic space, and subsequently how that has to be converted to an audio form without losing the lustre that comes with visual spectacle. As a result, listening to the podcast creates the sense that you’re sitting in on an intimate conversation between two people, privy to the tears, the heartbreak, the sighs, the drama, all up close. It’s a whole world carried around and transmitted to you through your headphones. And it’s extremely charming, which makes up for the dips in narrative, which does happen here and there. At some points the plot / acting becomes so cheesy I want to reach through the headphones and smack one or both of the characters, but this feeling is few and far between, and easily forgivable and glossed over by the charisma of the actors.

Overall a solid recommendation. I initially started on the series thinking it would be a great entry point to the world of musicals, but very quickly realised that it holds its own well as an entirely new musical form. You can download/stream/listen to 36 Questions here.