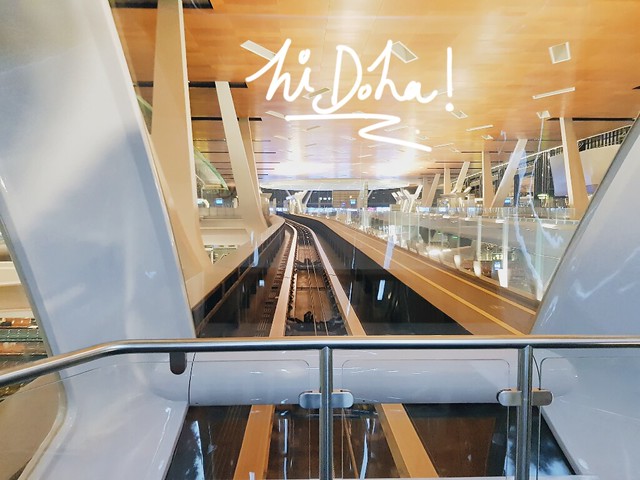 All photos in this post taken with the Samsung Note8
Hey guys!

In line with my new resolution of documenting my travel experiences for both myself and others who are researching their potential travel destinations, here I am with my documented experience of my expedition around the Doha Airport’s Al Mourjan business lounge. Haha.

This is useful for:
People deciding whether to redeem their miles for a lounge pass or not
People deciding if it’s worth it to pay for lounge access over a long transit in Doha
Curious people

I was transiting in Doha in the middle leg of my Singapore to Helsinki flight with Qatar airways, and my business class ticket gave me access to their lounge. I’ve transited in Doha many times, because Qatar transits through Doha to Europe often at very good prices, and I quite like flying Middle Eastern airlines.

This is my first time flying Business through Doha, normally I’m on economy, so I’ve never had lounge access before. A note before we move on – Doha has a really huge airport, like, if it were in Singapore it would literally be a GRC of its own. There’s a little sky train servicing the inside of the airport, which I’ve seen before while it was still being tested, and this is the first time I’ve managed to take it. It’s pretty cool, but the seats are single seats as opposed to a row. While this makes it look sleek and more minimalistic, it also means that less people actually get to sit. But I took it twice and it wasn’t ever crowded, so this was never an issue. 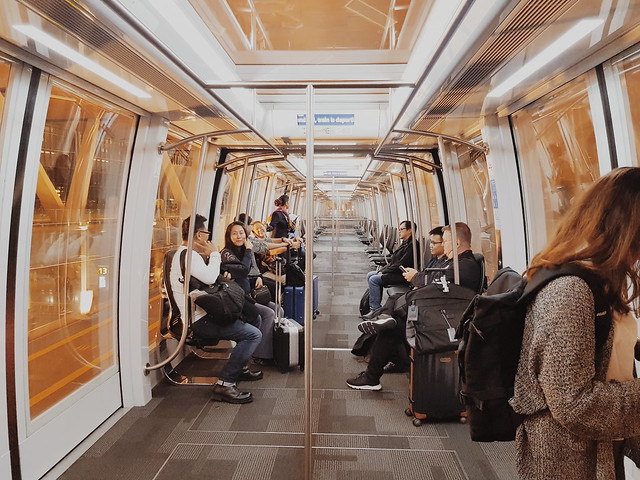 Whats up train
The airport is so huge that it can really take some time to walk from one end to the other, so I’d suggest checking your gate and distance once you land, if youre transiting. It’s also one of the only airports that dont make you go through security when youre transiting, which is nice. You do another round of security before you board your flight at the flight gate, but that’s about it.

It’s also a very comfortable airport to transit in because it’s full of 24/7 cafes and places to sit for free. There are also a lot of quiet rooms where you can get a reclined seat and lie down to nap if you’ve got a long transit. Just be sure to set an alarm so you wake in time for your flight! There’s free wifi that’s mid-speed, and they also have free carts for you to wheel your stuff around if you have a lot of hand baggage. Dont take this for granted because some places AKA AMERICA makes you pay for baggage carts!

The Qatar business and first class lounge is very huge and beautiful, and it’s basically like living in three hotel lobbies combined. I was really excited to explore it because I love lounges, probably because they’re a premium product and I am a KID who just wants to try everything and get a cheap thrill from knowing that it’s a premium product, lol.

The first thing I did was go take a shower because I’d just come off an 8 hour flight and I had another 6 hour leg to go.

There are two shower facilities there, and it’s like a little room for yourself where you can store your clothes, take a shit, and shower. It provides fluffy towels, hand towels, floor towels, etcetera etcetera. The soap they use is like, good stuff. It’s all RITUAL products and they also provide body moisturiser. I am really excited about all this because some time last year I paid to take a shower in the Bangkok airport and it was expensive and the towels were stringy and weird and the soap was weird and the shower room was dodgy, like cleanliness wise. So this really impressed me is what I am saying! 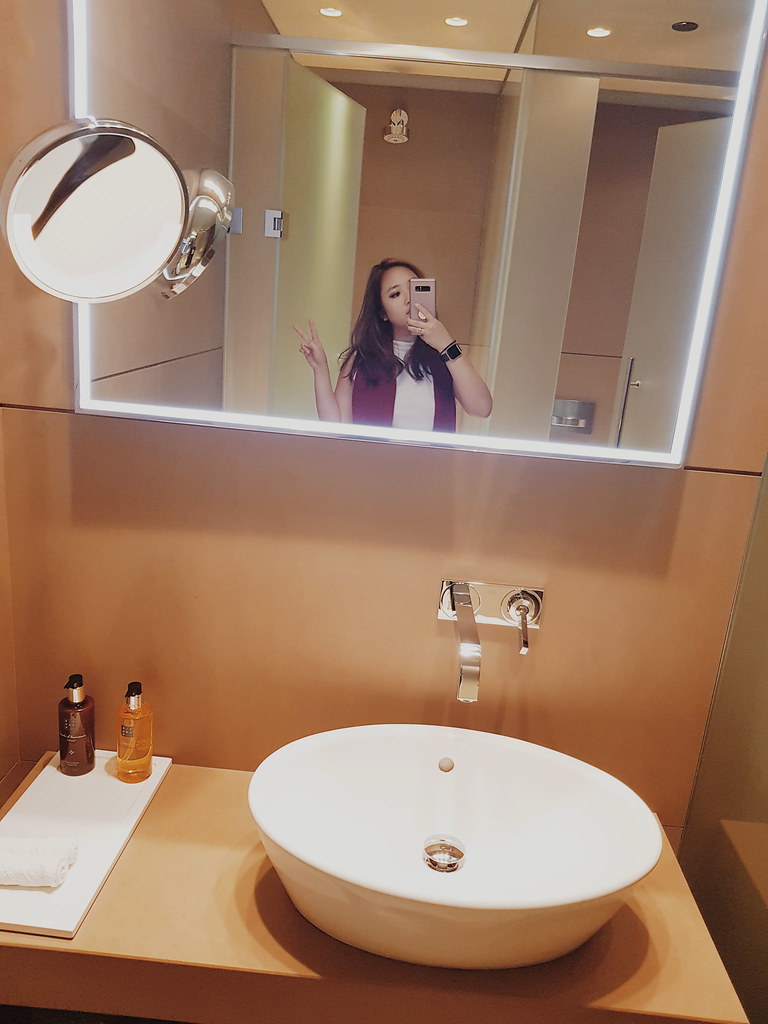 In my private little shower room 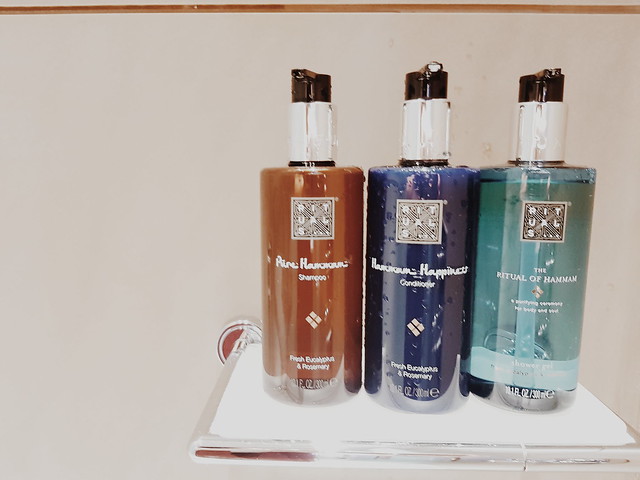 Fancy shower stuff
I asked for a toothbrush set also so I could brush my teeth! You can also ask for a hair dryer if you need one.

Oh yes. I stored my hand luggage in their very pretty locker room whilst I went to shower. That was a nice touch because I didnt want to leave my bag on an empty seat and risk having it stolen, or bring it into the shower room with me because that’s weird.

After that I went to walk around and jeez please remember to wear your fitbit if youre walking around the lounge because a tour of the lounge alone is like a thousand steps or something already!

There are SO many places to sit, and of those places, many of them are little enclaves so you get privacy while chillin by yourself. They also mostly come with charging ports, and little iPad looking thingies that you can use to browse the internet with or check on your flight details. There’s free wifi in the lounge, but again, it’s not super fast. If you do need super fast internet, the lounge has a business center, I guess cos some people are workaholics and want to set up meetings while they’re in transit or whatever. 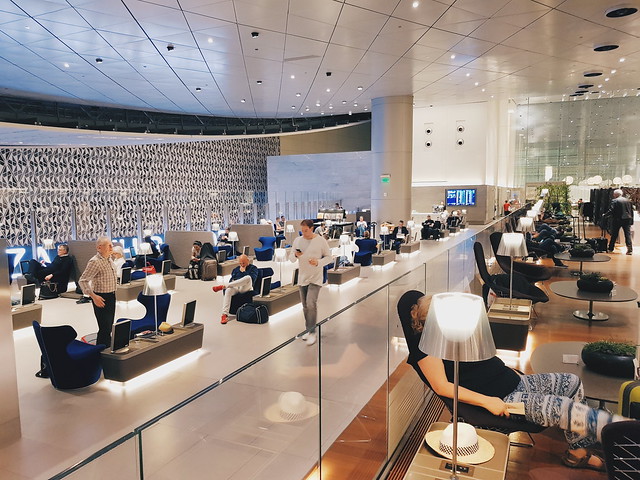 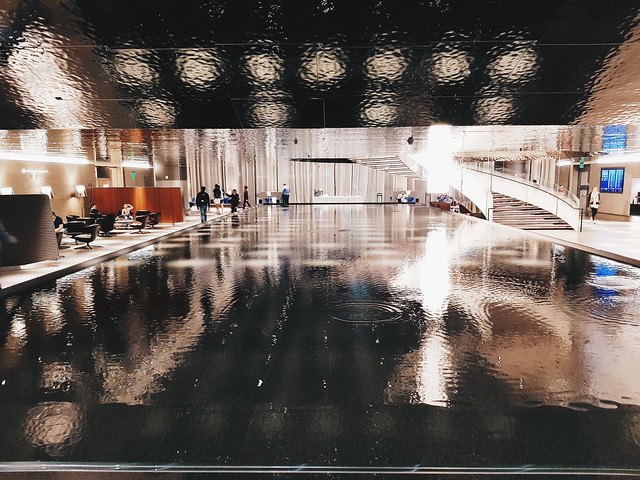 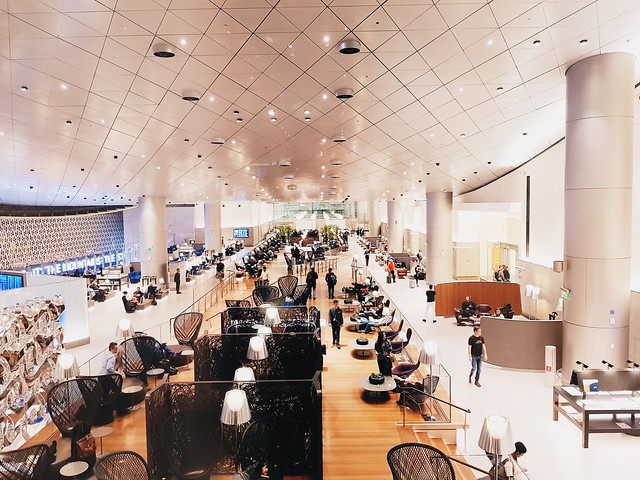 View of the lounge from the second floor
There are two official eating areas, a cafe for ‘light’ bites, and a full on hot food area that’s on the second floor and looks more like a hotel restaurant. 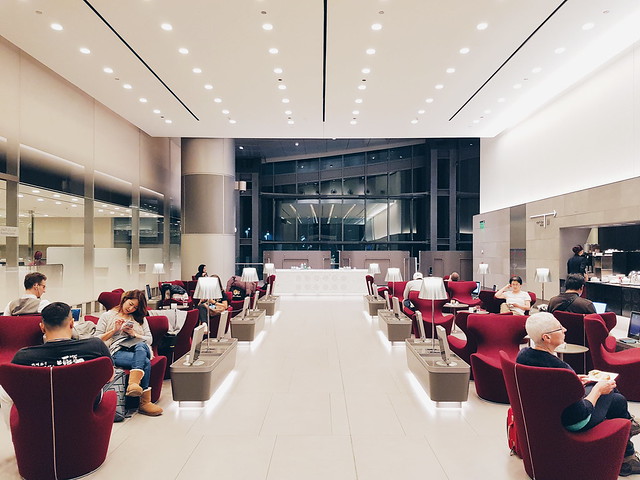 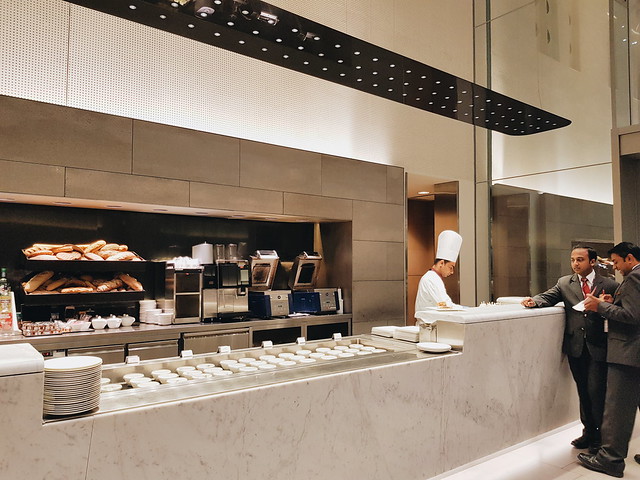 It says light bites, but actually the food is quite substantial.

Besides the two official eating areas, there’s also a cafe area for drinks, and also random drink stations with tea and coffee around the lounge, I guess because the lounge is so big that you might get thirsty walking half way? I dont know.

There’s also a game room, just because. Unfortunately I was alone and so had no one to play with, so I just took a photo and moved on. 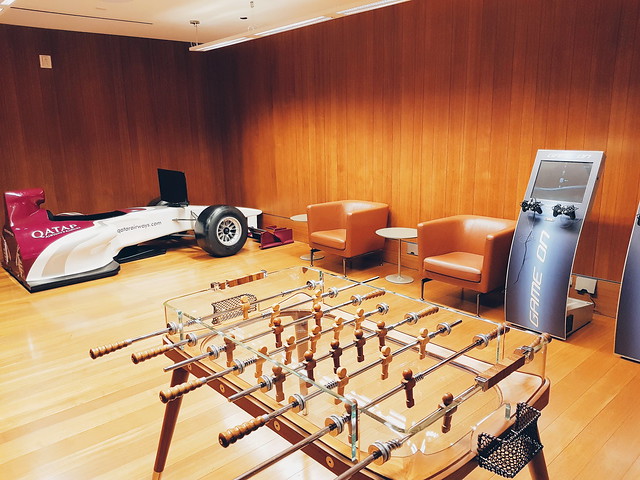 Mainly two player games. Oh well.
Oh! This is my favorite bit. There’s a lot of space for you to sleep if you have a long transit! There’s a quiet room, where you can check in and nap, and the staff will wake you up when you want them to. As with most lounges these days, they dont do boarding announcements, so you have to keep track of your flight details yourself. So this option is pretty cool if youre afraid you might oversleep. I didnt take a photo of this because it was full of people sleeping and I didnt want to be rude, haha.

There are also many little cubicles that look like futuristic trailer houses out of a muji catalog. They’re mainly single or two-person recliner seats that you can sleep in with some privacy, which is something I really like because I’ve spent many years curled up in weird positions in airports all over the world haha. Please see: 24 hour nightmare in Stansted. 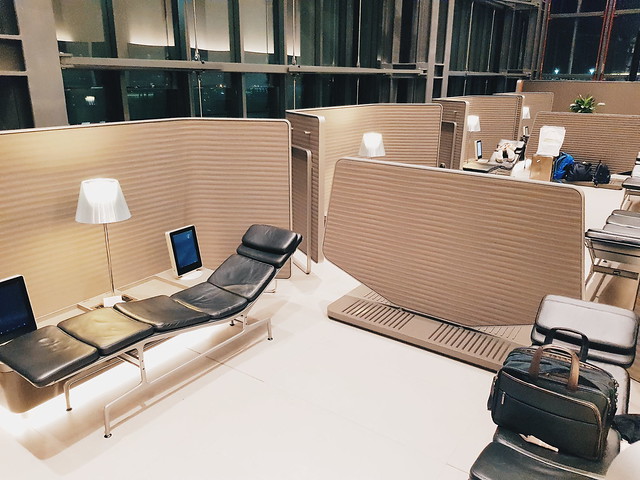 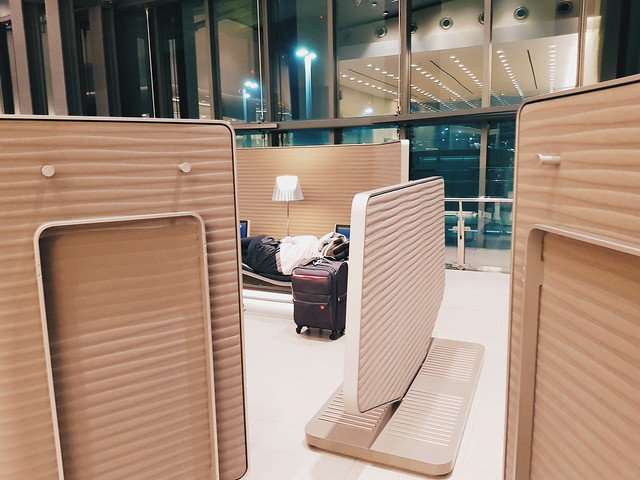 Anyway! After walking around and exploring the whole place I decided to go get some food and work done in the restaurant area. It’s on the second floor of the lounge, and it’s really huge what the heck. I walked up these giant spiral steps to get there and when I got in I was like, really, is this lounge ever at full capacity?!

I’m not complaining though. It’s really nice. The dining area has many different options of seating configuration depending on your group size, and a bar if you’re someone who knows how to be happy. Lol, Im joking. Half. Anyway, I got myself a seat by the window, a super comfortable sofa chair with a table so I could work. I wasn’t super hungry so I just got some snacks to try – the hummus and pita bread (love this, I really love dips so things like pesto and hummus are the bees knees for me), some butter chicken (pretty good) and some seafood penne (it was ok, I didnt finish this). The food’s not bad for lounge food, though I have to say that the Singapore Silverkris lounge has better food 😀 teehee. 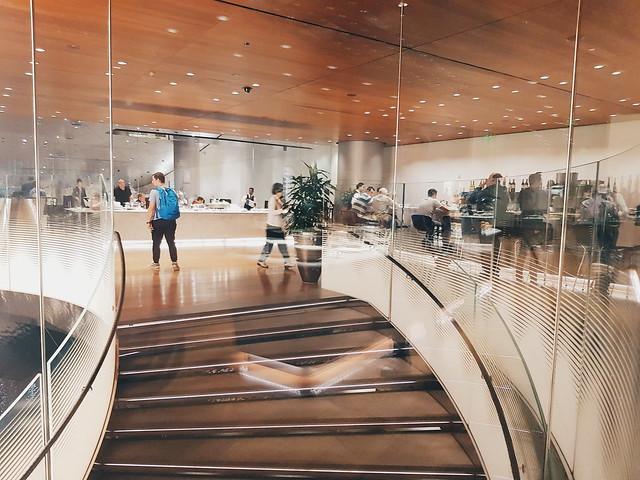 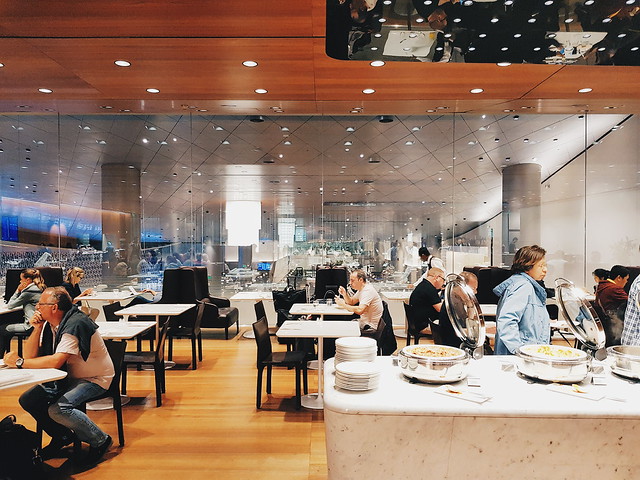 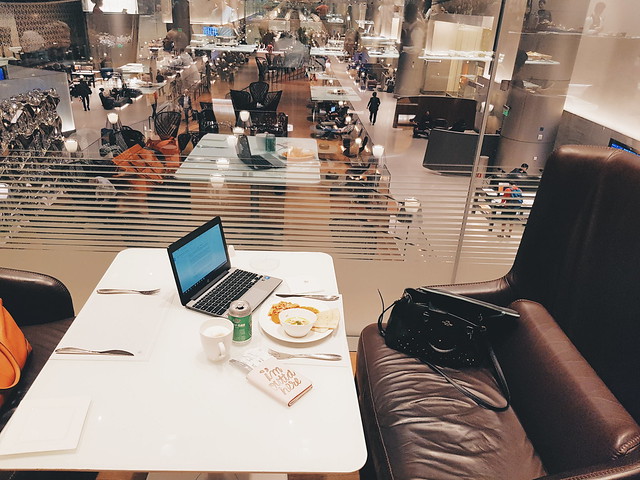 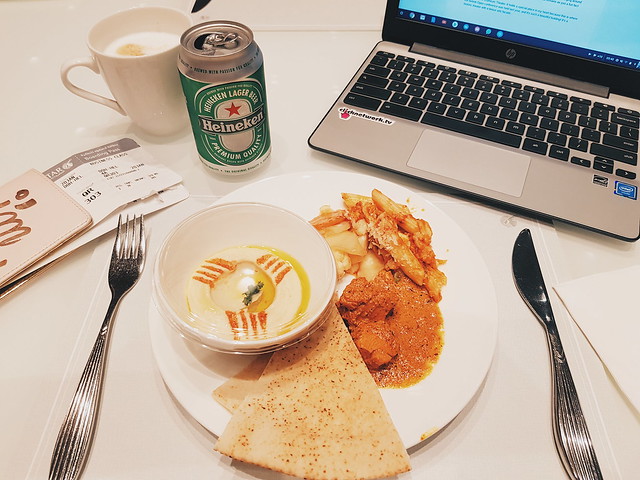 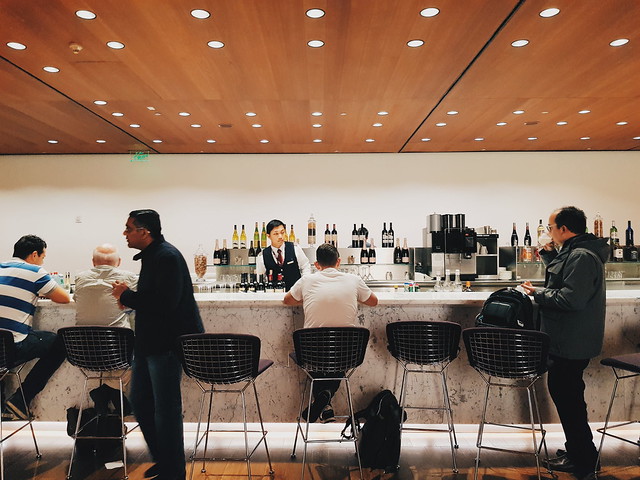 I was pleasantly surprised by the appearance of a bar – wasnt sure if there’d be one in Qatar!
Anyway after that it was time to go, and that brings me to my last point – the airport is so huge that it takes a substantial amount of time to get from the lounge to your gate. So dont forget to factor that part in!

Overall: a great experience, wish I had more time there because I’d totally want to take a nap in the quiet room. All the staff I met were super duper nice and friendly, and I really felt like they were genuinely warm and friendly although I know that objectively they’re probably just doing their job. So that’s 10/10 for their service staff training programme is what I’m saying.

This is probably one of the more worth it lounges if you’re on one of those traveller schemes and thinking of where to redeem your lounge pass access. I’ve been blessed enough to visit quite a few lounges, and this one stands out in terms of the variety of things they offer (good showers, napping spots, game room) and comfort levels.