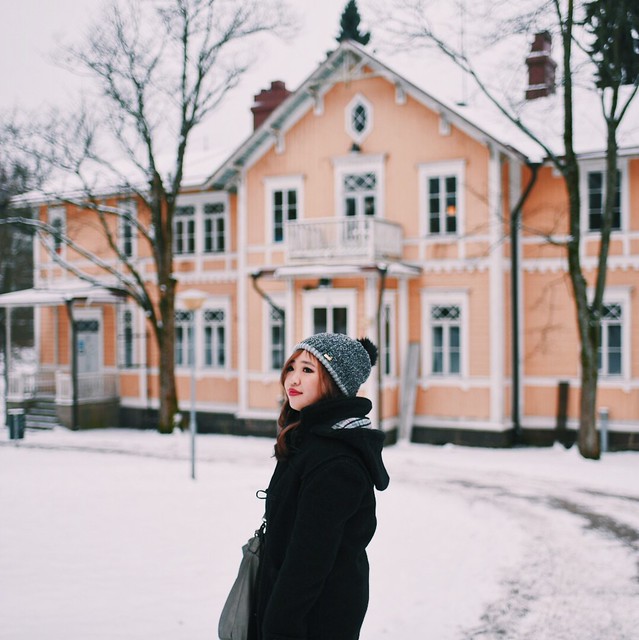 I was in Helsinki last week and happy to be there – it was my first time experiencing a legitimate, full blown winter, complete with snowflakes and blizzards. Every other time I’d tried to catch a good winter I’d been met with shrugs and sunshine, and it had gotten to the point where I’d settle, I’d settle so hard, for even the slightest hint of a flurry. So when a press trip to Helsinki came on the table I’d jumped at the opportunity. Thrilled. And it felt, for a moment, like everything had come together for one perfect winter week, just for me. The snowfall had started a day before we touched down, and it lasted only the week we were there, turning very quickly to rain and slush the night we left. But more on that another time. Touchdown Helsinki and the ground had been covered with christmas log-cake icing as the plane taxied in. I was trying very hard to keep my cool because I was with so many people I didn’t know but that lasted about five minutes: the next day I was jumping into snow piles and giggling every time snowflakes started to flutter down from the sky, and I thought to myself many romantic things about serendipity and how some things were worth waiting for.

I was very happy, also, to be alone on this trip. I mean I was with people and they were all very nice but it was my first time meeting most of them and didn’t know them well. And so emotionally I was essentially alone. The past couple of years had been so noisy for me that this isolation was very welcome, and I spent a lot of time walking around the city by myself after the day’s activities had ended, or waking early to stand outdoors and wait for first light and snow. I read a lot. I took long baths. I spent time at night writing and watching the tele, and sent photos of the day’s happenings to my boyfriend at home, who replied with the soccer scores of the moment. Time flew by, and days exceeded my expectations, and I adored the city more and more each day.

On my last day I woke up to a blizzard outside my hotel window and thought to myself it would be nice to have hot soup. Hot asian soup, specifically. We’d been staying in Hotel Haven, Helsinki, which was planted right opposite the harbour and traditional food hall, and someone had pointed out a pho store there when we’d done our tour of the place several days before. As the trip progressed, the others on the press trip referenced the pho place more and more frequently, and with increasing levels of wistfulness. I was amongst my kind! Asian soup lovers. Nice. But as a result, I couldnt stop thinking of the pho. I made stupid pho puns in my head and salivated. I loved the snow but I couldnt stop dreaming about how the snow experience might be enhanced by contrasting the crisp chill air against a hot bowl of pho.

Anyway, all this is to say that to nobody’s surprise, I went to get some pho.

What a great end to my trip, I thought to myself, as I braved the blizzard. It was snowing so heavily and wetly that I couldn’t tell if it was snow or snow mixed with rain anymore. My hair was drenched and sticking to my face and I visualised myself sitting at the counter of the pho store eating the pho and knowing that life was made of small perfect moments. I swear, I almost ran to the store. There were already two other people there (asians!) and I wanted to say hello but they didn’t look very friendly and anyway see above re: happy being alone. Instead I asked the counter girl for pho. She chattered back at me about options and flavors and side dishes and all I could think of was OH MY GOODNESS SHE IS VIETNAMESE. I was SO ready for my bowl of pho, which had by now grown in my head to become the best pho I had ever eaten, keeping in mind the authenticity of its origins and the juxtaposition against the snowy weather. 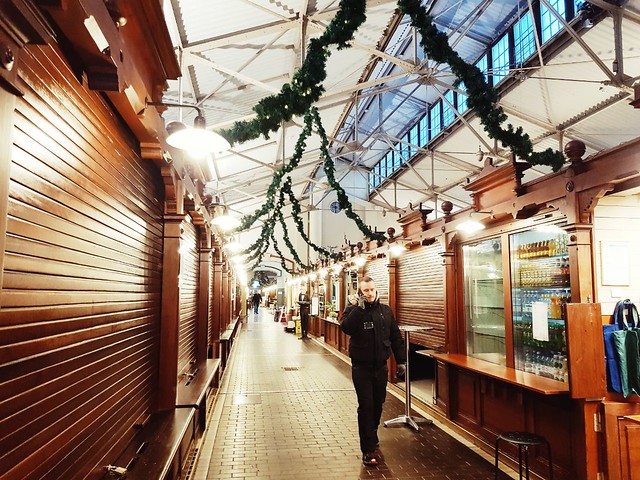 Everything else in the market hall was closed! 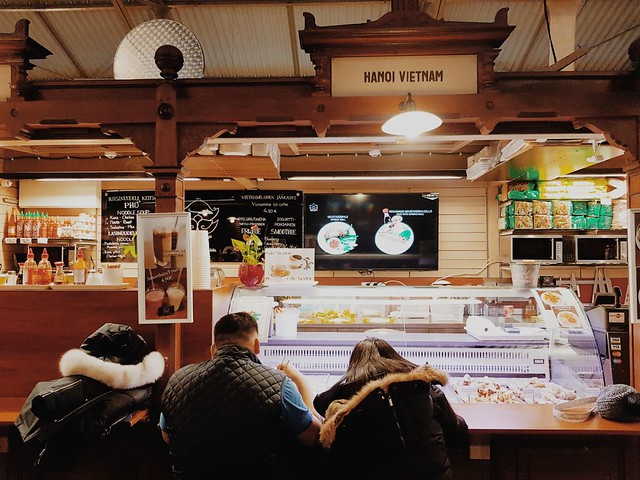 I ordered a bowl of pho with a chicken / beef mix. It was 9,90Euros. She nodded, took my money, and gave me some siracha. I do not eat siracha but got very excited about this because siracha is AUTHENTIC ASIAN. I pulled a chair and sat down. I resisted talking to the other asians about how amazing globalization was. I was nearly bouncing in my seat, I swear. The counter girl was making salmon summer rolls while waiting for my pho to be done, and there was a little sign advertising vietnamese coffee for 3,90Euros hanging by my head. Everything signalled to me that this store hidden in the corner of the Finnish market hall was an enclave of Vietnamese culture. I was SO ready.

The pho came, in a clear bowl and with less garnish than I’d expected. I have not been to Vietnam so I thought perhaps this is how pho is meant to be, and we’ve been smothering it with unnecessary flavors our entire lives. Bite one and I felt the soup steam up the insides of my chest, I wanted to cry, I was so moved, etcetera etcetera. Bite two felt the same. Bite three and I realised that what I had tasted thus far were the expectations that I had seasoned the bowl with, and which were quickly melting away to uncover the mindblowingly mediocre bowl of pho that sat before me.

It became apparent at this point that the unfriendly asians were bitching about the pho next to me. They were, in fact, on the verge of an argument: a girl had yelp on her phone out, and she said, there’s another pho shop nearby, told you we should have gone there. The guy looked at her phone and said: that’s this shop, stupid. She said, dont talk to me like that. They left without saying bye to the counter girl, who was still rolling her summer rolls and humming to herself.

So that was that. Now it was just me and the bowl of pho. At this time it was 9:45am and my lobby call for the day’s itinerary was 10. I took another bite. It wasn’t bad. Bad food I could abandon without guilt. It was just mediocre. The rice noodles flopped around in my bowl, I pushed them around with my chopsticks and watched the strands stick and unstick against each other. Because it wasn’t point blank terrible I could not justify not finishing it. My asian values, which had motivated my morning pho run, were now turning against me. I heard my mother’s voice: finish your food, dont you care about the starving children elsewhere, how did i raise you, etcetera etcetera. I took another bite.

The bite brought me no joy. I thought of Marie Kondo and how she said in her famous Decluttering Your Room video that all things in your life must bring you joy. The idea of hot pho brought me joy, to be sure, but then again I also was reminded of people I knew who were in love with the idea of being in love. Stop eating the pho, I told myself. But as I raised my head from the bowl, my eyes met those of the counter girl, who smiled mindlessly at me, and I felt arrested by guilt, and took another bite. 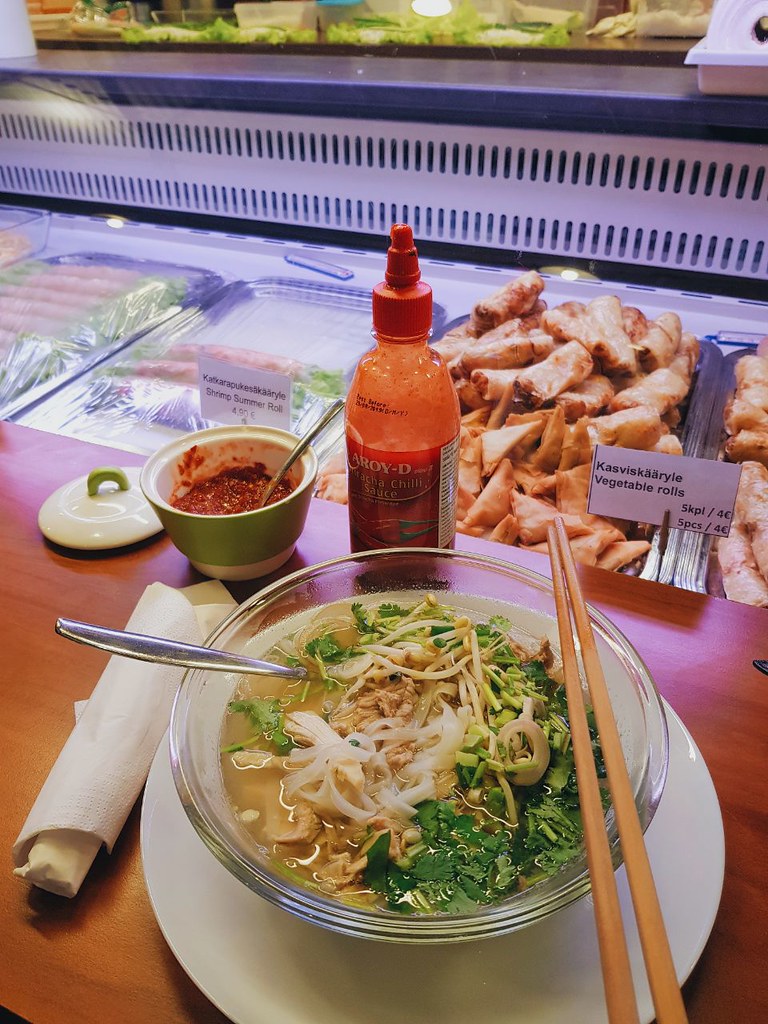 At some point I found my mind wandering towards to Euro, and it occured to me that I had just paid sixteen singapore dollars for this bowl of pho. A set meal at Nam Nam, a vietnamese chain in Singapore, was 8.90SGD and came with a free coffee and two summer rolls. Plus the pho there was yummier thanks to MSG, which meant you’d be happier eating it, but all your hair would fall out sooner. Comme si comme ca. I felt offended and ashamed at my financial missteps and thought perhaps it was a good thing after all that I did not buy into the bitcoin, because obviously I would lose everything I owned, as I could not even invest sixteen singapore dollars properly. The hotel breakfast had been free, but I had ignored it in favor of the promise of good pho. I had better eat it then, I thought angrily, now that I’ve gone and paid sixteen dollars for the bowl. It didn’t even come with free water, I thought, and rage-ate another bite.

We were now more than halfway into the bowl of pho that I did not like. My best friend studied economics at some point, or something like that, because he worked in a financial consultancy firm in London for some time and therefore was always couching his advice to me in financial terms. One of his favorite things to say, which he also applied to guys chasing girls who they knew weren’t that keen on them, was the idea of a sunk cost fallacy, and if he were there in the pho shop with me he would have shouted: GIVE UP, IT’S A SUNK COST. WALK AWAY. But my best friend and I are not the same people despite all our similarities. I took another bite in spite of myself.

The counter girl’s back was turned, and I could make my escape, leaving a half eaten bowl behind. But I did not. I wonder about that sometimes, about not having taken my chance. Part of me was terrified that she might turn back and see my unfinished bowl, and ask me about it out of courtesy, or worse, just, yknw, not. And part of me still felt taken hostage by the money I had paid, the special effort I had made to wake up early, the blizzard I had happily braved. I told myself that this was not that bad, and that there were many worse situations than having undeniably hot soup on a cold winter’s day. I was in a gorgeous country with weather that had thus far only featured in my dreams! It was a great situation to be in. Complaining about anything just felt stupid and childish and petulant. But I couldnt help thinking: I might have experienced the same level of contentment had I just boiled some hot water in my room. And it would have been free.

I didn’t finish the bowl: I left precisely one mouthful uneaten. I dont quite know why. Perhaps it’s so I can tell myself that I didnt finish the bowl of pho. But that’s stupid. My reasons for doing that remain obscure even to me. I nodded a thanks to the counter girl, who asked if I wanted to also purchase a salmon summer roll. For a moment I was terrified that I wouldn’t be able to say no. But I looked at the glass bowl, then shook my head and walked out of the food hall and back into the cold.

Back in the hotel lobby and with the other people from the press trip, it came to light that three or four of us had visited the pho shop at various timings that morning. One of them was a celebrity chef of sorts. I asked him what he thought of the pho and he told me that beggars couldnt be choosers. I nodded along, but inside I was thinking: what a stupid girl I am, to make such a big fuss over a bowl of pho, when actual adults who’ve lived a life know how to gauge their happiness against the desperation of circumstance. What a way I have to go.