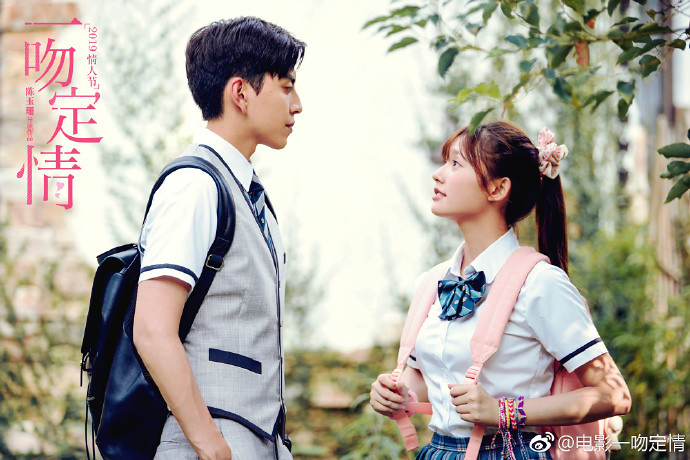 So tonight I caught what is possibly the stupidest show I’ve watched since Dylan Dog Dead Of the Night in 2010, and I was so mad I came straight home to write a post about it. The show in question is the 2019 remake of the very popular manga turned drama, It Started with a Kiss, starring Darren Wang and Jelly Lin, and till tonight I have never felt such a strong compulsion to fling a shoe at the movie screen before. Instead, bound by social conventions and niceties, I settled for sighing very loudly and rolling my eyes at every turn till my boyfriend told me to stop being a hater, which is why I’m here instead where no one can interrupt my tirade. Here we go.

The movie’s plot doesnt digress too much from the original drama, which admittedly, is very problematic in hindsight. I actually watched the original taiwanese drama back in the day, ten years ago now, and I remember being very addicted to it, which just goes to show that I had kind of mortifying taste. The story follows a girl who’s kind of stupid (her challenged intellect is actually a real and emphasized plot point in the show) and who is in love with the school genius who has an IQ of 200. Seriously, only in asia will you be a total king in school because you’re smart. But ok, we like our As and what not, so I can buy it. Anyway, said genius rejects her confession of love, but her house collapses in an earthquake and she somehow moves in to his (no surprises there!) very huge mansion because their parents were friends back in school. And although he is totally disgusted by her stalkerish behavior (at some point she actually sleeps with a pillow that has his face printed on the side), he eventually falls in love with her and asks her to marry him because – and I kid you not – “no one will ever love me more than you have”.

Lets put aside the total ludicrousness of the plot. If Koreans can have their alien boyfriends and the Japanese can have their custom made robotic boyfriends, then fine, we can have an earthquake that forces the female protagonist to move in with her school crush. Whatever. And I can even close an eye to the bad acting and the incredibly irritating romanticizing of this puppy dog behavior where a girl stalking a guy around the school is seen as cute and somehow persistently romantic instead of actually creepy and kind of maniac. But I nearly lost it when the female protagonist, who’s one defining characteristic the whole movie was that she’s really stupid, was described as being a carefree romantic. She rocks up to the new house, meets her new foster family, and is mocked by a kid for being stupid. In that moment, the mother of her crush takes her hands, sighs, and says: “Actually, I always wanted a romantic character like yours. It’s better to live a simple, carefree life, you’ll be happier as a person.”

At this point in the movie I turned to my boyfriend and said loudly: “When are they going to stop equating total stupidity to an actual romantic quality? It’s kind of totally insulting for everyone involved.”

And he was like: “Jem this is a movie theater, keep it down.”

But the more the show went on the more upset I got. The show’s writing never gave the actress a chance to introduce any sort of complexity into the character – she continues to faithfully be the wide-eyed, melodramatic girl who laughs cutely when she gets 9/100 for math because she’s so cute that it hurts her brain to study. She devotes her entire existence to the material comforts of her crush, running out into the rain to give him a blanket (even though he had an umbrella and a jacket), stalking him when he moves out of the house to make sure her romantic rival isn’t spending the night at his new place, and even staying up late to sew him some kind of voodoo exam charm before his SATS in a show of support. Of course none of this is done quietly: she appears at his exam venue looking all wraith-like, her dark eye circles a physical stamp of her devotion to him, and promptly faints from exhaustion, getting knocked over by a car and causing him to miss the exam so he can get her to the hospital. She only deviates from being this nonentity of a person once, which is to stand up for another friend of hers (who’s obviously also secretly in love with her) when her crush is characteristically cruel to him. She says: I regret liking you, I’ll go to university and move on from you.

And he corners her, forces a kiss onto her, and says: oh yeah? You think you can move on from liking me? Right. And walks away.

The worst, totally offensive thing about that whole farce is that it quite clearly wasnt set up as satire, and nothing about the scene possessed any kind of timely self-awareness. Everything about the lingering camera pull, the background music swell – hell, even the totally cinematic golden hour lighting for what is supposedly a midday occurrence, suggested that we find this moment to be a romantic one, a show of hidden affection for her, a win in the larger scheme of girl-likes-boy.

No. Take your win, and stuff it.

The problem with framing stupidity as a cute, romantic quality is that everybody loses. Girls lose, because in performing this utterly brainless behavior that orients itself around the movements of a man, they have no chance to cultivate any sort of self-respect. Boys lose, because instead of being allowed to develop thoughtful relationships with women, they’re socialised to mentor and encourage this flouncy behavior in their potential partners. Society loses, because millions of dollars invested into a first world education system is wasted on kids who’d rather prance around and make origami structures out of their exam scripts. Worse, when you frame stupidity as a primitive, instinctive quality that is seductive in its naivete, it validates a matching primitive response from the other party, which of course has been socially nurtured over the years to refer to a traditionally alpha show of force. In the absence of level intellectual engagement, girls swoon, boys take charge, consent flies out of the window, and we all have to clap and call it romantic.

At the end of the movie, when the boy realises that no one will ever love him as much as she does, and proposes to her, I felt this incredible melancholy settle into me. I felt sad because these are the romantic narratives that we have grown up with, that are not unfamiliar to us even as we revisit them a decade later. I felt sad because when there was an opportunity for a remake to improve upon the original material, even keeping in mind all that has happened in the world, the writers made a choice to present the same, dated narrative that has no doubt fed into international stereotypes of Asian girls being moony, giggly, and all about the man. I felt sad because these narratives are cute, they’re (unintentionally) insiduous in their cuteness, and so young girls will watch these growing up, and think that self-respect, intellectual independence, and love are mutually exclusive, and given the emphasis on romance the world over, many of these girls will choose the only version of love they are conditioned to know and accept. I felt sad because there are ways to preserve the innocent and all-consuming excitement of a schoolgirl crush without rendering it toxic, and the showrunners did not take that choice to deepen the development of the show.

Because let’s be clear: it’s toxic behavior. This show was a classic portrayal of toxic girlfriend behavior, except with a cutesy filter slapped on. When a man she likes rejects her, she can’t take no for an answer. When he tells her he wants to be left alone, she blackmails him with an embarassing clip of him dancing which she got from his mum. When his family’s business goes into crisis, she makes it all about her, and takes it upon herself to make decisions about how long he should work, sleep, and eat. When he stays late at work, trying to save his company from going bankrupt, we see her near tears, sitting by a cup of coffee she made for him, which he didn’t drink (or want). This inability to take no for an answer, and insistence on making everything about oneself is problematic behavior whether it’s performed by a man or a woman. Angling it as romantic, and writing this as a lead up to a happy ending, is an insult to all parties involved.

It’s 2019 people. Resorting to literal, low IQ that correlates to an all consuming devotion to a man is lazy and annoying character development. Maybe it’s time we demand more from our romcoms. Maybe, just maybe, it’s time for us to be totally radical, and stop framing an inability to pass algebra as cute.