#2087 | Sleeping alone in a foreign city; a love letter to solitude, safety. 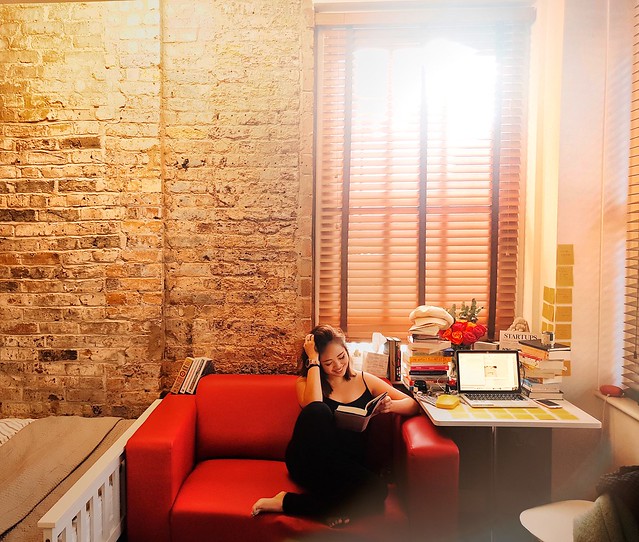 As someone who’s shared not only a room but a bed with two sisters her whole life I can tell you the peculiar feeling of having a room to yourself is a sort of quiet wonder. I was in London for a month and a half during the tail end of 2018, completing my editorial traineeships with Aitken Alexander Associates and 4th Estate Harper Collins London, and during that time formed an intense emotional attachment to my proverbial room of one’s own.

And what of this particular room? A month and a half was too long for any self respecting adult to reasonably impose on a London based friend, and hotels were out of the question (too expensive, too.. cold) and so short term apartment rentals were the way to go. I spent months prior scouring Airbnb for options and eventually settled on a studio apartment in Shoreditch for several reasons – proximity to both my workplaces, familiarity with the area (my best friend used to live on Liverpool Street), box-ticking all my requirements, and also just the fact that I really, really like Shoreditch for its buzzy vibe.

Over the last year in particular I’ve received many variations on the same email, asking how I ensure safety when travelling alone. That’s a post for another day, but here’s a little starter. Even though I’ve written a guide to picking Airbnb listings prior, the requirements obviously shift slightly when you’re travelling as a single woman, so some of the features that were especially important to me were:

– double lock: one at the entrance to the building and the other being my actual door
– corner room (so it’s harder for me to be followed even if someone else enters the building with me)
– first floor room (so only one flight of stairs to tackle with my luggages)
– bustling nightlife – I was actually living above a nightclub (so I would never, under any circumstances, be walking home in a totally quiet street)
– washer and dryer (so I could do laundry frequently without having to leave my apartment at weird hours unnecessarily)

It was also important to me to have a place with some natural lighting because I’m a tropical plant who flourishes under the sun, much to the chagrin of my dermatologist, so the corner apartment was perfect for me. I rearranged the furniture once I checked in to create a little sunlit corner where I could get my work done, and the amount of love I have for it is kind of ridiculous: 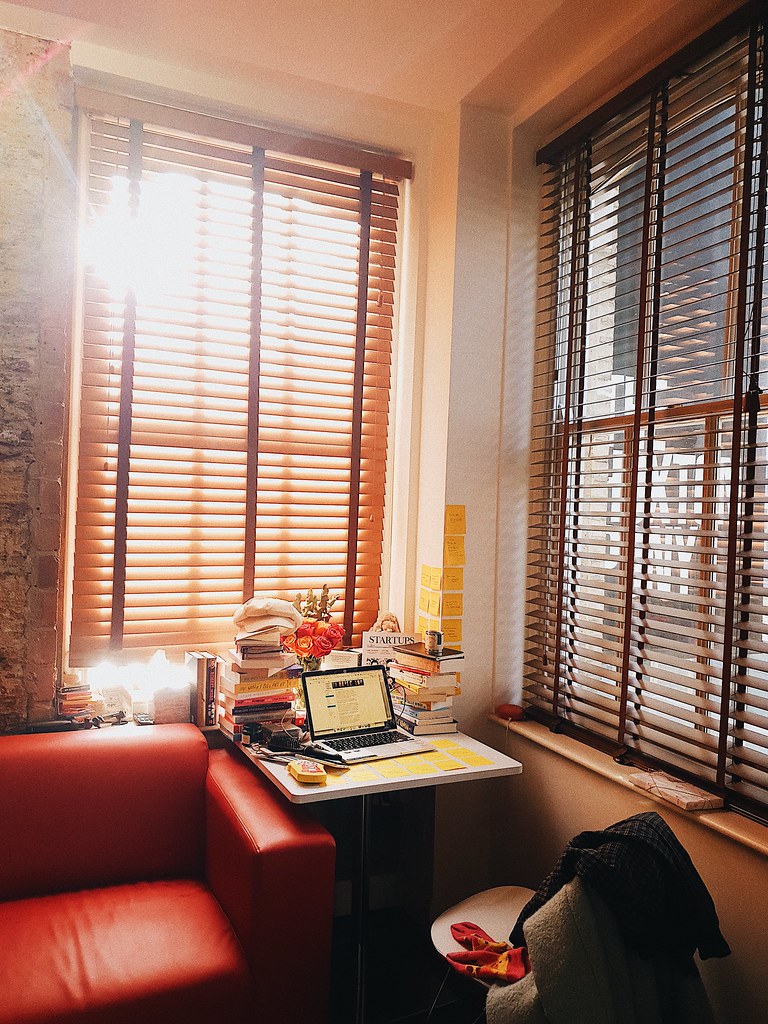 And thus I was all set! Many mornings I spent having a coffee there before work, shooting off Singapore bound emails, many evenings spent tap tap tapping off the keyboard whilst working on something or the other.

The kind of peace of mind one gets when living alone is unique in how all consuming it is, how it creates a kind of excitement that hums in your belly as you move about your new space. I read 29 books in London and hauled home another 65. With unprecedented space, both physically and mentally, I confronted a lot of work that had to be done. I signed up for two gyms – a 2 week F45 trial (20 pounds/week) a 13 minute walk from my apartment, and BLOK London (100pounds/30day trial), a 5 minute walk – and worked out from 630-730am every morning before work. I bought groceries from the co-op a 5 minute walk away, I cooked the same thing everyday and felt happy to have some kind of routine to hold on to. I set up my chromecast on the wall-mounted TV and used it only once, I set up my google home mini and spent most evenings reading to the background lull of sleep time jazz. I bought candles, I bought flowers (the columbia flower market a fifteen minute walk from me). I existed, happily. 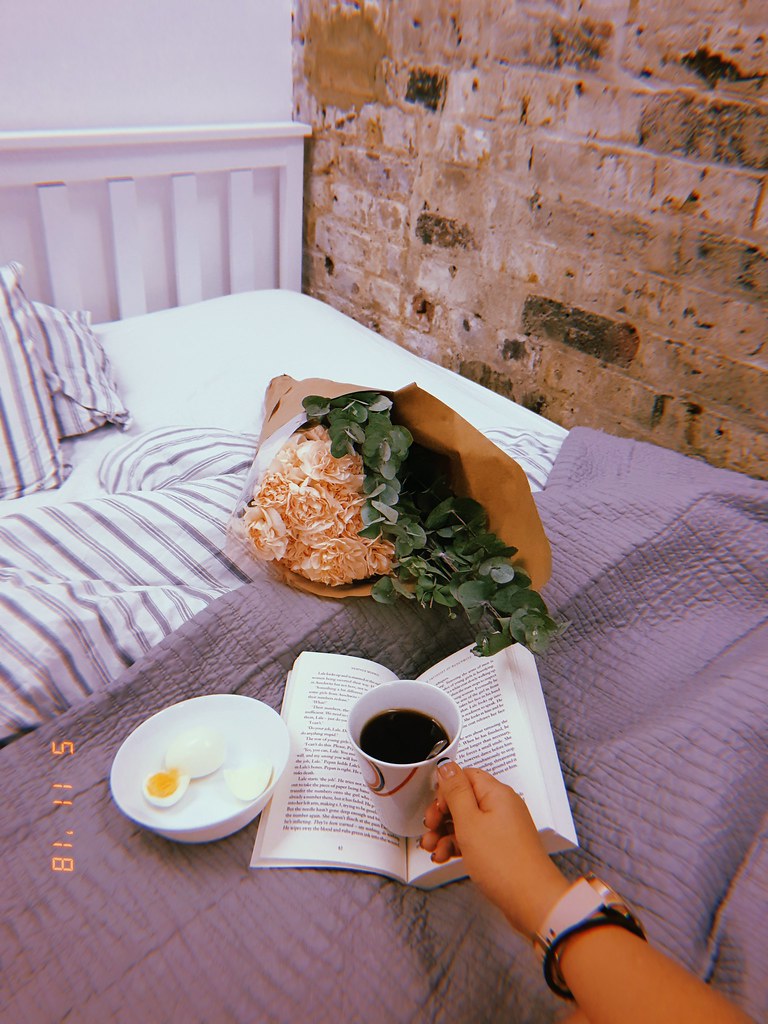 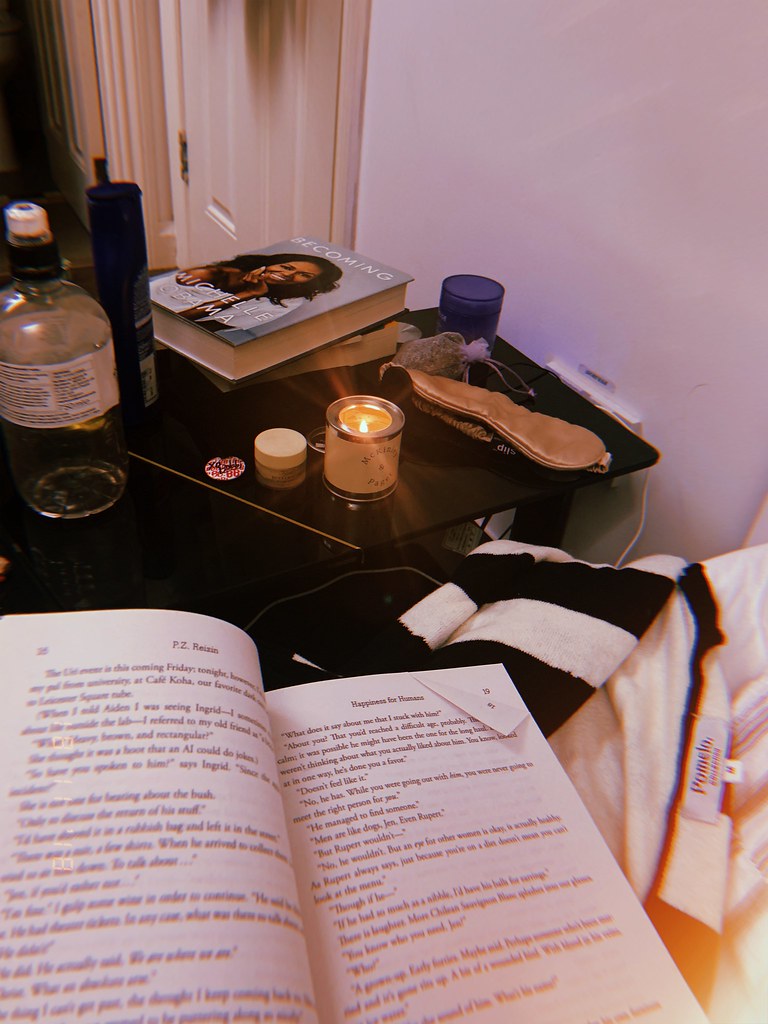 My queen sized bed (mine, mine, all mine!!) meant I could read on one end and sleep on the other: by the end of the month I was bed-sharing with about twenty books. The small bedside table was incredibly useful (i dont have one at home); I bought a little lavender packet from the flower market and left it there, I perched my night time skincare there on the table, lit a candle before bed each night. Tea, I drank a lot of tea in London. It was edging winter during my time there, so take the fuzzy feeling you get when imagining cozying up with a book with a mug of tea and a candle burning, and triple it.

I mentioned earlier living above a nightclub, which I was fully aware of before touchdown thanks to the multitude of airbnb reviews that you should definitely look at before booking any listing. I wanted to live above a nightclub: on one hand perhaps it provided a romantic grittiness, a sense of being in the hub of a city, on the other, it was a safety-related concern, which I know seems counter intuitive on first glance but actually made sense for me.

Having travelled both alone and in groups, I can confirm that one of the most terrifying things weaved into the female experience when travelling is a quiet walk home.. worse when it’s quiet and dark. I could more or less triangulate the location of my airbnb (they normally dont give you the exact location till you book) and prior to my trip had mapped the possible transport routes (for work, for socialising, for points of interest) outwards. There were two major busstops near my place (Great Eastern Street and Shoreditch High Street) which had brightly lit paths to my apartment, they also serviced so many buses that I could essentially get all around London without having to descend into the tube network more than cursorily if I so chose. This was a huge plus point for me budget wise because buses are significantly cheaper than tube rides, and it adds up. Same goes for tube lines – I was in between Old Street, Shoreditch High Street, and Liverpool Street stations, and had already determined that the paths from all of them to my apartment were main streets. Obviously nothing would guarantee safety, but all one can do is minimise opportunities for danger. Being a bit of an obsessive planner myself, these were all things I sorted compulsively before my trip, despite the slightly ditzy aura I know I carry with my person, leading to perpetual looks of surprise whenever I unfold my pre-travel mind maps..

The fact that I was above a nightclub (with another three or so in the area) meant it would always be noisy because in my experience, the concept of a weeknight has no bearing on a Londoner’s capacity to get turnt. This meant I would never have to walk home alone, there would always be security personnel outside the clubs (which is something people dont think about, ever), and even though I might have to sidestep vomit more often than I’d like, if anything serious ever happened, the sisterhood of tipsy partygoers would probably always come to my aid.

So at night: the chorus of partygoers formed my white noise, in the day: I got into podcasts, especially after discovering they could be casted to my Google Home. I listened to countless podcast episodes whilst making breakfasts and dinners, and then happily settled down to eat with a book. 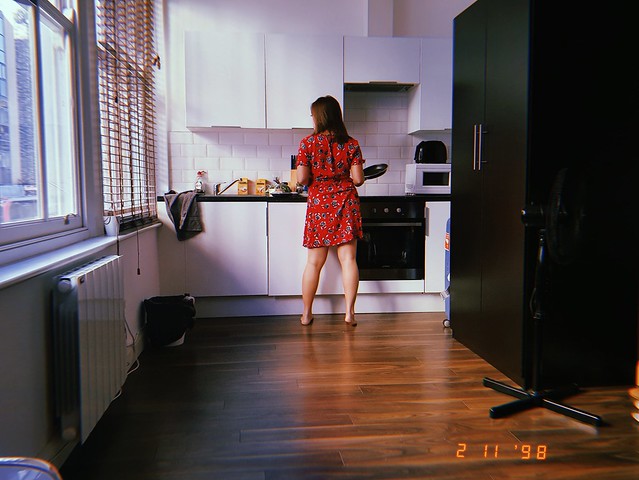 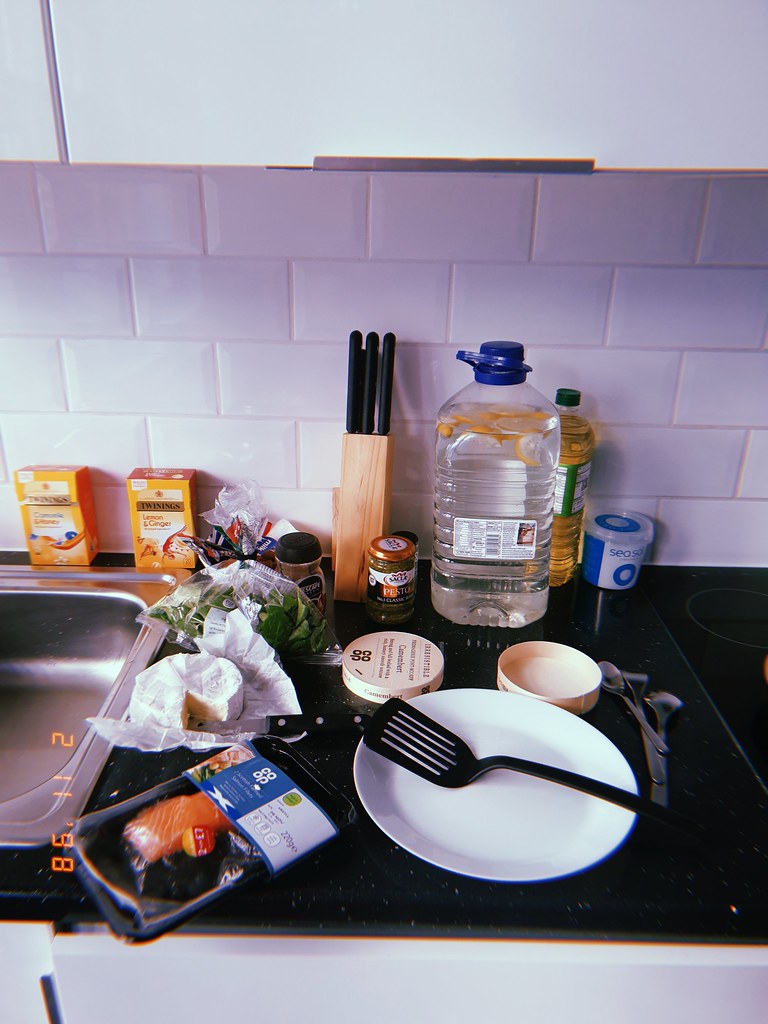 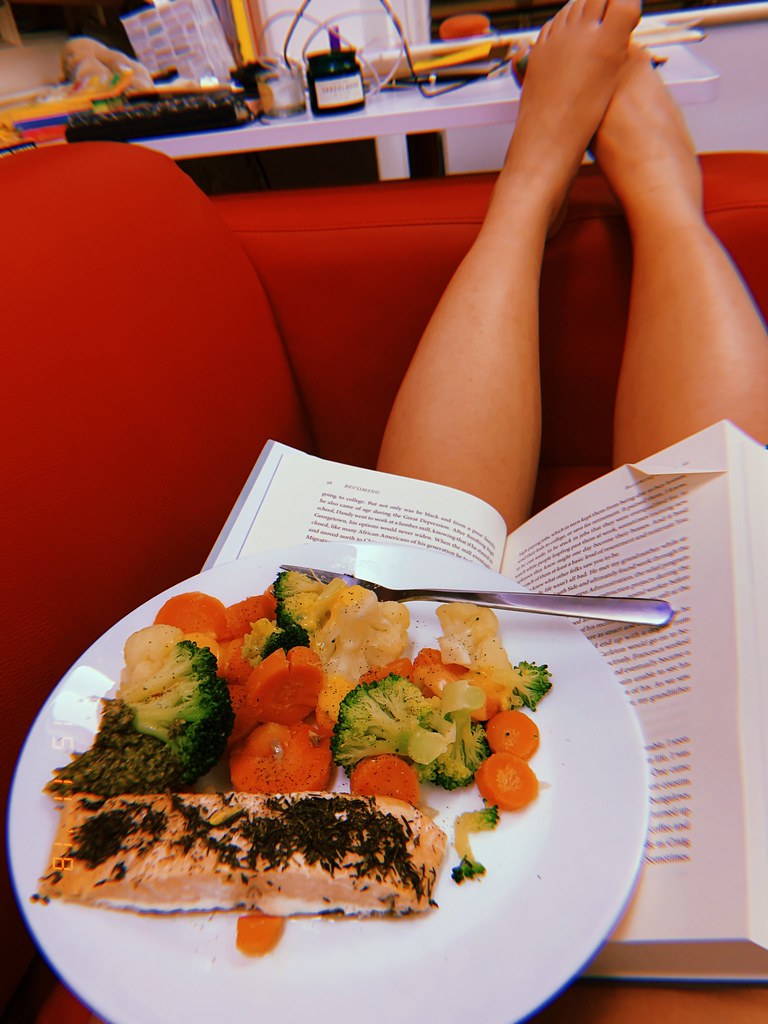 It was a nice surprise that my studio came with an oven in addition to a microwave, washer, and stovetop, meaning I could bake salmon without having the smell linger in the room for days afterwards. I remembered thinking that this place was so perfect for one, and I remember with some embarrassment how I congratulated myself heartily on having located this place.

Really, there was very little of the studio that I think I could have improved upon. It was essentially self sufficient, meaning I was never forced out by necessity, and each time I had to leave it was because of something I chose to do – go to the gym, to work, grocery shopping, to catch a musical. Amenity wise I think it had all a girl would need in a tiny, compact space – a huge wardrobe with ample drawers, a mini couch for pre-shower eveningtimes, lots of power points, fast wifi, a very space efficient toilet. 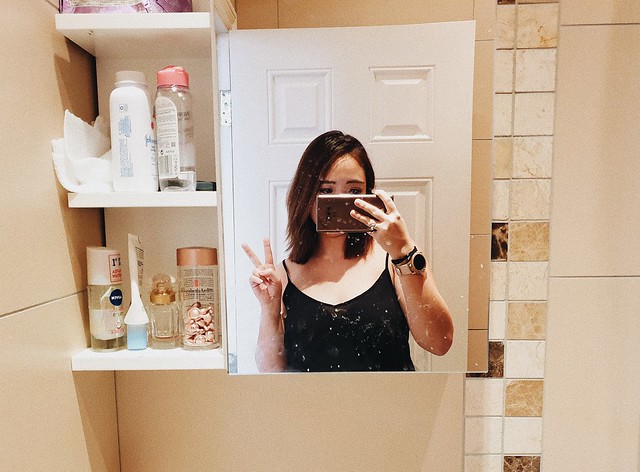 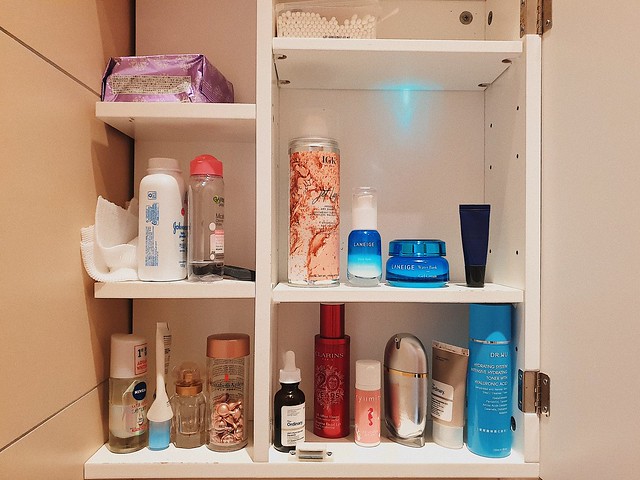 (I’d always wanted one of those toilet cabinets that hide things behind a mirror!) 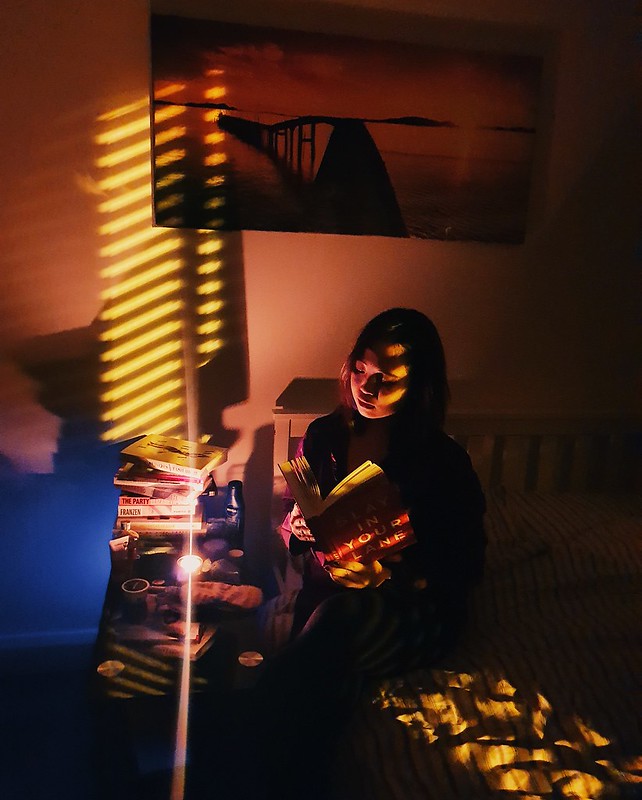 And of course, also how damn well located it was.

Perhaps the most unexpected yet amusing part of my life above a nightclub were the one sided conversations I partook in, the fly on the wall persona I adopted. In the middle of the night (usually thursdays or saturdays), fragments of conversation would waft up to me in my half-asleep state. Once I heard a girl scream she’s not interested you asshole which made me smile because girls backing girls will always make me smile. Another time: Nah, man, I’m not tired, are you tired, which was so clearly a lie. Once a fight broke out downstairs and I rushed to my window to peep through the blinds, it was a lot of posturing on the streets, like a cockfight that attempted to impress the girls looking horrified. But my favourite was the one time I woke up to the distraught sounds of an alcohol addled voice: I wanna call him man, I wanna call him and the responding chorus no girl – take her phone – what’s her passcode – dont give it back – give it back!

Lying in bed, I shook my head, half smiled, and said: Don’t call him, girl.

No one heard me. I went back to sleep.

Book the same apartment here
SGD35 off your first trip when you sign up for airbnb at airbnb.com/jemma