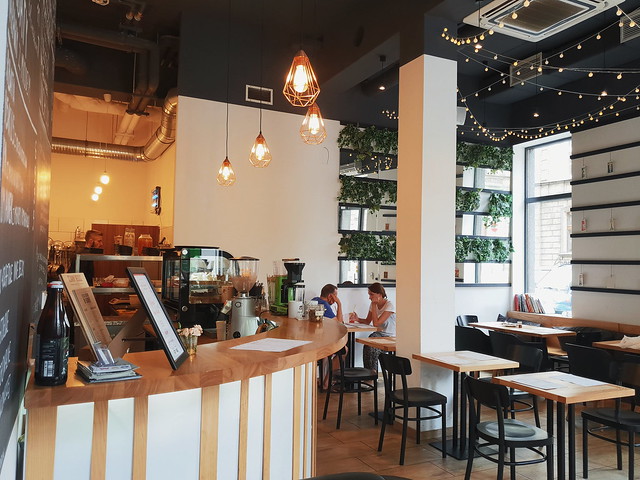 Hello from the obscure highways of Poland, with names i cannot hope to pronounce, all grass and wire, somewhere in between the town of Wroclaw, where I am coming from, and Krakow, where I am headed to on this 5.90Eur flixbus. I have literally had, just two hours ago, the most incredible focaccia, and i felt it my civic duty to open up my chromebook and wax lyrical about the wonders of carbohydrates once the bus had been settled into and was well on its way. And it is. So here we are.

Right across the street from where I stayed there was a tiny cafe called Folgujemy, recommended by my Airbnb hosts via a little printed note I found on my rented desk upon check in – please be quiet from 2200 to 0800, laundry machine is in the adjacent building, folgujemy has wonderful food. Listed like yet another fact of their listing. I briefly considered checking it out yesterday but I was distracted by the rest of the city, I thought, so what if I dont check out one cafe in a sea of many, no big deal. But this morning I woke up, lazed around in bed for a bit (a luxury!), and after packing my bags, realised that i had too little time to venture back to the Old Town for one last stroll, and too much time to do nothing at all before catching my bus back to Krakow. This and that and somehow I ended up dragging my luggage with me 200m across the road to the cafe in search of sustenance and coffee.

I was on the phone with Shane when the waitress came over to take my order, so i just pointed at one of the only things i recognized on the menu – shakshouka with grilled halloumi and toasted focaccia. When it arrived I was still on the phone and so i absentmindedly broke off a piece of the focaccia for dipping and put it in my mouth. Then it registered. Hold up, I told Shane, I gotta go. I gotta eat. Talk to you later. He was used to it; we exchanged affections, and returned to our own lives. 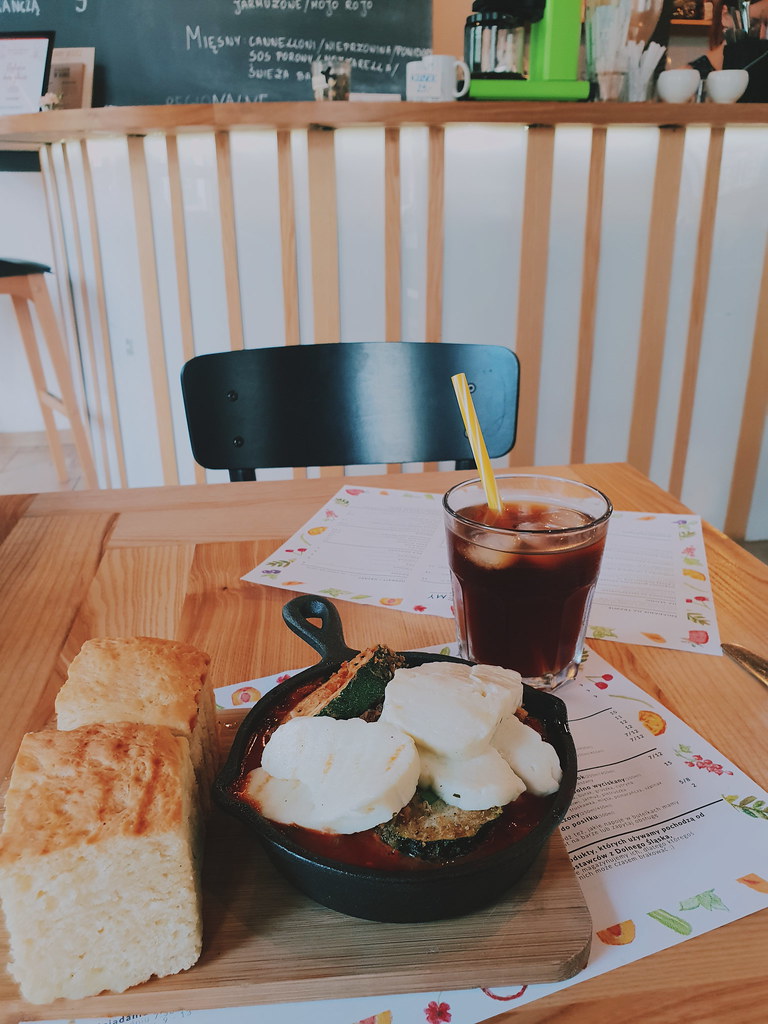 How good, you must be thinking, can a piece of bread be, to compel one to hang up on one’s partner? After all it’s just bread. The simplest of carbohydrates, tying with the potato for Most Basic Carb. But this bread was not just bread. It was crumbly crust, fragrant, denser than regular bread, yet lighter than cake. Obviously freshly made. I swooned. I am not a fan of bread in general becuse it has such a high propensity to disappoint, but I have been known to sniff the air around bakeries furiously, like some kind of beagle, also, do you know how amazing freshly made bread is, of course you do, when it’s done well it is a revelation.

The main point of the dish was the shakshouka, not the focaccia, but the focaccia stole the show for me. The shakshouka was very good though, one of the better ones i’ve had in recent years. I love eggs so it stands to reason that I would naturally take to shashuka. It’s not that prevalent in Singapore, for some reason we prefer eggs benedict as a nation, which i roll my eyes at, because most places don’t even poach their eggs ben right. Give me shakshouka any day. For those of you unfamiliar with the dish, it varies from place to place but generally means poached eggs in tomato sauce and various spices/herbs for flavor, and it’s usually served in a hot pan. The dish originates from Tunisia and is popular in the Middle east, which is where most of my favorite brunch foods are from, and in recent years I’ve noticed it as an option in many European cafes, finally finally finally. This particular variation was served with grilled zucchini and chopped spring onions, all of which i love. LOVE. The pan fried halloumi was excellent as well, which I think is partly because the chefs just really know how to handle their halloumi (it can go both ways, I’ve had really dry and tough halloumi in places), and partly because poland as a country produces lots of cheese, and enjoys having it as part of their culinary repertoire, so in general you wont go wrong ordering a cheese dish in Poland. 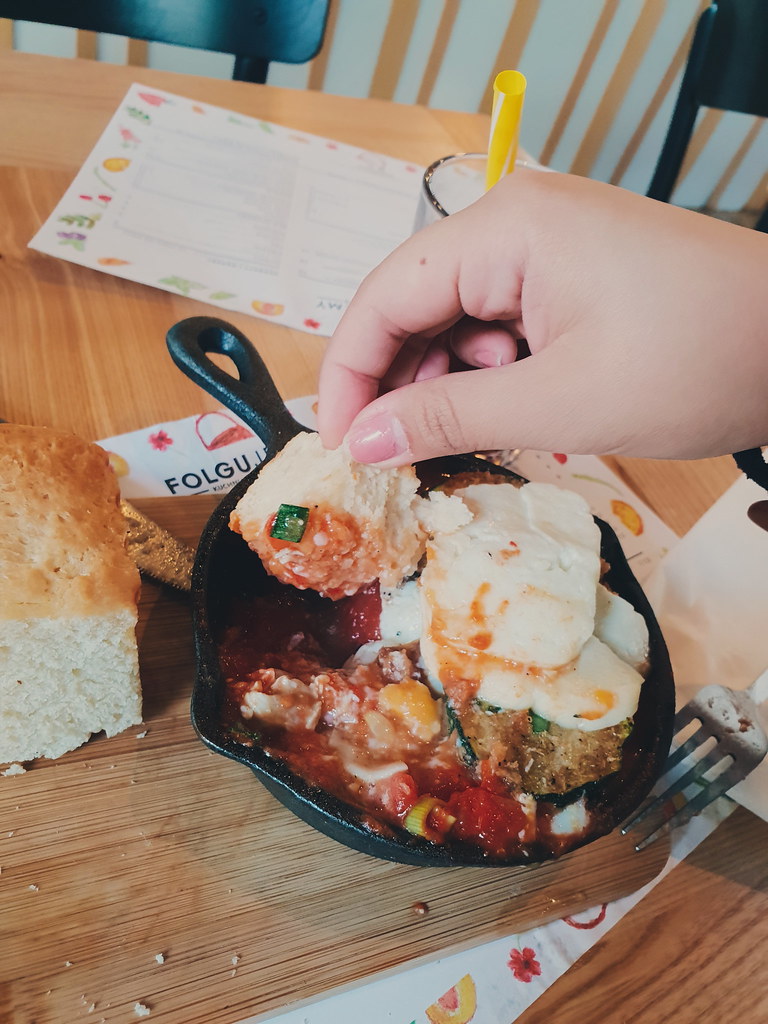 The mythical focaccia, dipped in shakshouka

So yes, what I mean to assert is, the shakshouka was superb. But I have come to expect excellence from eggs. Bread, though, bread is a wildcard. And this bread, ugh. It was like striking the bread lottery.

Later on as I got up to pay I tried to send my compliments to the kitchen, miming delight since I couldn’t speak Polish. The cashier replied in perfect English: Glad you liked it, we make our own focaccia in house. Ah. In more ways than one, I was enlightened.

Getting on the bus and penning this post I wondered at the point of writing a whole post about a tiny cafe in a corner of a far away city nestled 4 hours out from Krakow. But it is a city worth visiting, and a cafe worth hunting down for its bread. My faith in the carb is renewed, and for what? 35Zloty? A small price to pay for such delight. Thank you, Folgujemy. You will now forever be the standard to which I hold all bread to.