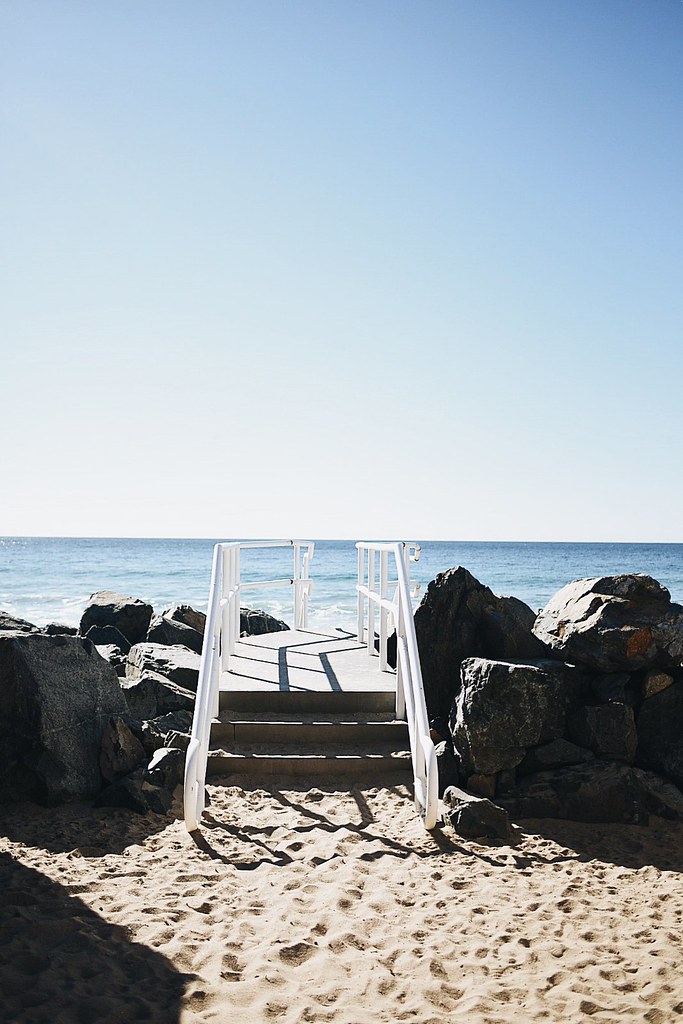 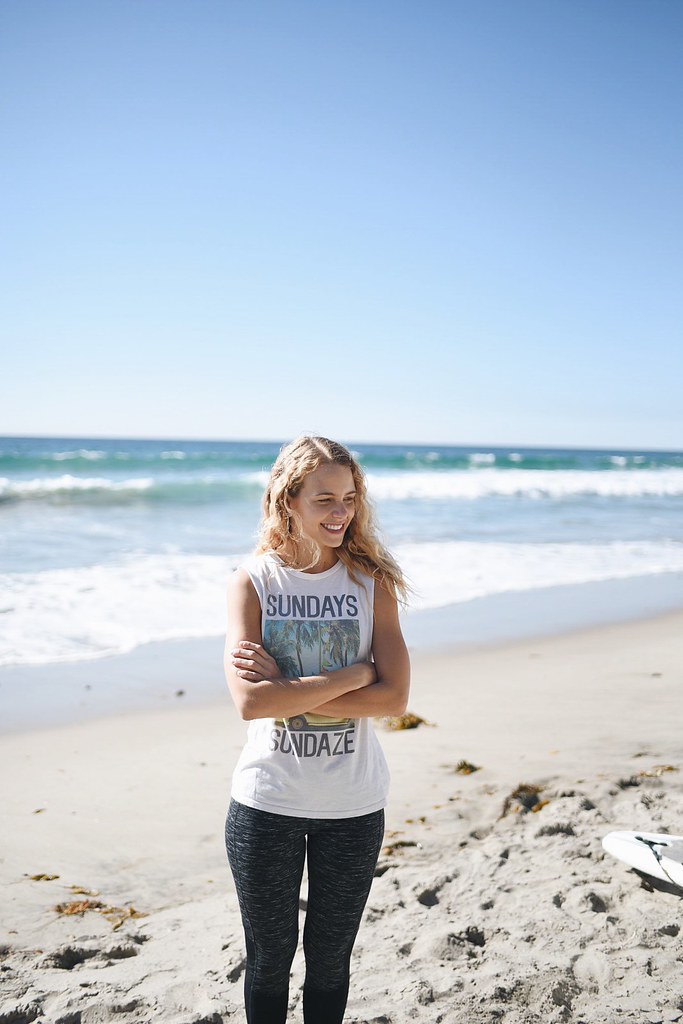 Malibu, Los Angeles
Following the announcement that caused a tizzy the world over, I signed up for my own Airbnb Trip Experience. More accurately, I got signed up – two weeks before I boarded for Los Angeles, I got a text from Elaine (from Airbnb) asking: So.. what are your thoughts on surfing?

If you’ve been a reader for awhile now you’ll remember that I learnt to surf on the Gold Coast, which I promptly realised that I both a. Loved and b. Sucked at. But you know me – just because I cant do it well dont mean i wont like trying. So obviously I replied LOVE IT without realising (in retrospect, a bit stupid – should have suspected it) that it meant that I would be going surfing. I was booked for The Adventureman by Quinn Carson in Malibu Los Angeles, a half-day version of the 3 day lifestyle immersion that he actually offers on the Airbnb app. I knew none of this till much later: all I knew was a time, date, and meeting point + notes on appropriate attire and a general idea regarding the nature of my activity. So an eighty dollar uber ride from Downtown LA later, and hola Malibu! 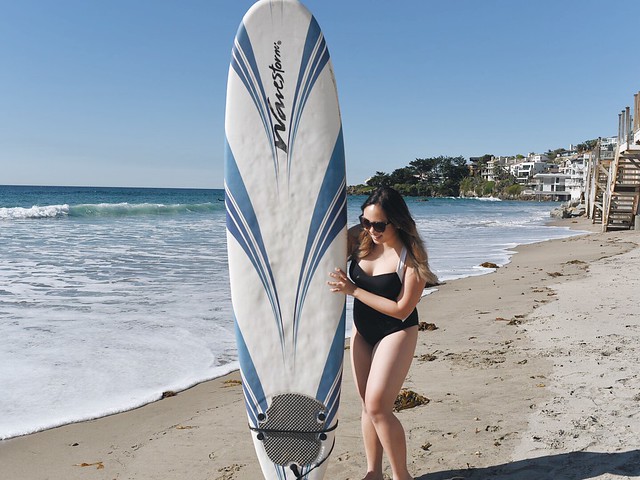 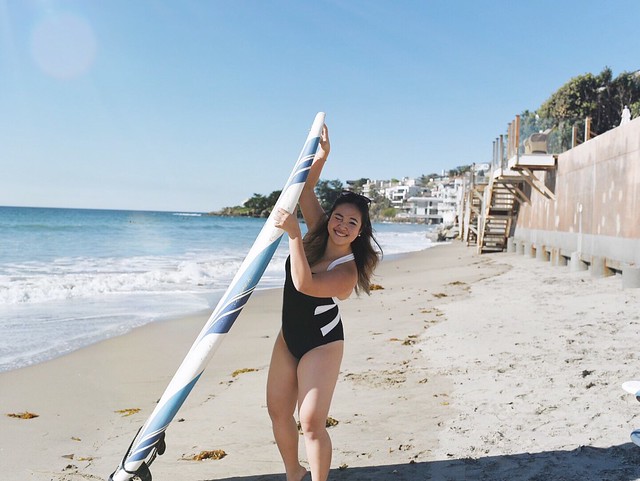 Malibu is gorgeous and also where the rich and famous live. “That’s Jessica Simpson’s house,” my uber driver pointed out, gesturing vaguely at a huge white structure as we sped past. Not remembering what Jessica Simpson actually did, I nodded and rearranged my face to look impressed. Finally he deposited me along a private looking beach, which i was genuinely impressed at, and drove off.

And here came my first fun fact, courtesy of my Airbnb Experience Host – all beaches in Cal State are public. This of course annoys to no end the rich people who want to think that their beachfront houses come with, well, private beaches. And it is hilarious because all I could imagine while trying to surf was the picture of a rich old man sipping his tea and trying to enjoy his 6 billion dollar view while determinedly trying to block out the fact that some noob looking asian tourist is crashing into waves right before him. Ha!

(Yet another example of the weird things you find out when you hang out with locals that differentiate your experience from the typical tourbook one. The knowledge that you’re the bane of some rich dude’s existence thanks to Cal State law. We must all rebel in the small ways that we can.)

Previously mentioned Airbnb Experience Host was called Quinn, and he and his friend took us for the day. We were a strange, assorted group from all over – there was a tv presenter from Auckland, a fashion editor from Germany, two journalists from Italy, a tv-writer from New York. And then me, the postgrad student blogger? instagrammer? online presenter? bookworm??? Even I dont know what I am. English majors, you will quickly find, have big philosophical struggles with issues of identity. But we were all level at that point, facing the waves, and going oh shit. 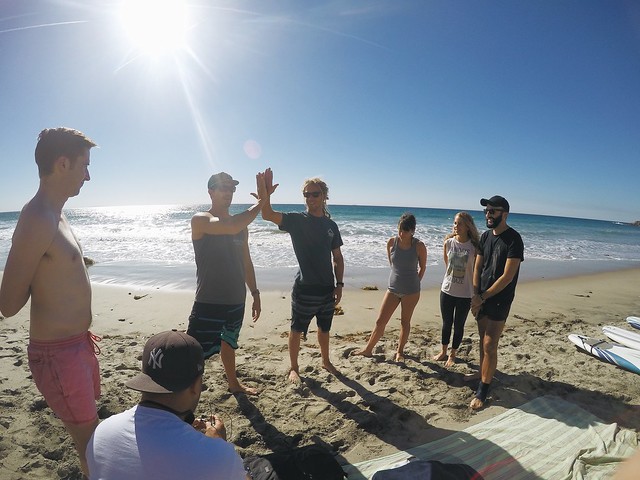 Even to a total newbie, surfing is a bucketload of fun. Most of the people in the group hadnt surfed before, so Quinn brought us through an on-ground (on-sand?) lesson on the theory of the thing, and told us that we’d probably forget it all once in the water anyway. Spoiler: we did.

The actual surfing lasted over an hour, by the end of which we were all wiped out. Update: half a year later, I still suck at surfing. Half a year later, I still enjoy it immensely. And what better ice breaker than watching each other wipe out in the face of a monster wave? I must tell you that literally nobody looks good wiping out. Everyone makes an incredibly hilarious and stupid face. The hope is that as you go on you wipe out less and less, and so the frequency of people seeing you look ridiculous is diminished manyfold.

Seven tan lines and a head of copiously salt-drenched hair later, I dried off with the rest of them and we drove to a spot in the mountains to have a picnic bench lunch. Happily chomping on my sandwich, I looked around and realised that I would literally never get to sit around and lunch with so many varied people from different cultures and backgrounds otherwise. Those of you who’ve been long term readers know that a big part of why I love Airbnb (and travel, in general) is the opportunity to meet and understand new people, mostly in the form of my live-in hosts. And with this new Airbnb Experience feature, it seems that group has expanded to other travellers who have similar interests – or at least, similar attitudes when facing new experiences that could potentially be very embarrassing. Ha! See above: re wiping out. 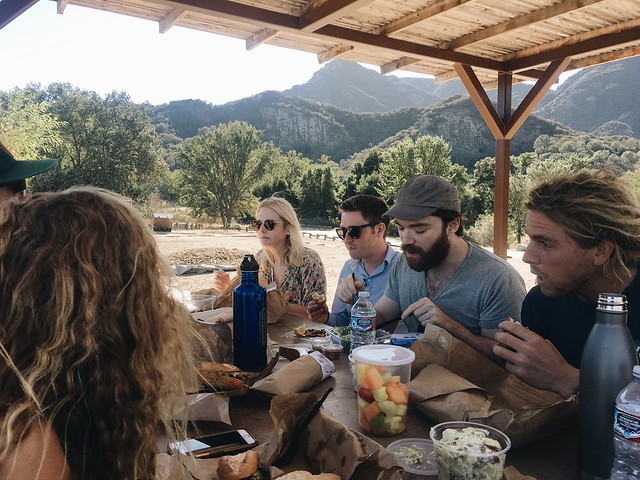 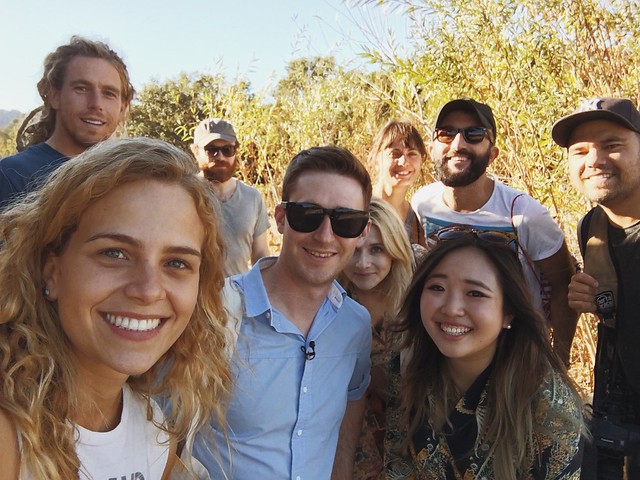 The second half of the Adventureman experience was hiking – something which I definitely did not realise beforehand. I actually hate hiking because I am terrified of falling down and breaking my face. In case you haven’t realised, I am extremely clumsy. But 2016 was all about pushing boundaries, and so despite fleetingly considering making a run for it, I chumped up and attempted the Malibu Creek State Park hike to the soundtrack of Quinn rattling off his favourite spots and memories from place to place.

Malibu Creek State Park is actually absurdly beautiful, and I found myself grateful that I’d been brought here because I don’t think I’d choose to go of my own volition. Lots of movies were filmed there – like Tarzan Escapes, Love me Tender, and Planet of the Apes. You can actually see the rock wall thats so heavily featured in Planet of the Apes, and the number of people taking selfies with it was actually pretty hilarious! Strangely enough, I never saw LA as much of a nature place – I knew they had a huge beach culture, of course, but my impression of LA had always been pop-culture based: griffith, DTLA, urban lights.. very curated, very specific. Never would I imagine going to LA, putting on some boots, and just going for a hike, though come to think of it, my American friends are very outdoorsy. Is this what being a local is like, then? In that hour long hike I saw everything I never had the option of doing. Back home, in the city grid and grind that I love and live off, the option to just get in a car and go frolic in some nature an hour out from the city was never really possible. Not that I’m complaining – different cities lead different lives. But experiencing the adventure man life for a day was pretty great, for a change. 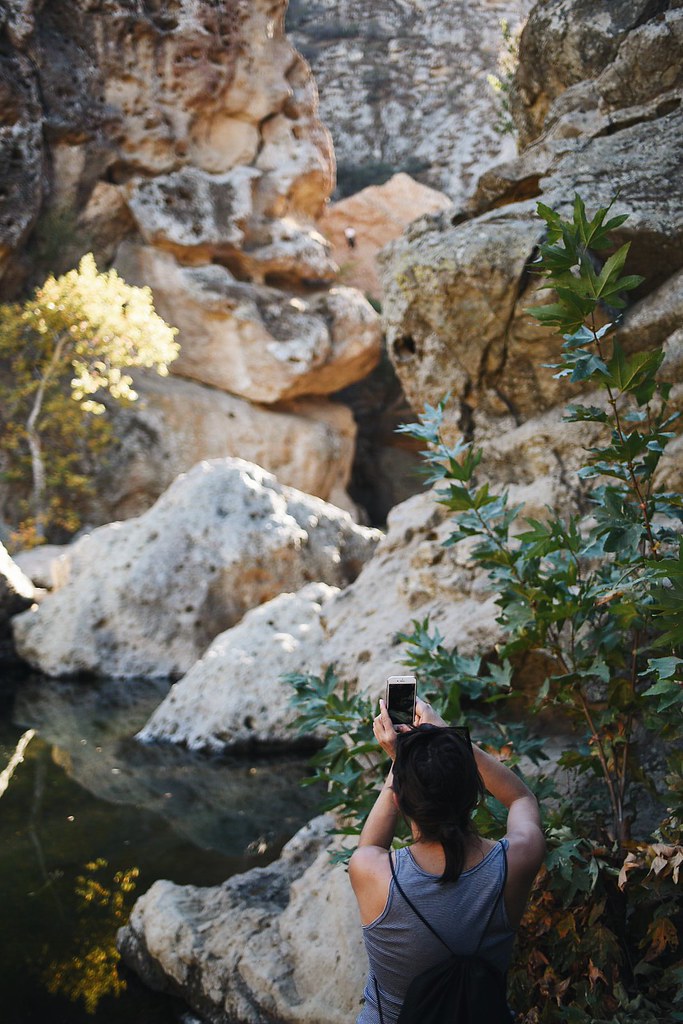 And that’s what Airbnb’s Experiences represented to me, I think. Going one step further and not just living in another person’s home, but experiencing life in their boots. I wrote a piece on a different Airbnb Experience last month, one with a south african author who uses the Experience feature as a vehicle on social commentary. That, to me, was something you’d never be able to do on your own, and something innately valuable to understanding the cultural and deep seated political issues embedded in a country’s history. This one is more straightforward, and doesn’t try to impart any moral lessons. But both do similar things in allowing you to live out the life of another person in a slightly being-john-malkovitch way. And both promise to be extremely unique and immensely enjoyable.

I speak from personal experience when I say that I hundred percent recommend The Adventureman to anyone headed the LA way. From what I understand, Experiences will be rolling out to cities all over the world soon too, so perhaps one day I’ll see you guys in a Hainanese Chicken Rice cooking class in Singapore? Who knows. But till then, surfs up. x

Airbnb Experiences is now available on the updated Airbnb app.