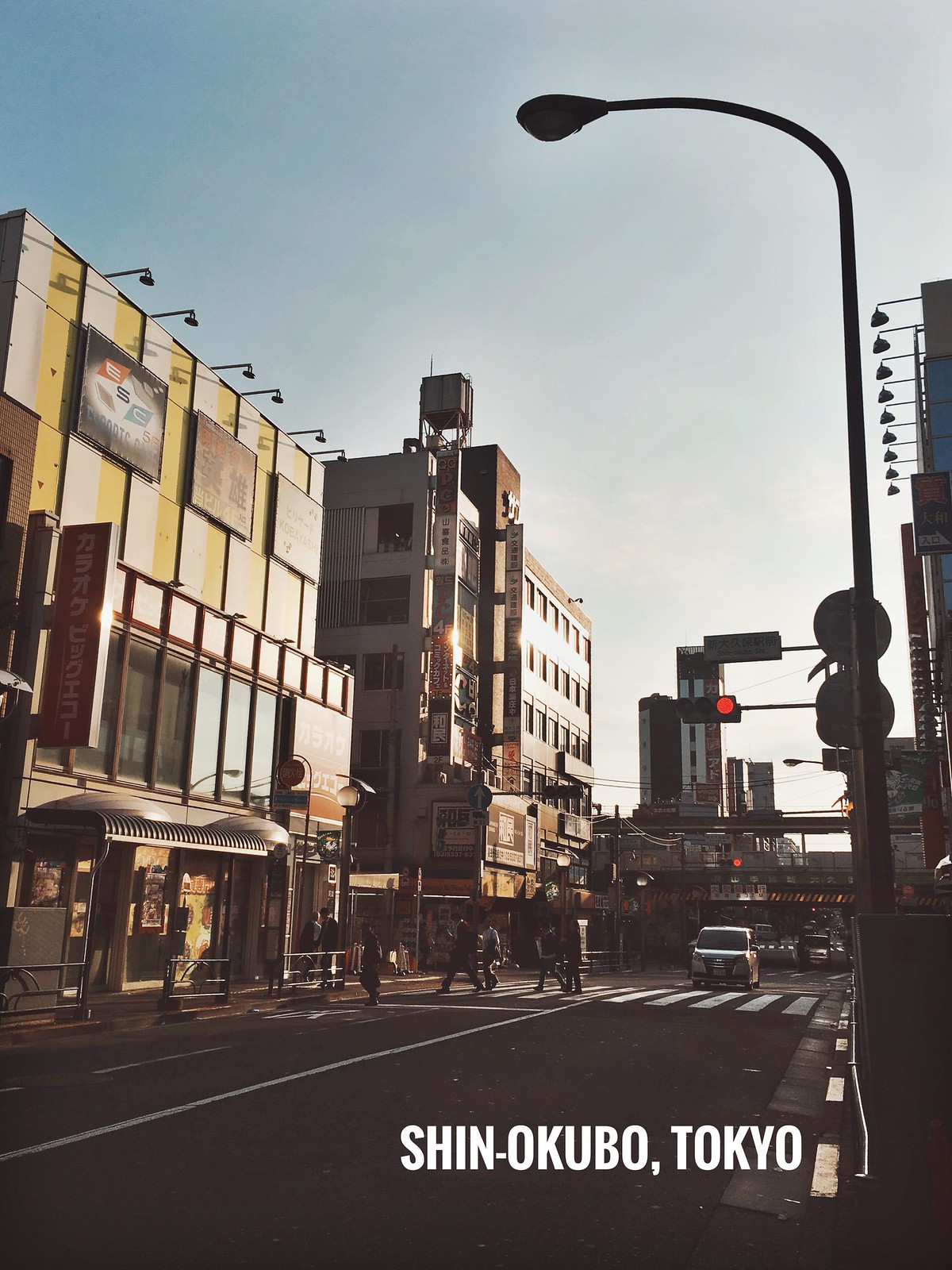 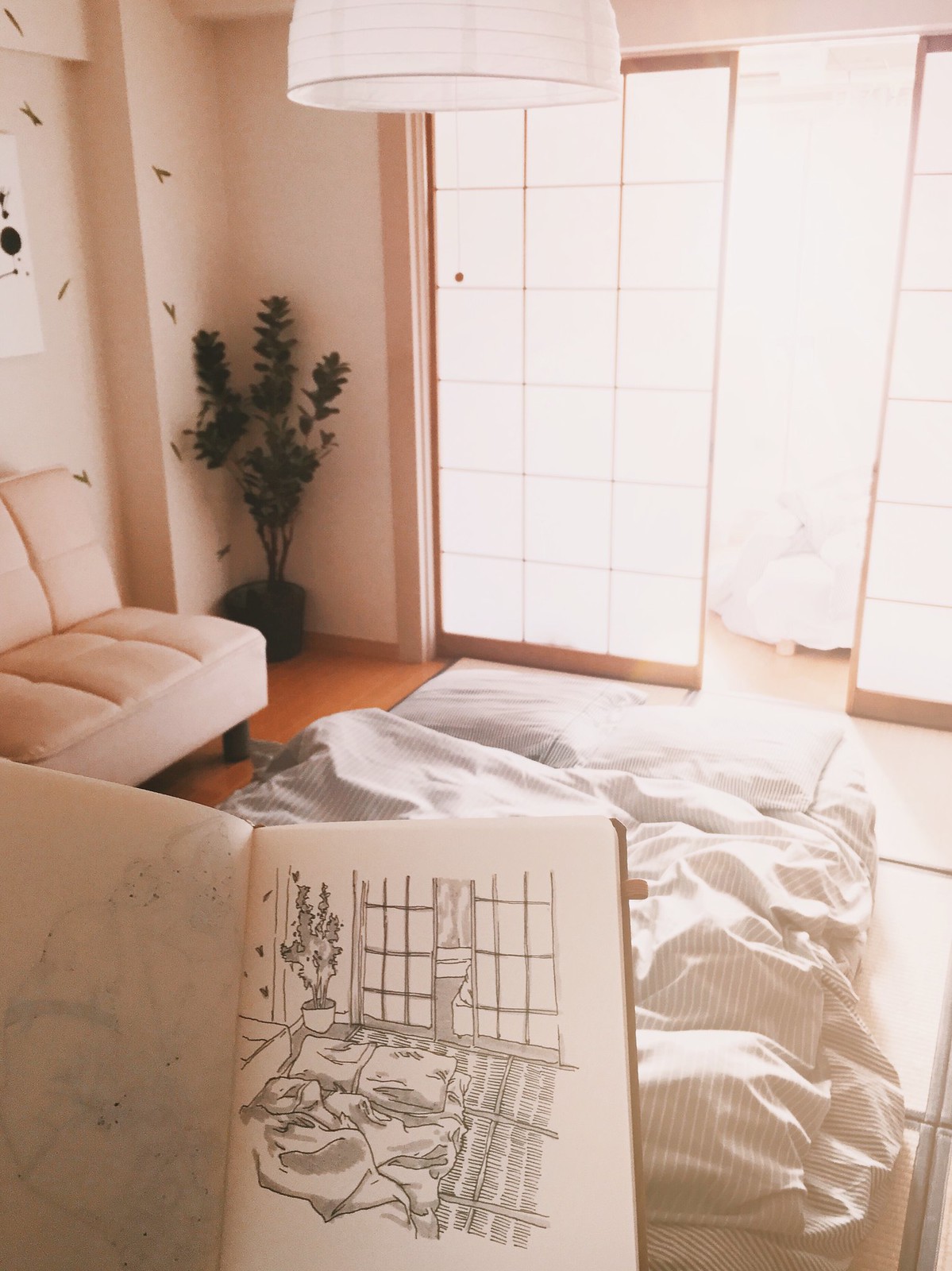 Tokyo, Japan
Another day, another beautiful Airbnb. We stayed in this gorgeous traditional meets modern apartment in Shin-Okubo, Tokyo, on our recent Japan trip. Shin-Okubo is better known as Koreatown in Tokyo, which is strange because anything korean related only spans one small street. That said, it is a wonderful area in Tokyo, not subject to the ridiculous crowds of Shinjuku or Shibuya, but accessible to everything all the same via either one stop on the jr line or a ten minute stroll.

Japanese apartments are known to be small, but efficient. Very rarely will you get a huge sprawling apartment with a lot of empty space like the type you might find in resorts or less land-locked cities. Tokyo is crowded, and so apartments stack, and they don’t waste any space. But japan is also home to some of the best and innovative designers (after all, it is the home of muji), and so apartments, though small, never feel cramped. 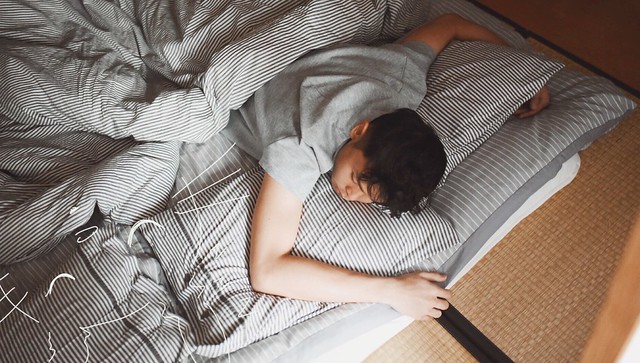 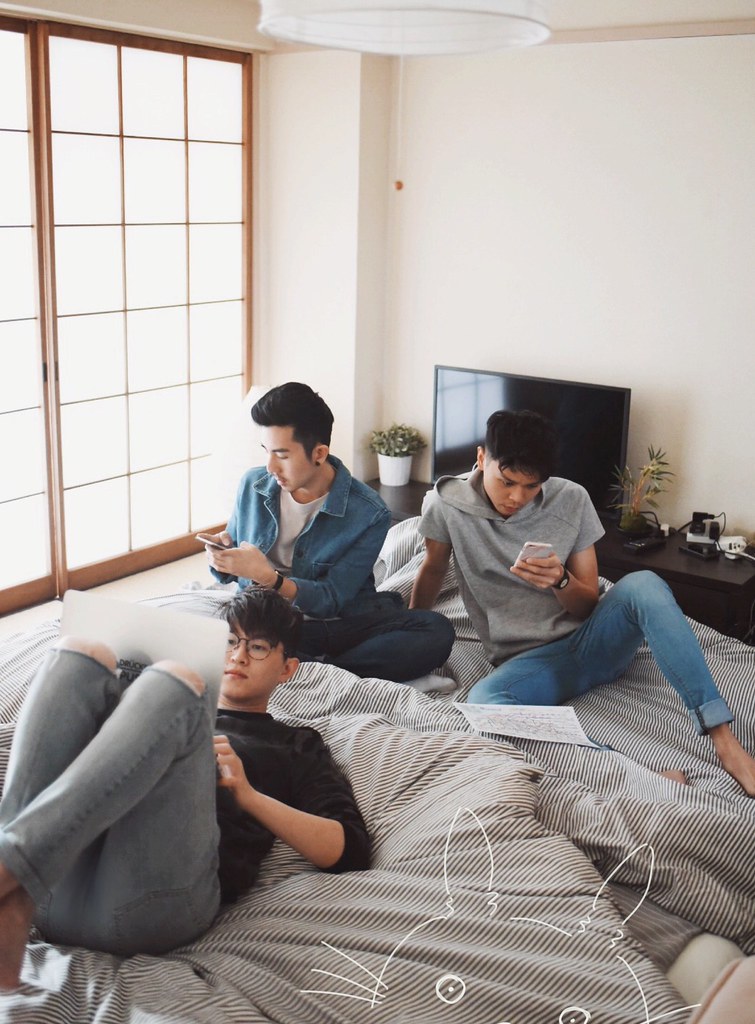 The boys on their futons
Part of this involves the fact that their beddings can be rolled away and kept at the start of the day, though of course lazybums like us leave them out and survive on them throughout the day. When I mentioned this to my sister, she said it sounded awful that we all had to sleep on the floor.

“Aha,” I said, “But it is a japanese floor. The most comfortable floor in the world.”
“Aah,” she replied, nodding wisely, not understanding anything I said.

It might not make sense to anyone who’s not had personal experience with the japanese tatami futons. But sleeping on the floor, in japan, is just as comfortable as sleeping on a bed, if not more. And in the winter, these futons can be plugged into a socket that makes it a heated blanket instead! How bout that. I dont know how they get out of bed to go to work at all, I imagine a heated blanket would be impossible to resist in the mornings. But then again, #japan.. 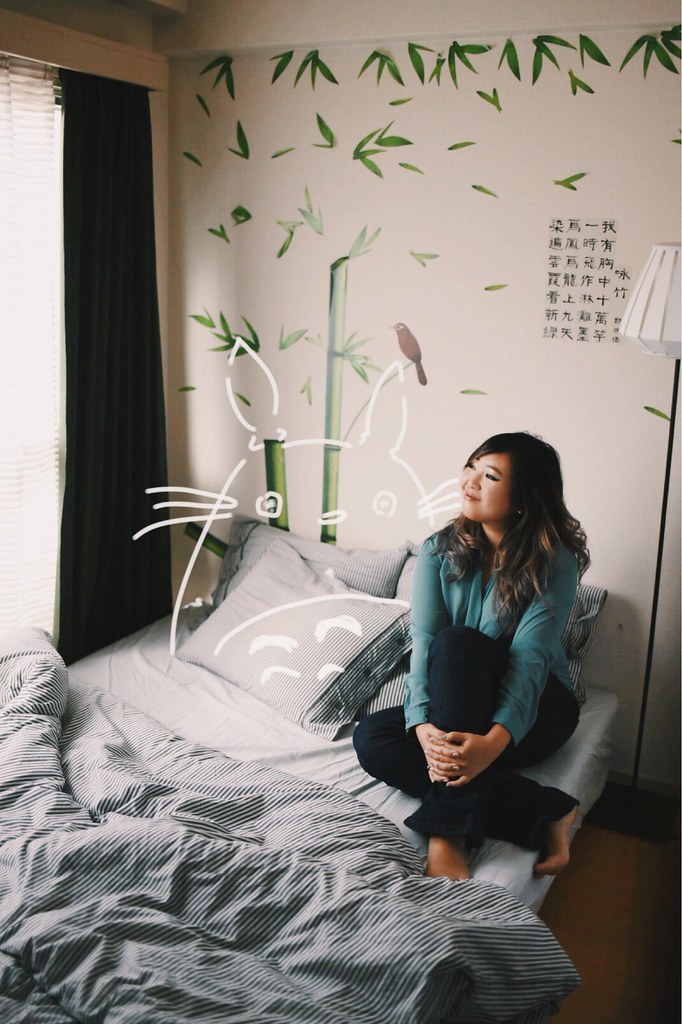 and me, teetering on the side of my mattress so i dont get my outside-clothes on the sheets
The rooms in the apartment were segregated by these sliding paper doors that are characteristic of japan. If you’ve ever watched a Ghibli film, you’ll know what I mean – those little sliding doors that make up both their cupboard and room doors. This means that they can be opened half way to open up the rooms to each other so everyone can chat across the apartment, or to let light in so sunlight floods the place without having to turn the lamps on in the darker parts of the place. 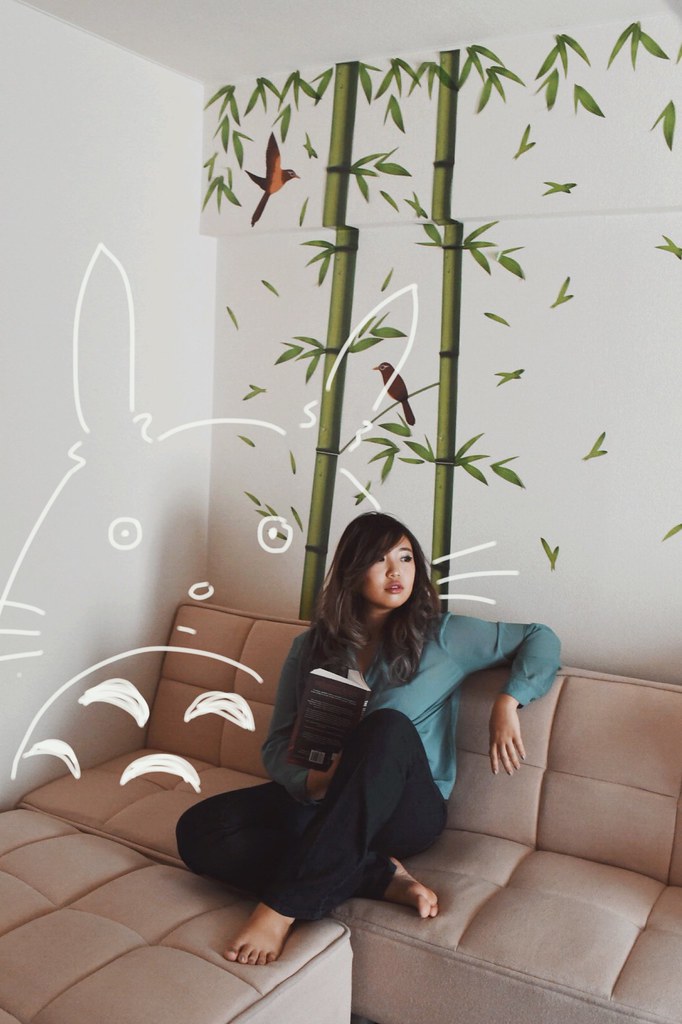 And reading on the sofa, which folded out to become yet another bed in case your travel party is larger than normal… who knew you could stuff so many people, hypothetically, into the same place? PS. Here I’m reading The Vegetarian by Han Kang, which is like Murakami on drugs – strange, weird, but interestingly, easier to come to terms with. Would recommend. 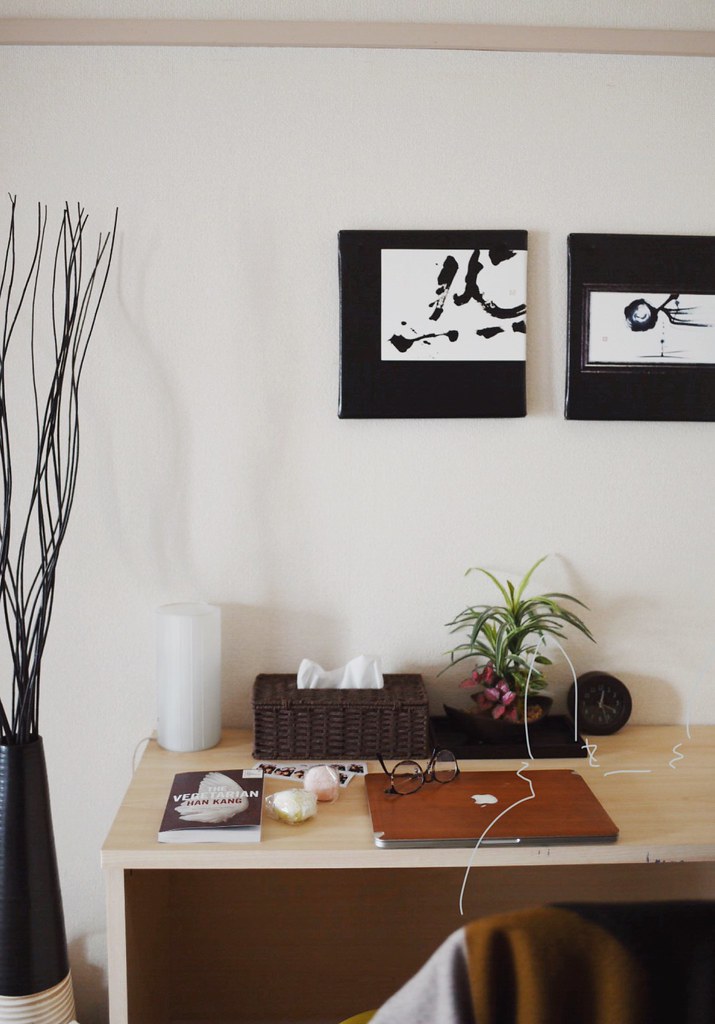 and a little work corner, if you need to get some writing done
As I’ve said many times before, it’s all about finding a balance between a great apartment and a fantastic location. Location is almost always the key, and that doesn’t mean getting a place thats necessarily in the middle of the city centre, but also places that have things to do and see around them, and so not just places that are smack right in the middle of a quiet residential neighbourhood. Luckily for us, this place had both. I consider Shin-Okubo pretty central, and there were a TON of things to do nearby. There was even a cafe right below our airbnb that I dropped by a couple of times to sit and work – it opens till 2am. 🙂

It seems my criteria for Airbnb listings has also informally extended to include proximity to convenience stores, adding on to the previous checklist of a easy walk from the train, the train station being an easy segue into the city centre, etcetera etcetera. Two minutes from our apartment we had one of Japan’s wonderful 7-11s (and so, breakfast for the trip settled everyday), and two minutes from that we had the Shin-Okubo train station. As I mentioned previously in last year’s Broke Student’s Guide to Tokyo, getting an airbnb on the JR Yamanote line is essential to any first timer in Tokyo because the day pass for the JRY gives you access to nearly all the hotspots you’d want to see. And while I’d been to Tokyo before, it was all the boys’ first times, and so the JR line rule still applied!

PS. Buying the JR Yamanote day pass is easy – just buy it off a machine. If youre not sure on how, then go approach the station master and tell him you want a JR Yamanote day pass. He’ll show you how to do it – the Japanese are really helpful! It’ll set you back about 750 yen for the day. Which sounds like a lot, until you realise that it costs about two bucks per train ride anyway.. so count how many places youre intending to see, before deciding if it makes sense to get a pass!

But one of the absolute best secret tips we got from our Airbnb host? Hitting this late night eatery hiding out on the second floor of an obscure building a street down from where we stayed. TORIKIZOKU, a traditional yakitori place that’s mad cheap and delicious – 280yen per item on the menu, including drinks!!! 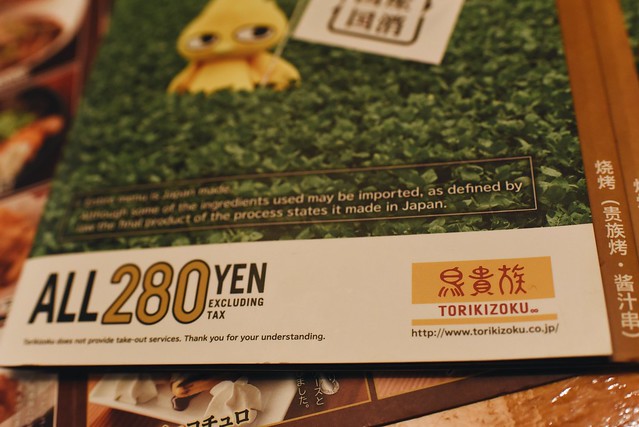 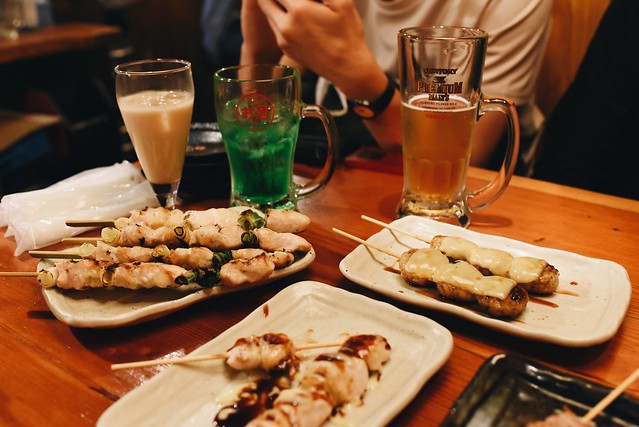 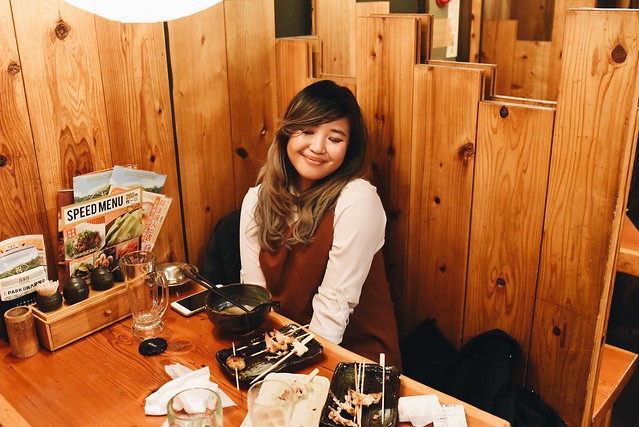 The stuff you only hear of if you get to know a local, hey? Even if you never get to meet your host (as in our case, a self-check in airbnb that was mediated primarily through messages on the Airbnb app), your airbnb listing will often come with an e-Guidebook which most people miss out on – it’s in your trip itinerary after your booking is confirmed 🙂 It usually consists checkin information, house rules, and places of interest around the area, and is created by your host, so you know what that means – LOCAL TIPS GALORE.

But honestly. Ho-nest-ly. Tokyo is so amazing that there will never be a time when I feel like I’m done talking about it. This is the fifth japanese airbnb I’ve stayed in (tokyo last year, then osaka and kyoto and osaka again), and you’d think that it gets repetitive after awhile. But you would be wrong. Each place I’ve stayed in brings its own flavour to my trip, and I’d like to think that they set the background to your experience in each new city, be it a traditional, uber-cosmopolitan, or uniquely modern apartment. And that’s part of the reason why I’ve always returned to airbnb time and time again, I suppose – even before I started working with them long term. Just a bit of side-talk: I get a lot of emails from you guys everytime I publish a new Airbnb post, and I’m always both surprised and grateful that people havent heard of it (probably because it’s such a big part of my travel plans) and also that people are willing to try. It really signals to me a sort of adventurousness that is new – we used to all be so safe in terms of our choices when we travelled, but if not now, when are we going to try and explore the world / new destinations on our own terms? It’s on that note that I’m thrilled to announce: I’m flying to LA tomorrow for a weekend, on agenda for Airbnb Open and to chat with them about what makes Airbnb, well, Airbnb. The future of travel. So stay tuned, because more on that real soon! x

Ten days in Tokyo: perfection. Miss you already, tokz. Till next time.

This Airbnb Listing
$33 off your first booking here