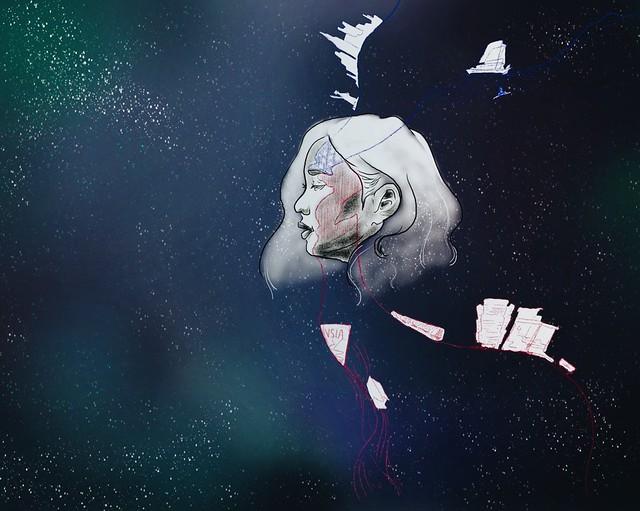 Illustration: Shane Lim for Her World
A version of this piece was published in Her World’s 2020 February issue for their Modern Love column. Many thanks to Hayley and team for housing it – you can get the issue in stores now. x

I write to you from across the seas. Between us there is everything: the North Atlantic Ocean, the Philippine Sea, the Laccadive, the Arabian.. my dreams, and my ambition.

From young this has defined me: pools and pools of ambition, that I have alternatively swam and struggled in. I was terrified of waking up one day to find that I had wasted my life: and so I threw myself into work, trying to write my way into a life I found meaningful. I was raised in the age of change, where Hollywood romances had started to peter off into slogans of female independence, critical essays questioning the status quo of a life lived prioritizing the couple over the individual. As a result, I saw a relationship as a likely death sentence to the pursuit of individual dreams, a lifetime of half-compromises. Where would I find a partner who would be okay with all the things that I wanted? And yet, six years ago when I met a boy on the eastbound train from NTU, I hoped.

The limit of Shane’s okay has stretched beyond the limits of my expectations. He has been by my side as I researched writing programs, been the first reader and editor for any story I write, the organizing principle to the chaos of my mind. He does this while maintaining a life, a career, an artistic practice that is separate from mine, from our relationship. In the past six years, my work as a travel host took me all over the world in short bursts, rehearsals in being apart, and yet he never once complained as I tried to figure out where my life was going. He was, and has been, more supportive than I could’ve ever dreamed. Still, when I called him one evening last year with news of my acceptance to Columbia, I was afraid. Surely this is it, I thought, surely now is when he goes, alright, I just want a girlfriend who is present, is that so much to ask?

Instead, he asked me to marry him. Two months before I flew, what I thought was a birthday celebration for a girlfriend* turned out to be an elaborate proposal, a six act theatrical experience based on a play he wrote. And then it dawned on me: this two-year long-distance relationship I imposed upon us both with my individual ambition was not something he secretly resented, nor something he was simply tolerating. It is something he is actively, wholeheartedly committing to.

And so we are engaged, promised to each other. But while a promise suggests future fulfillment, Shane has shown me that a relationship can have space in the present for both parties to grow into their own person, chasing their dreams while always having a home to return to in the other. This should be obvious but it is not always. This distance between us: it is also a promise towards reunion. And although we are physically apart, we know that our endgame is in each other.

Bio
Jemimah Wei is a writer based in New York City, pursuing her MFA in Fiction at Columbia University. Her partner, Shane Lim, depending on who you ask, is either a copywriter, a poet, an illustrator, a best friend to many, an incredibly supportive fiancé to one, or all of the above.

*the same girlfriend from my essay: To All the Girls I’ve Loved Before, published in Her World’s December 2018 issue.