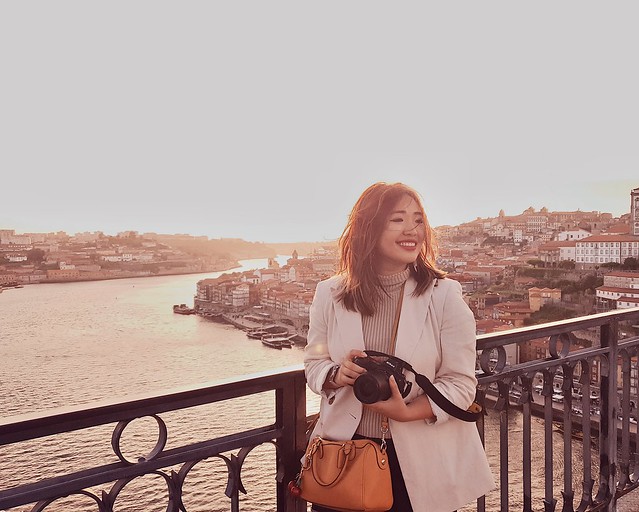 Porto, Portugal
Because we had taken a walking tour in Porto the city split in two. There was the Porto we had learnt about, culturally, historically, through the eyes of an enthusiastic and underpaid woman in a red polo shirt, shackled to the city by familial connections despite her advanced degree which could be traded for a better life just a little down the railway line. Then there was the Porto which was a series of beautiful encounters, enchanting meetcutes, the Porto that caught us off guard at each sharp turn with bent sunbeams and street music. Perhaps being with someone you love adds a sort of hazy filter to the world, a filter that wraps your surroundings around you, bestows upon you a half-belief that the circumstance you find yourself in was made specifically for you.

We were hand in hand in the Museu Romantico, within the Jardins do Palácio de Cristal, a place seeded and tended to with the sole purpose of embodying romance, each birdsong and wildflower echoing in the faces of the bodies strewn haphazardly across the grass, in some peaceful measure of sleep or dreaming. We were wondering about the woman we had spoken to the day before, the enthusiastic and underpaid one who’d made an appearance in sentence two of this post, and how she dropped her old salary as a teacher in a conversation as if it were nothing. How as she explained the cost of living in Porto it slowly took on the shape of nothing. How in the cracks of her voice we heard a bittersweet love for the tourism that had elevated Porto, decrepit city of her childhood, to a point of interest, attraction, to the outside world, and the accompanying way it revised her critical self analysis of her home. The tourism that created a revitalisation of the city center, a city center the locals refused to set foot in because it was too run down and too seedy, that now had restaurants playing jazz and fado by the waters at one point five times the regular prices. The tourism that lifted their property prices, up up up, so that once upon a time, when her mother had told her: don’t buy that building, eighty thousand euros worth of trash, she had listened, and it created not only the most haunting missed investment opportunity of her life. It had created also the story compressed into anecdote for the same tourists who now moan slightly as she tells them the story of how she chose to rent, not buy, and that building she once passed over for eighty thousand euros which is now worth what, two million euros. Stories, anecdotes, that her tourists lap up, which on some level, she also laps up, as a tour guide.

At the start of every tour gathered under the statue of Pedro the fourth (or Pedro the first, if you’re Brazilian) she does that little speech where she reminds them that this is a free walking tour and they get paid by no-one, not the city not the company not the government, but they subsist off the tips of the tourists who decide how much their work is worth. So the stories she tells are not just stories of her life, they are also the stories that get reinvested in her tour track, that contribute directly to the enjoyability of her tour, of her repertoire, and ultimately of her take-home. There is no villain here, only the cyclical movement of life and economics. There is no villain, only players – the people who come, the people who go, the people who cannot. The tourists, of course, another key figure in the game, the ones that we are not unaware we are part of. Hand in hand in the Museu Romantico this is what we are talking about, for a while.

While we converse other things roll in my mind. I cannot stop thinking about the girl who had the piercing on the left upper corner of her lip. Who told someone else in the group that she had come to Portugal spontaneously because the city she had been travelling to was too expensive so she had to find somewhere cheap. Who said this kind of loudly, within earshot of the guide, who’s smile never slipped, within earshot of the Brazillions in the group, whose economy is also in a pickle, within earshot of an Irish man, who later shook the guide’s hand very passionately, saying he understood exactly what she meant, being priced out of a market you grew up in. The girl who for two hours and fifteen minutes was really super loud, but whose voice evaporated in the last twenty minutes. Did you see where she went I asked the boyfriend, did she stay till the end. But he doesn’t remember and honestly, I cannot say for certain either.

I cannot stop thinking about one more thing. The bright and hard way the guide’s eyes doesnt leave ours as she takes our tip in her palm, never looking down at it, slipping it immediately into her jean pocket. I watch her later as she greets everyone else who gathers around her to thank her for the tour, pressing crinkly notes of various colours and denominations into her hand. Her eyes never dip past a person’s nose.

Porto for us was split in two. New sense of life past the visitor-friendly veneer will do that to a city, close two or three fingers around a tourist’s heart. Still, as we think about this, we cannot help but marvel at the view. How beautiful the city is. How mesmerising. How very, very charming.