#2018 | The Broke Student’s Guide to Intercity Transport in Portugal 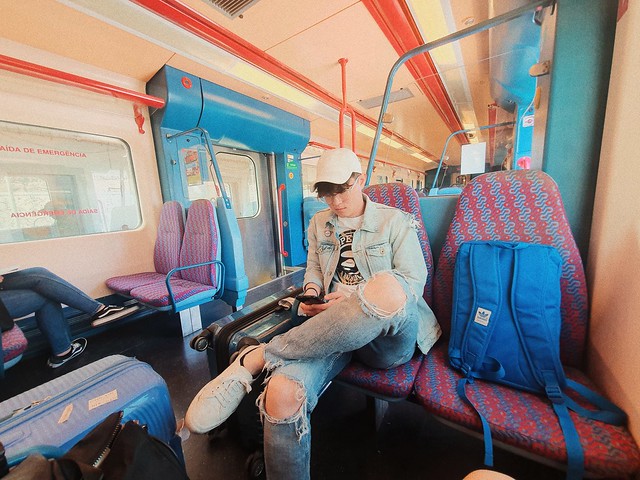 It’s me, back with yet another broke student’s guide inspired by my desire to move through Portugal on the cheap. I initially wanted to have this be part of an overall BSG for Lisbon, but the more I detailed the transport options the more I realised inter-city transport in Portugal really needed its own post. Yes, you can rent a car, but as with most of the world, manual cars are way cheaper to rent and us Singaporean noobs can only drive auto. Or is that just me? Anyway. Having to search for parking or ensure your hostel/airbnb/guesthouse offers free parking also seems like a bit of a pain, and although having the freedom to load up your bags and move in any direction is undeniably attractive, the car works out to be the more expensive option no matter how you look at it.

So we turned to looking at public transportation options, essentially: bus, train, and hitchhiking. I am a huge fan of organized hitchhiking as per my student days in Germany, but because people only list rides a couple of days before they want to go, it’s hard to do if you’ve got a fixed schedule. It was a lot easier when I was based in Germany and could just browse potential quick trips over the weekend, but coming long distance from Asia I wanted to have my accommodation all booked up beforehand so I ruled the option out this time. If you’re keen on exploring this option nonetheless, the website I use for hitchhiking / car sharing is blablacar.com.

IMPORTANT NOTICE BEFORE WE BEGIN 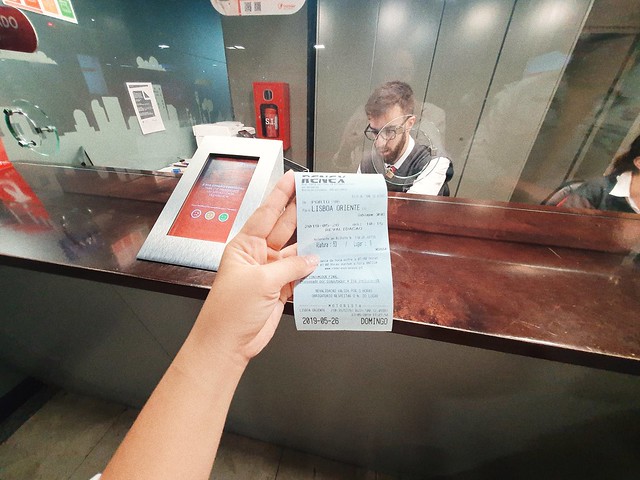 For some reason in Portugal, most bus or train tickets come printed on what looks like receipt paper, which feels like a recipe for disaster. For this reason I prefer opting for e-tickets if possible (an option if you take the bus), but it’s not always possible. So be careful to store them carefully – don’t accidentally throw them away because a conductor will come and check your ticket on the journey!

Ok now that the PSA is out of the way: 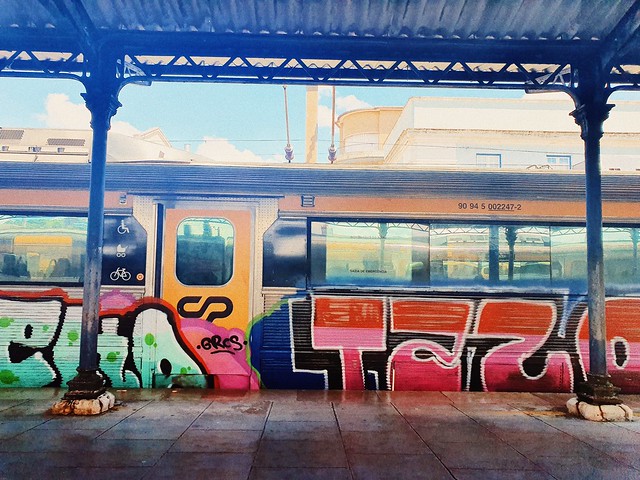 Taking the train is the most common tourist way to get around Portugal as it’s what we’re generally most familiar with/ believe to be the most reliable. There is a pretty extensive train network in Portugal, but if you’re planning Portugal as a stop in a multi-destination European expedition, please note that the Portuguese train system is almost completely isolated from the other European lines, with only one or two trains to Spain or something like that. So if you’re hoping to book a weeklong rail pass in europe and move around, it wont apply to the Portuguese leg of your trip.

So, Portuguese trains. Their intercity trains service the bigger cities like Lisbon and Porto, but to get to the smaller towns like Batalha, you’d need to take a bus. The trains are run by their state railway company CP – Comboios de Portugal – and you can check for tickets and schedules below.

Things to note: EN option on the top right
Select Train Times instead of Buy Tickets to see full train schedule
Not all the trains can be pre-booked. This is where it got a little confusing for me when I was researching/planning my trip, so I’m going to try my best to break it down. There are 4 different kinds of trains you can take:

Most Expensive – Alfa Pendular (AP) and InterCity (IC) long distance trains. These are available to buy online, and require a seat reservation. You must print these tickets, or have them sent via SMS to your phone if you are able to register your phone with the website.

You should buy these in advance as they have major discounts up to 65% the earlier you get them, but do note the train schedules only come out 60 days before travel date so if you’re planning way in advance just keep that in mind. ALWAYS buy the tickets on the official CP.pt website as third-party agencies like EuRail or Rail Europe cannot issue seat reservations, and you’ll have to pay extra for them at the station anyway.

The AP/IC trains have a lot of different discounts that can be applied if the terms and conditions are right. For example: If you’re traveling between Tues to Thurs in a group of 3/4, the AP trains have bulk deals of 40/50% off your tickets. If you’re booking a long distance return trip of over 91km, you get 10% off. If you can prove that you are 25 or below, you get 25% off your train ticket prices. Etcetera. As there were only two of us and we are no longer young (FML), very few of these incentives applied to us.

But I personally find that because the above deals cannot be stacked (discounts dont apply in conjunction with other discounts, even if you qualify for more than one), the R/U trains are still cheaper most of the time.

Least Expensive – Regional and Urbano trains. These have no option to pre-book, and they don’t require a seat reservation, so buy tickets at the station when you arrive. They are often significantly cheaper than the AP/IC trains, but because you cannot purchase them online, if you run a search using the Buy Tickets instead of Train Times option on the website, they wont show up, and you might end up accidentally buying the more expensive AP/IC ones instead.

Sample schedule for trains between Coimbra and Aveiro
As you can see, only the AP/IC trains have the option to purchase on the far right. And even though there’s an early bird promo for one of the IC trains, it’s still 2 Eur more expensive than the cheapest R train. It doesn’t sound like a lot but it adds up, especially if you’re going to hit a few Portuguese cities on your trip!

We didn’t take a single AP/IC train on the trip because 1. they were significantly more expensive and 2. the places we wanted to go to were all serviced by either buses or the R/U trains. I think the only reason why someone on a budget would pay for the AP/IC trains would be if they were super anxious about having everything booked beforehand – I’ll admit, I was a bit confuzzled by the fact that we couldnt get the R/U trains online (no forums or websites seem to mention why) and I was nervous about not being able to get tickets on the day itself. But we ended up winging it and it was fine.

Interestingly! Our Portuguese friends strongly recommended the buses, saying that they rarely took the trains unless absolutely necessary. There are a few bus companies, the most extensive (and therefore, tourist-friendly) one being Rede Expressos which has over 200 express buses zipping between cities multiple times a day. It also seems to have absorbed its main competitors, RENEX and Eva, so I suppose this would be the closest they have to a national bus service.

It’s not a perfect booking experience – The website can be a bit finnicky, especially on desktop. Even though I used the English version of the website, I had some issues getting the locations to show up – Porto, for example, kept showing up as PORT, which was initially very confusing, and Lisbon’s Oriente station shows up as LISBON EAST. But I eventually circumvented this by downloading and using the myRNE mobile app, which I found much easier to navigate. It’s super convenient too, because then you can just present the mobile ticket on the app rather than looking for a printer to get the actual ticket printed.

If you have a Portuguese address and phone number (basically, if you have a Portuguese friend), you can sign up for the free Rflex membership which gives you discounts on your bus ride. I think we saved about 2 euros per ride, which adds up! Otherwise, if you’re 29 and under, you qualify for a youth ticket, which gives you a small discount as well, though not as good as with the Rflex card.

You can book tickets on the bus up to 30 days prior, and if you’ve accidentally booked the wrong time or have a change of plans, you can swap your tickets once for free at the station. They’re also very good with customer service – I had some questions about my ticket before getting to Portugal and didn’t want to place a long distance call, so I DM-ed them on Twitter and they replied within the hour. 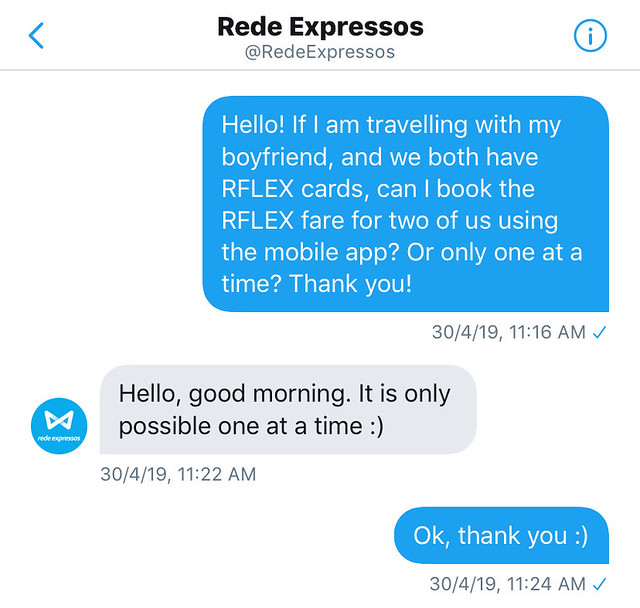 Twitter: @RedeExpressos
The buses were actually great. The seats were mega comfortable, and they were fitted with power sockets and wifi. We were super impressed by how comfy the buses were! You can also store your luggages in the bus, and although they technically have a 20kg limit, I didn’t see any bus drivers checking for weight.

The only things I would take note of during the booking process would be the station names and locations – they don’t always depart from central bus terminals, and in bigger cities they might have more than one departure point. In Batalha, for example, the Rede Expressos bus departed from this tiny bus stop in a small road, which had no signage for the bus company whatsoever, although the address matched what our tickets said. We basically sat there and hoped for the best. It all worked out in the end though! 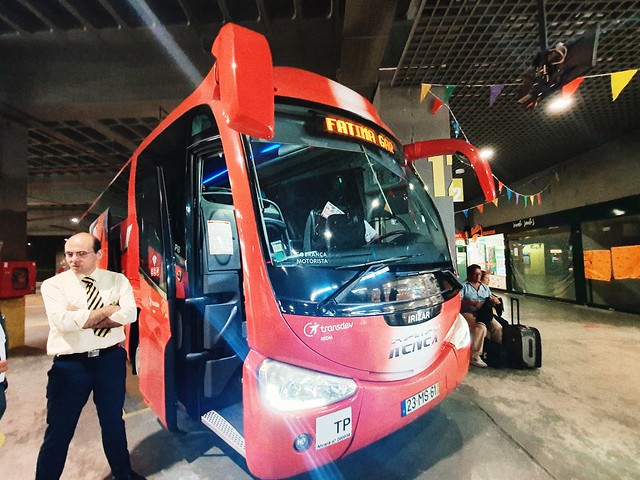 Which option you go with depends on what you prioritize. For me, it was cost – so I ran searches for both the buses and the trains between each city we wanted to visit, and went with whichever worked out cheaper for that leg. As a result, we did a mix of bus and trains on our trip – small villages like Batalha were only accessible by bus, and on occasion, the bus worked out significantly cheaper (14Eur for Porto to Lisbon, vs about 25-30Eur on the train). But because the buses have a minimum fare of 6 Eur, we swapped to taking the trains for some legs, like Coimbra to Aveiro (5,30Eur) and Aveiro to Porto (3,50Eur). It’s a little bit more troublesome, and requires a touch of faith that your trains will indeed have space for you even without an advance reservation, but this is the Broke Student’s Guide, not the Everything Is Easy guide – and in that spirit, I say to you: yolo.