The last time I blogged about couchsurfing in Salzburg, I got a lot of feedback from you guys concerned with safety issues, or relating horror stories you’ve heard from friends.. but I really do believe that everyone should try it at least once, and if not when you’re young, then when? So I’ve taken into account your emails, my own experience, and things I’ve heard from talking to other couchsurfers to compile this post on what couchsurfing is about, what to expect, and how to maximize your chances of having a good CS experience.

Couchsurfing is an online community that allows people to host other travelers for free based on goodwill. Despite the name, I’ve never had to actually sleep on a couch before – most of my couchhosts had extra rooms or beds, for which I’m grateful. What it is not is a free hostel – which means it’s not somewhere you just turn up at to sleep and then run off doing your own thing. Your host is not obliged to give you food and clean up for you (though most are really happy to have a meal together), and it’s a community based network where you make new friends and exchange stories and experiences from your own culture. Noone’s going to deny that a free bed is its main draw, but more than that, it’s a fantastic way to make friends with people from all over the world and understand more about other cultures.

Do I need to pay to get my account verified?

I know the CS website says it ups your reliability and likelihood of getting a host, but I didn’t get a verified membership account and i’ve been surfing fine. It’s really up to you though. I feel like it’s more important to put thought into your profile so that when you send people couch requests they know you’re a legitimate person and not some creep.

Do I have to host to surf?

No, but it’s good to have some experience in both hosting and surfing I guess. As students though, the likelihood that you’ll have space to host someone isn’t very high, and I suppose most people understand that..

So I really don’t have to pay?

Nope, but I always make it a habit to buy my host a round of drinks or cook him/her a meal.

How does it work?

You decide where you want to go, then start looking for a host in that country early. I find that with different cultures your search period differs too – with London, hosts appreciated knowing early if you’re coming but with Italy, my hosts were all super chill bros and were like please! Ask me again in two months! I cannot plan my life so far in the future just yet! It’s cute.

When someone replies you, confirm it early and then remind them again closer to the date so they don’t forget you’re coming. It helps to arrange a place and time to meet because most of them have jobs or may not be at home when you land in the country, etc etc. Also, some hosts are cool with giving you keys but for most of them you’ll have to work around their schedules – it’s never been a major issue though.

I can understand where the concern is coming from, but yolo, am i right. Lots of getting to know a new city or country comes from understanding and hanging out with the locals, and CS is a ready made pool of locals waiting to befriend you! Still, there are things you should look out for in a potential host..

1. Check their reviews.
Always go for someone with reviews – the more the better. I almost never send requests to people with even one negative review, and if they have no reviews at all or seem even vaguely dodgy.. forget it.

2. Read between the lines.
The thing with Couchsurfing is, when you leave someone a review, that review shows up on your profile. Ie. Under your own profile it will display the exact review you wrote for another person, be they good or bad. Lots of couch surfers won’t want an association with a bad review to show up on their profile because reviews can’t be deleted (makes sense, or else everyone will just delete all the bad comments to make themselves look good), or out of fear that someone will leave them a bad one in return and hurt their credibility.

Which is why I say, read between the lines. Couchsurfers can be very sneaky and extremely politically correct. For example, “This person was pretty busy and worked late everyday so i didn’t get to spend time with him, but he seemed really nice” might mean “It was difficult to contact him and this made getting back to the apartment hard sometimes.” “He has a couple of other roommates, which was a surprise” might mean “He didn’t tell us we would be staying with a whole bunch of people we don’t know.” “He didn’t speak much english, but he was really helpful” might mean “WE CAN’T EVEN COMMUNICATE DESPITE THE FACT THAT HE INDICATED INTERMEDIATE PROFICIENCY IN ENGLISH ON HIS PROFILE.” Like i said, read the reviews carefully to pick out anything you might take contention with.

3. Talk to them properly before showing up
Send them a message. Get a vibe from them before deciding on whether or not to stay with them. If you talk to them a few times before actually going to the country, you’ll get a rough idea of how easy it is to communicate with them and if you’re going to be comfortable sleeping in this person’s home.

What if I don’t want to surf, but I dont mind meeting new people?

I totally get that. You want to make friends with strangers without the commitment of actually having to stay with them if things go south? No problem. Couchsurfing is full of forums where people arrange meetings/ outings/ meals with one another. Generally they meet up in a big group monthly, so it’s not a one on one thing. You can always join one of those and just show up and hang out, and leave anytime if you decide that you’re not comfortable. 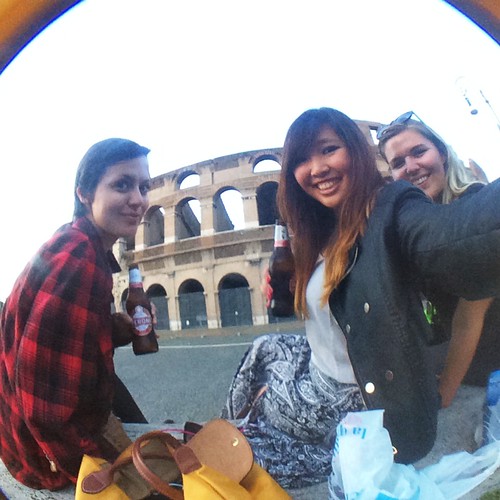 Hanging out with other couchsurfers in Rome
Have you ever had any bad experiences on couchsurfing?
Thankfully, most of my couchsurfing experiences were positive. The thing about being a girl is, though, that if you’re traveling alone your couch requests will get accepted very easily, but you need to filter out the creeps. One guy pulled out on me LAST MINUTE once he realized that I would be coming with my boyfriend, even though I’d specified two people in my request (maybe he thought I was coming with another girl or something). Another guy messaged me incessantly even though I said I wouldn’t be free to host him and eventually asked me to be his girlfriend two months later without even meeting me once. I once had a host who was completely uncontactable and nearly left me stranded with my luggage all alone in the middle of the night in a train station. He turned up one and a half hours later.

On the other hand, from what I hear, it’s considerably harder for a guy’s couchrequest to be accepted, but they have to deal with less creeps. It’s a trade off, I guess. What I’m saying is, it’s not some sort of idyllic dream where you run off to stay with a super nice host who ends up being your best friend and long distance pen pal or something. There are weirdos. There are weirdos all over the internet. But when it works out, it works out well, and there are really great experiences to be gleaned with every new thing you try. Just be discerning, and have common sense when trying it out!

Alright, that’s all I have for now. I hope I’ve answered your questions adequately, and if you have any more questions drop me an ask or comment in the box below. If you have any couchsurfing experiences, good or bad, feel free to share as well!