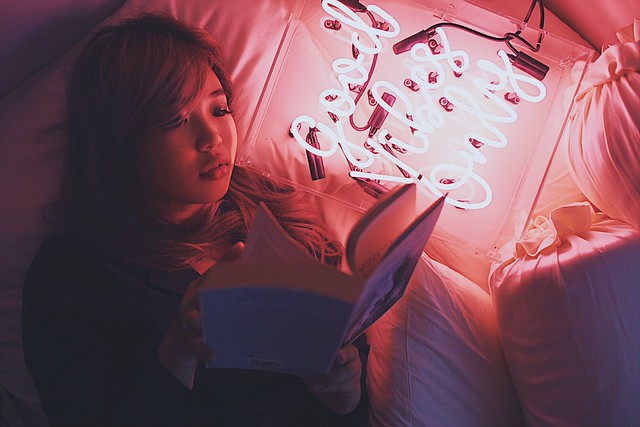 Attack the ropes, people, the exact words I’m hearing as I pen this blogpost. Here I am sitting at 2:22am at my dining table, in front of the new pot plant my mum bought, in between items on my to-do list. There’s the new Netflix original, GLOW, playing in the background. So far it’s pretty good, and I do want to watch it, but at this point in my life, the only way I can justify watching new television is really by doubling up the time by also doing other stuff, like my makeup, skincare, hair masks, and light work, the kind that you do when you’re really tired.

Right now at the top of my agenda is the acknowledgements page. The thank you speech, the grand bow out that only my supervisor and two other people will read, the thing that is small but seems significant regardless. I wrote: What a journey, and then stopped. There seem to be no words. You would think that after a two year wrestle with ideas and words there would be no lack of them to pad out the end, but you would think wrong.

Again, it is 2:22am. Actually, now it’s 2:28. I’m thinking of all the things I want to do with my life and also thinking of my submission and also thinking of sleep. I’m still awake because I spent the last two hours vegetating and only realised that I was zoning out because my cat jumped up and sat on my lap. I was thinking of shoelaces, the one thing that realises and seems determined to publicly prove that I’m still half kid and not nearly ready to be an adult. I prefer zips because they are straightforward. Also on my mind was a certain night in LA where I discovered anew the joys of supermarket peanut butter. I did a hair mask tonight also, so I guess I was not completely useless.

I miss reading, but I’ve been a bit too tired to read lately. This is not a complaint, it’s just a kind of.. realisation. There is a point where you get so tired you brain stutters, and you can feel it constantly doing double takes. At that point words kind of glaze over. I read Hunger a couple of weeks ago and followed the news that surrounded it quite closely. Im still in the middle of the new Joyce Carol Oates book that is a monster of a book, mad long, heavy as a brick, and beautiful but also occasionally gratuitous. I guess thats kind of why I’ve been watching more TV, it just seems more forgiving right now. I finished season two of the Flash which is now on Netflix and i felt like Grant Gustin and I were meant to be, also, streamed Okja, and had mixed feelings about it. Its possibly because I have been studying the arc and technicalities of scriptwriting recently that I find myself mega critical of everything I see onscreen, but then I also wrestle with the knowledge that the director was trying to do something good. How far do good intentions go to cover up a messy script? I mean, it worked with Wonder Woman. I don’t have an answer, I was just throwing a question out into the great blue.

Alright. It’s 2:41 now. That’s nineteen minutes of rambling you just read. Actually less, I got distracted in the middle and watched a bit of the GLOW episode playing, and then went to get some water, and pet my cat, etcetera. Time to sleep. It’s funny because today I said I would turn in early.