I caught Phantom of the Opera at Her Majesty’s Theatre on my last night in London. I can’t imagine myself ever being in London and not catching Phantom – as a twelve year chorister, I grew up with it, it’s my favourite musical, and London makes the arts so accessible. I mean, dollar for dollar, being able to catch an international classic at twenty pounds? No wonder creatives and creativity both breed like rabbits on heat. But I digress.

I’m a bit of a mess when it comes to Phantom – I sob violently the minute the curtain rises all the way till the last note is sung, and I obsess over the little details in the musical. This time round I found myself getting slightly angry at the orchestra for their liberal interpretation of the score and how their pacing stifled the swell of the music (I was so annoyed at this that I just had to say it although I know this is just rambling for anyone who hasn’t grown up in the performing arts), but all the same I suffered from intense musical hangover after the show and cried all the way back to our apartment. Actually – I cried all the way home to Singapore, with the soundtrack on repeat the entire plane journey home, giving a few air stewardesses quite a bad scare. I did say the musical put me in a mess..

Anyway. The point of this post is, upon returning to Singapore I was overcome with the urge to rematch the musical again and again, and started searching tour dates online, which is when I realised that there is a sequel to Phantom of the Opera. I cannot believe I never realised this before, given how much I love the musical, but okay. It opened 2010 on West End, and closed to largely negative reviews, before being reworked and opening in Australia for a short run. The name of the sequel is Love never Dies.

Obviously, I had to watch it.

Unfortunately, it was showing nowhere in the world mostly because everyone hated it, but they did have it filmed during their Melbourne run and released in blu-ray on youtube, with Ben Lewis and Anna O’Byrne playing Phantom and Christine respectively. The musical is set ten years after the events of Phantom concluded, where Mdm Giry and Meg (“Christine, Christine – where in the world have you been hiding?”) have smuggled the presumed dead Phantom to Coney Island, America. He runs a freak show carnival/ theme park, with Meg playing the onstage lead belting gaudy showtunes and kicking up in short skirts, trying to gain the Phantom’s approval while he secretly pines away for Christine. Man, that girl can not catch a break.

On the other hand, Christine is now married to a very grumpy Raoul, who has apparently spent all his money on gambling and drugs (really?). Their kid is ten, except it’s not their kid, it’s Christine and Phantom’s secret love child (really?). Apparently, they had one steamy night together before Christine got married, and Phantom pulled a disappearing act the morning after because he feared rejection. This, obviously, led Christine to assume he was dead (again, really?). The musical picks up where the world-famous soprano Christine arrives in America from Paris to sing at a gig, under invite by an unnamed theater owner. No prizes for guessing who.

In many ways, the musical is a bit of a disaster. First things first, it gives no regard to continuity or logic. Secondly, it reads more like a musical piece of fan fiction from an Phangirl who rooted for Phantom and Christine to end up together after POTO. Thirdly, in terms of musicality, the arrangement is a bit queer – the musical opens with it’s best song (“Till I hear you sing once more”), which is basically setting itself up for disaster. Also, although LND is musically proficient, it is lyrically a bit of a disaster compared to POTO. Lastly, and possibly the most fatal problem LND faces, the characters dont feel like the same characters anymore. I get that it’s been ten years and they’ve changed, but they’ve changed so much that a lot of their original qualities have been rubbed away. I mean, Raoul as a violent grumpy drunk? Really? Also, the musical ends with Christine dying. Because Meg shot her. Really?!

But despite the technical failure of the musical, I found myself loving it. The score isn’t on the same level of musical proficiency as POTO’s score – I dont believe any other musical comes close to Phantom musically – but it has an enduringly haunting effect nonetheless. I sat in my bedroom and cried, listening to the soundtrack, and then I watched the filmed musical and cried some more. There’s a lot to love for the LND soundtrack if you consider it independent of the original Phantom score, and many of the songs work in Phantom chords to create a sense of musical, if not logical, continuity in the show. The Love never Dies soundtrack is available on Spotify here:

If you’re not watching the musical, I suggest reading the lyrics when listening to the soundtrack.

In terms of storyline, I read a zillion reviews online for LND hating on the musical. There are even fan pages against the musical called Love Should Die and Paint Never Dries, which is both hilarious and sad. I get that Phantom purists feel that the sequel somehow taints the original, and I agree with most of the points raised – I was upset that the Phantom’s original dangerous quality which gave him this unhinged edge was rubbed away and he became a moony lovesick man in the sequel. I didn’t like that Raoul became a drunk – that was a cheap shot, to me, a kind of easy way out. But the things I liked about the sequel I liked a lot.

For example, lets talk about Meg. I love that the sequel delves deeper into Meg’s psyche, which matches up so nicely with the fact that the last act of the original POTO closes with Meg discovering the mask and turning to face the audience. 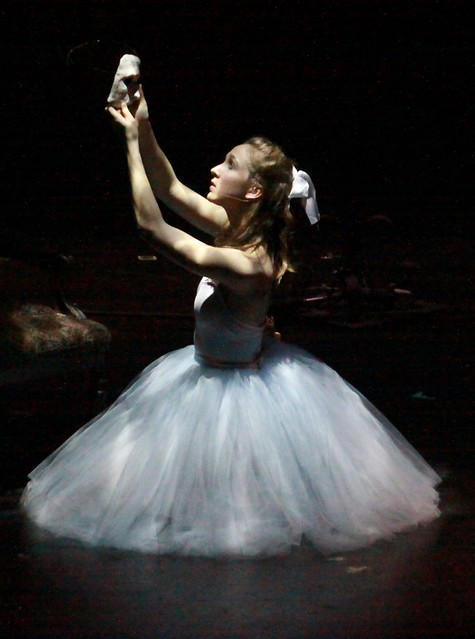 Meg discovering the mask at the end of POTO

Instead of just being a supporting showgirl in the Phantom canon, she turns into a complex character with a lot of believable motivation that carries over from the original POTO. She craves the same care and tutelage the Phantom gave Christine ten years ago – makes sense, since in POTO she was bugging Christine about her new teacher. She finally headlines her own show, only to have Christine show up and overshadow her with a new aria penned by the Phantom – and the way the older Meg was written really brings out the struggle between wanting the best for her old friend and feeling the resentment that one feels when something you’ve worked so hard for comes so easily to another. I mean, damn, they made Meg human. You really feel for her in the sequel.

And although I hate that Raoul became a drunk – again, a cheap shot, because stamping him with the label useless gambling drunk immediately signals to the audience that he is not the one you should be rooting for instead of trusting the audience to be intelligent enough to choose as with in the original musical – I can totally get behind the reason why his marriage is falling apart. In one of his solos (“Why does she love me?”), he details the reason for their eventual growing apart – he can’t give her the rush that music brings, he knows she yearns it, and he couldnt deal with that so he responded in bitterness. The exact line used: even as she sings/ and soars above me/ i try to clip her wings. Which is a shitty way to behave, but again, it is human. People can be little shits about their insecurities, and it echoes the couple’s exchange in the original musical (“Notes/ Twisted every way”) where Christine insists the Phantom will always be singing songs in her head and Raoul replies that unless they kill him he will haunt them until they are dead.

I’ve always been a Phangirl (can’t believe I’m using that term), because I strongly believe that at the core of every performer burns a desire for that which makes them tick – dance, music, theatre, etcetera.. which is why despite the Phantom being an obvious psychopath, I’d always felt like Christine should have gone with him because no one else can give her the music she needs, and I use the word needs because it is the fuel that makes her, who is in essence a performer, tick. This is why dancers date dancers and composers date sopranos. It’s all very Gone Girl. Cue Amy: What other girl has killed for you? You’ll never be able to go back to a normal, boring relationship, Nick Dunne. Our love is like the world’s sweetest cancer – it can go into remission, but it’ll never go away. Ten years later, Raoul links Christine’s music to her relationship with the Phantom and this insecurity causes him to act out bitterly, ergo, their marriage is failing. I see it; I believe it.

But what’s the point of this post? I guess at the end of the day what it is for me is this. A topic I’ve always hotly debated with all my friends post-musical is the If you were… one, ie. if you were Christine, would you choose Raoul or the Phantom? Interestingly most answers are unexpected. The people I expected to empathise with Phantom chose Raoul, and plenty of people who value stability above all else chose the Phantom. Which is to say that at the very least, it’s an interesting topic that carries the musical on to immortality, by keeping it alive in thought and conversation. But the question is answered by Andrew Lloyd Weber in his sequel, which to some extent, stunts the audience’s imagination. Despite the fact that I enjoyed the musical sequel, and that I enjoyed the soundtrack.. at the end of the day, should it have been made? I don’t know.

Regardless, if you’re a Phantom fan, then I think you’ll have to watch it to find out, even if you already know you’re going to hate it, just like how we ran straight into the trainwreck that was the later instalments of The Princess Diaries while knowing they sucked.. just to know everything that there is to know from what the canon contained.

The full musical is available on youtube, here’s part one:

After all, even if you do hate it.. it’s the kind of musical people either love, or love to hate. Either way, it guarantees a strong reaction, mostly of the teary variety.

All that typing has made me want to catch the original Phantom of the Opera onstage again. Ah well.

And to everyone else: yes, we return to regular, non ranty posts next week.