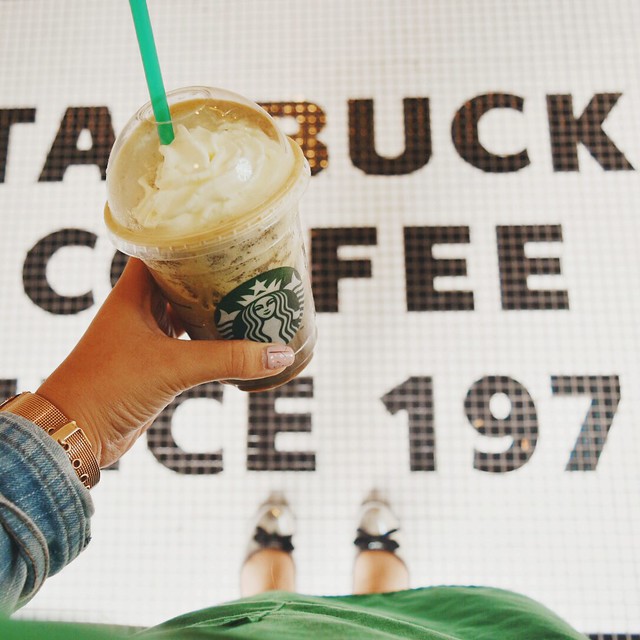 Ladies and gentlemen of the jury, I would like to announce that of April 2015, I have made it in life. I have made it in life because I have my own starbucks drink named sorta after me and that, of course, is one of the indicators that you have achieved the proverbial it. Along with having a castle and a pony and one of those useless glittery chandeliers.

It’s a funny story: remember the joke post I wrote awhile back – The Ultimate Starbucks Marketing Plan where I detailed the masterplan behind Starbucks’ global domination and monopoly of all future uses of the word viral marketing campaign? Remember how later on they emailed me saying We saw your post, and it’s cool, but a little hard to implement…? And remember how I ended up being invited down by the local Starbucks PR team to visit the Most Beautiful Starbucks in Singapore as featured in one of my previous Mocha Mondays posts?

Well, a while after that, Starbucks asked me out for coffee again, vaguely excited about something they refused to even hint at. I sat down with Steph, their PR girl, and she leaned across the table and said in a low, thrilled hum: Remember how you talked about that Ariana?

And the rest, as they say, is history. 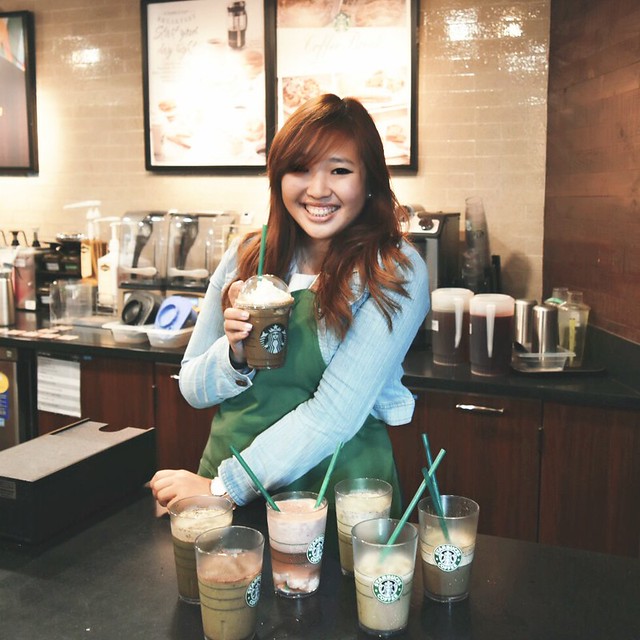 The Jemma for Starbucks drink is a collaboration for this year’s Starbucks Summer campaign, but it can be ordered anytime as long as you know how to do it. I went back down to the Most Beautiful Starbucks in the World to try my hand at creating a frap – and in my head, I had this fantastic idea where I’d be shaking a bunch of ingredients together looking cool doing so (in my fantasy I could roll the silver shaker up and down my arm: in retrospect I might have been thinking of a martini shaker..) while everyone else looked on impressed. And when I took my first sip there would be a moment of white, dazzling, clarity, and I would know that this Ariana was the one.

I don’t think there could possibly have been a worse barista than me in the history of ever. I think it was apparent almost immediately that I had no flair for drink creation whatsoever. The first drink I made was met with tentative sips and furtively exchanged glances. There was no Aha! moment.

”What dyou think? I asked, tentatively.
Everyone else exchanged glances.
”It’s… interesting.”

And everyone knows interesting is just code for you suck, so I pressed on. I must have wasted two cows full of non-fat dairy that day – so many half-abandoned carcasses of almost-arianas. It was nearly three full hours later that I stopped, feeling defeated, with something resembling an Ariana. It was a triple tea concoction with blended java and an espresso shot poured in affrogato-style. It sounded very fancy and hipster and I think that’s where the similarity to Ariana ended. Still, it was something. It was kind of tasty.

”I think we might have it.” I ventured bravely.
Everyone else nodded. ”We’ll ring it up. Congratulations – you made your Ariana!”

And that might have been it, if not for the fact that a couple of days after, I received a call from Starbucks.

“We’re so sorry..” they said, “but some of the stores cant do it because of ingredient complications. We’re going to have to try again at creating a drink. We’re terribly sorry. Do you mind?”

But I didn’t mind. It was a chance at redemption! Hope flooded me anew. Ariana v2 – another shot at the elusive Aha moment!

Such and such and that was how I found myself at a quiet Starbucks tucked away in a corner of Tampines one Saturday morning at eight. This time I was prepared. Previously I assumed an automatic connection, love at first sight, all that jazz. This time I did research. I armed myself with literature on flavours that worked and didn’t work. Flavours that complemented each other. I must have studied the Starbucks secret menu three times over for inspiration and ideas. I was ready.

And that, kids, is living proof that you can study your way into anything. University, jobs, or Starbucks. The first drink we made was a raspberry flavoured concoction that was slightly sweet and mostly confusing. The second attempt we thought about the sensations of comfort. Mornings in my dorm in Germany, waking up to the smell of chai brewing on the stove as my neighbours made their own chai tea from scratch. I opened my eyes: I like chai. Too bad it’s a tea.

The head barista, Haidar, regarded me thoughtfully. Yes – but it can be a frap.

We all exchanged a look. Could it be? I dared not hope.

Quietly, we pumped some chai in a cup (less sweet), with soy milk (wouldn’t Ariana drink her coffee with soy?), and blended some Java chips in (she does have a little edge, doesn’t she?). It shook away cheerfully in the blender. Haidar took it off the machine and poured it out. We all stuck straws in it and took a sip.

My baby! I’ve never felt more like a proud parent, ever. It was undeniable – this was the one. We experimented with a couple of variations, full milk, an espresso shot, etc etc, but we tended back to the original always – you know, when you know, you just know. If it sounds cheesy that’s because it is. We had found our Ariana. 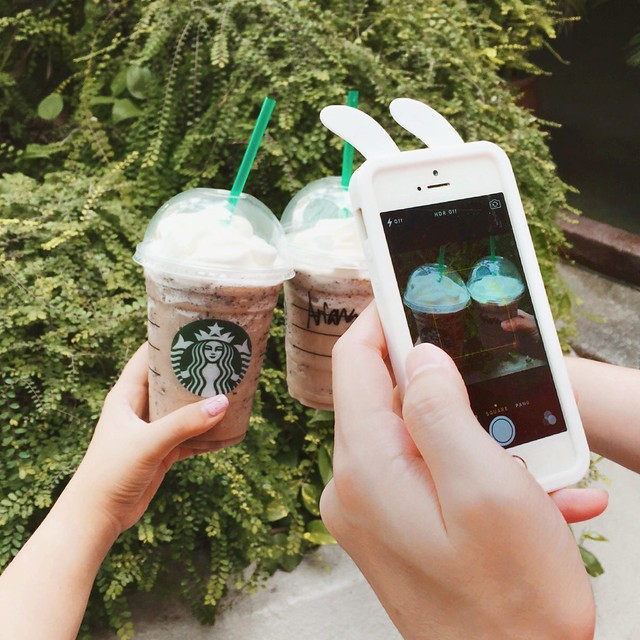 If you’ve been following me on instagram you’ll already know that it’s been implemented all over Singapore as a kind of wink wink insiders only secret club drink – flash my instagram picture over any Starbucks counter and have them make it for you. The response has been incredible – people have been tagging me on twitter, instagram, everywhere – and I adore how everyone seems to love it, it’s been incredibly overwhelming and a little bit surreal, to be completely honest. I still cant believe it sometimes. And I’m so grateful to the entire team for giving me this opportunity and holding my hand through the whole thing! 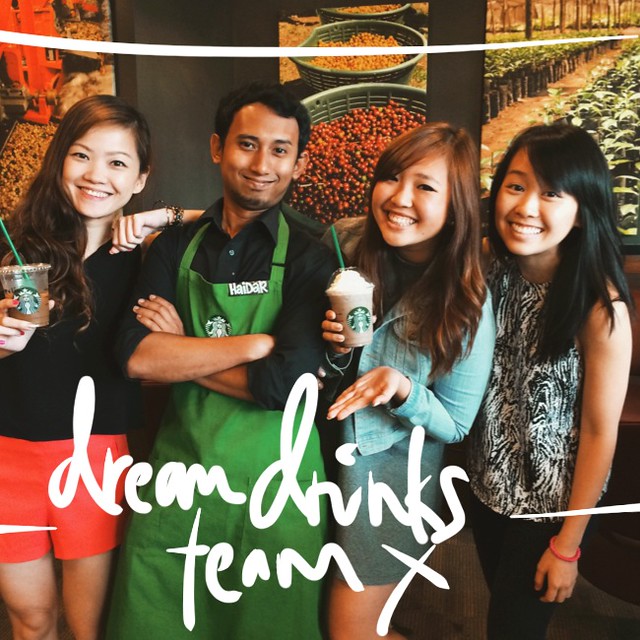 Missing Steph, who couldn’t make it down for our retry

So even though that’s the official name – Jemma’s The Ariana – it really is only called that because Jemma, The Starbucks PR team, and Haidar the Tampines West Starbucks Barista’s The Ariana is a bit too much of a mouthful. It was what it was because of the entire team – everyone was consistently giving suggestions and candid feedback, and honestly, no one knows a Starbucks drink better than a Starbucks barista – it just wouldn’t have been possible without Haidar’s input. Consequently I refer to it as My Dream Drinks Team’s Ariana in my head, even though it’s officially called Jemma’s The Ariana. 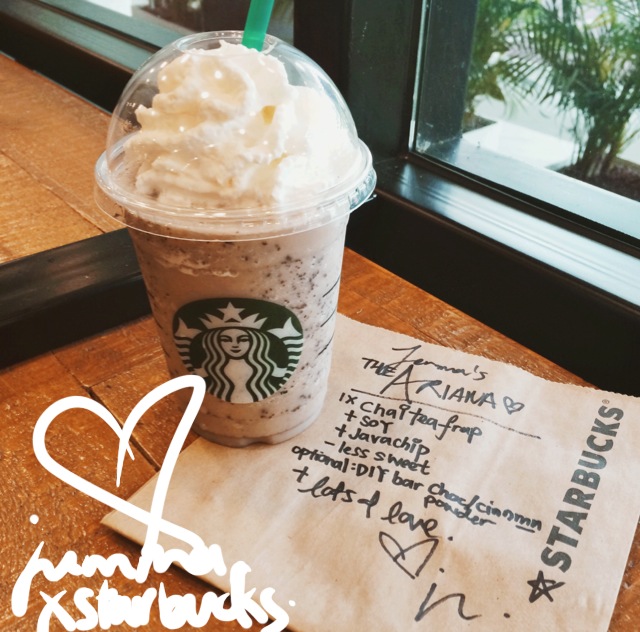 Here’s the proper ordering convention if you want to have a go at the Ariana – 1 x chai tea frap, + soy milk, + java chip, – less sweet. The idea was to use existing ingredients in a completely new way so people everywhere could try it forever as opposed to if you bring in new and seasonal ingredients, and in any case, Starbucks fraps are customisable so you can actually personalise your Ariana even more or make a completely new drink on your own!

I put this out on instagram awhile back, and have been consistently instagramming my Arianas and encouraging others to do the same ever since – surely flooding everyone’s feed, because finally Edwin commented in one of my whatsapp chats:

“Wah Jem you got your own Starbucks drink ah. Made it in life leh.”

As I stared at the message on my phone a slow grin crept up on me, a eureka sort of realisation, which brings us back to the beginning of this post: I have made it in life. Even without that pony I always wanted. I held on to this thought as I turned to the boyfriend and announced: Baby, I’ve made it! He stared at me placatingly and said Sure you have, bunny, and I settled back down, content.

Thank you, Starbucks. Thank you, ladies and gentlemen. I can now retire in peace. 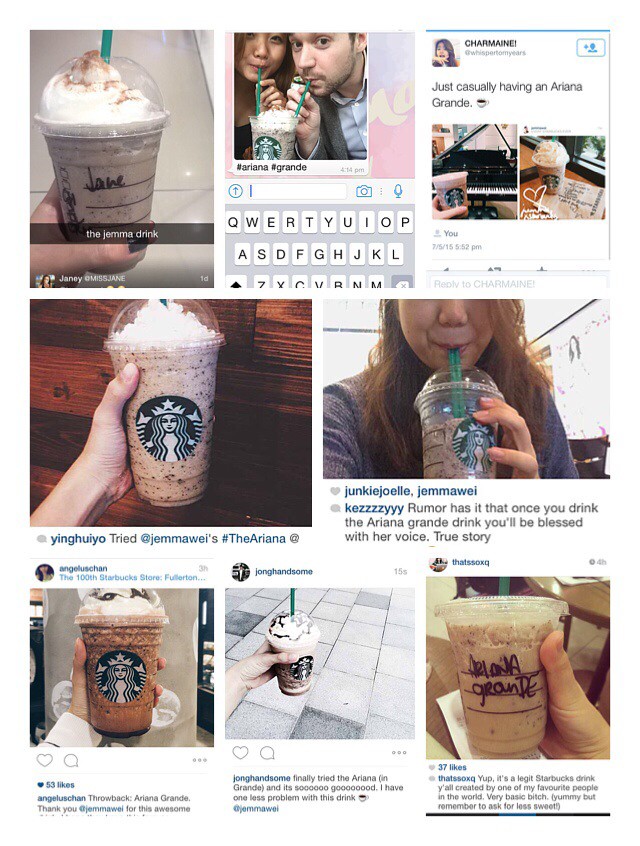 Nota Bene: If this post was melodramatic and exaggerated it was only in good humor – I REGRET NOTHING. Mocha Mondays will return to its regular cafe features in the following weeks.