#1897| This Week in Honest Reviews: Everything with Fries

In light of The Accident, which is how I’m referring to the nightmare that was the whole of this week, I have been able to get exactly nothing done. Subsequently I’ve been reaching to past events to blog about – which lands us where we are today. THIS WEEK IN HONEST REVIEWS: Everything with Fries.

The boyfriend had an inexplicable craving for sour cream fries, and he also had the key deciding element in all decision making (ie. The Car), so we ended up at Everything With Fries, Holland Village one afternoon in November.

I don’t know how it is I’ve frequented Holland V for years and never realized they had an EWF till now. I don’t normally crave flavored fries – when I do, I hit the EWF by Everything With Fries in Orchard Central, Somerset, where you can get a drink, burger, and flavored fries all for the low, low price of ten dollars. It’s the more affordable offshoot of the original franchise, the Marc by Marc Jacobs of food, if you will. I’ve also been to the Everything with Fries in Bugis Junction but the only thing I ever order from there is the King Salmon, which is mouthwatering. This time I told myself I’d try something different. I googled the Holland V EWF on the way there and landed on Brad’s review of the place, which listed recommendations like the One Egg Soup ($3.90) and the Grilled Ham and Cheese Sandwich ($8.90). 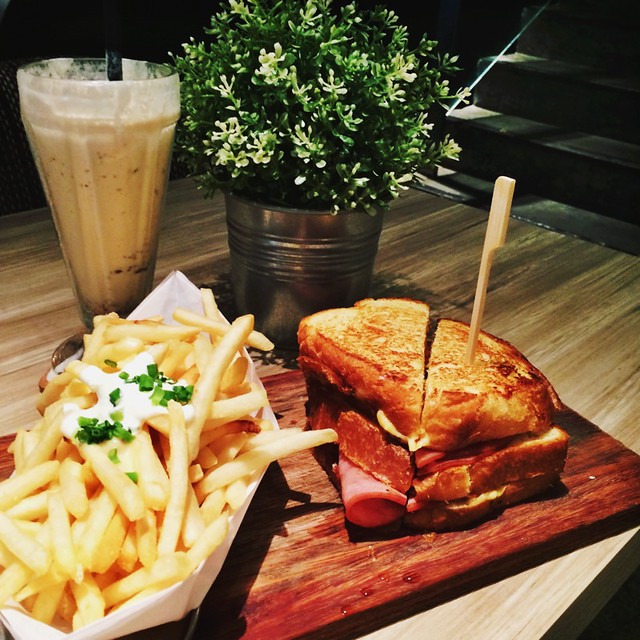 Let me start by saying, man, Inflation. The Egg soup was about 9 bucks now – sorry, not paying nine bucks for what is essentially one egg – and the ham and cheese sandwich was fifteen bucks before GST.

I should clarify also that we were there primarily for the sour cream fries, which we

The second point honestly perplexed me. What I mean is this – each main comes with a type of fry. Sour Cream, Sea Salt, Curry, whatever. The strange thing is this: they pair up the main with the fry flavor they think is best, and you can’t choose your own flavor of fries. Meaning if you want a burger, you have to get it with curry fries. You can’t get a burger and then decide you want sea salt fries. If you want sea salt fries, you have to get.. whatever sea salt fries are paired with. I know, right? I don’t get it either. We asked them a bunch of times and they kept telling us we really couldn’t change our fry-flavor. So we ended up buying the Ham and Cheese sandwich for the sour cream fries, and then a Burger set because we wanted a burger and not a sandwich.

To that point: the grilled Ham and Cheese sandwich was pretty good, but it was basically a high class grilled ham and cheese sandwich from Bread Talk. You know the one. It even looks the same, except this one is freshly done and doesn’t cost two dollars. It was just an extremely confusing consumer experience, because it was good, don’t get me wrong, but it was also fifteen dollars. 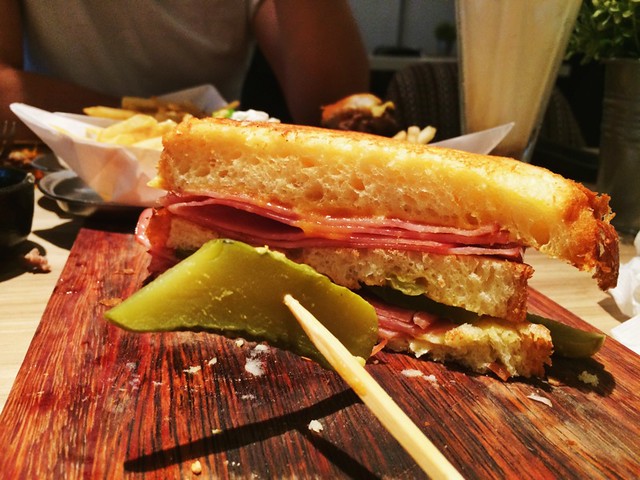 Also, does anyone actually like pickles? Can we all agree that nobody likes pickles already? Why does every single fast food joint put pickles in their stuff? Macdonalds, I’m looking at you.

The butterscotch shake was divine, and truth be told, desserts and shakes are what EWF are known for if I’m not wrong. It seemed obscene to go there and not get either, but I’m not a sweets person so I just snitched a bit off Shane’s shake. It also cost eight bucks, which is the price of a meal (if you get wings or something like that).

New Food Rule: if your drink costs the same price as your meal it almost certainly has equal or twice the amount of calories your meal does.

Seriously, write it down. This has been tried and tested. It was a really good shake though, with crunchy bits in it. I suspect they actually blended a whole slice of cake into it.

Back to the mains – I think the burger we had was called a Cheese burger, I’m not sure. Nonetheless, it had cheese, beef, and bacon in it. It was really good. I had a bite of it and it ruined the Ham and Cheese sandwich for me, which was a bit of a pity, really. The beef was, yknw, beef, not the integrated patty nonsense other burger joints use. Again, Macdonalds, I’m looking at you. (I actually like macs, but for some reason that isn’t coming out in this post.)

We also shared a bucket of skinny wings between us from the appetizers section – which was equal parts crust and meat. I don’t know what sort of marinate they used but it was delicious, and the skin was extremely crumbly which I take as a good thing. On hindsight, the wings could have been a main if you’re a girl, the portion is pretty decent – and it was probably the reason we couldn’t finish the rest of our food. That, and over ordering.

The bill came up to about sixty dollars, give or take. To be completely honest, the food was decent, but I don’t know if it’s decent like forty dollars more than the EWF by Everything with fries decent, especially since you’re basically getting the same thing – meat in between slabs of bread and fries. I feel like I should have stuck to the King Salmon, which I’ve had about thrice before, each time being a wholly wonderful experience. That said – the staff were nice, the decor was nice, and the ambience was nice. You decide for yourself if that type of nice is worth forty dollars in your books.

PS. Thank you for all your well wishes regarding The Accident guys, I’ve read all your emails and askfms, even if I havent actually got round to replying them yet. x