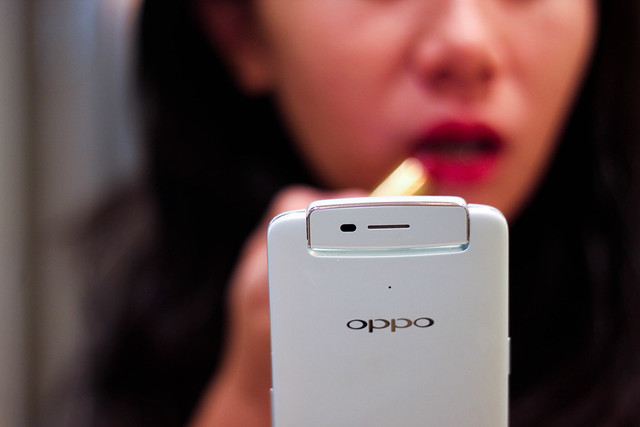 When I announced that I was headed to Korea a month back, Oppo Singapore sent me their N1 Mini for “all my instagram needs”, otherwise dubbed The Ultimate Selfie Smartphone. But I don’t even take selfies, I protested, and I could see it in their eyes Of course you don’t. You’re using an iphone. Well.

On first sight it struck me as very much a girl’s phone, given it’s gorgeous baby blue shade and selfie centered design, but the more I used it the more the other functions of the phone appealed to me. I should put it out there now that I wasn’t paid to write this post and it’s completely non-obligatory, but I genuinely want to review the phone because I really liked it over the month that I had it and I think it definitely should be up for consideration with girls everywhere. So Oppo in Korea – an unbiased everyday girl’s review – here we go: 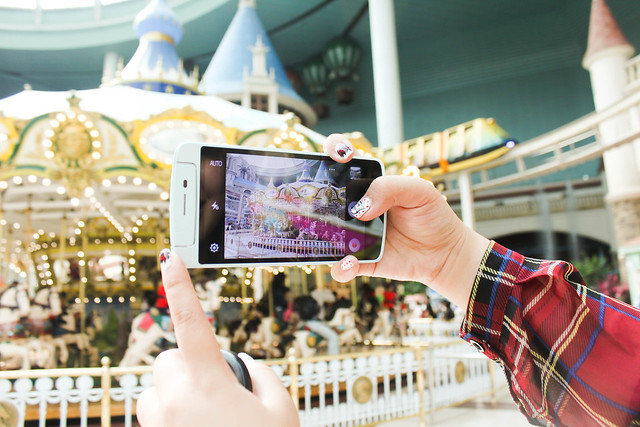 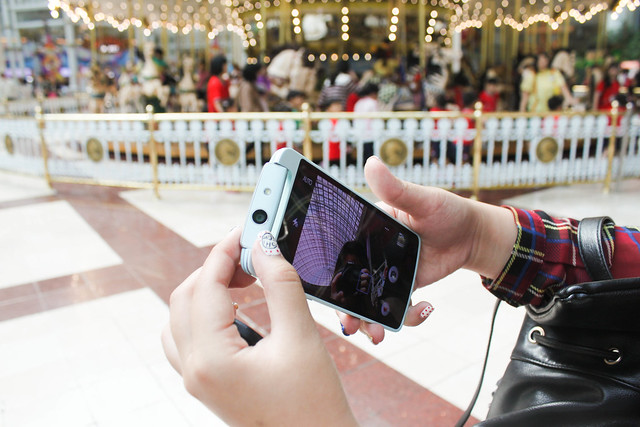 The camera on the Oppo is a 195 degree rotatable camera. You know how your front camera is always just that bit shittier than your back one, even in bright sunlight? Not a problem anymore. 13 megapixels of glory, here I come. It’s not just selfies – the rotating function gives me a good angle on flatlay shots, high angle shots, and so on. Because the camera was so sharp and crisp, I found myself reaching for it a lot more than I did for my DSLR, especially in places like Lotte World where it’s cumbersome to keep reaching into my bag. The phone is user-oriented (which phone isn’t?), which means that it has all these handy functions, my favorite being the fact that when you rotate the camera around, even if the phone is sleeping, it immediately activates the camera for use. Very handy for lazy people like me. Way more reliant on this than I’d care to admit. There’s also a GIF mode, which ups its cool factor, but I didn’t use it because I don’t like how grainy GIFs are.

On the other hand, I used this for a month to great pleasure but I don’t know how I feel about using this for two years. Obviously if you drop the phone at an angle, the rotation mechanism might dislodge or spoil. It’s not a critique of the phone, it’s just life – moving parts are always the first to go. But honestly, this is a phone you’d want to take care of, so I guess it’s less of a problem than it would be with a less pretty phone. Life lesson in superficiality right there. 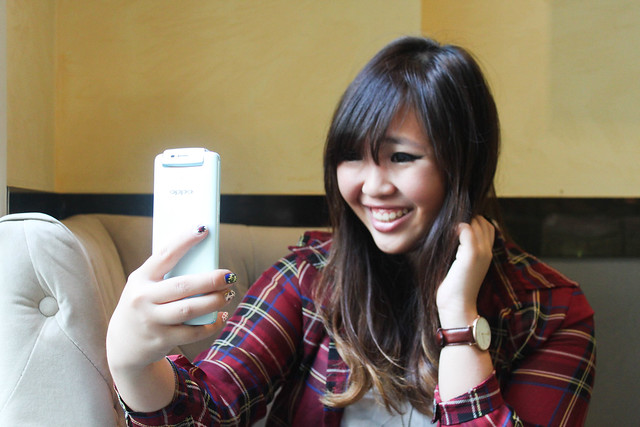 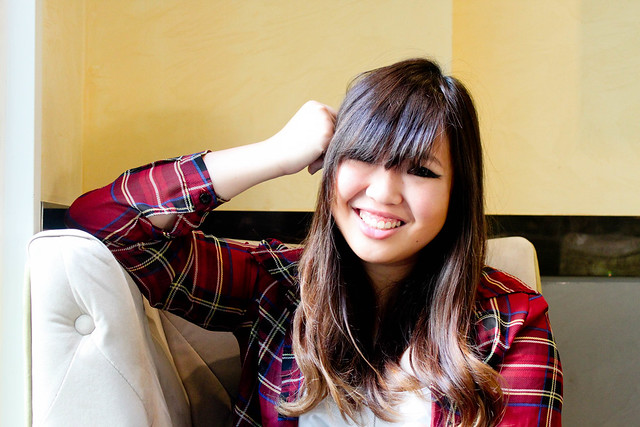 Obviously. They were right – I took a disgusting number of selfies on the Oppo. I’m ashamed of myself. It was great though, I racked up a lot more photos together with my girlfriend Cindy than I would have if I were just shooting on my camera simply because we could wefie all the time. I find that if you take too many photos successively in the snap snap snap snap within a second kinda way, the camera tends to hang a bit.

Because they know you’ll be using it for selfies, there are options for all sorts of things inbuilt into the main camera app itself. Beauty mode, so your skin is smoother and fairer. A timer, if you’re using a selfie stick. Und so wieter. It’s a mirrored selfie, meaning it’s from the perspective of how you’d look in a mirror and not from another person’s point of view, which is nice. I was so used to seeing myself in beauty mode on reflection that I got a bit of a disconcerting shock looking into the mirror when brushing my teeth in the morning.

You can see the quality of the photos for yourself on instagram by tracking the hashtag #jemmaforoppo. You’ll see what I mean – all the photos are amazing! There’s this thing called Ultra HD mode where they use Pure Image 2.0 technology to pick out the best parts of six consecutive images and combine them into a 24MP HD picture. Unnecessary for me if I’m just going to be using it for instagram, but it was cool when taking pictures for web. 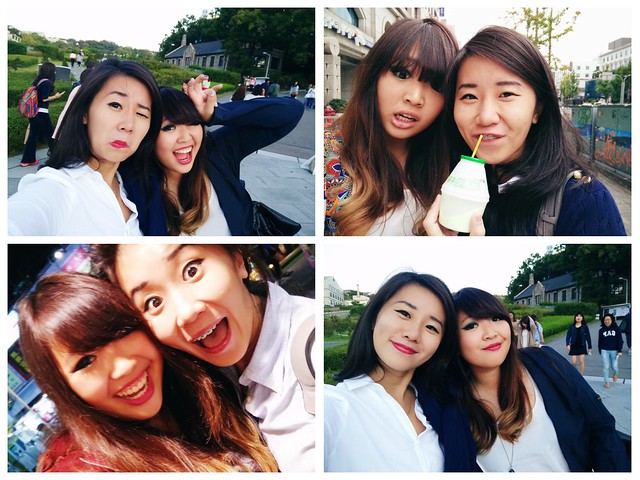 Other functions I didn’t really use but thought were cool were the slow shutter mode for light effects and audio photos. Audio photos are a bit like multisensory diaries for lazy people, where you take a picture and record yourself talking afterwards, bringing whole new meaning to the phrase: Your phone is your whole life.

The Oppo is pretty big on security. I didnt need to use this much because I didn’t have a sim card or anything private on my phone (I only used it a month!) but these features are essential must-knows for anyone considering the Oppo.

There’s this thing called Guest Mode – for when your friends want to borrow your phone to browse photos, or make calls, or whatever. You can turn it on with a password and it goes into a parallel mode where only certain functions, chosen by you, are accessible. Your messages, photos, contacts, or other apps you want kept private, just won’t be accessible.

Also, Quiet Time. For when you’re sleeping or studying, and dont want to be disturbed. You turn it on and all notifications are silenced. But how does that differ from normal silent mode? You ask. Firstly, you can determine how long you want it to be on QT for, while on silent mode it’s just silent till you turn it back to normal mode. Secondly, they make provisions for emergencies. Say someone wants to call you urgently because of a hospitalization or some super important crisis. After three missed calls from the same number, your phone starts to ring loudly, telling you that this call was important enough for someone to make thrice. It’s very.. human.

I already mentioned the phone activating when the camera is rotated. Other things that are convenient are the off screen gestures – the Oppo has buttons, but doesnt want to use them as far as possible, so you can actually double tap on the screen while your phone is sleeping and it’ll come alive. This eliminates the need for fumbling around for the power button. Also, they have a pull-down gesture panel where you can customize symbols that you can draw to pull up certain apps. All these are adjustable in settings, of course. The only thing is, when the phone was in my pocket it pulled up apps out of the blue sometimes. I suppose it might have brushed against something or knocked the volume/power buttons accidentally, but that was slightly annoying.

This is something you just can’t fight. The price point for the Oppo is fantastic. The last I know, it was going for under a hundred dollars if you buy it with a contracted plan in Singapore. That’s way attractive. 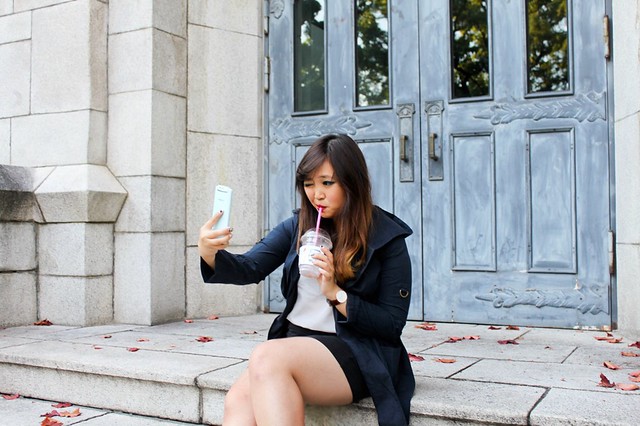 For those of you who don’t know what the difference between the two are, here it is: Functionality focuses on whether you can do what you need to do, ie. if the product works as it should. Usability focuses on HOW the consumer uses it and the consumer experience.

For usability, I’m not so sure. It is of no fault of Oppo, but more of an OS debate that I’ve been having with some of my friends for a long time. Oppo runs on the Android OS. As an Apple user, I’m used to the way my phone works for certain things. Square mode for taking instagram photos. Etcetera. But more importantly, I’m very, very reliant on certain apps that only work well on Apple. Afterlight is one of them. Actually, Afterlight is the main thing. Pudding camera is another. I feel like 50% of your picture is how well you take it, and 50% is post processing, so apps are super important here. Now, if you use VSCO or something else that runs perfectly on Android, then that’s great. But if you’re like me and you depend on things that only work well on Apple, then things become a bit tricky.

The last I tested Afterlight for android, which is new, it was slow, took forever to apply filters, and didn’t have as many filters as the Apple version of the app. The pudding camera, which works perfectly on the iPhone, has a problematic camera in the latest Android update, and based on user reviews, dont seem to be resolving itself anytime soon. It boils down to culture – if developers keep developing superior versions of apps for the Apple store, then it becomes very difficult for phones to target the apple market for switchovers, because no matter how good your phone is, you cannot control the app developers, and apps make up a large part of the user experience. It’s the reason why the Windows phone, despite all it’s beauty, has flopped. (I actually liked the windows phone). It’s the reason why people started moving away from the Blackberry. People want things other people have, and they don’t like being left out.

Of course, this might just apply to me. I’m sure a lot of angry android users are ready to hit the comments and tell me how wonderful their android phones are – which I dont disagree with, I love android phones. I was sorely tempted by the HTC One, which is a thing of magic, and I love the Oppo as well. But if you ask me to switch completely from an iPhone to an Android phone, it becomes very difficult because I rely very heavily on these apps and there actually isn’t a compelling reason to switch if my iPhone is working – not fantastically – but fine.

Thank you for sending over the N1 Mini, Oppo Singapore! I had a lot of fun with it. x