I feel somewhat like I’m writing more and more how-to posts than actual narratives from the places i’ve been. Still, for both my own bookmarking purposes and in the spirit of being generally helpful (..?), i’ve finally gotten round to compiling the list of phone applications I found most useful during the course of my seven month long trip. I did a bit of sounding out on my twitter about general interest in this post and you guys responded rather positively, so here we go!

I’m using an iPhone 5s but most of these apps have an android equivalent. I’ve given up on trying to use my blackberry for anything other than email and text.

A note on battery usage:

When i’m traveling, if i don’t get a local sim card i always turn my phone to airplane mode. This is because I use it pretty frequently to take photos interchangeably with my cameras, and I need to conserve battery. However, most of these apps need you to have a signal at least, so turn it on and off as and when you need it. 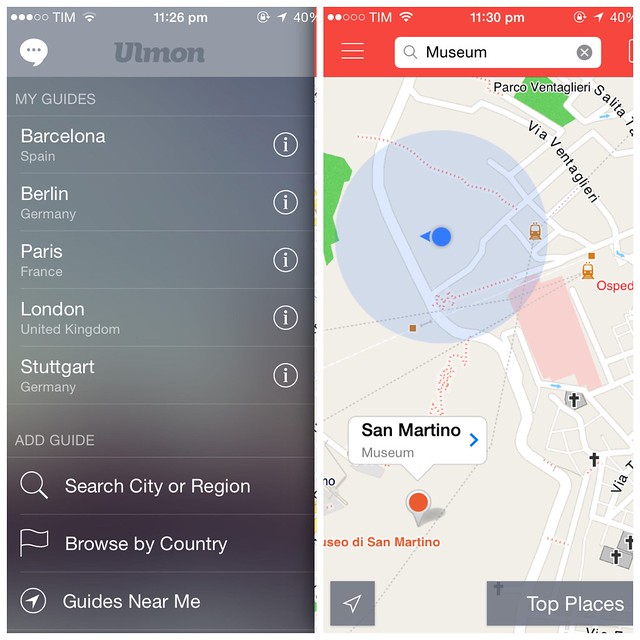 Despite my strong disapproval of any professional application (or person, actually) that uses “2” instead of “to”, this is an amazing application. It’s basically offline maps for whatever city complete with a wiki guide and a gps locator. The free version gives you free maps for five cities with one extra with every person you refer, but they’re forever running special offers where you can upgrade to the pro unlimited version for free, which is what I did, so I suggest you download the free version now even if you’re not planning to travel soon and then wait for the pop up notice that says UPGRADE TO PRO FOR FREE TODAY ONLY!!!!

And then before you go to any new city, download the map for that country the night before and you’re good to go! It’s the best. I love it because despite all those articles on travel hacks, i still don’t understand how to do that stupid “ok maps” google maps hack. But whatever, i don’t need to be tech savvy. I have City Maps 2 Go.

Download it here for iPhone and here for Android 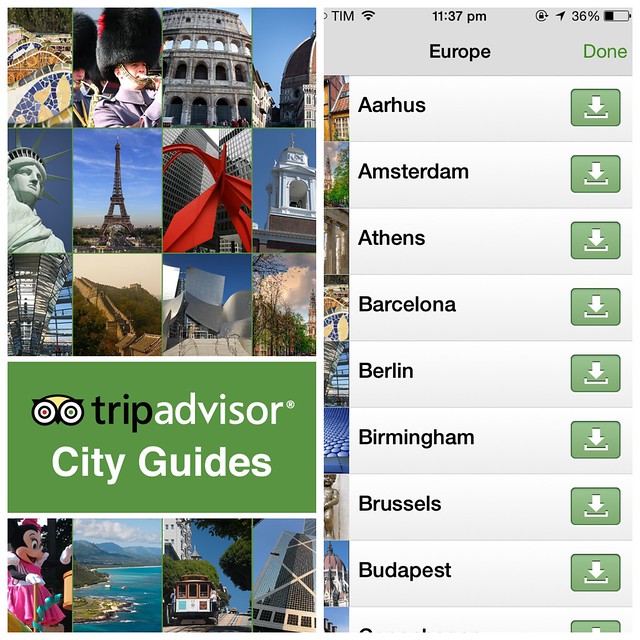 Because who doesn’t use trip advisor, am i right?

Trip advisor has a bunch of apps that all do different things, but you should download the city guides one. It’s also an offline maps application, and you can save destinations that you wanna get to and then access them while out. It’s got a bunch of features, but the thing i like most about it is the Point Me There option for noobcakes like me who can’t read maps. 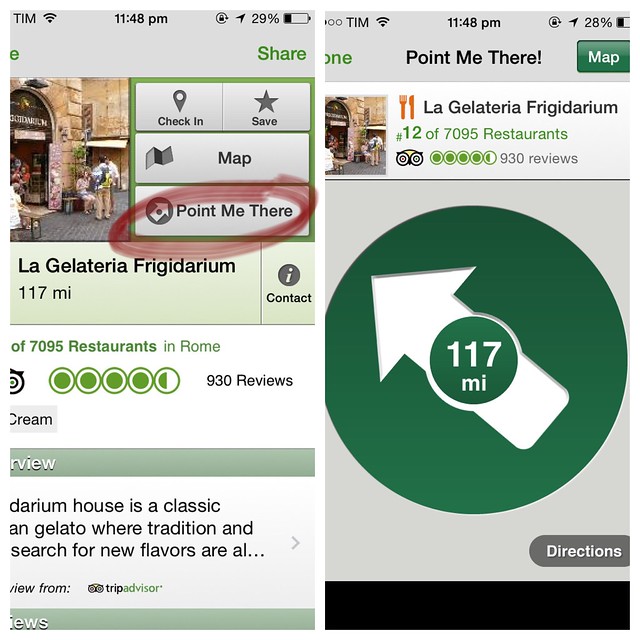 I hate it when I’m trying to figure out how to read a map application and after like fifteen blocks of trying to find the little blue dot i realize I’m walking in the wrong direction. It happens more often than i’d care to admit. This app is awesome because it’s just one huge arrow that points you in whatever direction you need to be in and you can just follow it blindly. It works offline, and it’s idiot proof.

The only thing about this app is you’re limited to the city guides that they have listed in the application, so if you go to a less popular destination they may not have it (they don’t have Stuttgart, lol). But if you’re sticking to the main cities like Amsterdam, Budapest, Rome and so on, it’s perfect.

Download it here for iPhone and here (called City Guides Catalogue) for Android.

I hate the fact that Foursquare has split into half and now if i want to check in i have to download their new Swarm app or something. Whatever happened to streamlining? Now I just don’t check in anywhere anymore because i refuse to waste phone space on another application, which is a pity because i kind of liked collecting all the badges and what not. Still, it’s one of the apps i rely on the most.

This app works best if you have a local sim card, but if you don’t i guess you can just use it while you have wifi and save the directions or something within the app. I always use the “Best nearby” function to search up what’s the best thing to do in the area, and save it to a personalized list named after the city. You can read the tips left by other users as well, which are really hilarious sometimes. My favorite tip for London’s Victoria bus station is “This is where pigeons like to poop because they know we’re all poor people who can’t afford trains“. It cracks me up every time. Fantastic way to burn time, reading these comments.

But I digress. Back to mapping – I save all the places I’m interested in into a list, then when I’m out and about and i don’t know what to do next, i go to the list and activate map mode. This then shows me which of my “to-do” destinations are near me and how to get there. You can walk there via the in-app map or choose to open it in Google Maps. Pretty nifty. 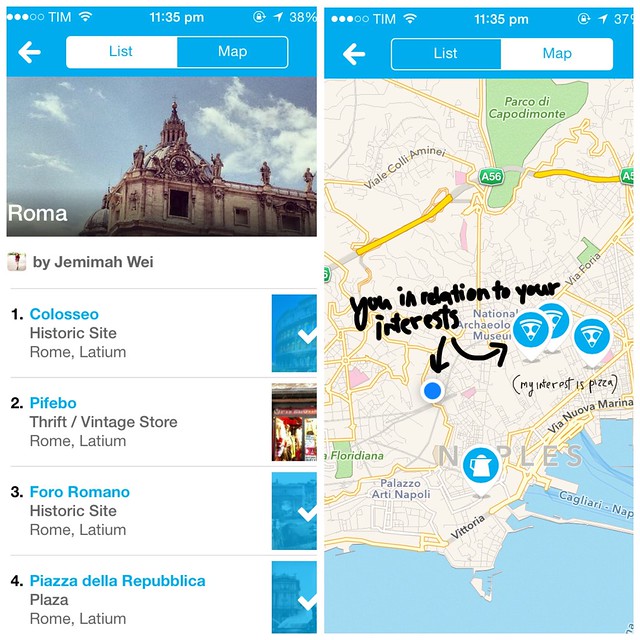 If I don’t have anywhere saved, I just search for whatever’s near me that’s recommended by other users – it’s always proved reliable so far and is how i found out about Anauco Gourmet in Barcelona, which serves the best burgers in the WORLD, amongst other things. 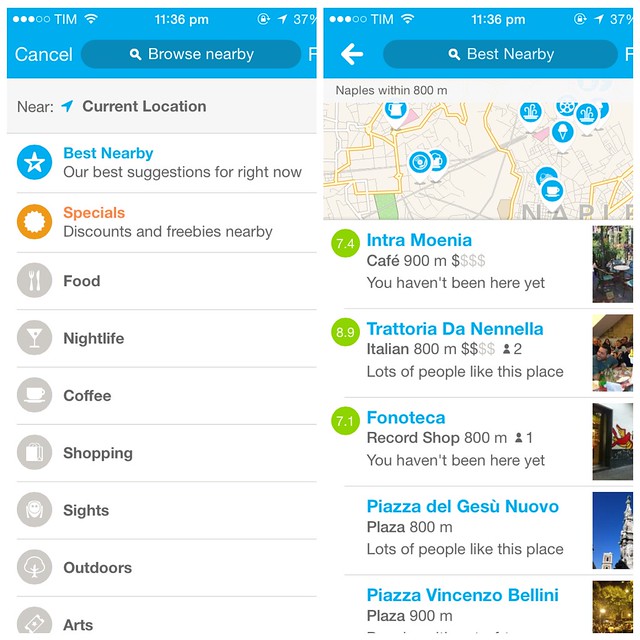 Other reasons why foursquare is awesome: I’m always typing stupid search terms like “toilet” and “wifi” in the search box – other users always leave comments telling you what the wifi password is or where the nearest toilet is. It’s like a secret society of people who understand what it’s like to need to pee urgently all the time. It’s awesome.

Download it here for iPhone and here for Android.

This does exactly what it sounds like. You pre-install dictionaries like “German-English” or “English-Italian” and you can translate words when you’re out and about. You can’t translate phrases beyond those they have pre-loaded though, just individual words, but it’s better than nothing. I use it quite a bit in places that don’t use English much, like Spain or Italy. This is mostly applicable only to iPhone users though, because if you’re using Android you can actually download offline dictionaries from Google Translate directly. Because Google is discriminatory against Apple like that.

I use the free version because whatever, ads don’t bother me. It’s got an extremely basic design with only functionality going for it, but it works fine. If you don’t like ads then just get the pro version, but the ads in this app aren’t that in your face so i don’t know if it’s necessary, really. 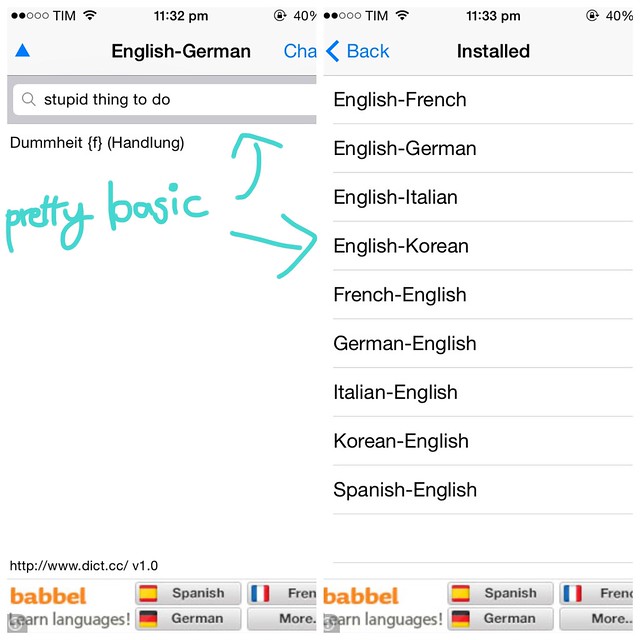 Download it here for iPhone and here for Android. 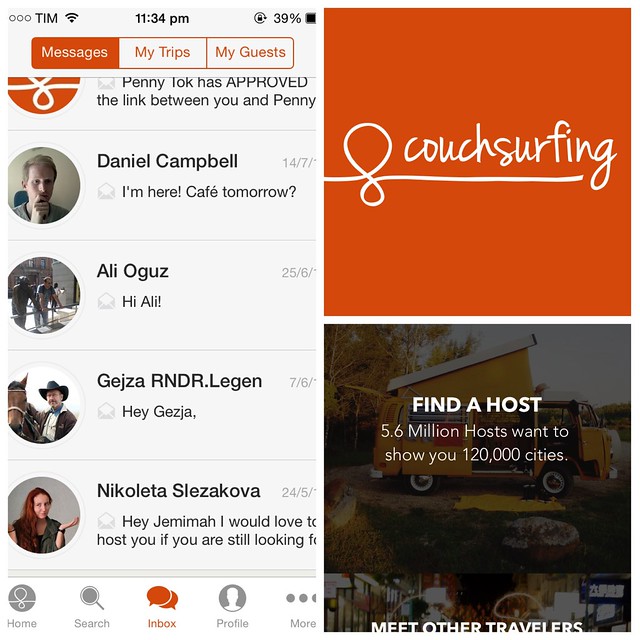 Again, this may not be for everyone. It’s basically an extension of the couch surfing website, and allows you to access your CS messages, look for hosts and so on. It’s very useful for me because I couchsurf quite frequently, and i don’t want to have to open up my computer to access my inbox every time. If you’re in a new city and something messes up with your accommodation, and you need a last minute host, you can put out a desperate plea for help and someone will almost certainly take you in. Also, if you’re traveling alone and you don’t mind hanging out with strangers, just put out a notice on the site and a bunch of people will be like OH I KNOW THIS AWESOME PLACE FOR DRINKS LETS GO TOGETHER and just like that, it’s a party.

For those of you not so clear on what couchsurfing is, you can read my Broke Student’s Guide to Couchsurfing here. 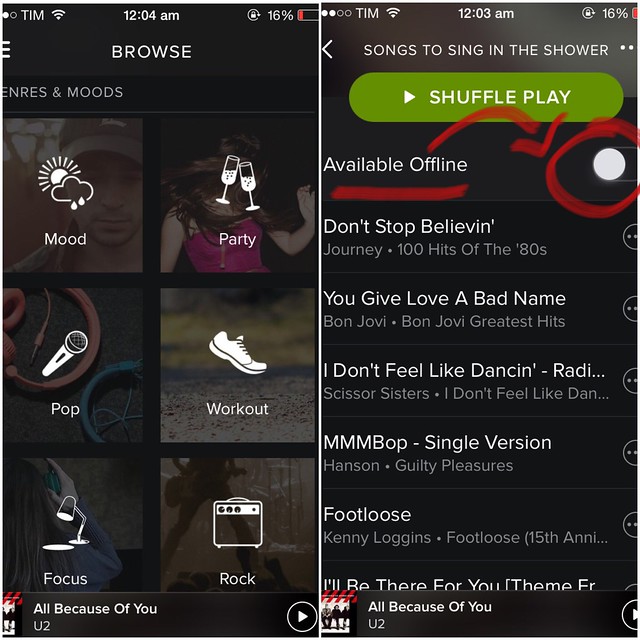 I know this isn’t really a travel app per se, but I can’t live without Spotify. I’m not even sorry for the melodramatic theatrics. I have Spotify Premium, which allows for offline syncing of your playlists to your phone or iPod, and I’ve spent countless inter country train rides plugged in to Spotify while doing my writing or reading. And whenever Im running out of space on my phone i just de-sync a couple of playlists and it frees up space – much better than agonizing over which songs to delete in iTunes. A disclaimer: I am a Spotify Ambassador, but trust me when I say I would get Premium even if I weren’t. It’s ten bucks a month to get rid of ads and allow offline syncing, and that’s just the beginning – you won’t even feel the ten bucks, and it’s good for your conscience because you’re not illegally downloading music! I’m just saying.

Alright, that rounds up my favorite travel apps. I also suggest buying a portable charger because it comes in handy for travel – although if you only use your phone on airplane mode to take photos usually an iPhone can last a day without problem. I’m currently using the XiaoMi phone charger and it’s perfect. I hope this was useful to you guys, and you know the drill – drop me a comment if you feel like i missed out any SUPER CRUCIAL travel app, because sharing is caring you guys.