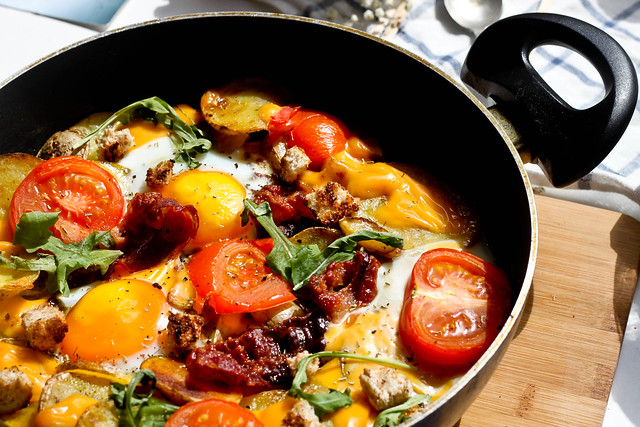 I seem to be spending a disproportionate amount of time in the kitchen, which isnt a very promising statement on feminism if im making a living example of the fact that once a woman has free time all she does is read and cook.. Anyway. Split between a desire for instagrammable material, boredom while the boyfriend spends the entire weekend watching soccer (damn you, EPL), and rapidly expiring food in my fridge, I whipped up this skillet of mishmash ingredients last weekend. Still, comments on facebook, questions on askfm and most recently a conversation with Amanda (better known to you guys as @beautifuladieu) made me realize one thing: most people are under the severe misapprehension that i can actually cook – no, no i can’t. I’m hopeless at it, i dont know the difference between the different types of pans and have no idea what tarragon even is.

Which is why most of the recipes I post here are idiot-proof approximations cooked up while randomly cracking things in the kitchen and making note of the things that don’t burn. Maybe one day I’ll really learn some legitimate cooking skills, who knows? But for now maybe it’s best I relabel my recipe posts ‘FOR NOOBS WHO CAN’T COOK’, primary noob being myself. Anyway, today I’m here for vague instructables regarding my most recent invention- the random baked skillet.

REQUIRED:
– 1-3 eggs, depending on size of your skillet
– a skillet
– potatoes
– other things you like to eat/ about to expire in your fridge
– oil
– an oven

PREHEAT THE OVEN (i always forget this)
to 180 deg

1. Cut 2 potatoes into strips and dice the rest. Cook them by heating up some oil in the frying pan and putting the strips in, flipping till both sides are golden brown. Do the same with the diced potatoes.
*this will take awhile so the following steps can be done while waiting
*you can also choose to strip all the potatoes but i couldnt be bothered because diced potatoes cook so much faster and also only the top layer needs to look nice anyway

2. Fry bacon in separate pan, drain and put it away on a plate.

3. Dice the onion at the same time and fry with sliced up hotdog on the same pan till onions turn translucent. Set aside.

4. Mix the diced potatoes and onion/ hotdog mix in the skillet and arrange it with a spatula till it’s relatively flat. Lay out the nicely sliced potatoes on top to make a top layer that looks more coherent.

5. Put bacon and strips of cheese on the top.

6. Crack eggs directly onto the skillet, spacing them apart evenly.

7. Bake in oven for about 10-15 minutes till the eggs are properly cooked (you can tell because the egg whites will be, well. White.)

8. Garnish with salad of choice (I used rocket), grind some pepper on top because it looks nice in pictures, and serve immediately. 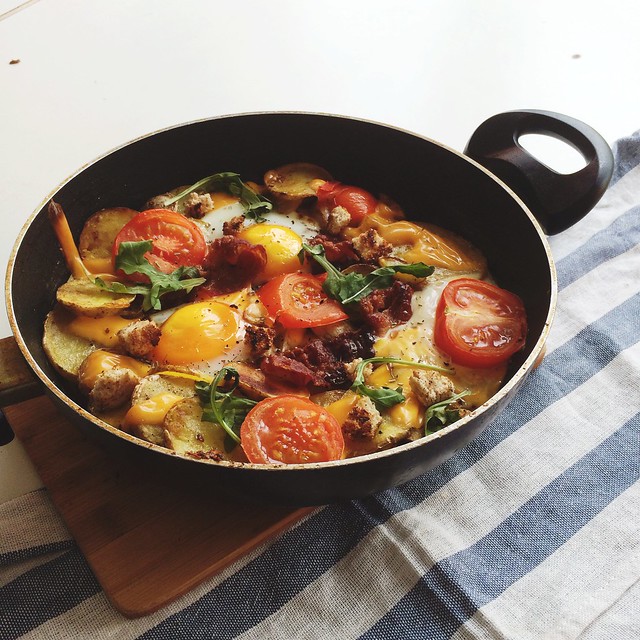 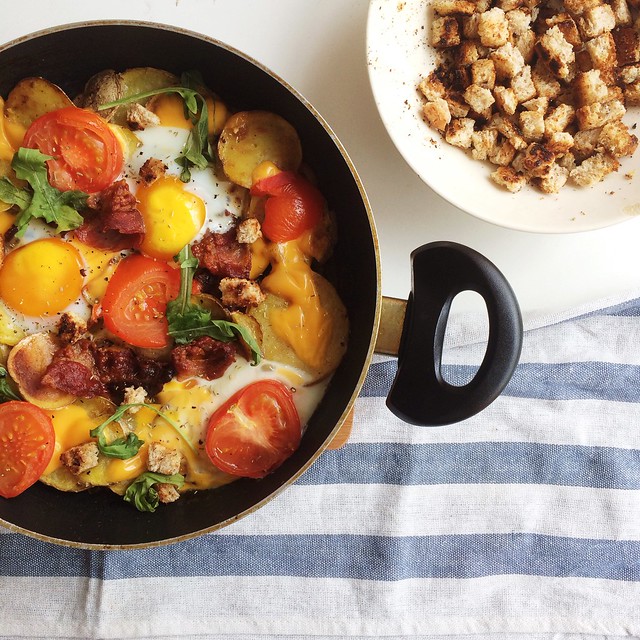 Enjoy! Not bad for an attempt to rid my fridge of everything about to expire, huh. It was GLORIOUS. Also, I was bored while waiting for it to bake, so i made croutons. Croutons in a sentence: cut your bread into equal strips and fry them in a buttered pan on both sides till evenly brown. Got it? Got it.