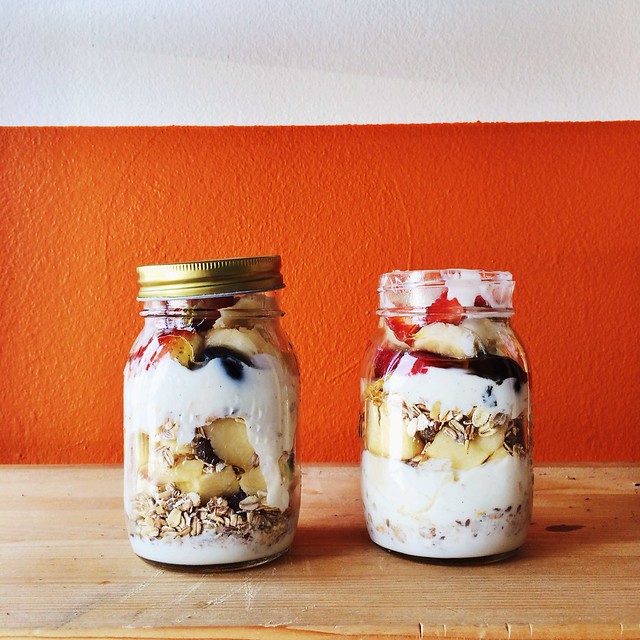 I’ve recently developed a new addiction to mason jars – basically pretty molded glass jars commonly used in canning to preserve food. Admittedly, I first hopped on the mason jar bandwagon for instagram/pinterest related reasons – have you seen how gorgeous these things are?? Belatedly though, I started realizing that these things have the rare advantage of being both pretty and useful, which sadly applies to very few people things nowadays. Combined with my propensity for waking up too late to do anything more than throw on whatever’s on top of my wardrobe and hop out of the door mumbling shit shit shit shit and making for school most days, I’ve also taken to making food the night before to bring along to wherever I’m headed the next day, school or road trip. Because they’re so hardy, you can bake or freeze stuff in your mason jars, which is fantastic for making single serve brownies or salads or whatever suits your fancy, really. They’re also airtight, which means you can even fill it with a smoothie, screw on the lid and toss it in your bag without fear of it making a mess as even the best tumblers are prone to do.

But this isn’t a mason jar advertisement, and I’m getting carried away as i so often do. I just wanted to pop in here today to post up the recipe for an overnight cold tuna pasta salad, which is the easiest thing to do in the world, really. I made this in half an hour the night before my road trip to Switzerland so I could grab it from the fridge at 6am the next day (the worst part about road trips is undeniably the awful hours you have to get up at) and have it for brunch on the road. Super easy and one of my favorite dishes – i think sometimes i forget how much i love tuna. 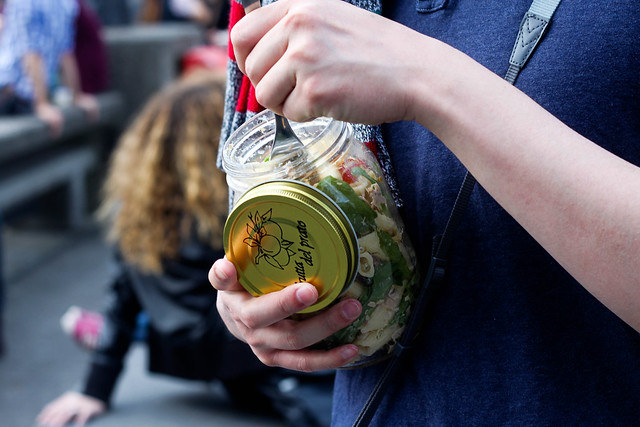 Ingredients:
– Pasta
– Salad leaves (I use rocket)
– 1 can of tuna
– Some mayo
– A squeeze of lemon juice (optional)
– Whatever else you like in your salad

1. Cook pasta according to box instructions until al dente. I used penne, but I think pasta shells would do nicely as well.

2. Drain pasta and run under cold water till room temperature.

3. Meanwhile, mix your can of tuna with some mayo (how much you want to add depends on how creamy you like your pasta) in a separate bowl.

4. Add tuna mix to large mixing bowl with pasta, throw in salad leaves and whatever else you’d like. I used cut tomatoes, sliced boiled eggs and rocket salad. Toss. Sprinkle some salt and pepper to taste. I also squeezed a bit of lemon juice over it.

5. Serve immediately, refrigerate for a couple of hours before serving, or do as i do and leave it overnight in a mason jar ready to be eaten first thing the next day.

Voila! Isn’t that the easiest thing. You could do it with one eye closed – you dont even have to keep a particularly keen eye on the stove. I love this recipe so much – and it’s perfect for hot summer days because it’s both savory and refreshingly cold. Not that it’s fully summer season here in Germany, or maybe i’m in denial, but either way, so much love for this mason jar of wonders. Hurray for effortless mornings is what i am saying.

PS. You can get your own mason jars here.