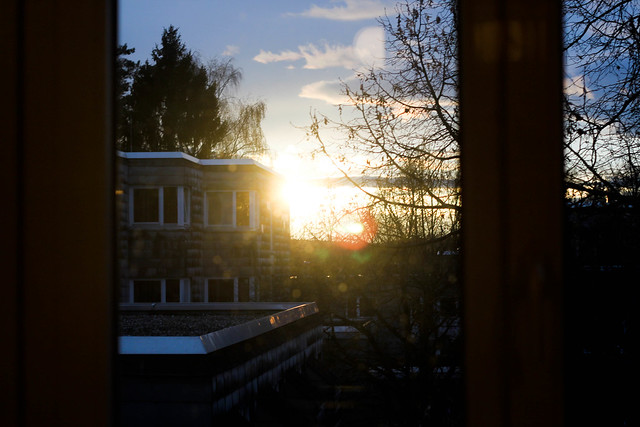 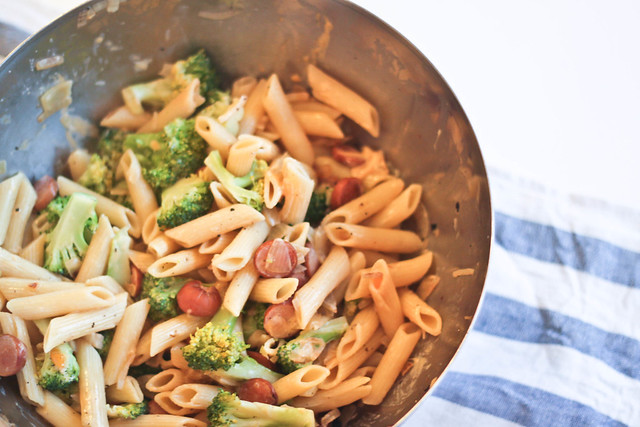 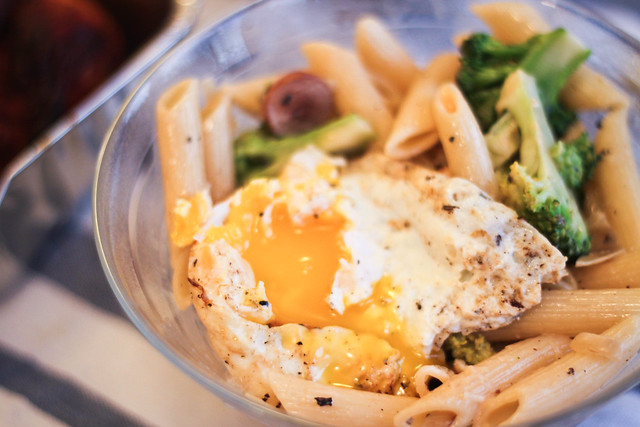 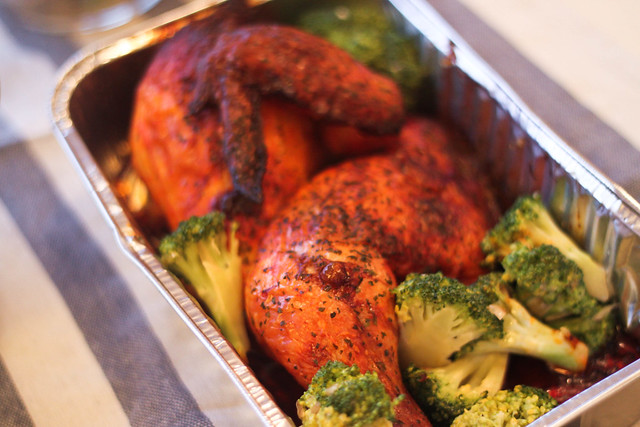 Saturdays here in Germany see live-streamed soccer in the afternoon, which means I’m essentially dating what might easily be mistaken for a pillar.. or some sort of unmovable rock camped in front of the computer screen. I fought it for the longest time but soon it became evident that soccer players with their scrunched up faces of determination are, undeniably, kind of cute. Make that two unmovable rocks.

By virtue of the fact that soccer goes on all day though, I’ve taken to cooking during half-times and boring matches because lets face it, if I don’t cook here we’re both going to starve because they don’t do McDelivery in Europe. Last saturday’s honestly embarrassing Arsenal/Man U 6-0 trash had me googling recipes and whipping up one of the easiest budget meals ever which still holds its own when it comes to photographs for instagram.

Ingredients:
2 x chopped up sausages (hot dogs will do depending on your standards of laziness)
1 x brocoli head, chopped into small broc-tree flowerless
As much penne as you want
2 x small yellow onions, finely chopped
Some cheese
Salt
Pepper
2 x eggs

(This serves two and took me about fourty five minutes, vary ingredients based on how many people you’re feeding and your own preferences)

1. Boil water in pot and cook Penne according to box instructions
2. On another stove, heat pan and add chopped up sausages once the pan is sizzling. Let it cook, flip occasionally till both sides are brownish. Add chopped up onions and stir everything till your onions turn translucent-ish. Use a ladle to dish 2 servings of water from pasta pot into your pan and let the mixture boil.
3. Drain penne once done and boil water again to cook your broccoli flowerlets.
4. Put everything into one big serving bowl and mix well, adding cheese if you want (hint: you do want it) and salt and pepper to taste. I use torn up bits of Kraft cheese slices, and you’ll find that the heat from the pasta mixture will melt it pretty well while stirring. I’m pretty generous with the pepper, and you can add as much salt as you see fit. Keep stirring and tasting till you’re satisfied, then dish out and serve.

Overeasy eggs basically refer to sunny side up eggs that are fried on both sides with runny yolks. They’re amazing and incredibly easy to make, so no excuses for not learning this one.

1. Heat up your frying pan with some butter – make sure the melted butter covers the bottom of the pan because you need to flip your eggs later. Once the butter is sizzling, crack one egg directly onto the hot pan. I did two at one go because I’m too lazy to do the whole thing twice, but if you’re not confident of the flipping bit then just do one.
2. Scatter a pinch of salt and pepper onto the surface of the now sunny side up egg.
3. When you think the bottom is sufficiently set, flip the eggs over carefully so the top bit cooks as well. Just give it about five to ten seconds, then dish it out onto your pasta! Voila. Instagram worthy food.

The great thing about overeasy eggs as compared to poached or sunny side ups: it’s okay if you accidentally burst the yolk while flipping it. Just let it fry a bit and it’ll still be ready to go. I feel like it’s like a very comforting and forgiving version of the poached egg.

I suggest you start cooking about 4:30pm so when you’re done it’s 5 plus and the light’s great for taking photos, because 1. Asian and 2. If you don’t instagram it, did you ever really cook it? Did you really? 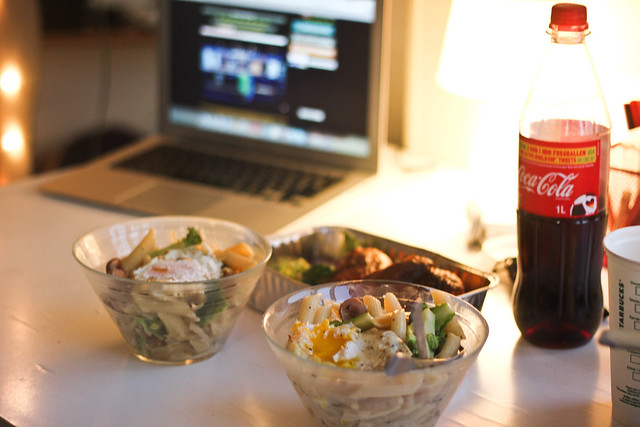 Settling down for soccer with a slightly more updated version of the classic TV dinner. No recipe for the herb grilled chicken because I just bought that already marinated from the grocer’s and popped it in the oven. Still, it was a good dinner, albeit the disappointing fight put up by Arsernal. Look at me, all affecting to know stuff about soccer. Let’s pretend we all don’t know I really lifted that straight out of the boyfriend’s mouth.