So I’ve gotten a bunch of requests to review a John Green novel, which I technically have done before. I was seventeen and reviewed Looking For Alaska on my old blog once, and i’m not linking it here because it’s embarrassing and i regret it and basically i am embarrassed. At that time I was, for some reason, so damn enchanted with that stupid phrase that keeps popping up on tumblr and everywhere on the internet:

“So I walked back to my room and collapsed on the bottom bunk, thinking that if people were rain, I was drizzle and she was a hurricane.”

& if i’m honest with myself, it’s all these quotes floating around tumblr that really lead me back to books and get me reading them, even if they are shitty books. Boy, that says a lot about my literary choices. Good going, English major.

Anyway, I no longer care about spoilers because whatever, don’t read this book. Here’s the plot:

Teenager goes to boarding school to find “The Great Perhaps” and falls in love with this wild, sexy, screwed up chick who already has a boyfriend down the hallway called Alaska, and spends half the novel pining after her in this incredibly whiny and self pitying way. Turns out his huge life crisis and whole issue about ‘finding himself’ is actually a metaphor for the fact that he is depressed about not having a girlfriend, lol. He also kind of hooks up with this other chick while being in love with Alaska because he was lonely and is an asshole. Then Alaska drunk drives in the middle of the night and basically dies in the middle of the book (this is supposed to be some huge reveal, which i guess it is. Pretty momentous, i mean.) and Pudge (the protagonist. Did i not mention that his nickname was pudge because he is a skinny boy and this is supposed to be ironic and funny?) spends the rest of the book trying to figure out if she killed herself or was in an accident. There are other characters in this book too but it doesn’t matter because they’re not really fleshed out as anything other than supporting characters that either encourage or discourage the grand central romance that is the plot of the novel. 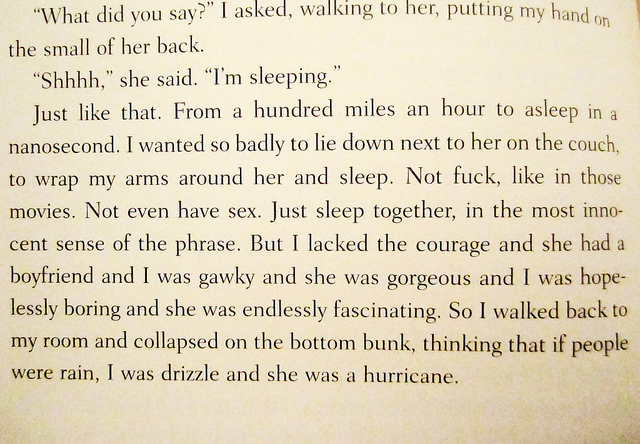 Entire passage basically summarized into one sentence: Whiny teenage boy has a crush on girl and wont shut up about his feelings

Why did I adore this book again? Oh right. Because I was a whiny, pretentious teenager.

Well anyway, I’m not proud of it but I loved the book when I was fifteen. But i guess being fifteen is a decent excuse for making stupid decisions. I mean, Taylor Swift wrote a whole song about it!

Thoughts about the book:

1. “The Great Perhaps”? Really? How about you just be a normal college student and like, study, instead of running off to search for this vague grand romantic ideal?
2. Protagonist is kind of a wuss.
3. The book is strung together by a list of quotable cliches but doesn’t make much sense as a coherent narrative whole.
4. Protagonist is kind of a whiny self absorbed asshole – because the whole world revolves around him and his not-so-secret crush on Alaska. I kid you not- at one point while discussing her death, he actually snaps at one of her friends because “I loved her! I loved her ok!”
Like, dude. You weren’t even dating. Chill.
5. When I bought this book i thought i was actually going to read about the country and self actualization through journey but no, the geographical location doesn’t appear once. Instead, it refers to a pretentious, unbearable girl (if you’re a reader, because if you’re a character in the book chances are you want to marry her because lol) who named herself Alaska because she looked at a globe and thought the word Alaska sounded pretty.

The book also ends like this: he doesn’t find out for sure if and why she killed herself (omg so i read half the book for nothing because there was no resolution) but decides to move on with life and let go of his love for her and ends the book by saying:

So I know she forgives me (for moving on), and I forgive her. Thomas Edison’s last words were: “It’s very beautiful over there.” I don’t know where there is, but I believe it’s somewhere, and I hope it’s beautiful.

Firstly, I don’t know what the big deal with his letting go of his love for her is because they weren’t even dating. It was a one sided, unrequited crush. Secondly, how the hell do you know she forgives you, she’s dead, and what makes you think she cares enough to forgive you even if for some unconceivable reason she’s watching you and not, say, her actual boyfriend, from the great beyond? And what makes you think she gives a damn that you’re proclaiming your forgiveness of her? I want to reiterate the point that it was a one sided, unrequited crush. It’s just like if one day I woke up and the auntie who sells me strawberry milk in the canteen says I don’t think you should be doing literature in college anymore because I don’t like reading. I simply don’t care.

Lastly, can we all just look at this sentence:

I don’t know where there is, but I believe it’s somewhere, and I hope it’s beautiful.

So anyway that was years ago, and I thought recently that possibly I’d been a bit too harsh with the novel when reviewing it in retrospect, so I picked up another one of his novels awhile back. I mean, the dude got nominated for a lot of literary awards, like the Printz Award, LA Book prize and so on. Nominated, not won, mind you, but it must count for something right?

It also made it to the New York Times Bestsellers List, but I’m ignoring that because ever since Fifty Shades of Grey placed top for that list I have since dismissed it as irrelevant and in bad taste. You really can’t trust bestseller lists nowadays. 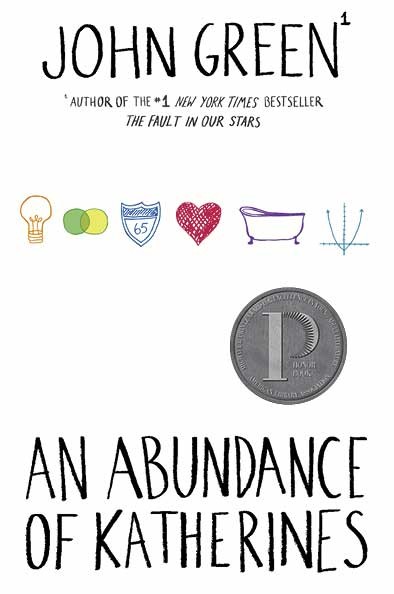 An Abundance of Katherines.

Let me summarize the plot for you (I can’t believe i actually finished the book, but it’s great cos that means that you don’t have to bother ever picking it up.)

Boy is depressed because he has dated X number of Katherines (dont remember how many) and only dates girls named Katherine, and they all dump him. Novel starts while he is in the throes of heartbreak from being dumped by a.. you guessed it – Katherine, and he starts working on a freaking mathematical theorem that will explain why he keeps being out of luck in the romance department. (You don’t need math for that bro, I’m a girl and I’m telling you it’s because you’re a whiny wuss.) So he and his best friend go on this roadtrip to find themselves and sort out their lives, and they meet this girl who is not named Katherine and who already has a boyfriend, and predictably by the end of the book he ends up with her and the big revelation is Wow I’m dating someone who’s Not Called Katherine and as the book ends I’m not even sure why any of us are supposed to give a shit about this.

Does this sound at all familiar?

Reading this I was genuinely baffled as to why noone has called John Greene out on recycling most of his plot elements and points and if we’re being honest – characters. But Jodi Picoult has written like fifty versions of the same book and people are still buying them, so ok, i guess.

I think the issue here is not just that the plot is boring (which ok, is an issue. it’s a crime.) but the fact that the protagonist is So. Damn. Whiny. The book is literally one very long, drawn out, whine about this boy and why he can’t get laid. It’s really extraordinarily annoying. If you want to get a girl, man up and ask her out, not sit around writing freaking mathematical theorems about why it wont work out. Jeez. Doesn’t take a genius to figure out why you’re still single, bro.

To be fair, the book started with a foreword consisting John Green citing this one negative blog review he had by this critic on the book followed by eight whole pages on how Green doesnt care and how the critic is wrong, because I wrote a good book and your opinion is wrong! So I guess I should have seen it coming. Like author, like protagonist, and all that. Hey, maybe i’ll be cited in John Green’s next book’s forward and he’ll start hating on me too! Except i don’t care.

Conclusion: Don’t read John Greene unless you’re the kind who doesn’t mind whiny, insecure teenagers. In which case you’re probably the kind of person who’s clingy as Lavender Brown in a relationship. Shudder.