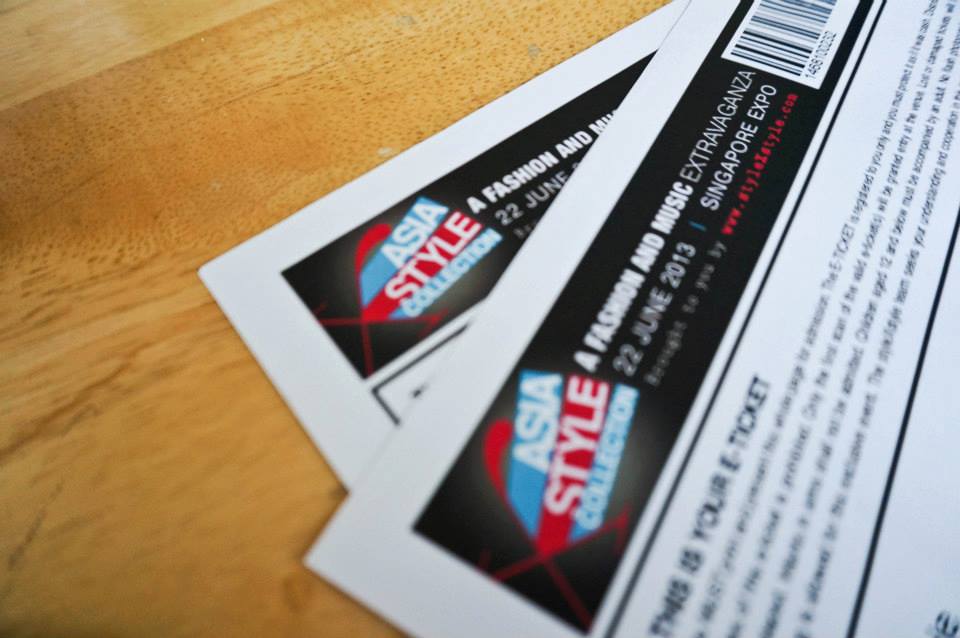 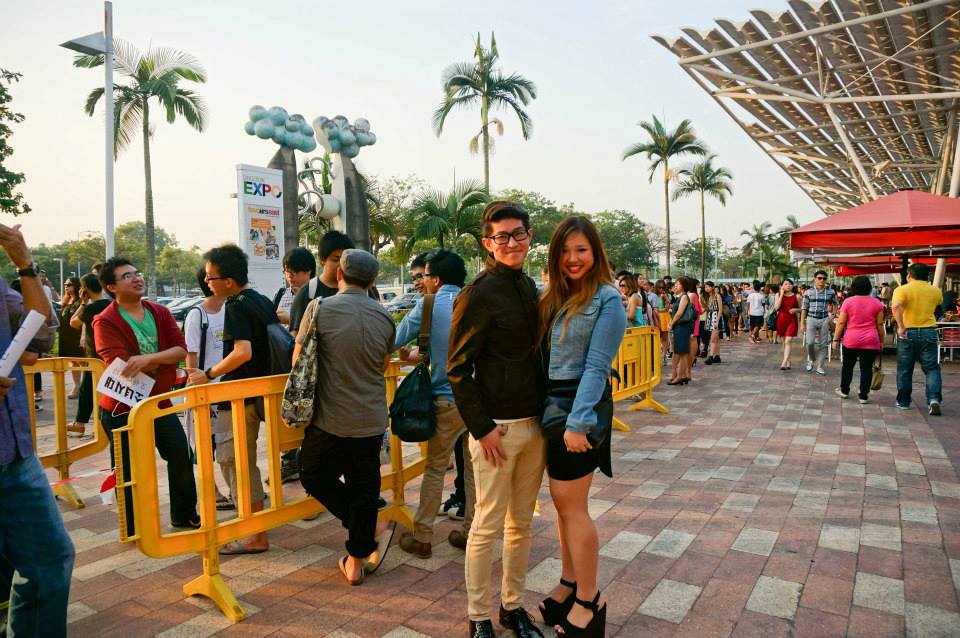 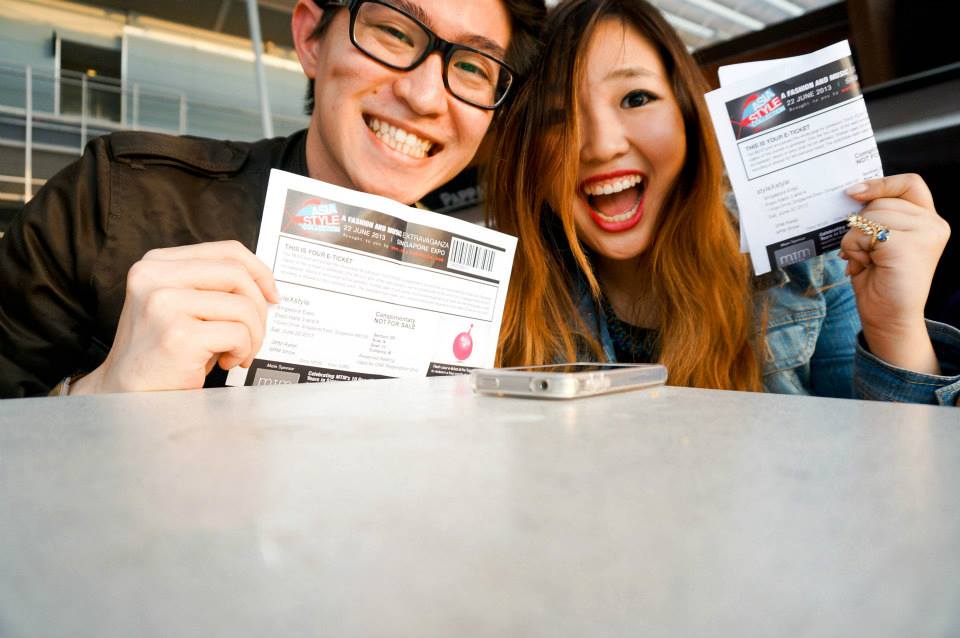 I was in the middle of watching Monster’s Univeristy over the weekend when Gillian asked me are you a fan of Kpop? Nope, I replied, and she went on: So do you wanna go watch a kpop/jpop concert x fashion show? and I was like that sounds like a lot of eyecandy so YES PLEASE GAME ON. So superficial but basically that was how Shane and I found ourselves rushing down to Expo on saturday for the Asia Style Collection 2013 by Style X Style. Before I go any further let me just put it out there that monsters university was GREAT, so adorable, my tuition kid gave me so much grief over watching what was essentially a cartoon but i dont care i loved it and all the cameos/ monsters inc references. If you loved the original Monster’s INC you’ll probably enjoy this too, and if you didn’t love the original Monster’s INC I’m sorry to inform you that you have a black, black hole where your heart should be.

Okay back to fashion and music. 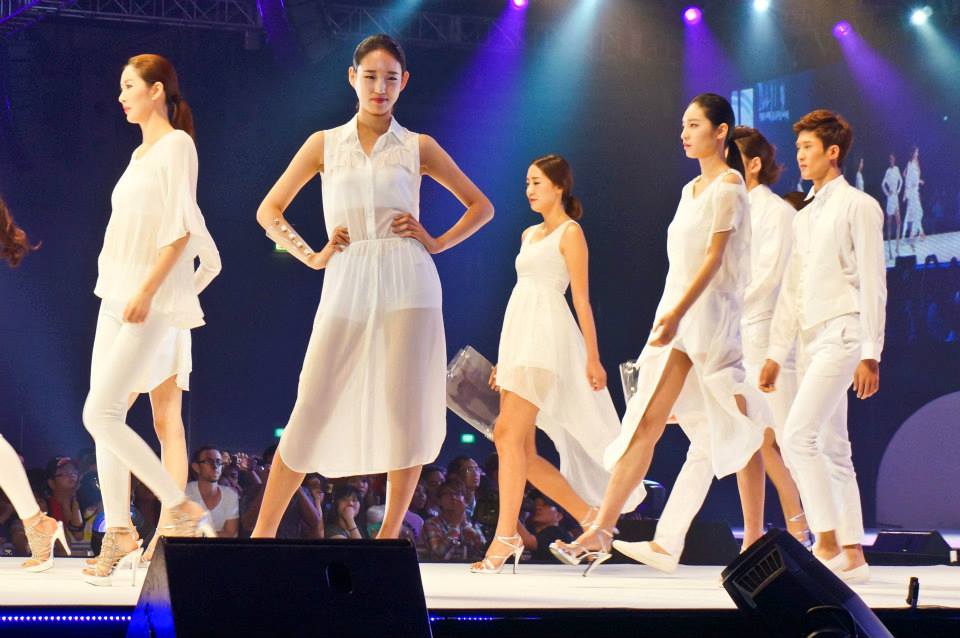 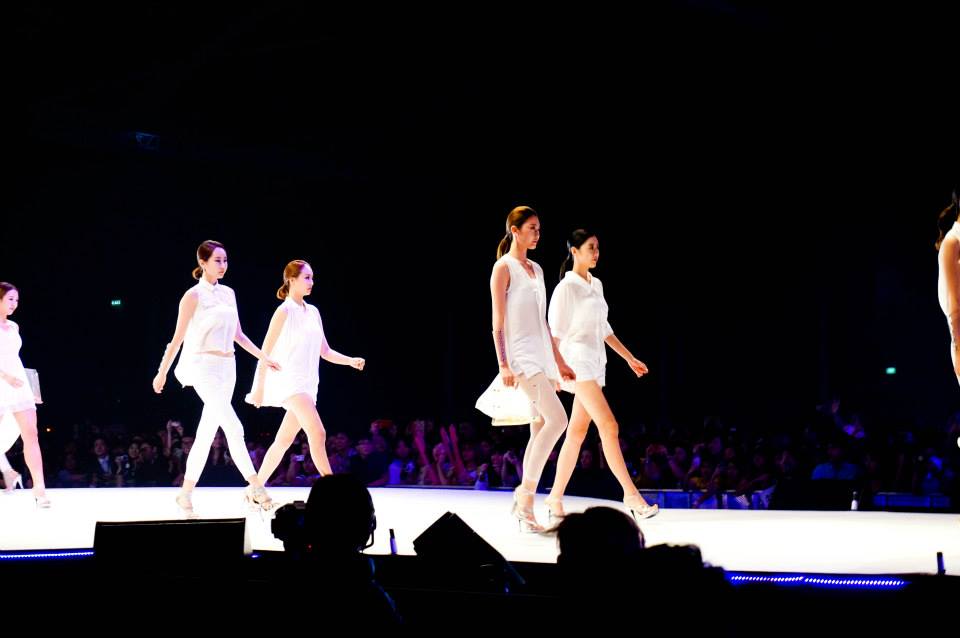 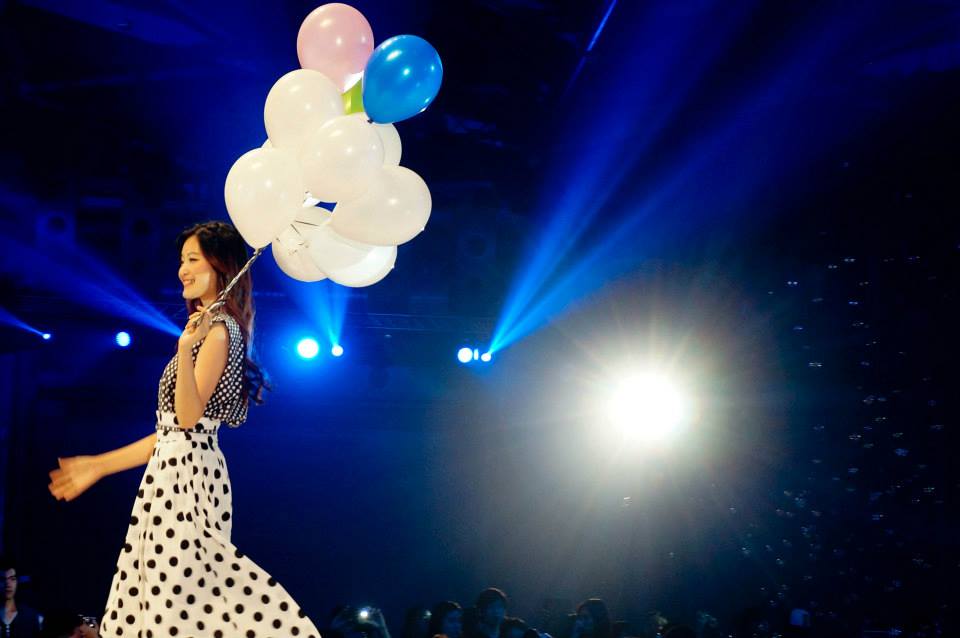 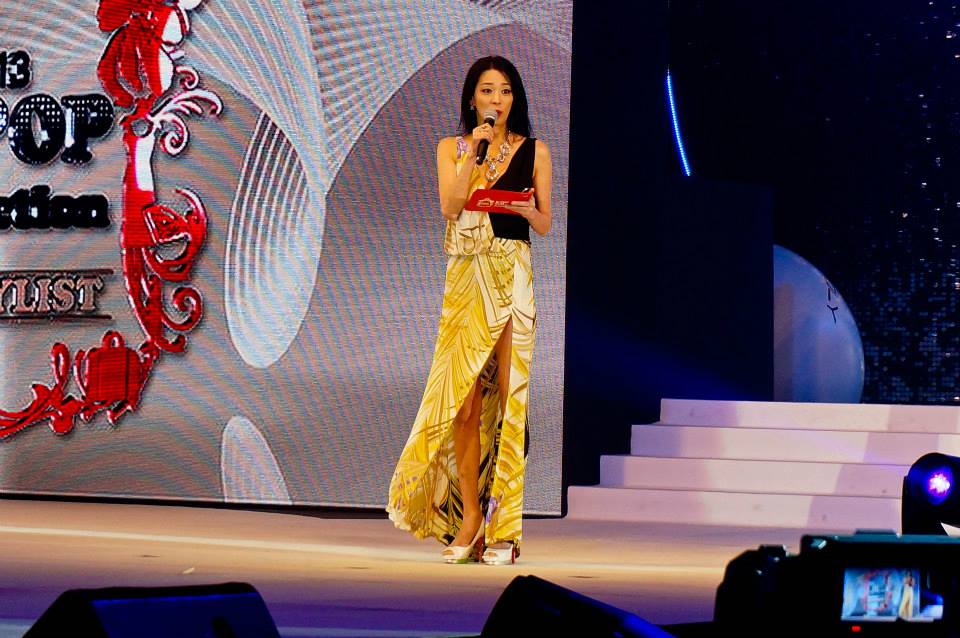 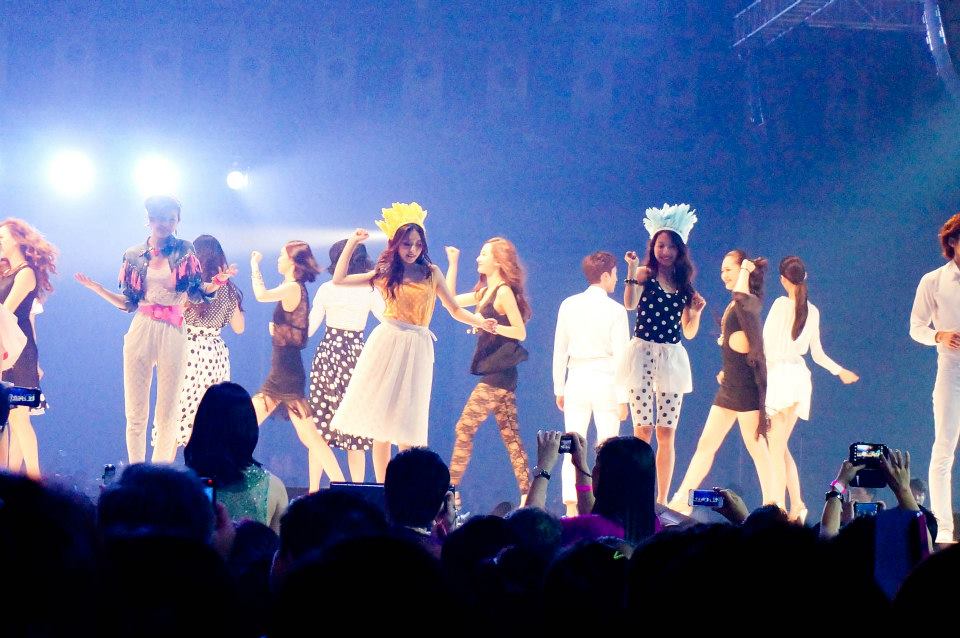 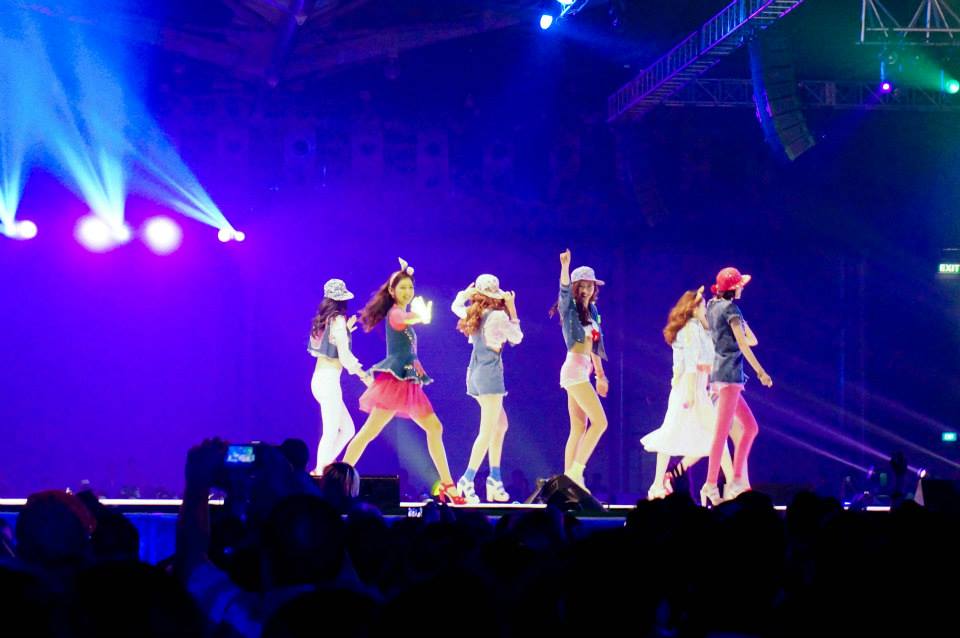 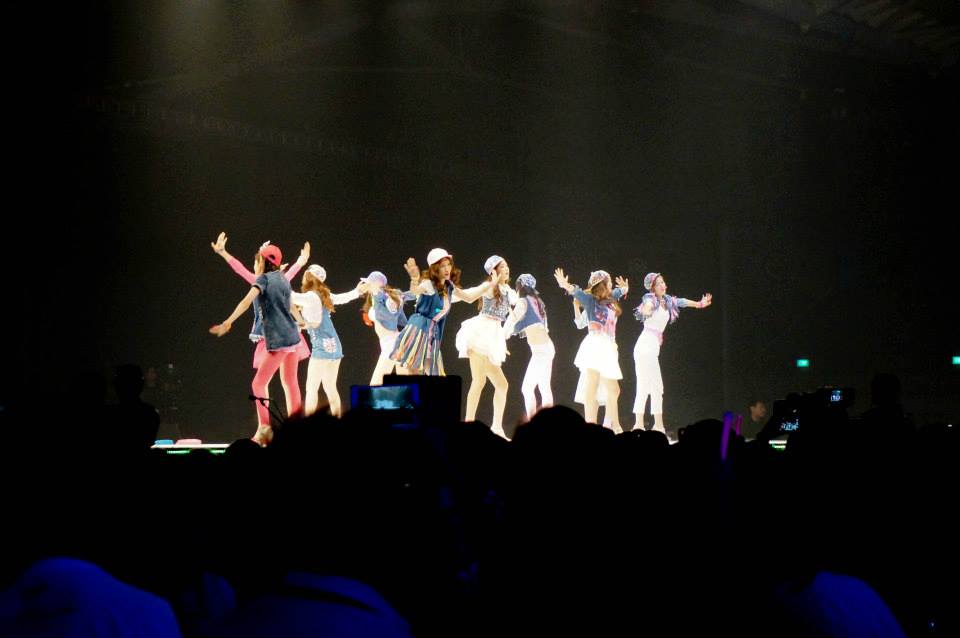 Asia Style Collection 2013 showcased designers and collections from Japan, Korea and Singapore, punctuated by performances from popular international groups like SNSD/AKB48/2NE1 and local talent The Sam Willows. I am so proud to say that Singapore really did hold it’s own against the two more mature markets of Japan and Korea in both fashion and music fronts, possibly im biased but i was really so pleasantly surprised. Japan had the cutest clothes, Korea was the most fun, but Singapore was the best pulled together in terms of presentation and smoothness (obviously) (home country pride) (#governmentgrants). I feel the need to talk a bit about korea first though, because I was just so intrigued by their segment.

Korean fashion shows are amazing. It’s my first ever korean fashion show and they’re an incredible amount of fun. It’s not just a runway walk, it’s a whole freaking performance for them. You have these amazingly goodlooking models strutting the catwalk, and then breaking out into dance. It’s so fun i was just giggling like an overexcited schoolgirl the entire way! I think the audience loved it so much in part because they picked the music so well- all the dances were relatively familiar even to a non-kpop fan like me- one of the fashion labels even got their models to dance a mash up of PSY’s Gentleman and some other popular korean song i’ve vaguely heard off my sister’s ipod.

And it’s not just fashion. They model and dance for everything– they had models prancing around onstage to promote Tony Moly make up, and various perfume and night cream brands. Seriously, only Korea. And of course the fangirls and boys went crazy when: 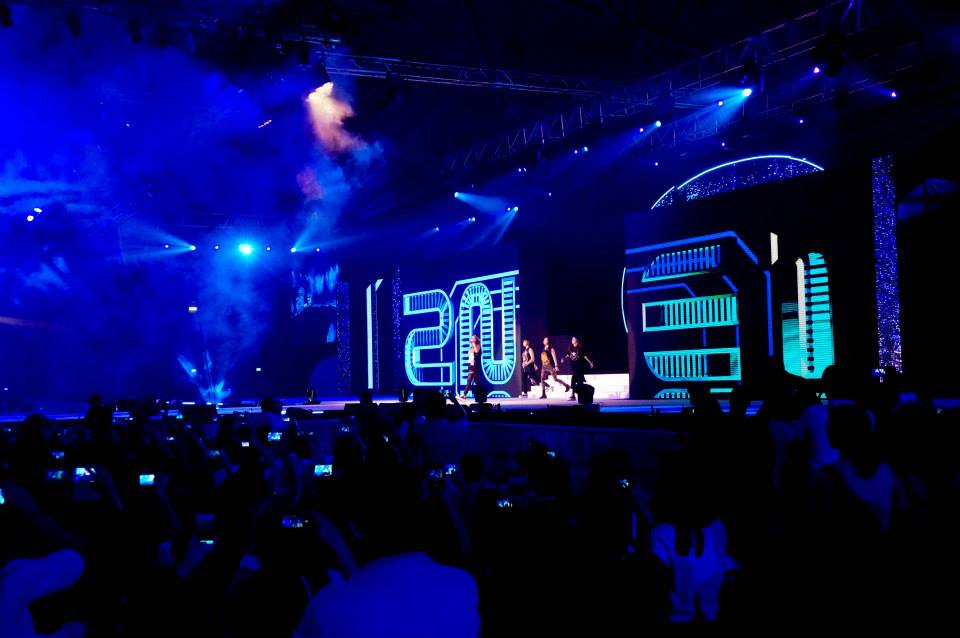 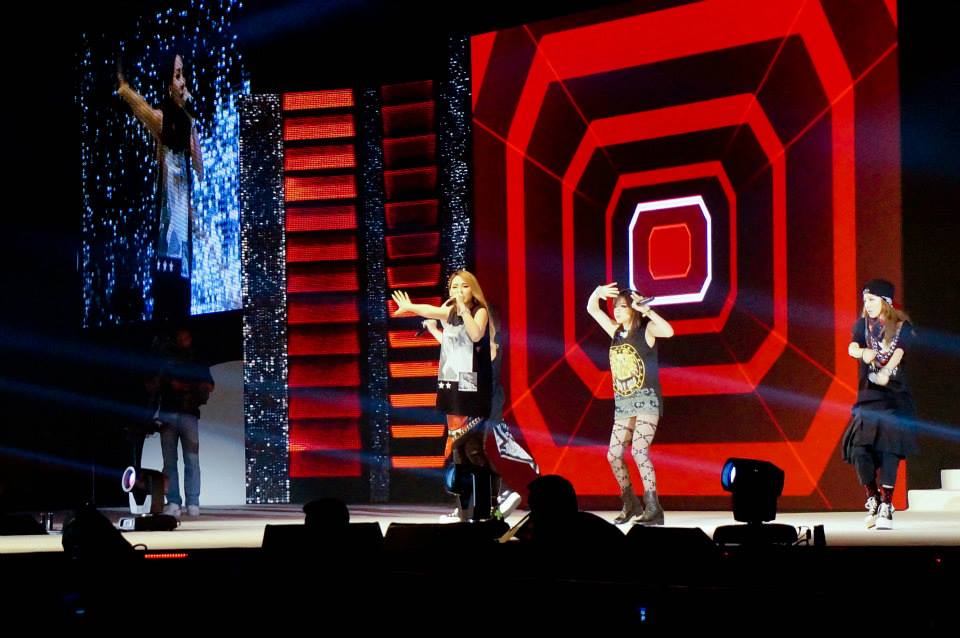 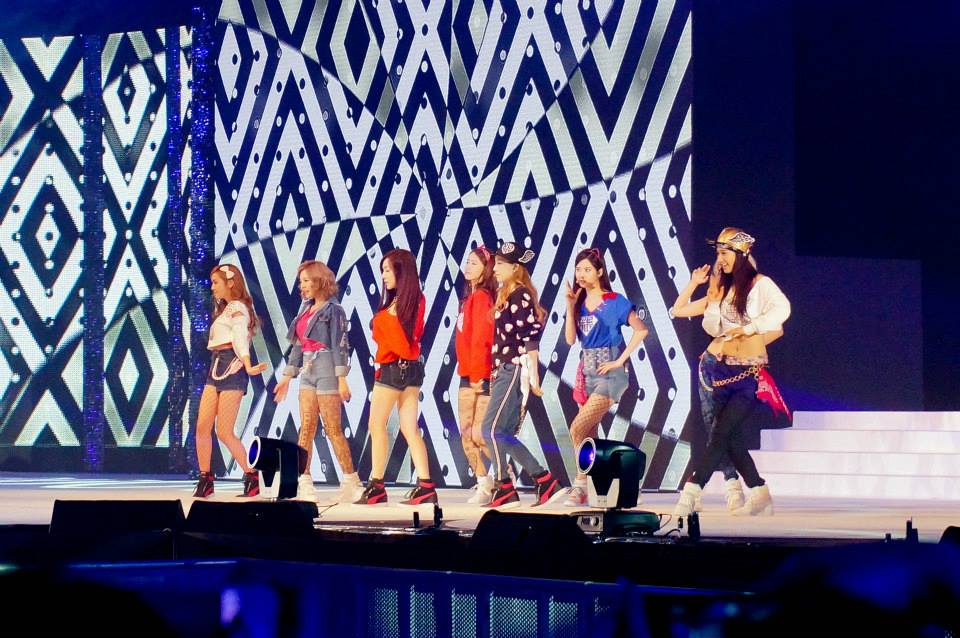 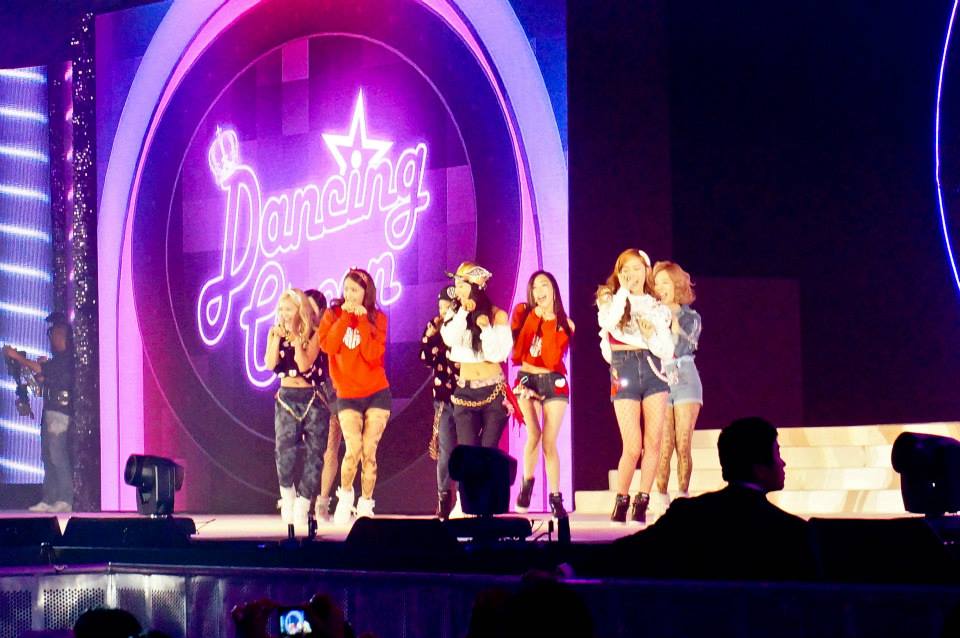 I mean, I’m not even a kpop fan but even I got way too overexcited at this. Memories of secondary school days listening to the insanely catchy Gee by SNSD. 2NE1 and SNSD both drew half-crazed responses from the audience, as expected, and wow this was also something like my first brush with a multitude of kpop fans all at once. Very smart performance selection though, with 2NE1 fulfilling the badass/feisty quota and Girls Generation being all girly and sweet and also massively popular. 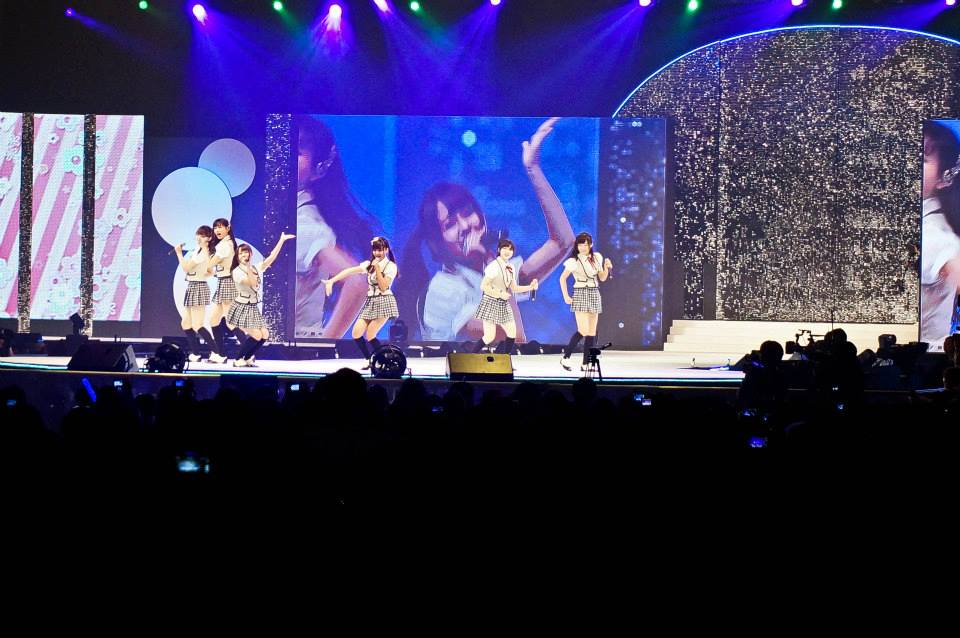 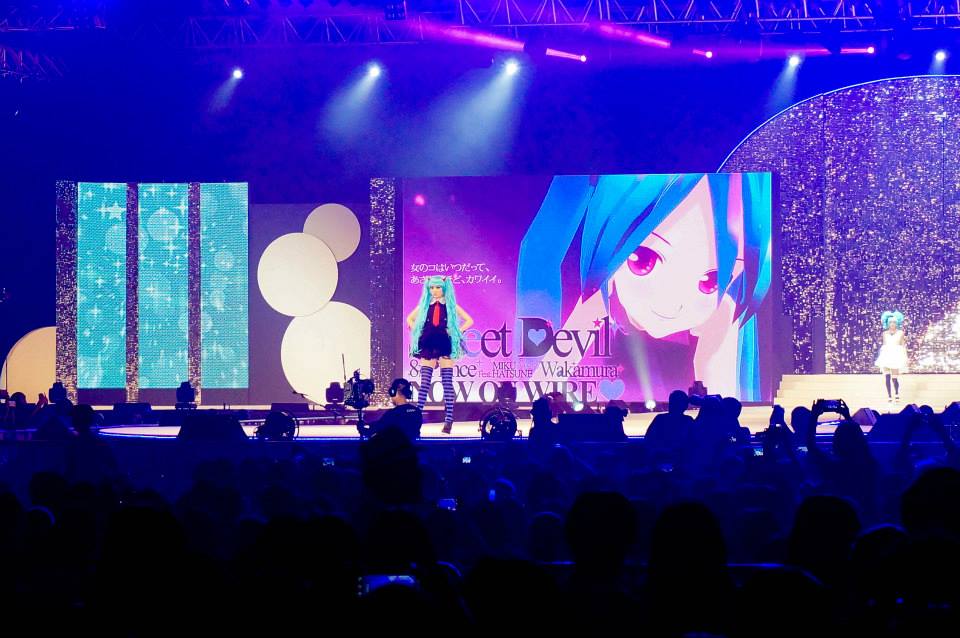 Here are a couple of shots from the Japan segment, which to be completely honest I wasnt that keen on. Possibly its got to do with being too cutesy for my taste, even though there were several collections and pieces that I did like. It goes without saying that all their models were ridiculously good looking, and I also really enjoyed the performance by this japanese pop singer Thelma Aoyama. I have to say that I think it’s really not easy performing for an audience unfamiliar with your music- it was obvious that all the japanese singers had great voices and talent but i think truth be told most of the audience didn’t recognize them/were there for SNSD lol so they were a little lackluster during the japanese performances. Which, come to think of it, must have been relatively offensive given that all these japanese singers are huge hits back in their home market. Thelma wasn’t just a great singer though, she was an amazing entertainer. She looked at us pointedly and went Ok you guys, usually i blog and i want to say that singapore was the bomb, but if you guys arent gonna cheer and stand up and dance im gonna have to say that it was… okay. Such brutal honesty. It was hilarious. I loved it. I googled, and you can read her blog here.. that is, if you can read japanese. 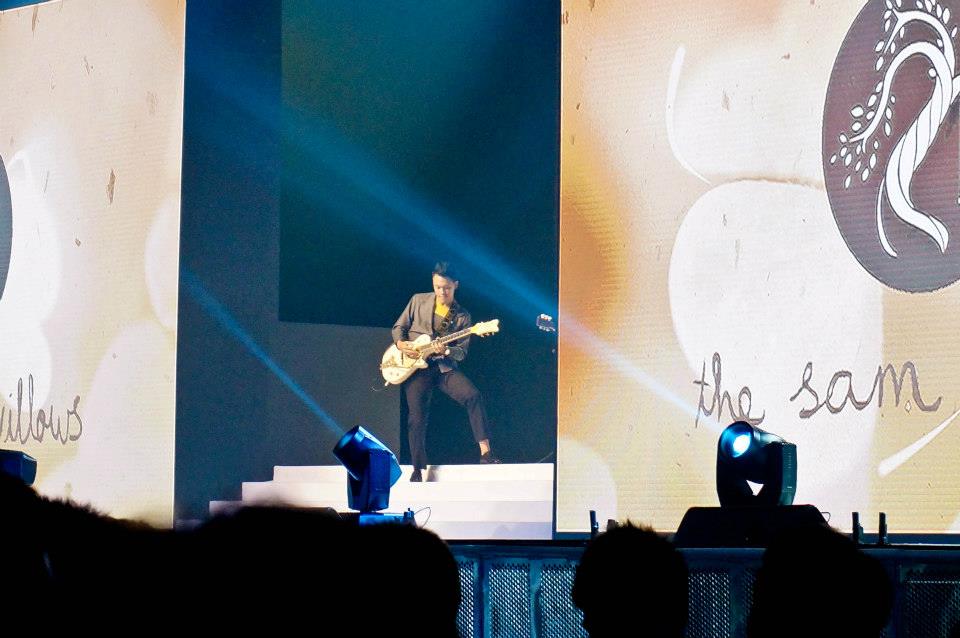 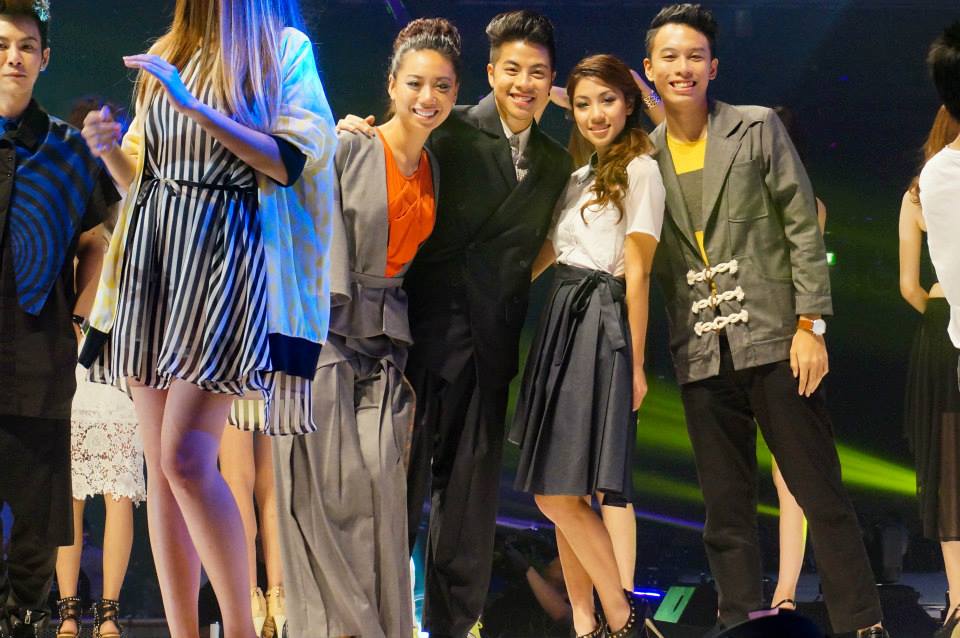 And here you have our local talent The Sam Willows, who opened for the singapore segment of ASC with a cover of Little Talks (i love this song omg I was so happy to hear it) and their new single Glasshouse. A completely different vibe from the more upbeat/cutesy Japan and Korea segments, the Singapore style segment featured local designers like Ong Shunmugam and Depression. Most of the collections were also modeled by gushcloud bloggers and mediacorp artistes, and of the lot I really have two things I’m dying to say:

1. Michelle Chong has a WINNING smile
and
2. Zoe Tay is a queen.

When Zoe Tay appeared onstage in a long white gown everyone just drew a collective breath. She didn’t even bother strutting or doing a catwalk, she just glided down the runway slowly because that is how queen she is. So regal, and so freaking beautiful despite her age. I really wanted to run up to her and give her a hug except I was intimidated by her beauty, also, security would have had my neck if i suddenly jumped onstage and I would never be invited to any media event again…. ever.

The singapore segment was just so sophisticated- i think that’s the word for it- and I was really impressed because we’re such a young market when it comes to these things, it seems like just yesterday policemen were wearing shorts, you know? Ok i mean that figuratively, i dont think i was born when they were still in shorts haha. But yes, we’ve had comparatively so much less time to grow our local music and fashion scene, and I think we really held our own so well in this collective showcase of Asia’s best styles.

All in all an incredible night, I came home and yelled I SAW SNSD to my sisters who both refused to talk to me afterwards. Thank you so much Gillian and Gushcloud for the invitations, we had an amazing time. All photos in this post taken with the Sony NEX 5R c/o Sony Singapore, so yes, thank you Sony x Waggener Edstrom too. x