Audiophiles, rejoice. This is something I’ve been mad excited over from slightly over a month back- the launch of Spotify Singapore. Okay, I’m slightly late in updating about it, it officially launched here April 16th. But! I’ve been raving over it on twitter and facebook, even if i hadn’t actually gotten down to writing a proper post on it. Ever since they announced their plans to expand into Asia last year, the entire net has abuzz in anticipation of Spotify’s Singapore launch- and for good reason, too. The Swedish commercial music streaming site has taken the world by storm, and is poised to revolutionize the way Singaporeans get their daily fix of music. It’s been my absolute best friend (Sorry, fred) this entire hell month, accompanying me right through sleepless nights of essay writing and exam revision, and I’m serious about this: everyone needs to download it stat.

Spotify in a Sentence:

A 2006 Swedish startup offering music streaming services, users have the option of either crafting their own playlists from the catalogue of over 20 million tracks, or discovering new songs via Spotify Radio.

They’ll deliver.
It’s not just empty hype. After approximately a month on Spotify Premium, I’m absolutely, incredibly, and irrevocably hooked. There is something incredibly therapeutic about surrendering your audio autonomy to Spotify while you go about your daily activities, be it reading or working. Ever since my initial brush with Spotify, I’ve all but completely abandoned my iTunes in favor of Spotify’s desktop client. It’s also a huge plus point in an increasingly cloud based world- audiophiles will love the fact that they’ll have the option of streaming their music fix in high definition from a cloud-based app rather than actually going through the hassle of downloading and purchasing tracks- freeing up precious storage space on computers and mobile devices.

It’ll be your best friend.
They get social. Like other cloud based hit services (think Evernote), Spotify is available across all your devices. You can literally take it everywhere with you- it syncs across your desktop, whether you’re on Mac, Windows, or Linux, to all your devices. Available on Blackberry, iOS, Android, and Windows Phone amongst others, users have the option of taking their music offline as well with the Premium accounts. 3G failing you in train tunnels? No problem. At work with no access to your personal music library? Just sign in to your Spotify account on your work computer. There’s even the option of syncing your iPods to Spotify Desktop on premium mode so you don’t have to drain your smartphone batteries to feed your music addiction. And like all best friends, it’s not just comfortingly familiar, it enriches your life too. Spotify Radio crafts playlists for you based on genre, mood, or artists, making every sign in a cacophonous opportunity to discover new music. 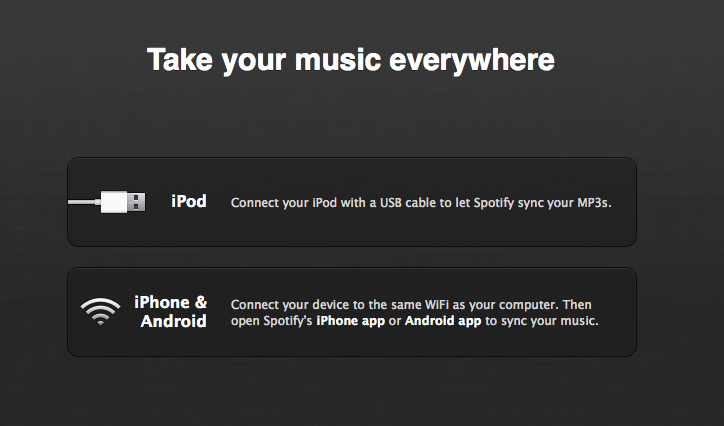 It’s not just about the music.
This may seem ironic, but there’s so much more to Spotify than simply music streaming. Like on any other social media community, you can build up your own profile, add friends and create collaborative music playlists with them, or stalk other users and pass judgement on their music tastes. But beyond this, all users have the option of following their favorite artistes or music stations, and be updated immediately via email or in-app notifications whenever new songs are released. In a world where updates are king, this makes Spotify incredibly appealing. Knowing about Bruno Mars’ new song before everyone else does? Yes please. The great thing about the service is, all these other neat features don’t detract users from it’s primary purpose- on the contrary, they complement and work towards reinforcing the appeal of Spotify as the choice music service above all others. Sweet.

Here’s what one of the playlists I’m following looks like: 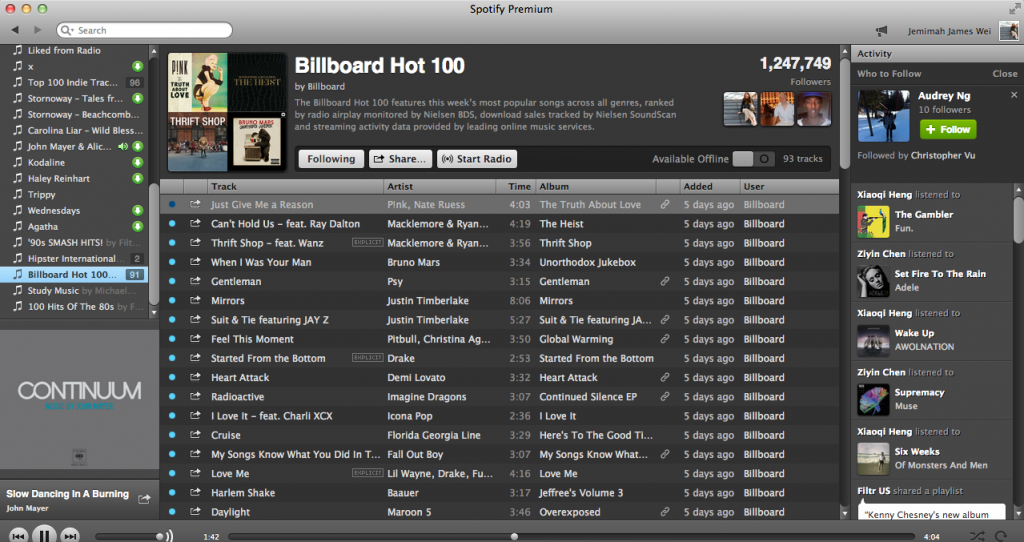 The most standard- Billboard’s top 100 hits. Because I’m someone who has never had a device that can access the radio, i NEVER know what anyone else is talking about when they start humming the latest ditty from the airwaves or whatever. It took me like five months after every one else to discover who Katy Perry was back in secondary school. Yeah, well, now I do. I’m totez updated on all the music and whatever is new and all that, thanks.

On the left you can also see a bunch of my own personal playlists- it really works like itunes, except much, much better. (I may be biased, but whatever.) & on the right, something like the Facebook ticker- you can see what your friends are listening to and what your bands are saying or something like that. 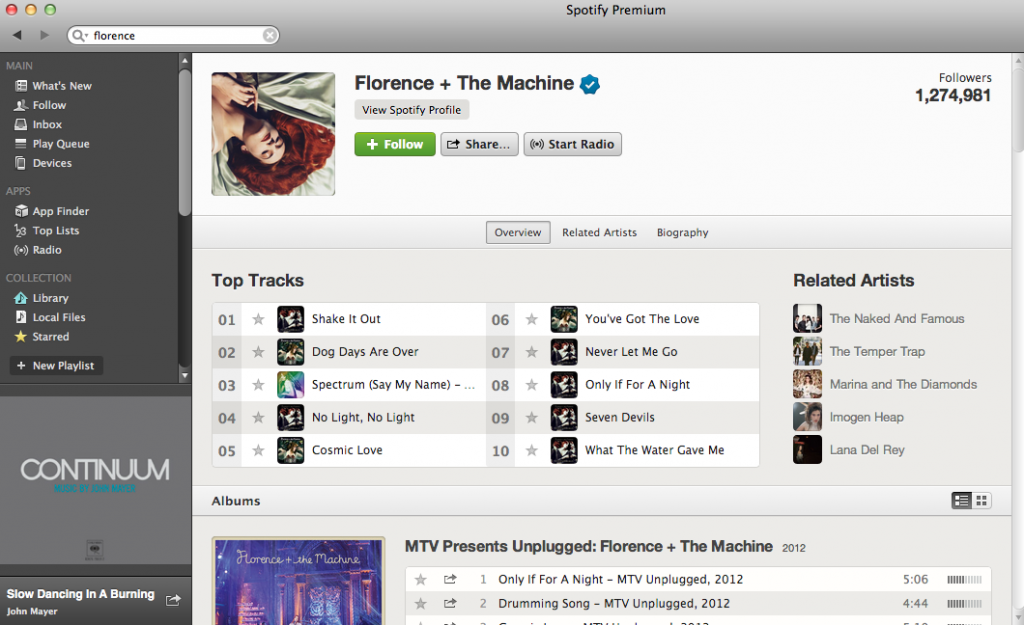 By far my favorite function: the ability to pull up artists and listen to their entire discography. The nights i’ve had having John Mayer concerts in my room! I’ve been through nearly all his live tours now. Oh, my heart. How is this even legal? I dont know, but I’m not complaining. 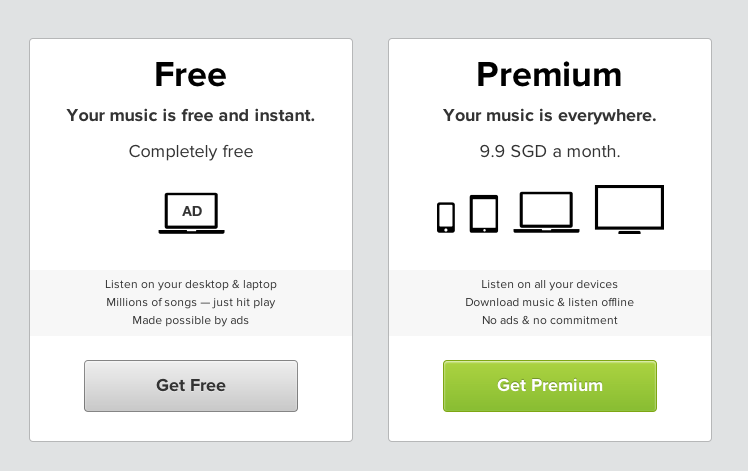 Ok so anyway, Spotify runs on two modes- free and premium. The free version is ad supported, which means you get hit by a narrative ad every few songs. I guess it’s a bit like listening to the radio and getting the DJ’s voice instead of the music, i dont know. When I was in the US I used the ad-supported version and it seemed rather ok, but I’ve been using the premium version back home and it’s so freaking awesome I don’t think I’m ever going to go back to the free mode! You can basically sync it to your iPods and handphones, and you get to skip tracks unlimited-ly (from my 8tracks experience this is really important hahaha), and you can also download your playlists so you can listen to them offline!! Now you get why I’ve not touched itunes in forever, yes? Besides, it’s only about ten bucks a month, which is basically a lunch. Recommended: yes, yes and yes.

One of the best things to happen to me this half a year I am thinking. Download it here.

Thank you so, so much Spotify x Lewis PR!