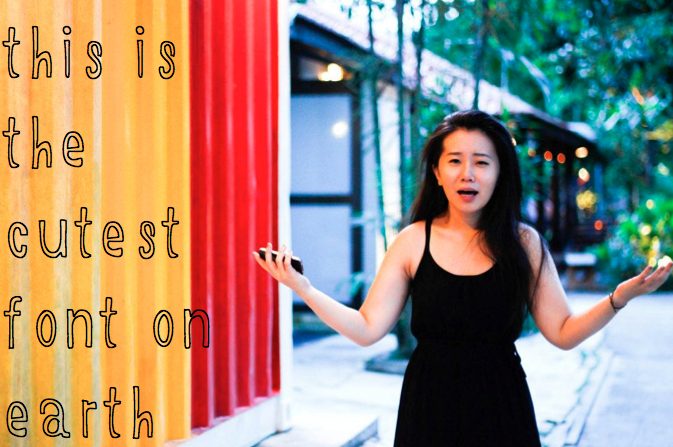 I’ve been staring at words non-stop for the past couple of weeks- it’s really either reading or writing now, and a heck load of either anyway. I feel like my entire life can be basically whittled down to conversations regarding either of the two. Short stories galore and I might or might not post up a few pieces I’ve written over the course of the semester, depending on how self conscious i get, i dont know. In any case I thought this might be interesting and/or useful for some of you guys – I remember always finding myself wondering how people found pretty fonts when I was younger: I mean, I know Arial and Times New Roman, and when I discovered Helvetica I thought I was set for life. But no. Anyway over the past year or so I’ve found and downloaded a whole bunch of fonts because university life = presentations and an unprecedented surge in the use of microsoft powerpoint. Here are two I particularly like:

1. Hero Light
A solid rounded typeface which works great for minimalistic headings without having to succumb to the likes of Century Gothic (which in all fairness, i do like too.) It’s the thin version of the standard Hero font, and can be downloaded here.

2. Love Love
I love this!!! It’s so adorable, also, it’s the kind of handwriting I always wanted but never managed to perfect. I read about it off A Beautiful Mess, which was recently featured in Designeditor, and it’s actually created off this ipad application which allows you to create your own fonts based on your handwriting. I’d totally do it, except my handwriting in real life sucks. Which is why I ended up blogging. Because I get to hide behind typefaces. Ah well. You can read about it and download the font here.

Ok yeah so these are the two I wanted to share- I actually have a whole collection of fonts but if I start listing every single one I think it’d just be a bit confusing and annoying. Also since I’m talking about fonts you know I’m running out of things in real life to talk about.

Next up: the weather.