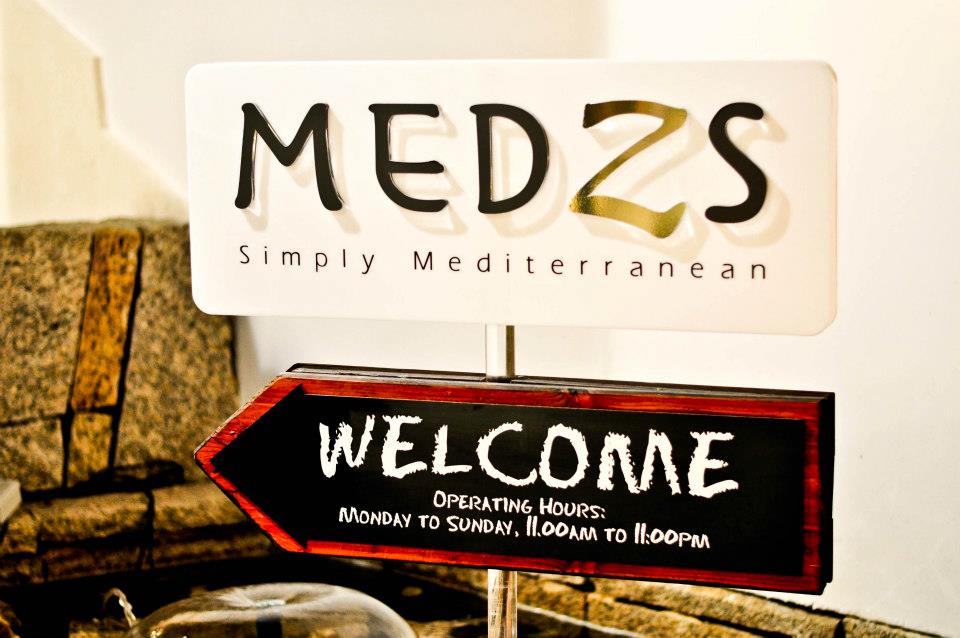 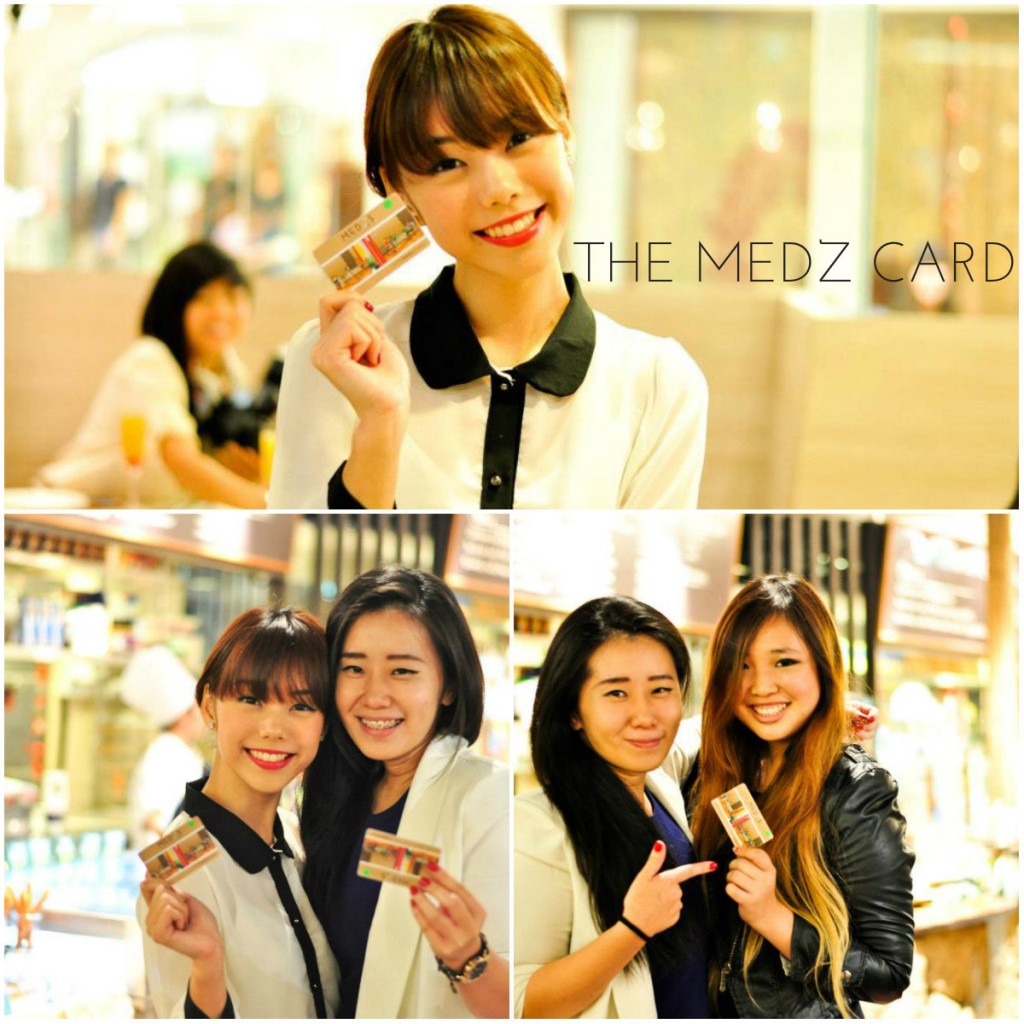 What a great and much needed break from hell month, you guys.
Last night, MEDZ invited a few of us down for their Mother’s Day menu preview/ food tasting session- for those of you who don’t know, MEDZ is a sweet mache-style restaurant located at the Orchard Central basement. It’s got eight gourmet stations offering Spanish, Moroccan, French, Turkish, Greek and Mediterranean cuisine- you pay by MEDZ card credit (pictured above) and then cash it out later at the counter when exiting. I came a year or so back with Christel when they first opened and remember being pretty impressed by their cheese and wine platter / rosti, so I had pretty high hopes for this dinner! Also, after a week straight of food out of NTU’s Canteen A, I was pretty much like O.K. LETS GO.

Oh and if you were wondering about the title: 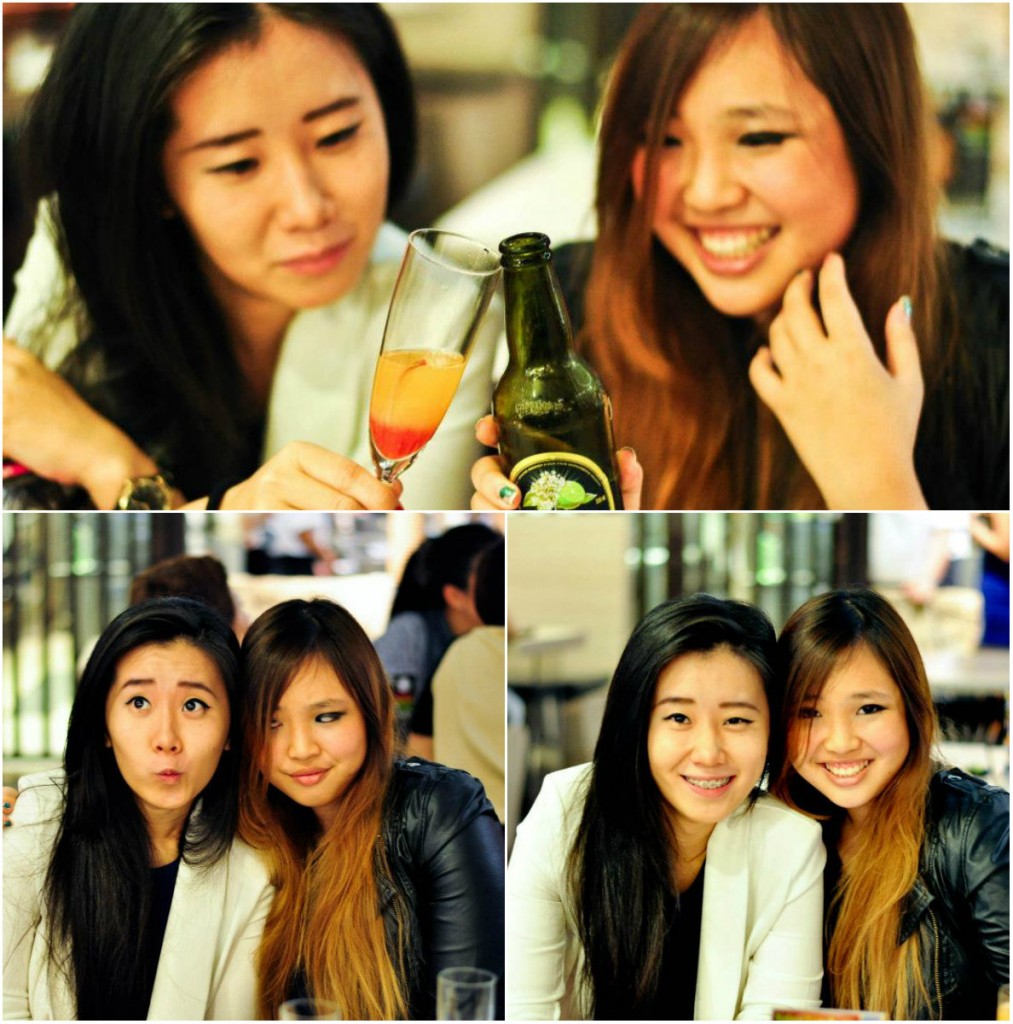 macham wedding shot am i right.
(As a side note, I’m holding a bottle of Kopparberg Cider; elderflower and lime. So good.) 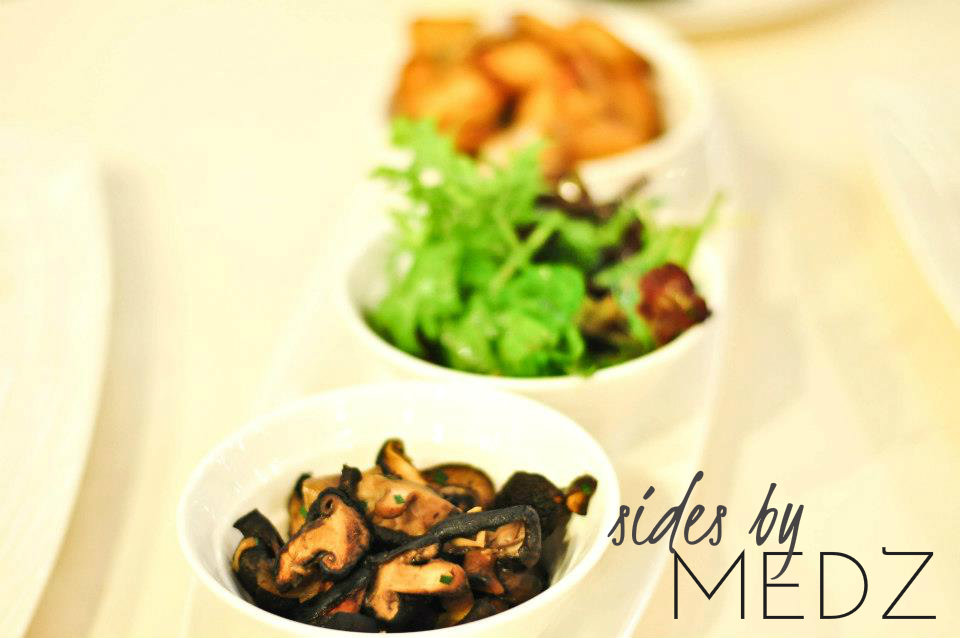 A picture of the most heavenly sides. Admittedly, I didn’t try them all- i’m not a fan of eggplant and mushrooms, but of those i did try, the mashed potato, salad, and truffle dipped bruschetta was delicious. In fact, all of the potato dishes I tried were great- there was also another side of diced roasted potatoes that came later on with the meat platter. 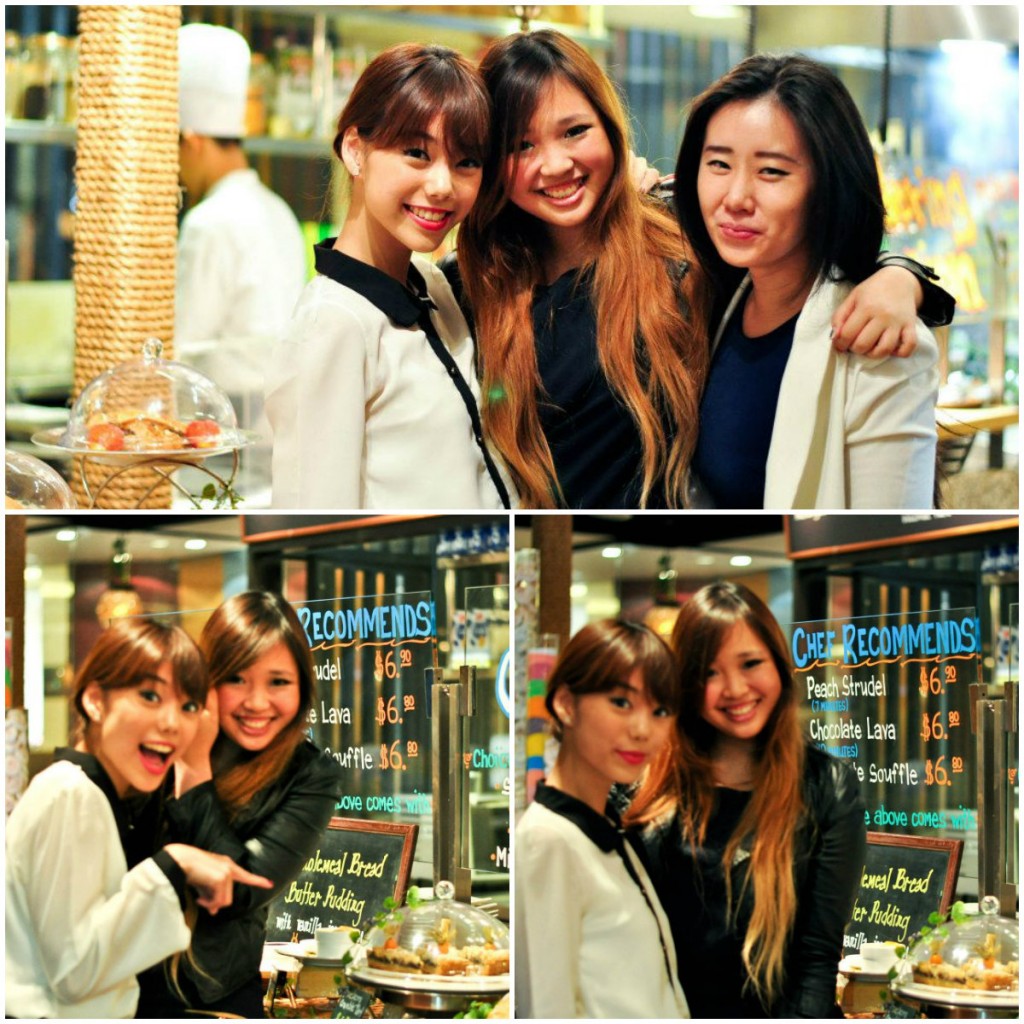 Strutting around MEDZ like what, up. O.k. im just kidding we were just surveying the food choices and trying to pick a juice flavor. They’ve got a pretty sweet spread of detoxifying juices, which is great for the health conscious. Most popular flavors being the Melon Melody (lol so cute) and the Super Anti-Oxidant. You can also get your fruits in smoothie-form. Other drinks that are good include their frappe section (i also tried a mocha caramel iced blended coffee, yum) and their extensive cider/beer selection. You’ve got to ask the drink dude for recommendations- that’s what we did, and he recommended the delicious cider i mentioned above. 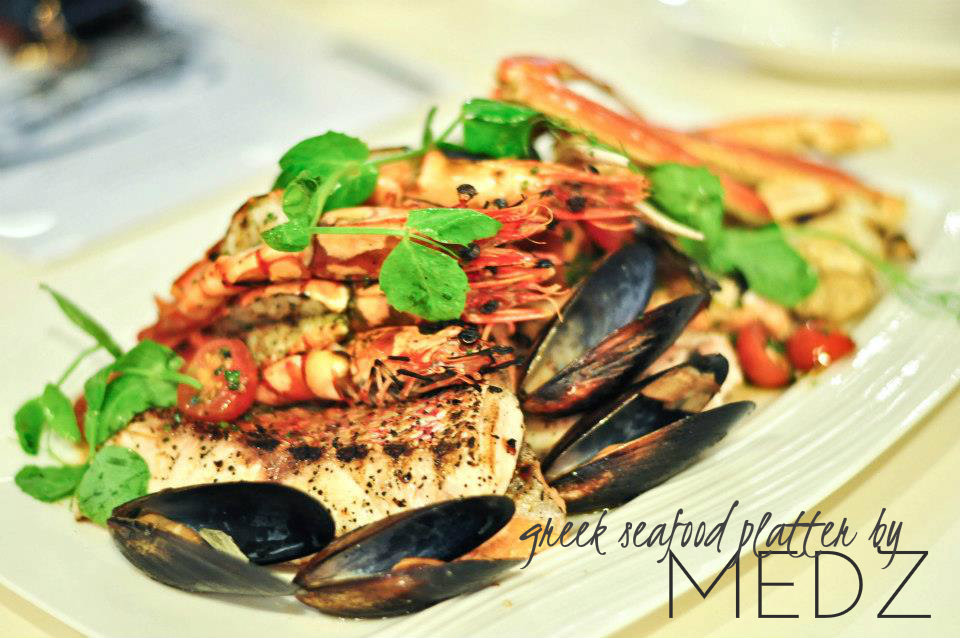 The Greek XXL Seafood Platter ($49.80) – butter grilled king crab, salmon head, sea bass, sea bream, snapper, blue mussels and fresh live prawns. It was insane. There were seven people at our table and it was enough to go around. I particularly love the salmon, because between salmon and anything else i will always pick salmon, but wait! Listen! I’m not just being biased because it’s salmon. They’re very particular about the quality of their food, and apparently it’s the season for salmon now, so they brought in the salmon head for this month only. And for sure, it’s one of the better takes on cooked salmon i’ve had. I couldnt stop sneaking bits of it onto my plate. Recommended: definitely. 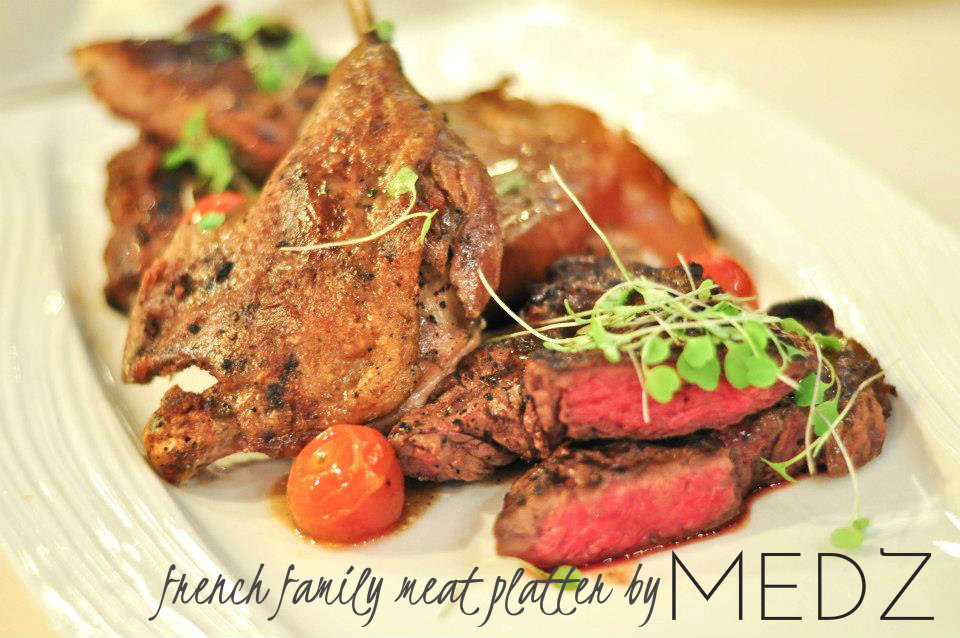 French Family Meat Platter ($48.80) – pan-fried duck confit, crispy pork belly, AUS Wagyu beef rump, roasted pork ribs with roasted wild mushrooms and roasted potatoes. I didn’t try any of this, because I’m pescetarian, but the rest who did try it gave special mention to the duck confit and pork ribs which were apparently spectacular. 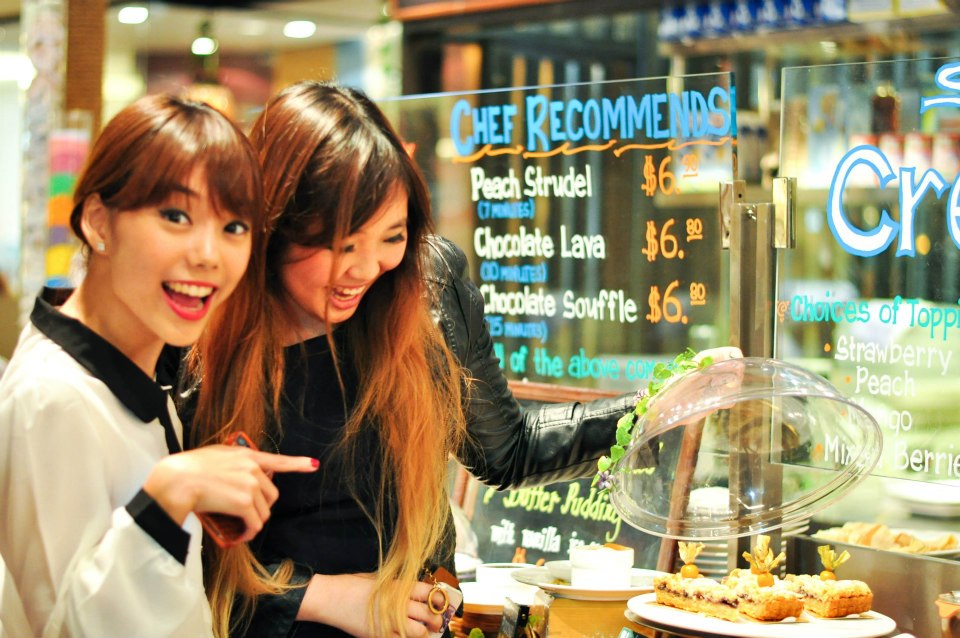 Messing around with the desserts. Can I just say? I love the decoration and concept of MEDZ. I know quite a few places do this, but check out the cute CHEF RECOMMENDS section scrawled on in colored pastel markers on the glass! So much cuter than a menu can I get a hell yes. They also use chalkboards and the like for their menu items over normal printed menus. I don’t know, it’s so trivial but I have a weakness for things like that. And the layout of the place is just so.. vibrant. 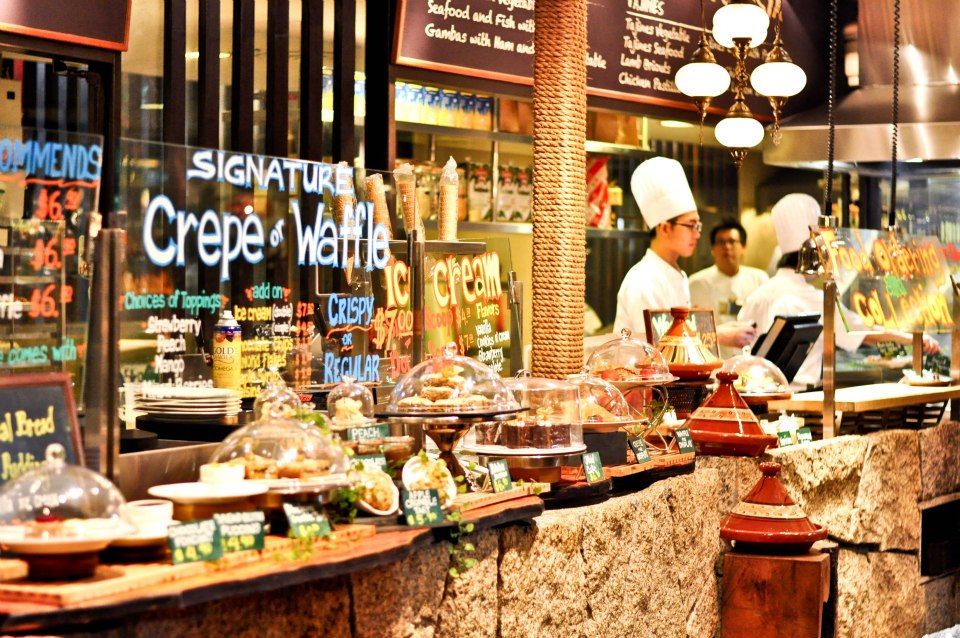 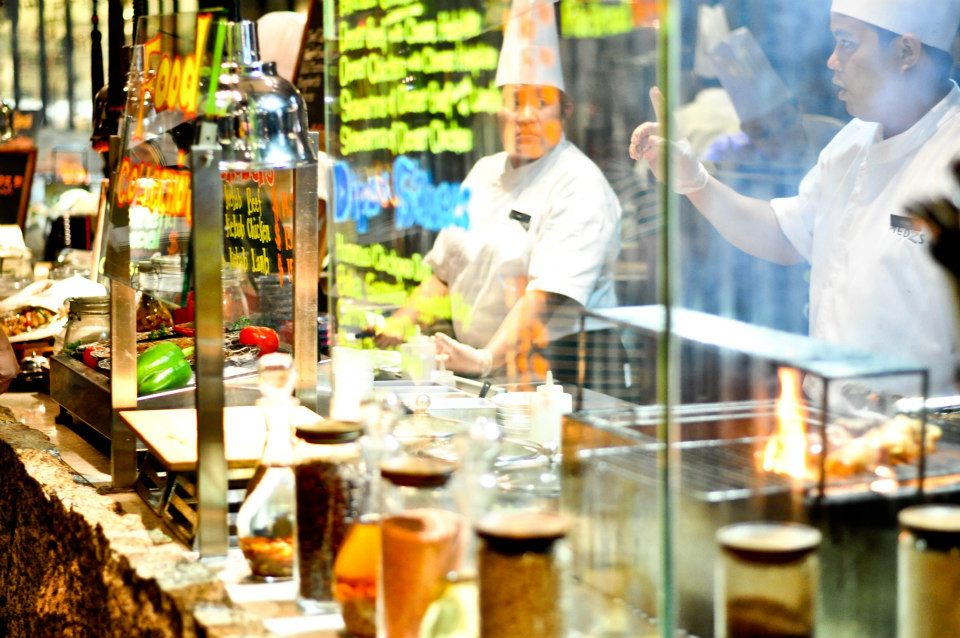 Basically the food is segmented into different stalls and you order from wherever then pay at the end of everything. The concept is nothing new, I mentioned this in my opening paragraph, but it just feels like air conditioned upscaled street food. I mean this in the best way possible. Walking down choosing dinner I feel like I’m laughing and sampling food from a row of brightly lit sparkling stalls at night in an Asian destination, face tilted up to catch the cold, wrapped up in a jacket. It’s so idealized isn’t it, I’m painting such a rosy picture and romanticizing the whole dinner experience. But it’s true. My idea of a dream holiday has always been frolicking down night streets in Taiwan, Hong Kong, Korea, wherever, along rows of stalls. It’s an ideal that has been perpetuated and reinforced by years of Asian adolescent tv dramas, and it’s the reason why I love walking along pasar malams even if i dont actually buy anything. What are we all buying into but a grand narrative at the end of the day? What I’m saying is, it’s silly, but that’s how I felt when I was walking down the rows of stalls in MEDZ. Like I was on holiday.

Oh my goodness how I have digressed. Here we are at dessert: 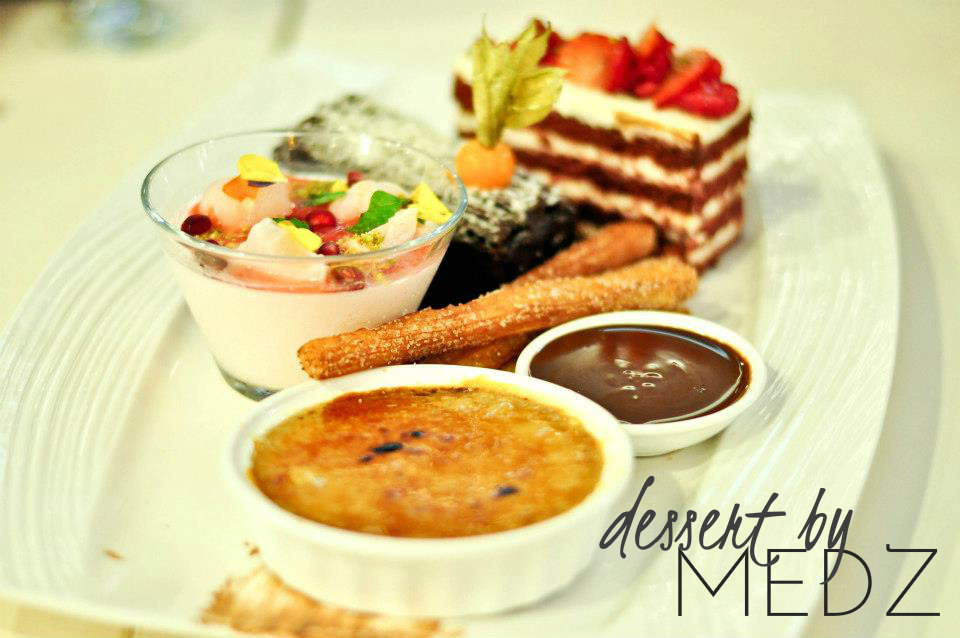 And are you dying right now, because I am. Andrea took one look at me and went: there’s no way dessert can ever go wrong. Mind you, we were stuffed by now. But everyone knows you have a completely separate appetite component for dessert. It’s like, the laws of human biology or something.

Churros!!!! I get so excited over these things. It’s like biting into Universal Studios. Or street food in New York. Where else do they sell Churros? Not enough places, is the answer. I can’t believe I’m launching into a mini tirade on these things but they’re so good! The MEDZ one is great, i was so worried before they served it because I’ve had one too many experiences with soggy or weird churros from other places, and I assume theyre one of those desserts that are just kind of tricky to get right. But these are amazing, I assure you.

Also, please observe: it’s not just creme brulee. It’s earl grey creme brulee. Hm. Who would have known. They actually make a pretty good marriage. If you’re coming here with family or a bunch of friends, you should definitely get the dessert platter. I mean, with the other two you may have people who don’t eat certain kinds of seafood or meat, but everyone likes dessert right? Testify! And they’re so delicious if you have like five friends it’s totally worth it since you get such great variety and it’s not that expensive.

Ok i need to shut up about the desserts. What fashion? I am putting the Fattening in That F Word. No, shut up, only I’m allowed to make fun of myself. Other things we tried include the Rosti, which is as always, delicious. 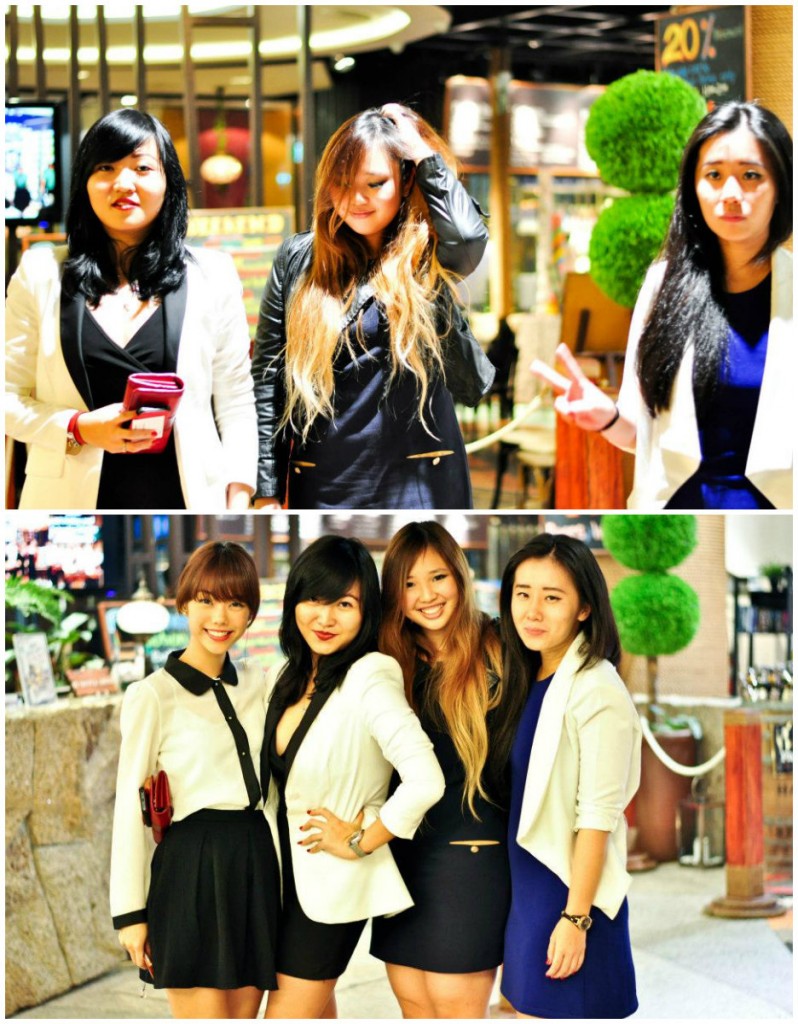 Christel joined us later on, so here’s a picture of the four of us. I don’t see enough of Christel as it is, so it was sweet that we got to catch up, even if it was only for a while.

Completely stuffed by the end of the night- but no one’s complaining. I highly suspect my slightly off the charts excitement about the night was fueled by the intense studying I’ve been drowning in for the past, idk, month? Either way, it was a great dinner, and a fantastic break.

Thanks so much for the invitation, MEDZ x Brand Cellar!

PS.
Here are a few shots of Cindy and I being silly after dinner: 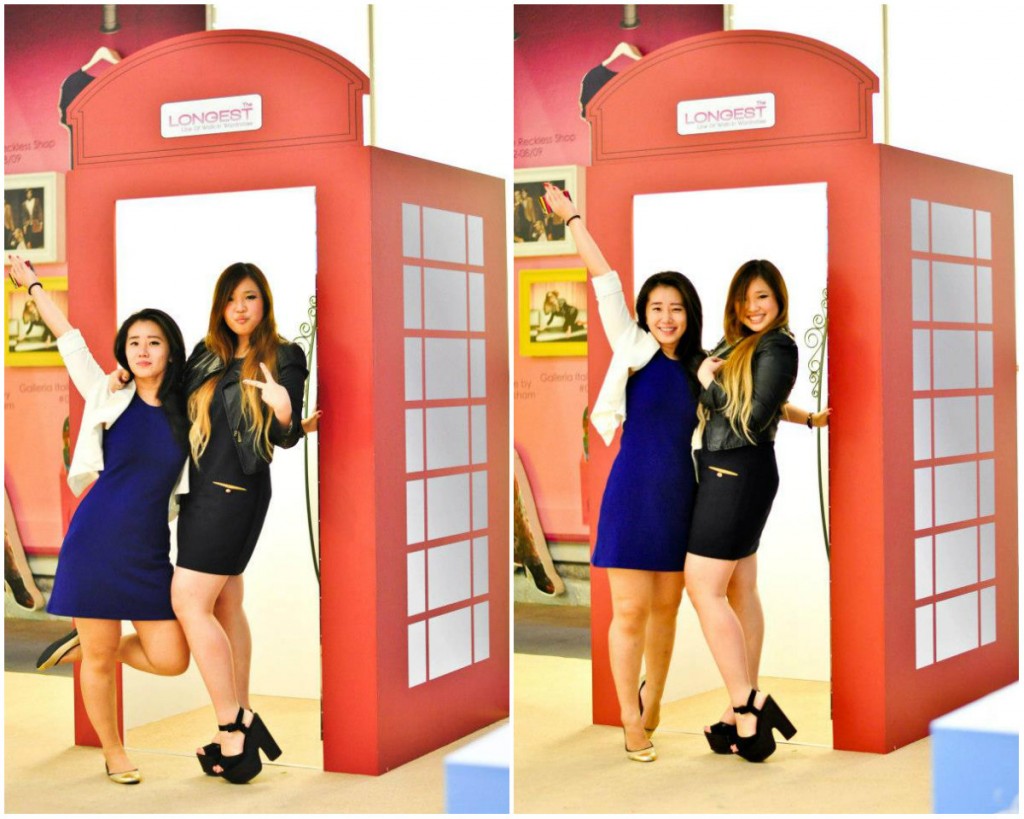 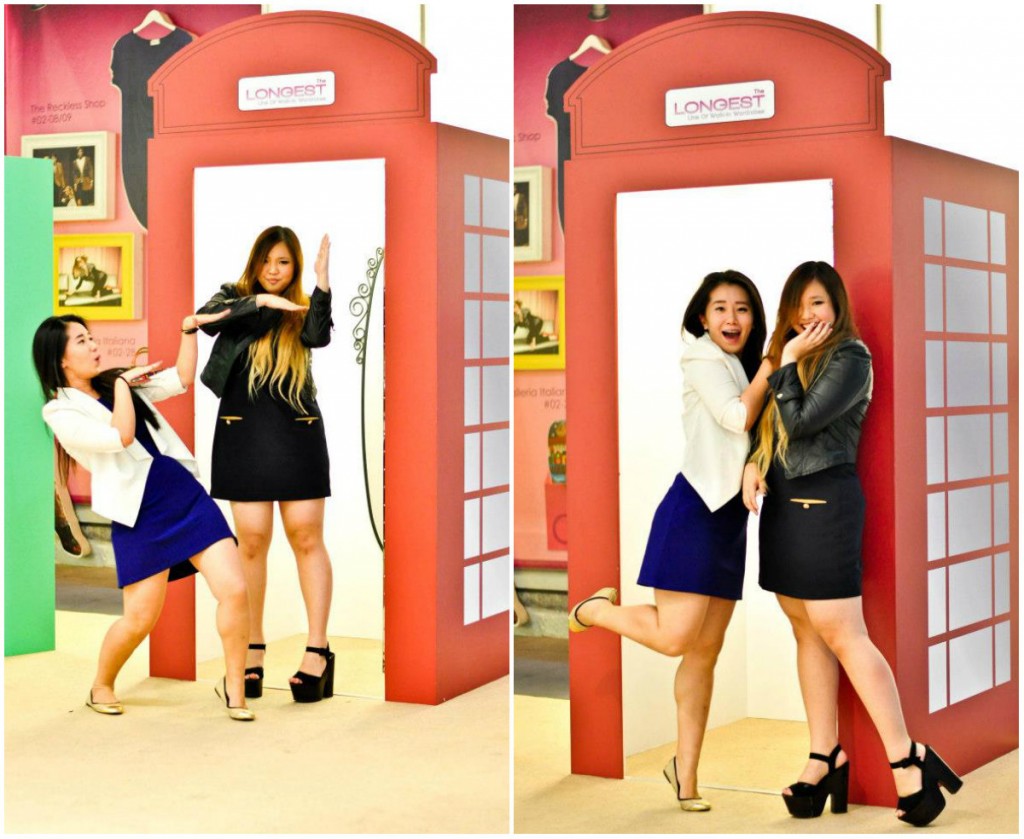 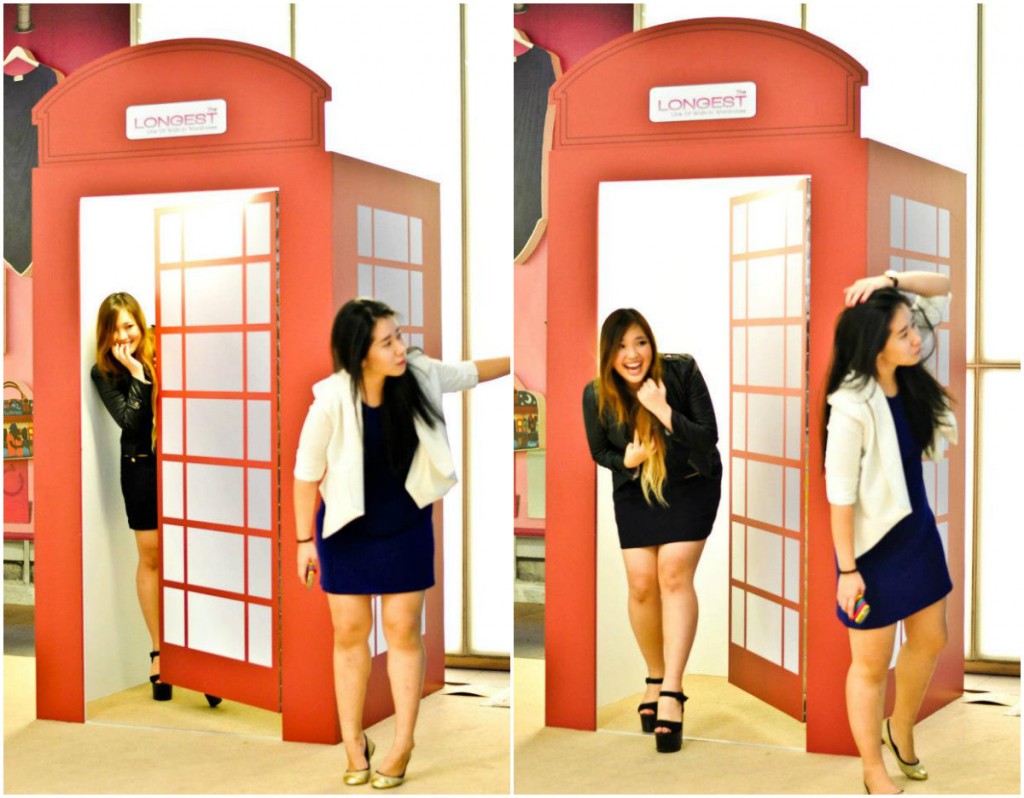 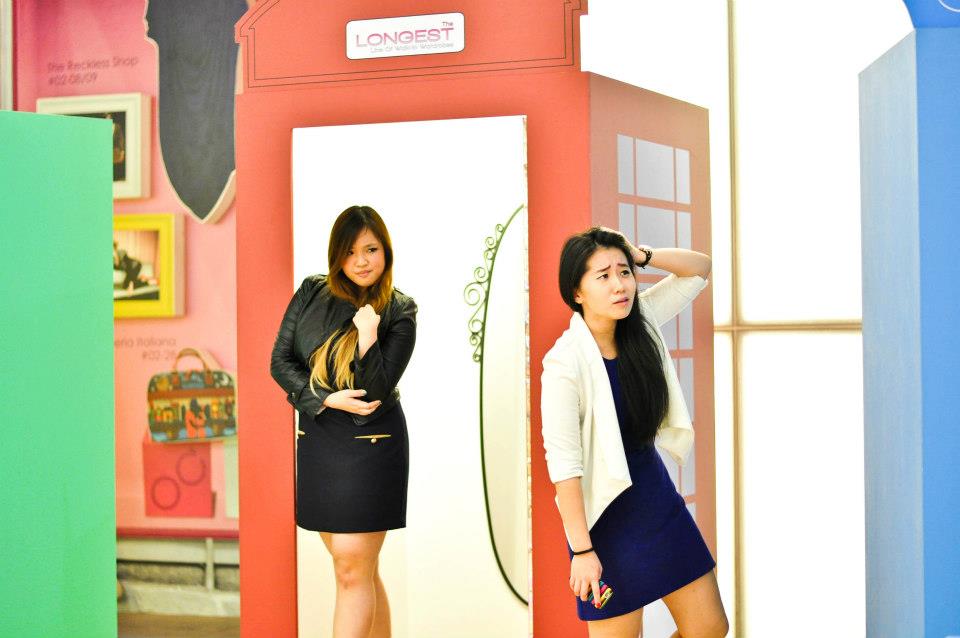 And here’s a picture of Chong being beautiful. 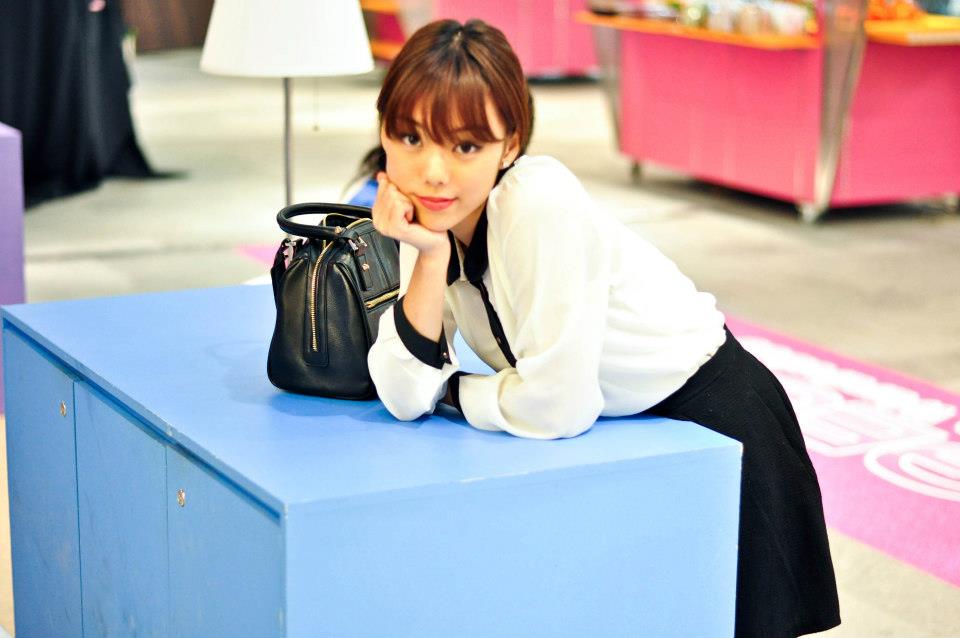 Have a great weekend, you guys.