The first thing you should know about me is, I grew up with boys. Backstory: my mum and her two best friends decided to get pregnant together, not creepy at all, moving on. The fact that I grew up thinking I was a boy doesn’t seem to help explain anything about who I am today – to all means and purposes I am la femme through and through, except for the fact that I don’t seem to have had any of the essential girly experiences little girls used to have. To be sure, my childhood seems more a blur of hot wheels and batman than anything else, and I’d never even sniffed nail polish till I was fifteen. It doesn’t bug me at all, but I bring it up because what it does is explain why and how I react to certain situations, like sleepovers, manicures and Mean Girls.

Recently, Kao’s Liese sent me a throughly girly hamper of roses, pastel pink hair accessories, and Liese’s Jewel Pink bubble hair dye. Now, most of you already know that my hair is kissed and contracted to Urbanhair, which I absolutely love, and I’m not going near my own hair with anything more permanent than intensive color care conditioner. On the other hand, I’m also fully aware that college undergrads and younger (as most of you are) probably wont have the time or energy to keep visiting the salon and DIY-dyes are probably the next best option, so Lex and I are going to do a step by step on how to DIY dye your own mane!

I got way too excited about this. 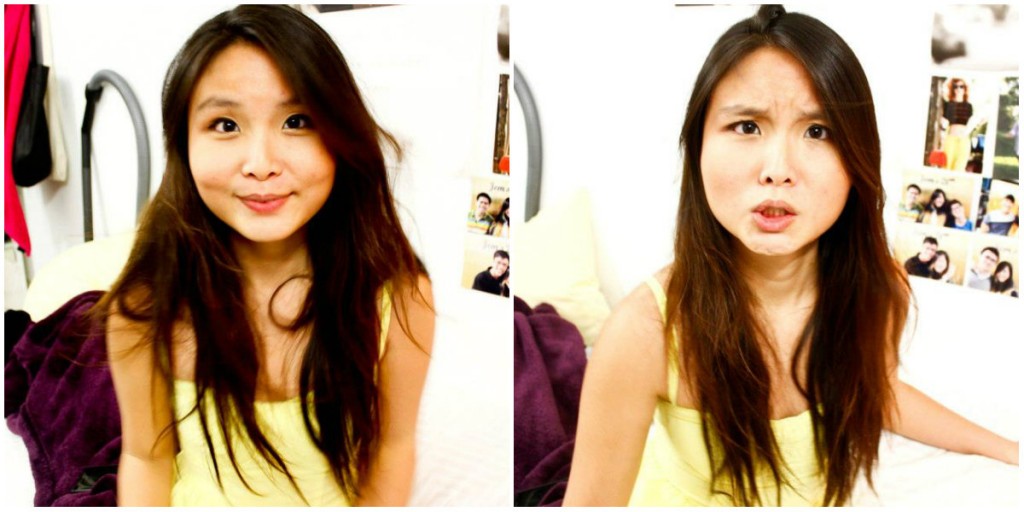 Here’s Lex with her original hair color and length. Take note of the length- we only used one box for it, so if you’ve got a similar hair length i guess you only need one box.

Ok we’re going to be using the Kao Liese’s new Jewel Pink bubble hair dye. It sounds like a full head of cotton candy but it really means “Shiny Brown with a touch of pink” as advertised on the box. Ref. above for a pic of the contents of the box. 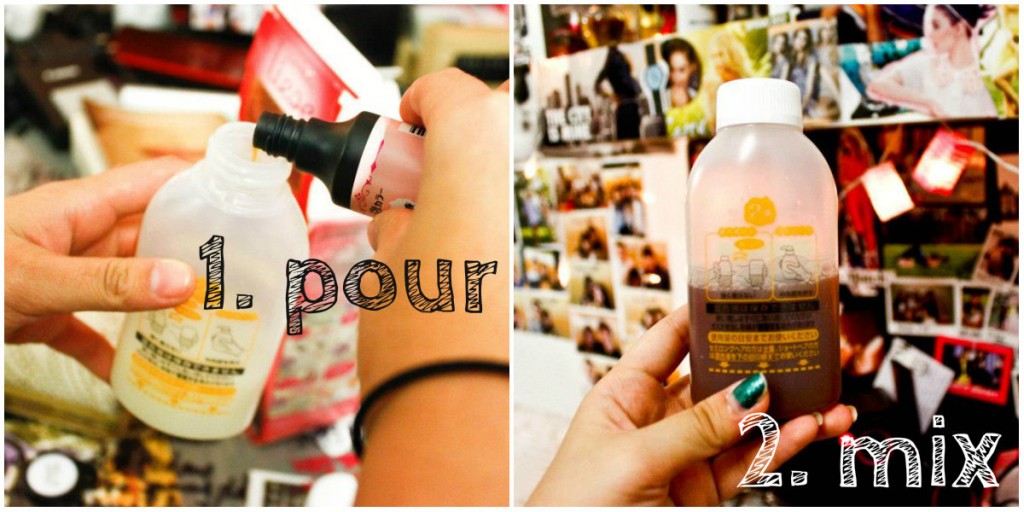 Ok this is easy enough. Pour the liquid from the smaller bottle to the bigger one and shake it gently. I dont know why it doesnt just come premixed, probably because the chemicals will react negatively if it’s already premixed, but since I’m a literature major I’ll tell you it’s to maintain the illusion that we’re actually actively doing something instead of just letting the color continue to happen to our hair. Pick whichever rocks your boat. 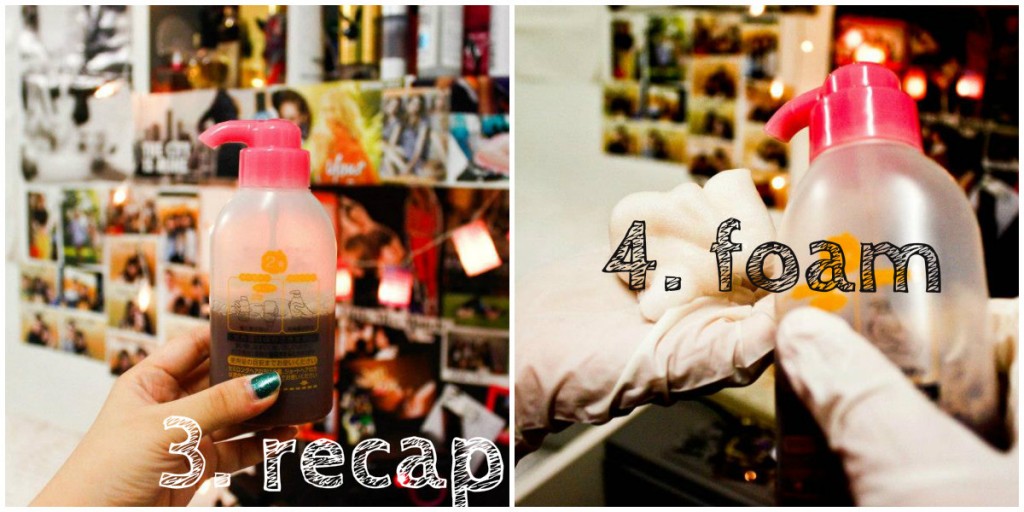 Replace the cap of the bottle with the pink squeezy thingy that comes in the box. This leads you right to step four, FOAM. I expected it to squirt everywhere, but if you squeeze the bottle body the foam just gently oozes out everywhere! Oh yeah, and remember to wear the gloves (included in the box) + wrap yourself in a towel so you don’t dirty your clothes. 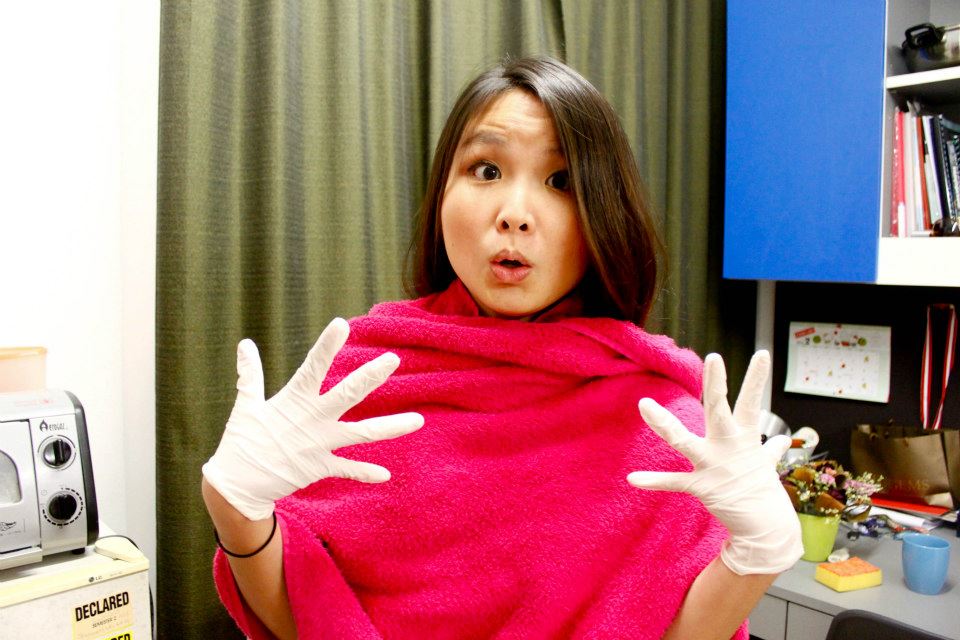 There we go. The next part is easy enough. You just need to squish all the foam all over your head and massage it in gently with your gloved fingertips. The bottle looks tiny but it surprisingly produce an immense amount of foam.

She evidently had a lot of fun with the foam. Thankfully it didn’t degenerate into a bubble foam fight because 1. it was my room and i’d have to clean up and 2. it’s dye, man. that shit stains. 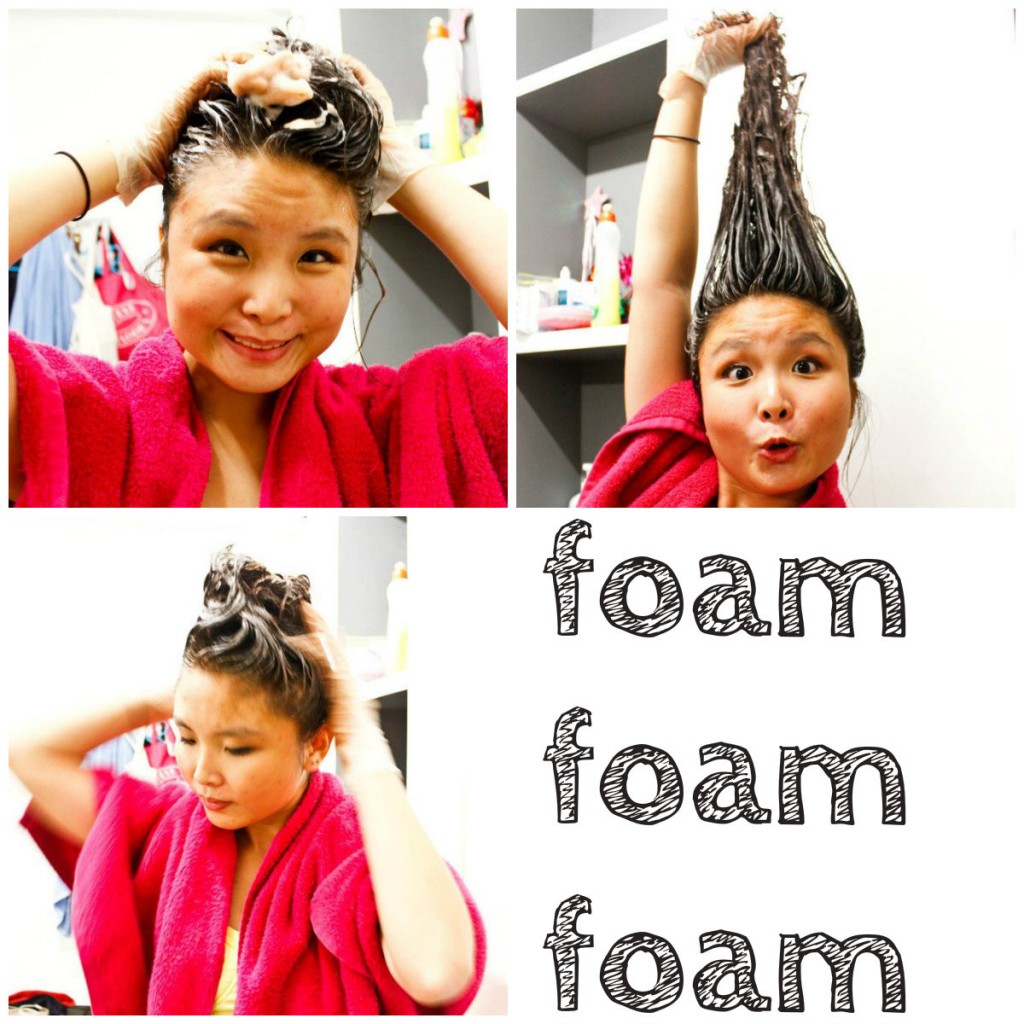 It just went on and on and on. It was like the foam never ended. Remember to massage it to the bottom of your scalp too so you get a more even color! When you’ve finished working it into your hair, leave it there to soak. The box said 20-30 minutes but we left it in for an hour and a half because everyone knows box directions are just guidelines, and anyway it’s better to be safe than sorry. 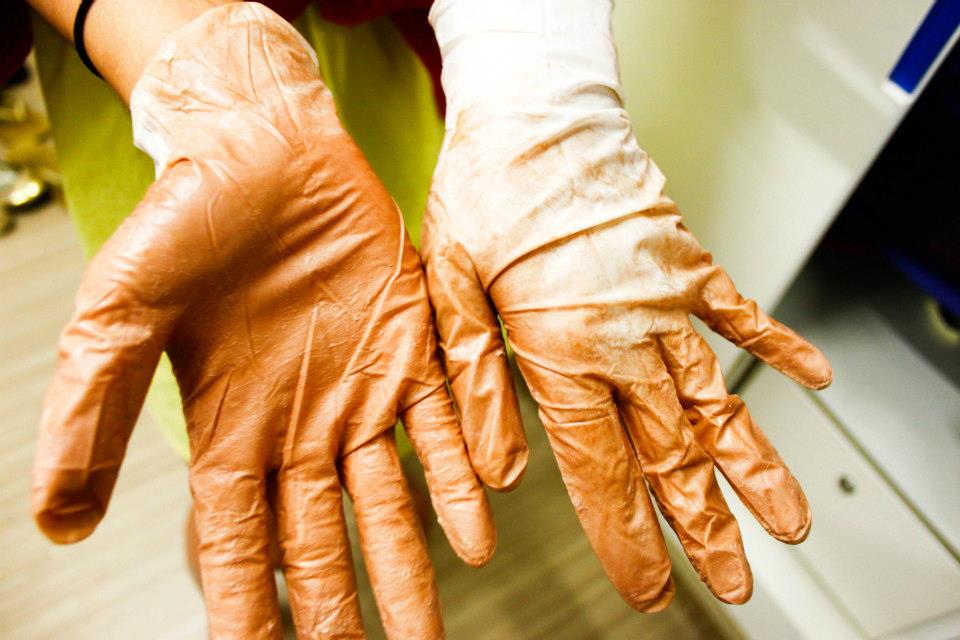 Check it out guys- see what i mean about dye staining stuff? This is why the towel is necessary.

Fun fact: did you know that when you stick dye in your hair it starts hardening like a metapod? I most certainly didn’t, it being my first time DIY-ing hair for anyone. By virtue of it’s nature it also becomes extremely malleable, which led to a series of really weird photos taken while waiting for the dye to set… 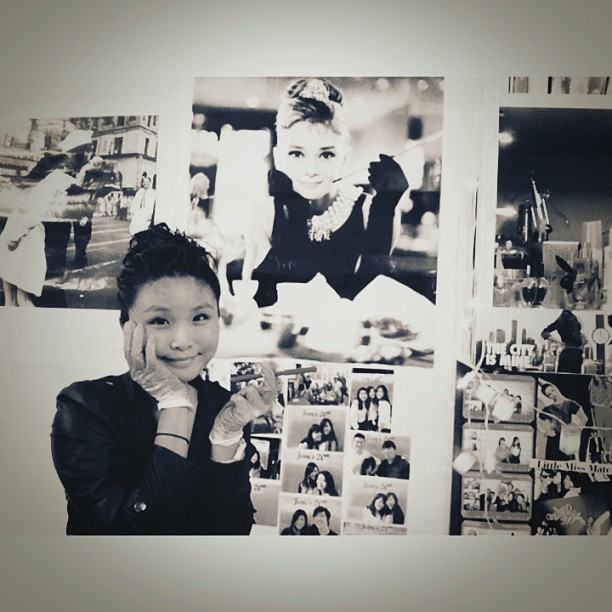 From Rihanna to Gaga to Hepburn. Ah well.

Finally at about 12:30am, we washed out the dye and conditioned it with the treatment that came with the box. Back in the room and I thought to myself ‘note beautician as possible career options if education fails me’ as I blow-dried and curled her hair. 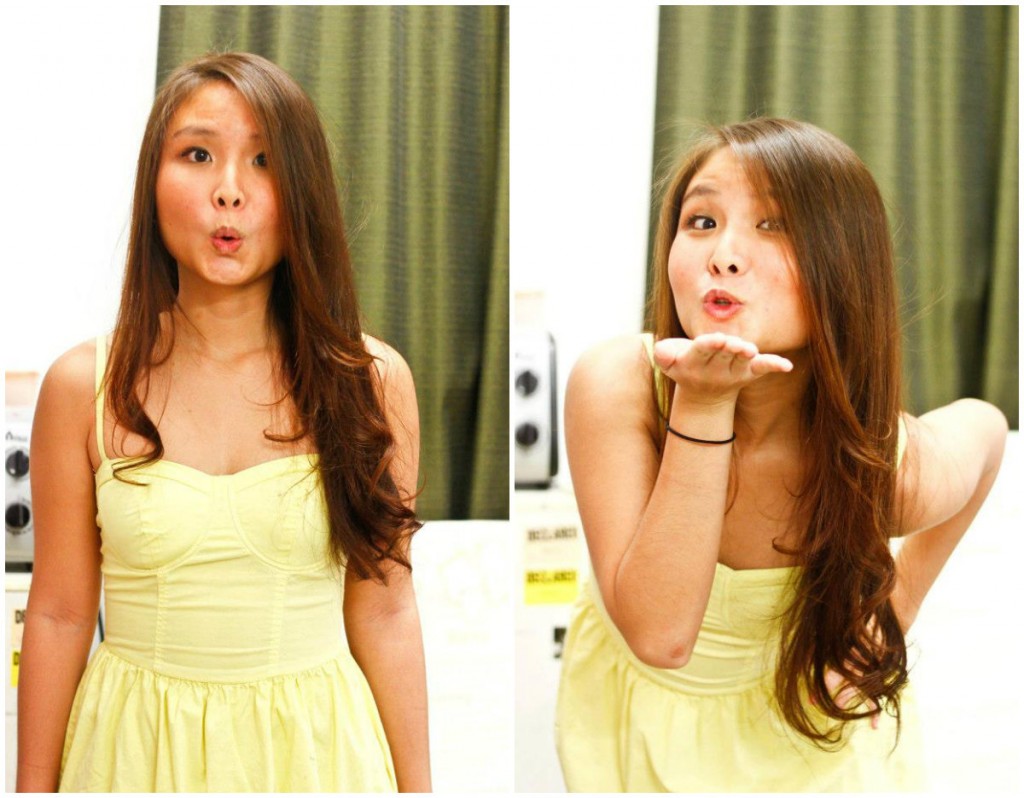 Sexy Lexy in Jewel Pink! Ok la shiny brown with a touch of pink. I don’t know where their touch of pink comes from but maybe it’s all in the undertones or something. 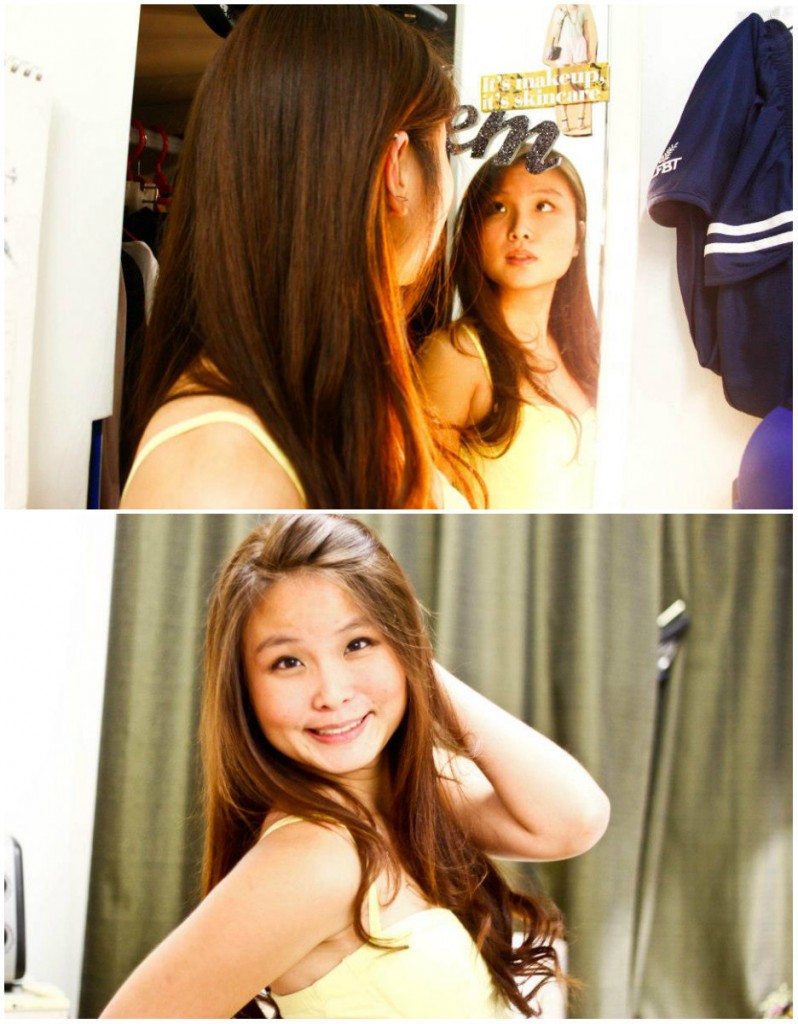 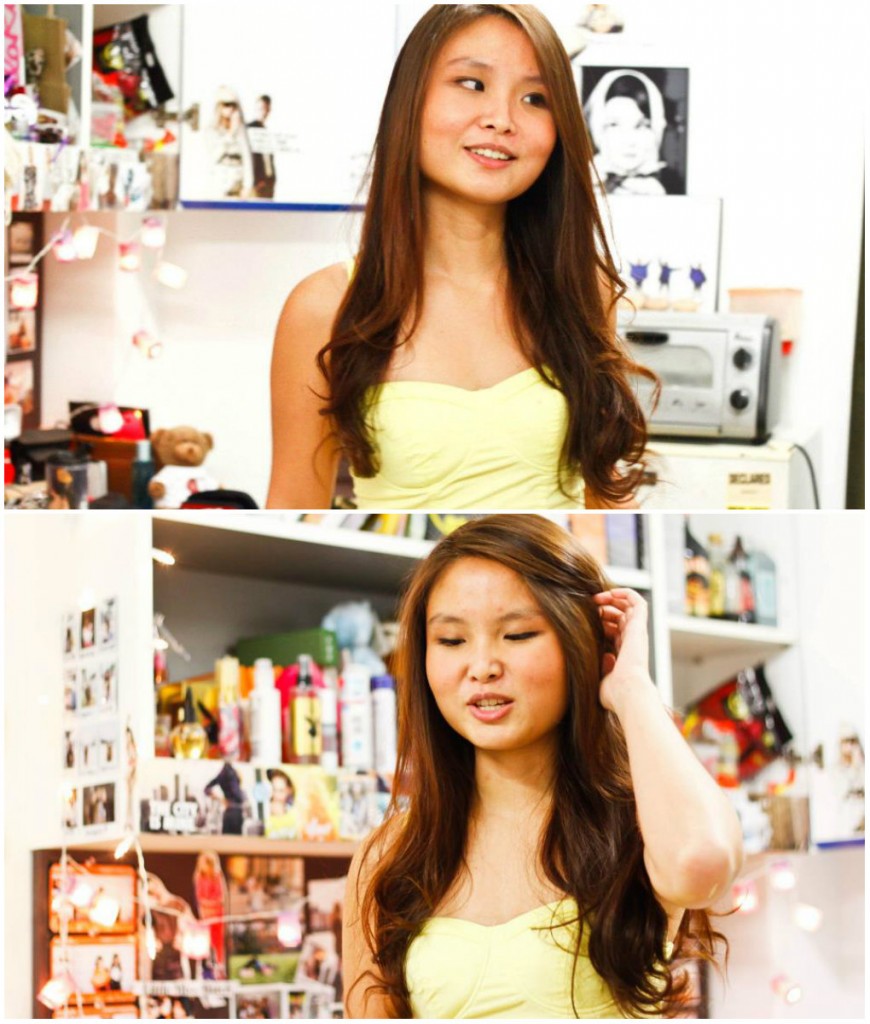 Is it just me or does she look like some kpop star? Alright, maybe I’m biased. But to me she just screams OHAI JUST SMILING AT MY ADORING FANS EVERYWHERE. I love!!

The entire experience was just so insanely girly, (remember: i never did these girly sleepovers growing up) and i felt as though maybe we should have made popcorn and painted each others toenails then watched Mean Girls or something. The whole time i was yelling OMG THIS IS THE KIND OF CRAZY SHIT YOU ONLY DO IN COLLEGE which is true, it is, because when else do you spontaneously decide to dye your hair in the middle of the night? There you go.

The dye is incredibly easy to use, all bubbles and foam. It’s the first time I’m actively helping someone use a DIY kit, but according to my other friends normally hair kits require lots of careful steps like sectioning your hair and combing it through with some dye brush thing and etcetera etcetera. This is insanely simple in a just whack and wash kinda way, and I can imagine that it’d be really popular with the hoards of kids having their summer break soon/ those looking for an affordable coloring option if they only have a month or two of break. If I’m not wrong, it’s retailing at about 19.90$ at Guardian/Watsons/wherever people normally buy their hair dyes.

Alright, that’s about it. I hope this is useful for you guys! Let me know if you try it and like it/ have any color recommendations for other people who’d be interested in bubblin their hair. Thanks so much Liese- totally livin the college life of makeovers and girly sleepovers x