Judge me all you want, guys, but i’ve just spent the last few hours of my life listening to the likes of Justin Bieber and Katy Perry on repeat. I do have some form of explanation for this though- I’m writing a paper for one of my modules HL2036 Virgins and Vixens aka. slut talk 101 and a large part of it is the trivialization of women in pop culture today. As a side effect I have been telling everyone that i have money in my bank that i’d really like to blow (swag, swag, swag) on you, something something eating fondue, because as sexist as the song is, it is just damn catchy, which can be rather annoying. Really though, you get to decide if the biebs is the virgin or the vixen.

I was thinking about misogynistic pop culture tropes earlier, and once you start thinking about it the number of sexist statements floating around out there that consistently reinforce the subscription to a culture that trivializes women is just rather ridiculous. On a loosely related note, i know that i’ve posted this before, but how awesome is this Marina cover of Bieber’s Boyfriend?

Now compare that to this:

I love how she subtly changed the phrasing of the lyrics to subvert the sexist message of the original song. Not saying that her cover is completely empowering and etcetera but it’s a refreshing take on the original. I generally try to avoid labels (like feminist, for one) because i think it packages unnecessary baggage like standard behavioral expectations and stereotypical views on certain issues, also because people expect a certain reaction to things within structured labels, and i want to have the freedom to say aww! when watching exaggerated love dramas without people gasping at me in horror because mass media’s portrayal of modern romance offends feminist morals or something. With that said- I’m honestly contemplating posting my paper up here once i’m done with it because, i dont know, i want to tell you guys to please read a book because intellect is the new sexy as opposed to what the Billboard Top 100 is pushing. Would it be something you guys might be interested to read, let me know.

Between this and the fact that i am slowly but surely knocking things off my to-do list, i’m honestly feeling like i’m compartmentalizing and pulling my life together somehow. Yes i validate my existence via the number of ticks i have off my to do list, go ahead and laugh. I also somehow found a precious two hours to spend with a group of friends i dont see enough of as it is over the weekend: 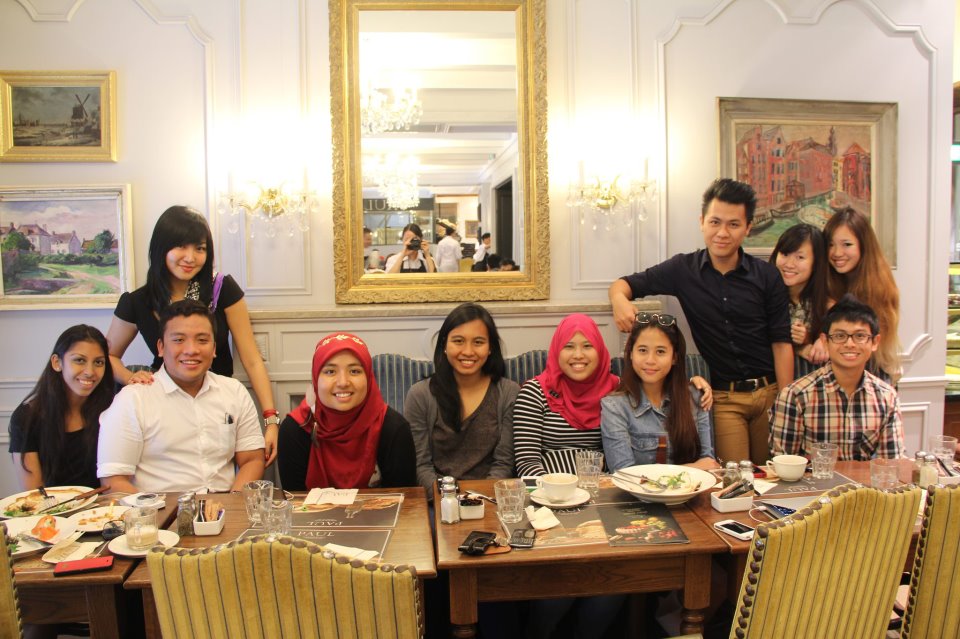 For Erfi’s surprise 21st luncheon at Paul’s, Takashimaya. Happiest of 21st, fee, and here’s to hoping you have a great year ahead while venturing into new life as a college student!

I’m pretty sure i had more to say when i dropped in, but it’s 3am and my head is swimming with pitbull and rihanna references thanks to my sluttalk paper. Everyone keeps telling me that i need to stop nicknaming my modules things like sluttalk, but all we do in class is talk about women sleeping with men, not sleeping with men, and reasons why they do either, so. Am I rambling now? I am rambling now. Ok in that case, ending off with this – girls, dont sleep with guys who give you reasons like 1. they drank too much 2. hey they think you’re sexy hey and 3. you might not have time tomorrow. Because they’re shit reasons. Ok, i’m definitely rambling now. Goodnight you guys.