sometimes you do things that are destructive and they do not occur to you to be so until after it is done. i was so pleased with myself over the weekend making a playlist for the rest of 2012, i used to do it in terms of months but i dont outgrow songs that fast and then they started getting repetitive. some way into the afternoon it occurred to me that the songs that make your heart swell are not the same you want crooning at your essay deadlines. Such is life.

the weirdest feels over the weekend included waking up in shock and being unable to figure out if i were awake or not, ever since insidious i’ve half expected to look down and see my own body sleeping when i wake. not sure how to feel about not being worried about this. also:

– difficult to feel panicked about impending essay deadlines with calm warm cat sitting unaffectedly in your lap giving you the lol human, yr essays are irrelevant face.
– it was a bad weekend for any writing related to academia
– 700 words into my paper at 5am i realized i disagreed with whatever i was writing and it made sense to rewrite it
– gave up and went to sleep only to realize i couldnt breathe, flu incoming, clearly this is my body saying to me ‘you are an idiot’ 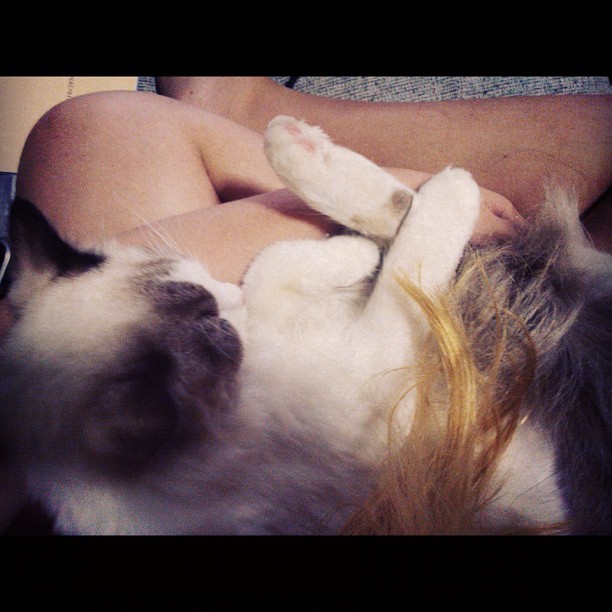 i applied for baptism this week, was considering two middle names specifically 1. james and 2. athena, both of which were voted out of the running by the entire world, observe:

2.
me: i think athena is a pretty swell middle name too
me: its the name of my cat
me: my cat might like me a bit better after that.
friends: it’s a pagan name and you are getting BAPTIZED my word jemma

it has since been established that a name chooser as a career is out for me/ will make shitty decisions as a parent which will affect my kids their whole life and doom them to be ridiculed by their peers for having stupid names / alongside chucking nutella at them when they whine at me.

other stupid things that happened this weekend include the latest ruling regarding the SYF arts groups. no wonder everyone leaves. feel like it would be good to live in a city where things like these mattered but we can’t help where we are born, also, too angry about it to write objectively so it is best to just end here.

have a good week ahead guys, and see you all at the perspectives film festival if you’re going!