#1345| Shopping down the Airstrip. [Discounts off your shopping at Changi Airport!]

So, Changi Airport invited me down on Saturday for a sponsored shopping trip within their public areas (Alas, not the duty free zone). A little bit of background- when im not slothing around in my dorm room in NTU, i live in the east, so the airport is familiar territory to me. I used to study there overnight and so on during the O & A level periods because, you know. Clean toilets. Anyway.

From what i remember, T3 had a minitoons, watsons, and Times bookstore amongst a few other shops i couldnt quite recall. Shopping- it’s not really the first thing that comes to mind when you think of the airport (unless you’re flying somewhere and have access to the duty free areas, in which case it’s a TOTALLY DIFFERENT STORY) (We have a mad epic duty free zone its got gardens and pools and live musicians so on) In any case i was very excited over Watsons because i could probably buy like five thousand lipsticks with the money they gave me which pretty much has me set for the rest of my natural life, so. 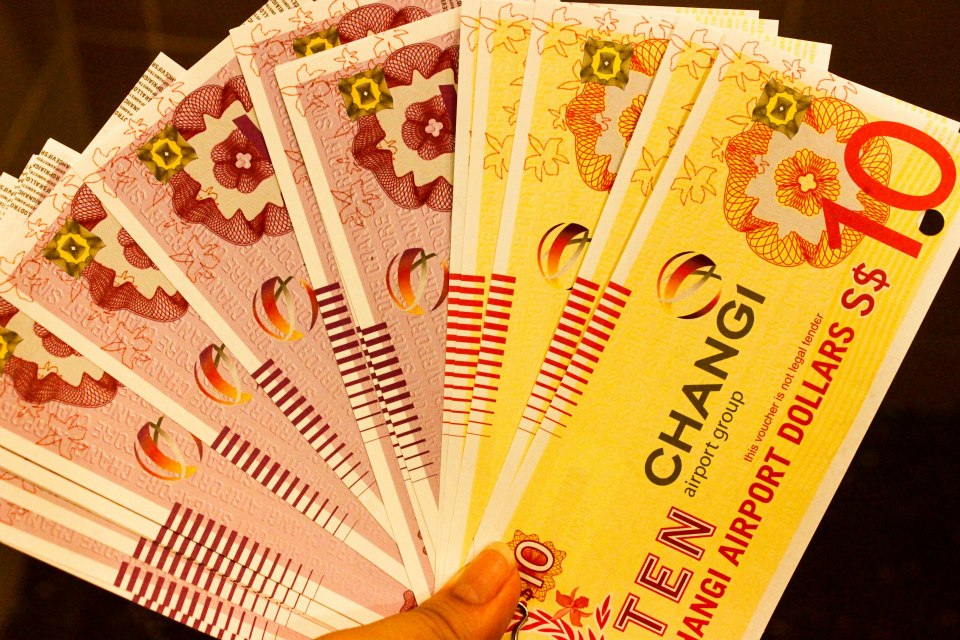 Changi Airport Group gave us $200 in shopping vouchers, redeemable at most of the stores there. I should also put it out there now before i forget: GST in Changi Airport is absorbed for most of the shops, and from now till 2nd Sept the GST absorption is doubled- you get 14% off the regular price of any product with a minimum spend of $20. I realized that Changi Airport absorbed our GST sometime last year when i was buying some stuff at Watsons after sending a friend off at the airport and BAM ever since then i’ve tried to stock up on essentials whenever i visited the airport because, hello. Student. Every cent matters.

Okay i need to stop talking about Watsons because im starting to come off as an auntie.

In any case, I was pleasantly surprised by the store selection in the airport. It feels like a virtual tour is in order, so: 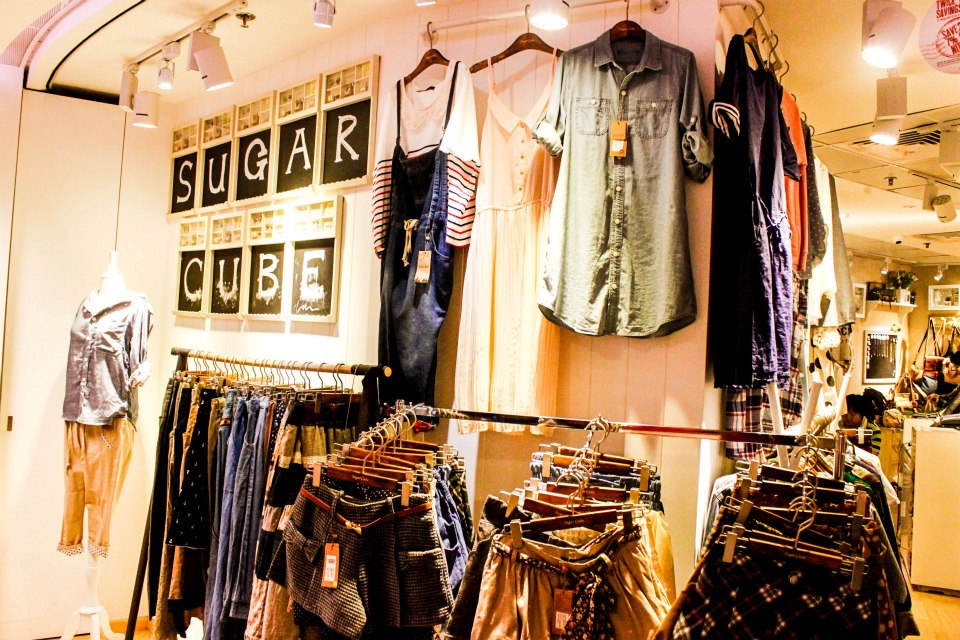 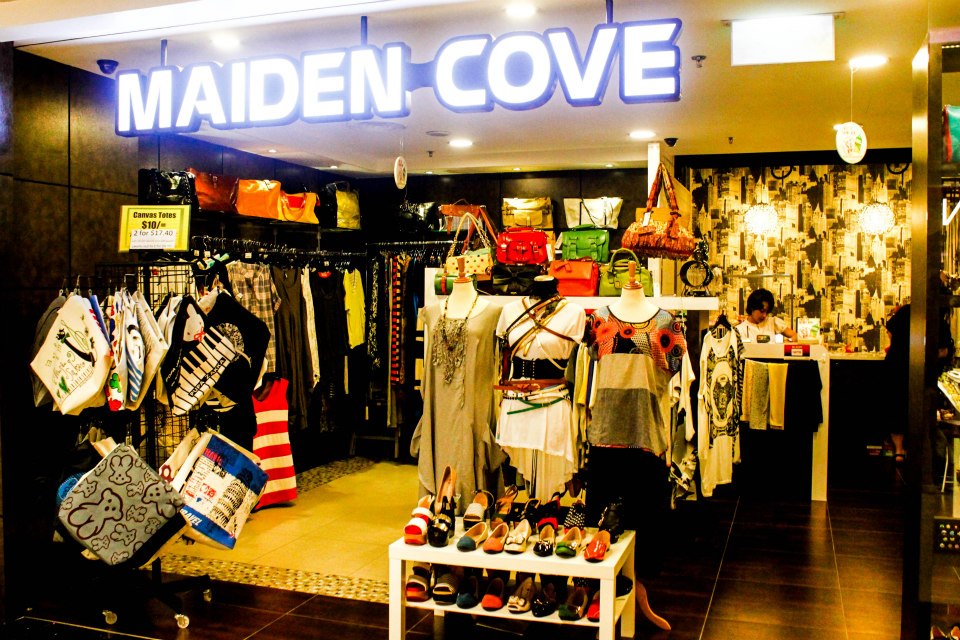 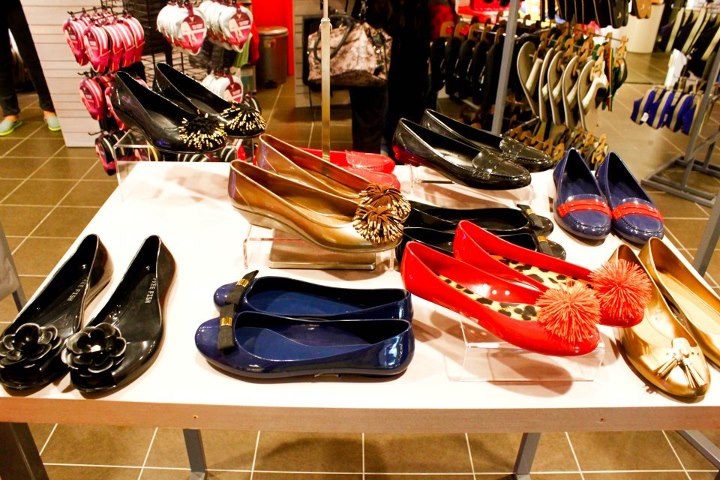 There was also a: 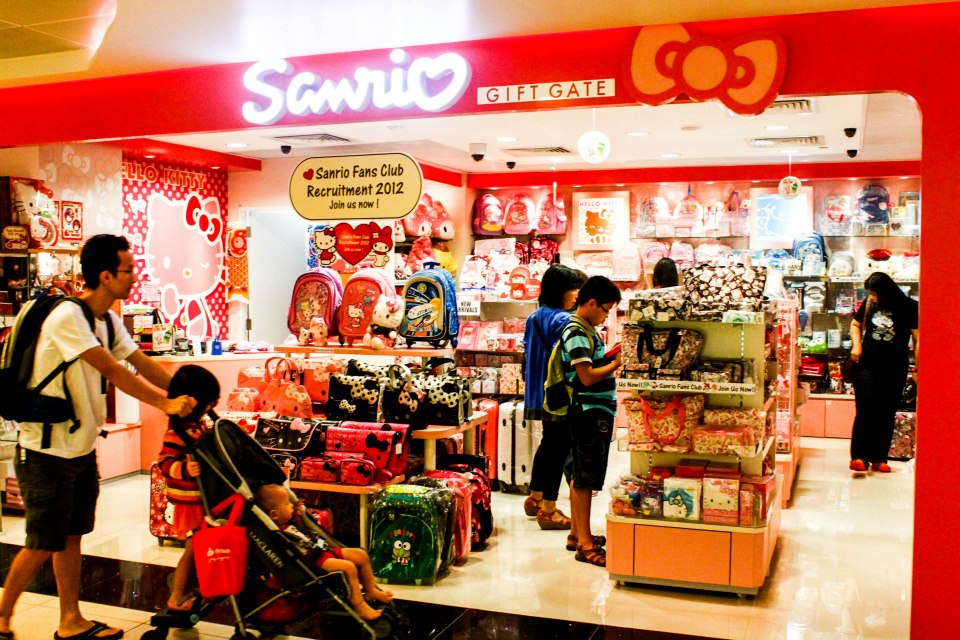 SANRIO SHOP
which got X-wen (fashecceentric) and I super excited because we’re both cat/hellokitty people. 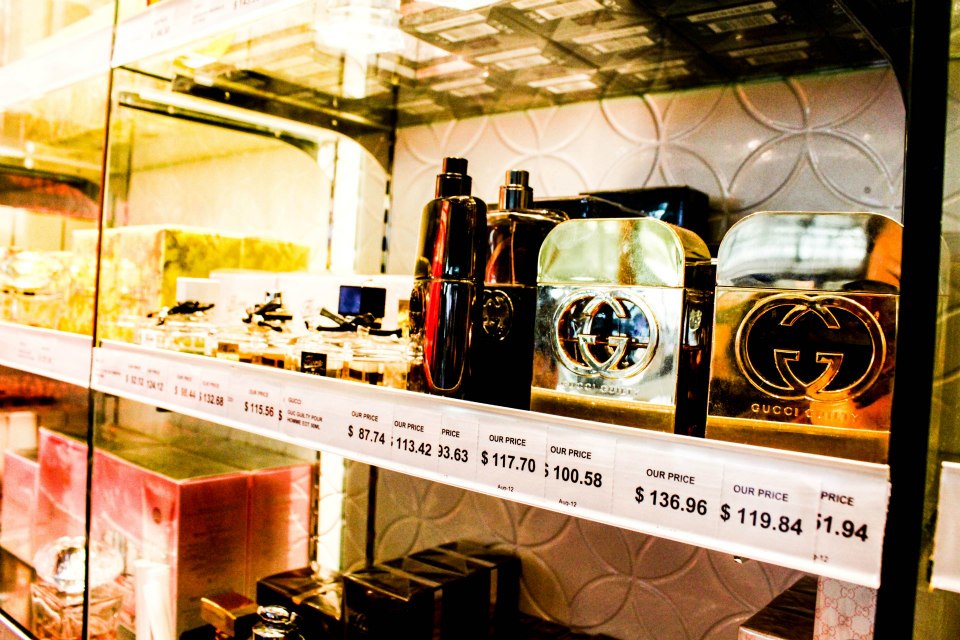 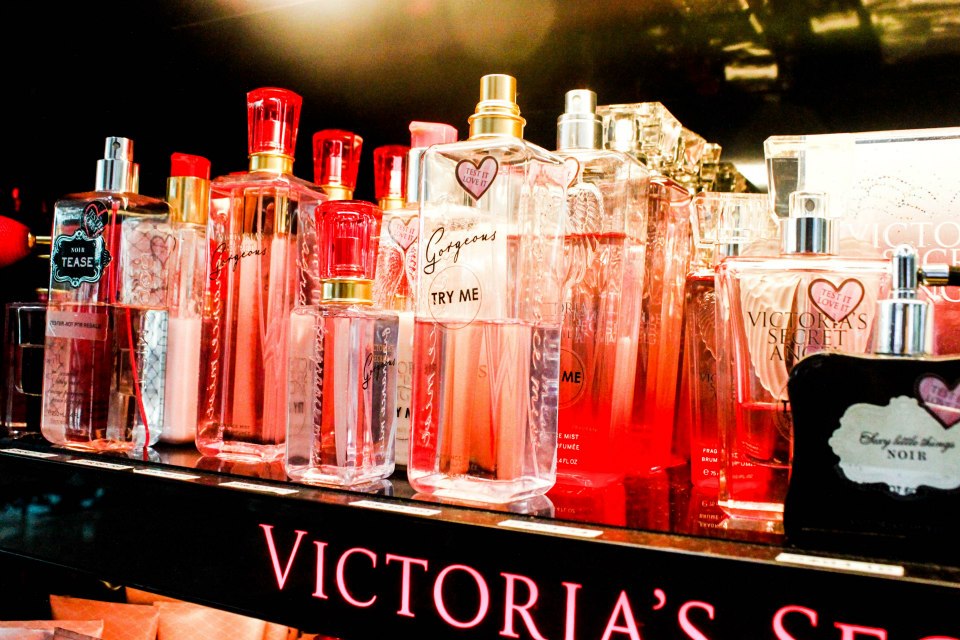 Oh yes, and the perfumes and cosmetics shop which got the rest very excited- personally, i dont get spending hundreds of dollars on perfumes. I mean, trust me, i love all the pretty bottles and smells (i am coming off as a superficial girl now arent i) but in all honesty i dont have spare hundred dollar notes lying around and even if i did i dont know if i would spend it on perfumes because i feel like they dissipate really fast. I’m currently using Sarah Jessica Parker’s COVET and Anna Sui’s Flight of Fancy, but they were both gifts.

On the other hand, im sure that when i do have the cash i am going to SMELL LIKE ROSES just because i can. Or something like that. What i was trying to say is, perfumes and cosmetics at Changi airport are up to 40% off downtown price so for people who do spend on perfumes/cosmetics regularly, this is for you.

For example, the SKII facial treatment is a whole 60$ off the downtown price of $220 after your GST reduction, and the Lancomee Genifique Face/Eye is about $30 off as well. There’s this other Lancome Hypnose Mascara that everyone was raving about- it’s going for a set of three, $87.40, as opposed to $50 per mascara wand elsewhere. I was super tempted to get this because i am a SUCKER for pretty packaging but i realized i was also a poor student so i went to watsons and got a Maybelline mascara instead. I am clearly not great at sticking to my no-talking-about-watsons thing.

For those of you who want to propose: 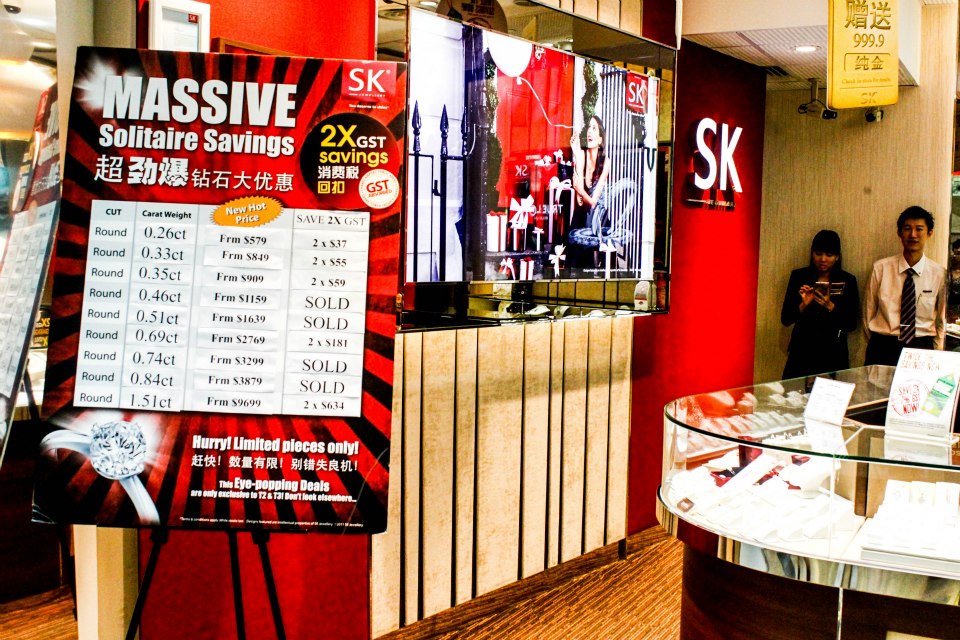 MASSIVE SOLITAIRE SAVINGS!!! ok not gonna pretend i know what that means, moving on,

& for those of you who want to travel in style: 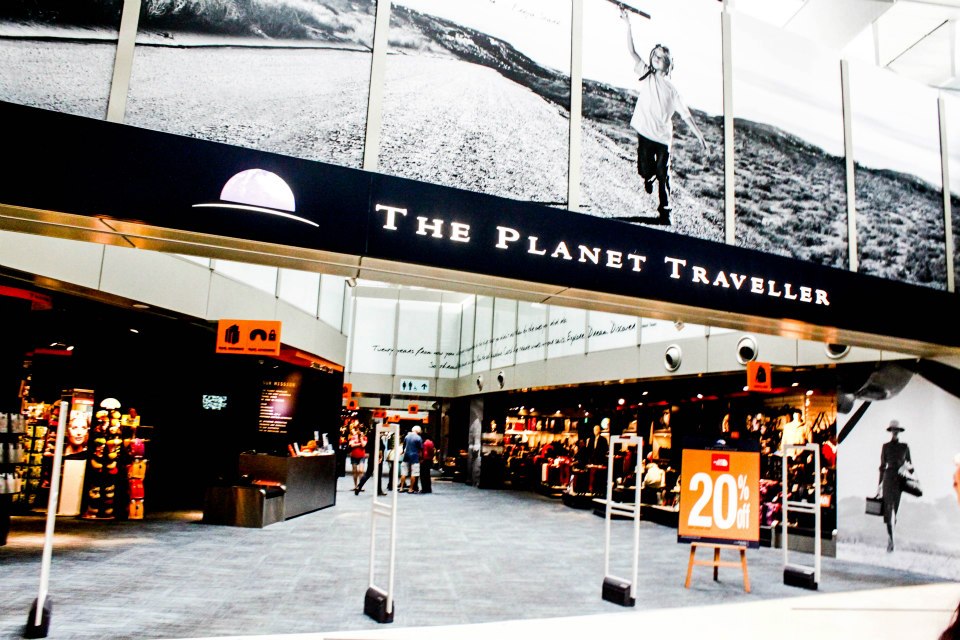 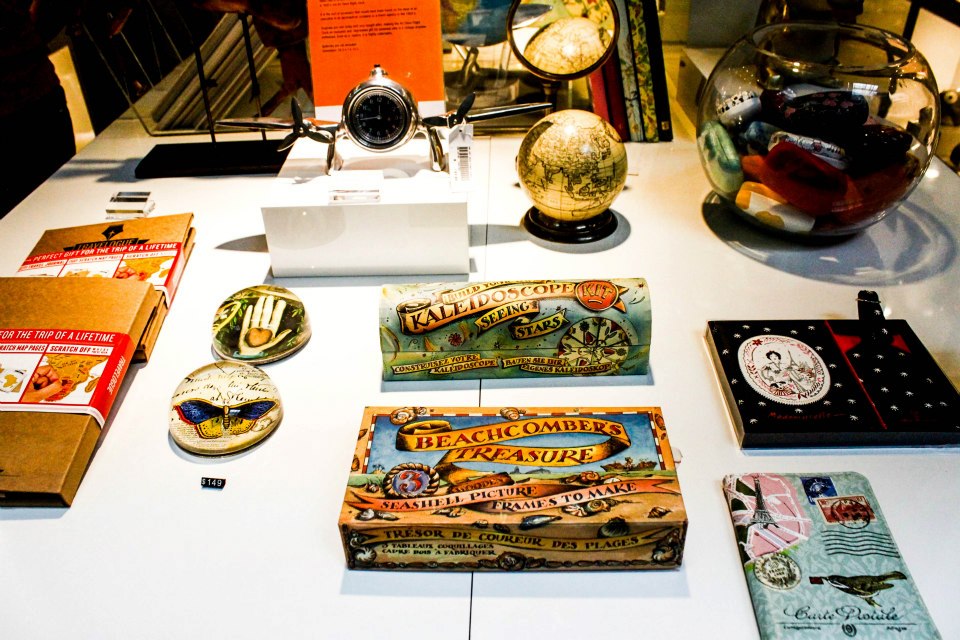 Can i just say that although i didnt buy anything from here, it’s a mad cool place- everyone who visits the airport should drop by here if only to gawp at the gorgeous merchandise. It’s essentially a huge boutique for all things travel, and it’s got the most amazingly beautiful luggages: i wanted to dive headfirst into the suitcases and trundle them up and down the shop like Becky Bloomwood in Confessions of a Shopaholic. Unfortunately they also cost a bomb so i didnt buy any (ok but to be fair, the discounts were quite substantial. I just dont really need a new luggage now- do i want one? Hell to the yes please. Do i need one? mmm, not so much.)

And the stationary/gifts section! I nearly stopped breathing. This, coming from someone who stands around in urban write all day just to finger the new stationary and paper. This is also the kind of thing that sounds a whole lot creepier when you type it out. I swear im not psychopathic. My point is, the gifts section was amazing. I dont even know where to begin. The huge illustrated globes? The minimalistic clocks? The beautifully designed stationary? If im not wrong, some of the stuff was imported from the Museum of Modern Art, New York- i thought i spotted the MOMA logo discreetly emblazoned on some of the pieces. There, there. Its okay if you cant afford anything in there. Just be like me and visit it, stand there, and revel in the beauty of the place. :’) 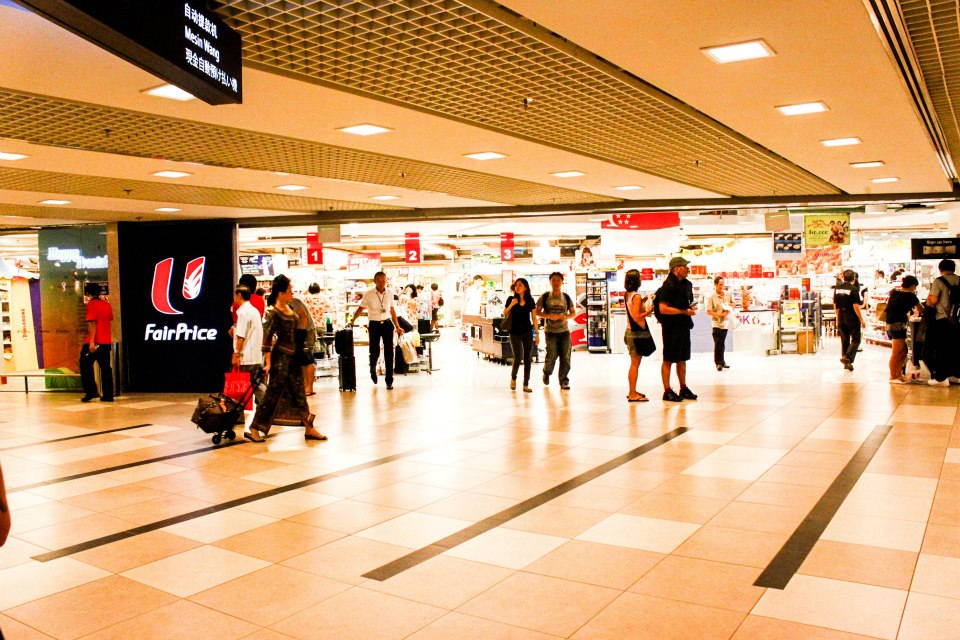 Oh also there is a big Fairprice in the basement- i saw this when during the study period, turned, and told my friends that all we needed was a pillow and toothbrush and we could officially move into the airport 24/7. 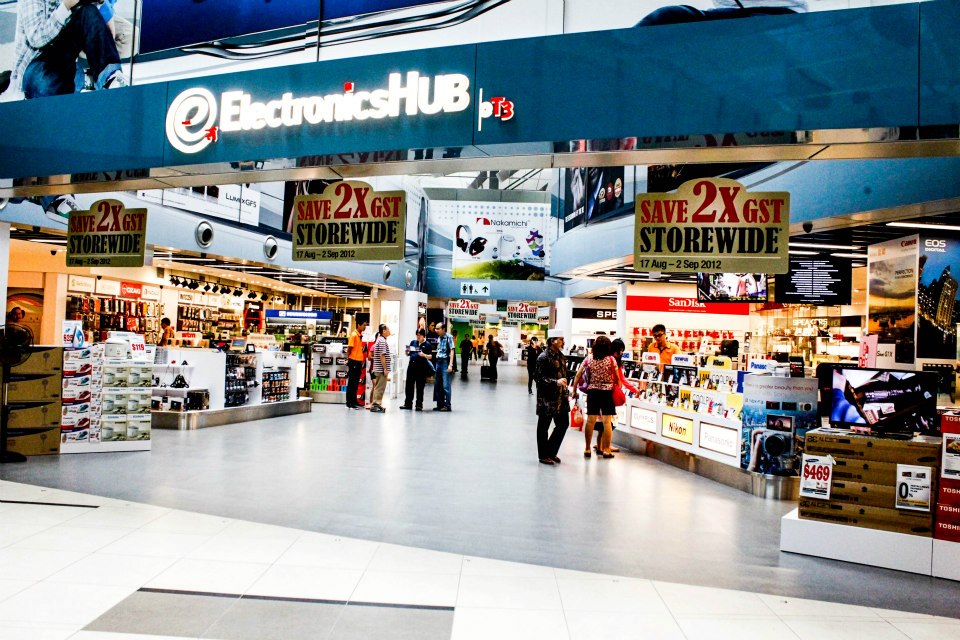 I spent most of my time here.

The Electronics Hub: it’s huge, and i never knew it existed till that day. I think its new. To be honest this was my favorite bit of the entire shopping trip- it made so much sense because electronics are generally huge chunks of money, so it stands to reason that you’d appreciate the 14% off more. Besides, they had great in store promotions- apparently there was a flat screened TV going for 800$ off.

I didnt get a TV, but i did get a pair of Soul by Ludacris earphones. I’ve had my eye on a pair of good earphones for awhile now, but could never bring myself to drop a few hundred on a pair, so this seemed like the perfect opportunity to get one! I know, i know. It’s a rapper endorsed commercialized marketing gimmick and you should have invested in a pair of BOSE headphones instead etc etc. 1. i dont have 600$ (which is approximately what a pair of good BOSE headphones cost. i know, right? Who knew aural pleasure came at such a price?) and 2. im honestly the ultimate marketers dream. Throw a bit of pretty packaging at me and im just like SHUT UP AND TAKE MY MONEY. I know it conflicts horribly with my earlier STUDENT LAH NO MONEY train of thought, it’s an awful habit i have yet to figure out a solution to. You would die, seeing all the nonsense ive bought over the years.

In any case the earphones were originally about $150, but i got them at $129 after the piled discounts! 😀 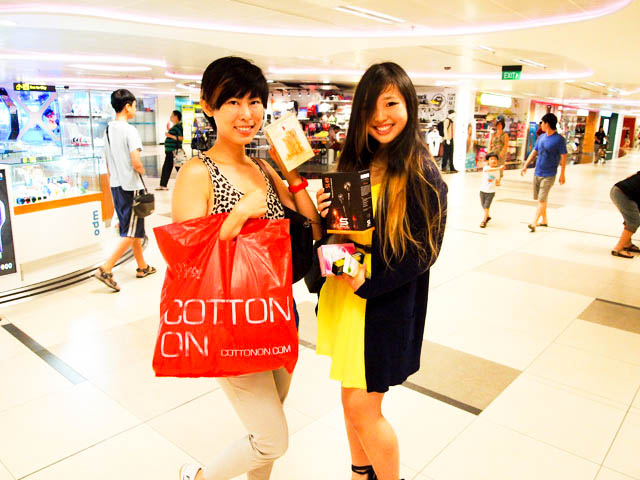 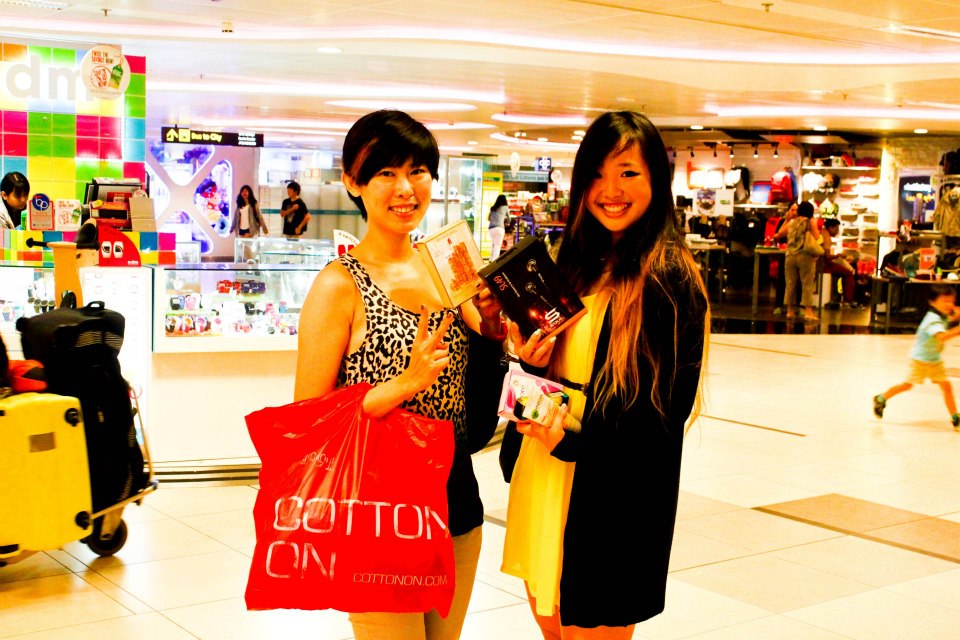 Here’s FashEccentric and I holding up our buys! I’m wearing the Jemimah dress in Lemon from Love, Bonito, which i maintain is my greatest achievement to date, having a dress named after me. 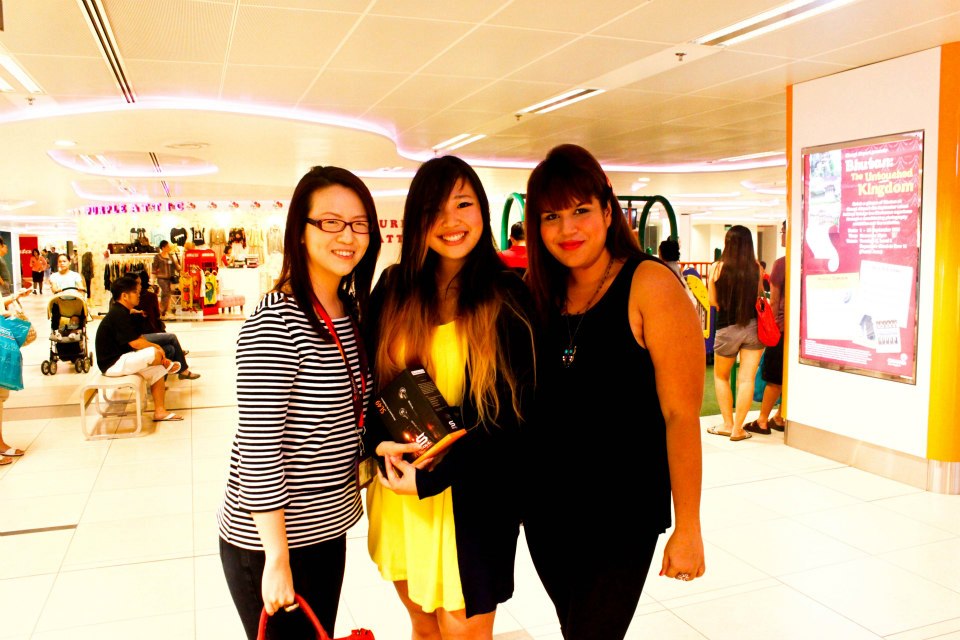 Also, with Yvonne, the representative from Changi Airport Group and Sheena from Waggener Edstrom, their PR company. There was also one more rep from CAG, Ching Wern, but she left early for her kid’s birthday party. Thanks so much for the invitation, guys!

Okay so here’s a picture of my haul for the day: 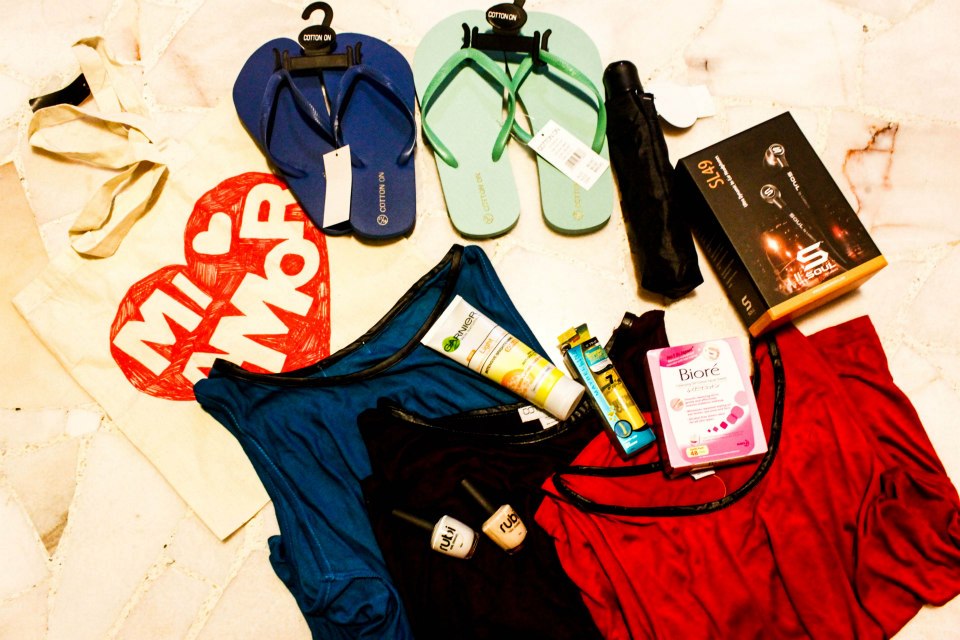 (I got very excited over the Garnier facial scrub because it said INTENSIVE BRIGHTENING on the label so i told Andrea that i was going to wash my face and come back with a FACE AS BRIGHT AS THE NOONDAY SUN but .. my face did not look like any sort of sun. 🙁 Maybe it takes a few days to take effect. Maybe im just a sucker for packaging. Oh well)

I cant figure out how much this was in total originally because 1. there were multiple instore promotions on top of the GST absorption scheme and 2. i suck at math. What i do know is I paid $40 in total for everything above, which i think is a pretty good steal.

I showed this to cindy and she looked at me very worriedly and went: Jemma.. why do you need another umbrella? Funny story here, guys. 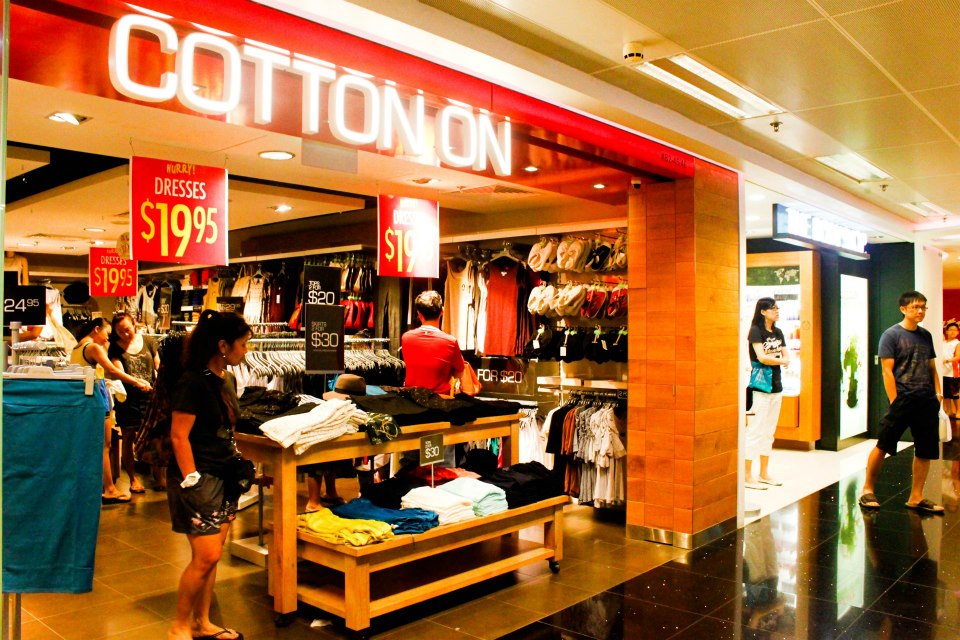 Basically, after buying my cosmetics from (watsons) and my earphones, i was left with about $35 changi airport vouchers. I just wanted to finish spending it up, and i thought it seemed like a pretty solid plan to just buy a bunch of basics from cotton on, so i went in and picked out a couple of tanks. When i went to pay for them, the instore+GST discounts kicked in and i was left with quite a bit of spare voucher value. Okay. So i grabbed an extra tank top and added it in- and the total value on the cash register went down. It was an epic what sorcery is this?!?!?! moment i am telling you. I put in a pair of flipflops and it went down somemore. Til this day this is something i dont understand. Notwithstanding the discounts, how can the total price go down when im adding items in?!?!? Mind = Blown. I had a super cartoonish moment with the helpless salesgirl who was wracked with giggles as i started throwing random items into the shop pile to make up the difference so i could hit the $35 bucks. It was insane.

In the end i went a bit too far and overshot by five bucks. But hey, you know what this means? I essentially got the entire lot for five bucks. And that, im thinking, is not bad at all.

Remember guys- the 7+7% GST absorption ends on the 2nd of September! Time to buy all your lipsticks, facial washes, and tank tops. And even past the 2nd, the 7% off is still a great initiative by Changi Airport (they dont get government GST exemption, they actually absorb the costs for us), so consider this your friendly public service announcement. You are welcome.

Thanks so much for the invitation, Changi Airport Group + Waggener Edstrom! I had a completely fab time. x