I want to talk a bit about this fantastic spa I went to yesterday which had amazing masseuses and a really well executed media plan which is honestly pretty kick ass impressive for a spa.

So for some reason, I was having the worst upper back/neckache yesterday. My headache was also so terribly pounding that my colleagues described me as Depressed Looking, Terrible, and Please Go Home. Yup. Just what every girl wants to hear.

My headache was so bad though, that I didnt just want to sleep it off because I’d wake up with backache still there- so Mavis and I googled Great Massage Places in Raffles and this popped up:

For those of you unfamiliar, how paid google ads work is, you do market analysis for certain targeted keywords, and then execute media buys and integrated SEO (Search Engine Optimized) copy into your website. Understandably, there will probably be more than one company vying for the same keywords (ie. imagine Starbucks, Coffee Bean, and Spinellis spamming money to buy the top search result for keywords “MOST AMAZING COFFEE EVER“) so Google does some algorithm mumbojambo and you appear on the top paid ads for a certain percentage of the search results. This is classified under Paid Media in Advertising Speak- referring to any ad space you buy. This includes Facebook ads, banner ads, blah blah blah.

So they managed to rank top on page 1 of Google’s search for Great Massage Places in Raffles, which was pretty impressive i thought. This despite the fact that after clicking through, none of their outlets were, in fact, in Raffles. They have one in Upper Thomson, River Valley, and Tampines, which was the one I went to.

I read through their website, which had reasonably compelling copy and the prices really did seem reasonable. The thing that sealed it for me though, was their Facebook page recommendations left by, i don’t know, a million customers? 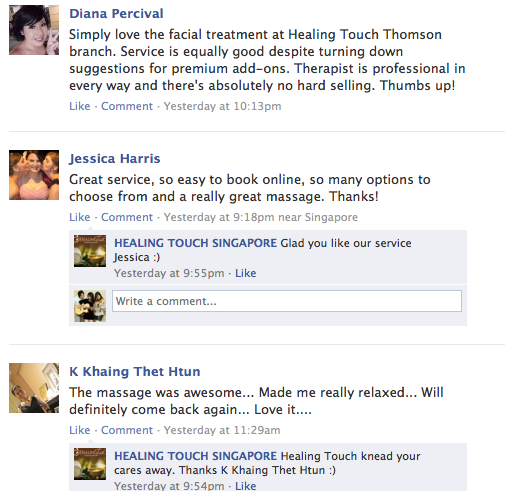 All discretely glowing reviews! I couldnt understand it. How miraculous were these massages that all their customers took the trouble to go on Facebook to leave them a nice review??? I booked my massage immediately.

Booking done via calling/online booking. It was pretty seamless and fuss free, which was nice esp since i was having a headache and didnt want to deal with Press One for English, Two for Chinese, Three for Malay.. you get what i mean. As another side note, in Ad Speak this falls under Owned Media- any thing or channel you own, like websites, Facebook pages, twitter handles, so on and so forth.

The Tampines branch was conveniently located within a few steps of the MRT, on the fifth floor of the CPF building. From the time i stepped in till i left, the staff and masseuses were polite, soft spoken, and could do wicked things with their hands. I chose their signature Asian Fusion Massage,which is an oil based stress relieving full body massage, and at this one point in time the lady literally got on all fours on top of my back and started cracking the hell out of it. The point being i felt absolutely amazing after the whole thing, and even more impressively- noone asked me to sign up for a package even once. UNHEARD OF.

Of course, they don’t ask you to sign up probably because they know they’re so good you’ll be back soon…

Still, I didnt understand how it could get so many positive reviews on Facebook. I mean, I checked in on foursquare and tweeted about it (received a BUNCH of enthusiastic replies from previous customers, they obviously have a cult like following), and I would probably have made a passing mention on Facebook or my blog, but go to their Facebook page and leave a paragraph? Really?

Then this morning I received this: 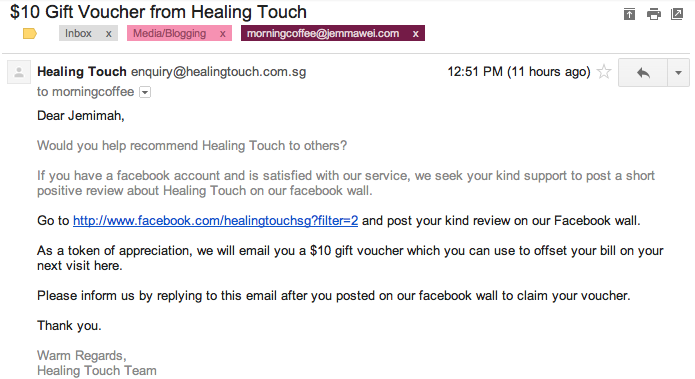 it all makes sense now

At first i was wondering how they got my email, and then i realized- The online booking system. So devious! And then, the follow up incentivized call to action.. so quietly effective because potential customers (ie. me) would be won over by the barrage of positive reviews!

This is where the last bit comes in- I very superficially explained Owned and Paid media earlier on, but the last one is basically the dream of every marketer and brand: Earned Media. Earned media is the “snowball effect”, “word of mouth“, or as everyone loves to call it, “viral” effect of any advertising campaign. Most brands are fantastic at paid and owned media, but earned media is always a tough nut to crack. I think Healing Touch did a pretty neat job of integrating paid and earned media to achieve their desired results: not case study level, but pretty noteworthy nonetheless.

And of course, their massages are to die for, so that helps.