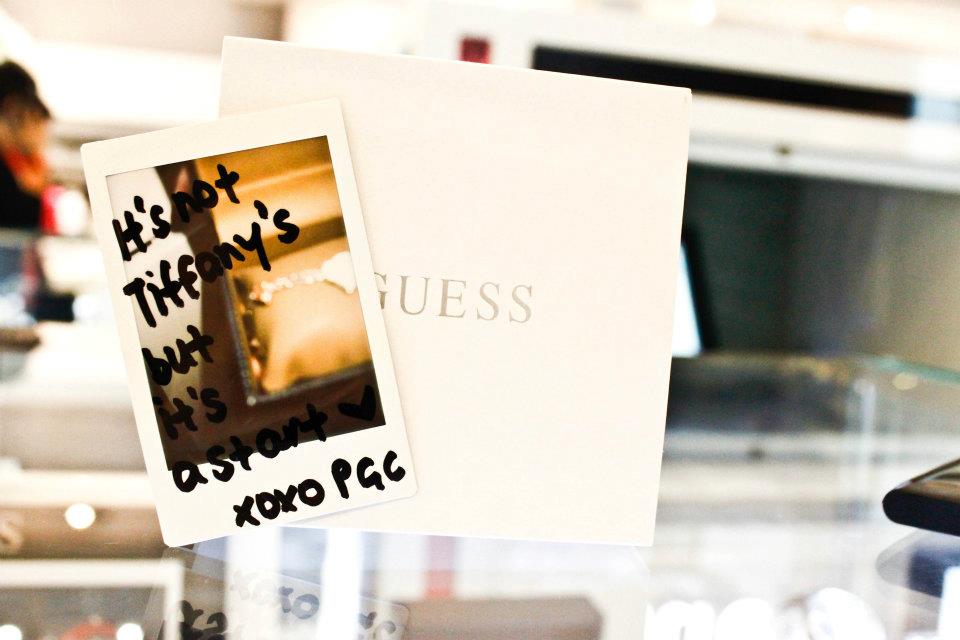 What do you get a girl who has no modicum of self control and buys everything she wants immediately?
Something she never knew she wanted, probably.

Ranice turns twenty in three days so the PGC planned a surprise for her today. I think the last time i saw her was a good six months ago, although i could swear i’d just met her yesterday. 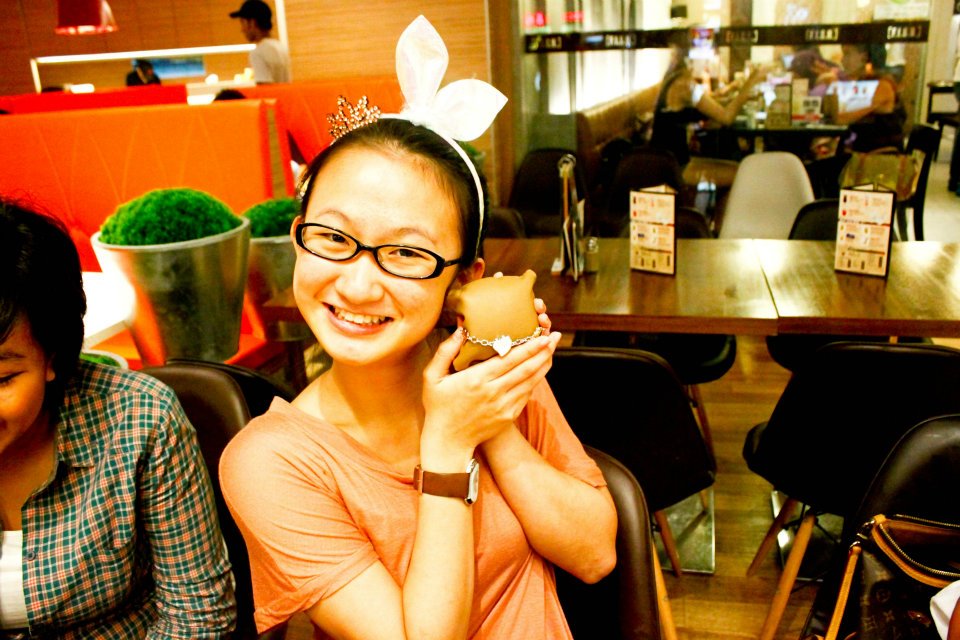 We had a bit of a wild time looking for a suitable gift for her. Firstly, she goes through a million phases a month- hello kitty, colors, bag brands, toys, etc etc, and we can hardly keep up. Secondly, her current obsession is this ridiculous plastic collectible bears, bearbrix or something like that, which looks like the five dollar plastic animal shaped money boxes from pasar malams but costs about 200 bucks a pop for the big ones. Also, knowing her she’d outgrow these things in two weeks..

the small keychain sized ones are about nineteen ninety, to which i say GET AN INSTAX CAMERA AND SPEND THE MONEY ON FILM INSTEAD. But, you know, to each her own. We ended up getting her a gorgeous Guess charm bracelet, which made her cry: 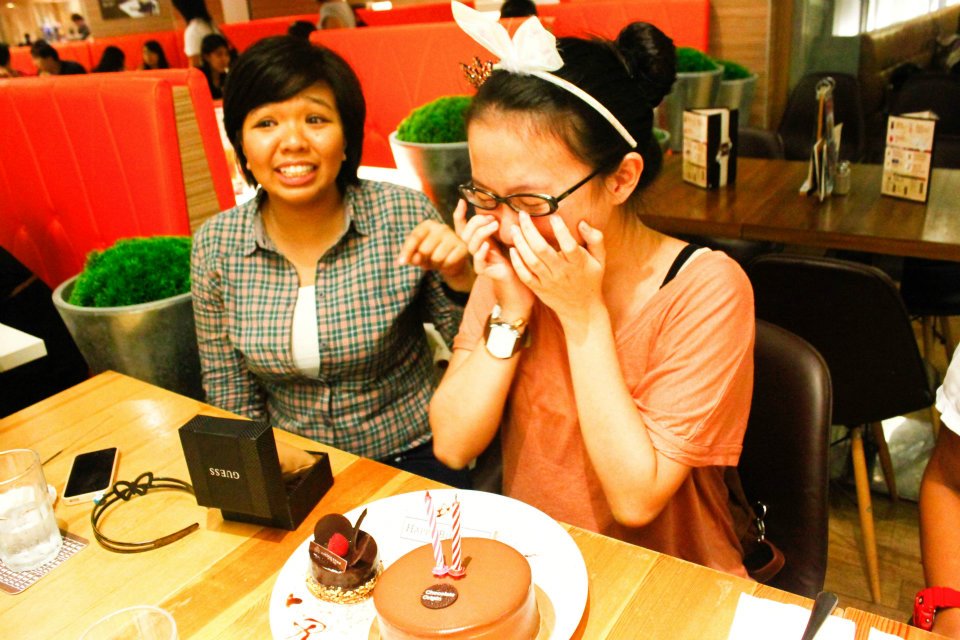 But I’m getting ahead of myself. Anyway, we headed down to F.I.S.H. at 313 Somerset which pleasantly surprised us with a free flow salad bar with every main course ordered- everyone was really pleased by this except ranice and syaf because they are unhealthy and do not eat veggies. the only thing ranice could eat from the salad bar were the nachos (don’t ask me why there are chips at a salad bar i know its ironic) and she got so agitated when the nachos ran out that she practically shoved the empty glass bowl into the waitresses’ surprised arms, leaving me to explain apologetically “she really likes nachos” 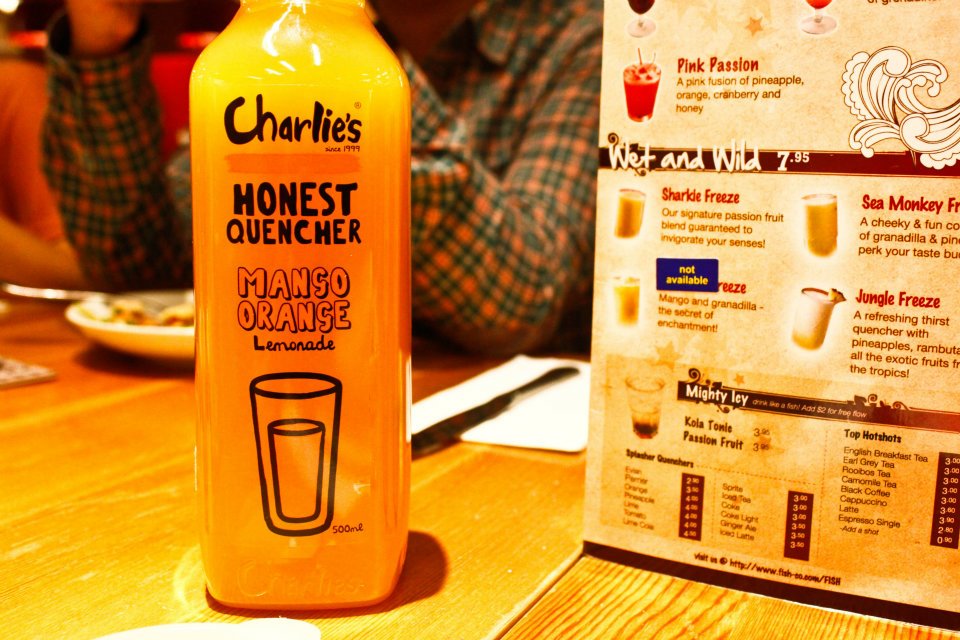 A drink syaf bought from tampines. I got relatively excited over this because i liked the packaging. In fact, i think i might have scared her a little because i grabbed the bottle and went “WHERE did you get this???” and she went “umm.. tampines…” while cautiously trying to pry the bottle away from me. I just get very excited over packaging, okay. 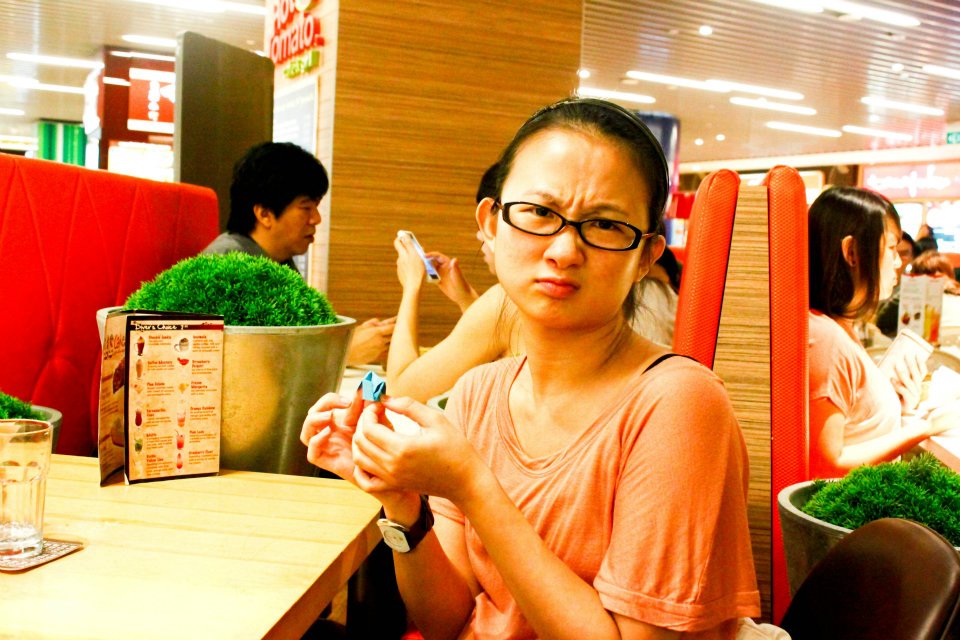 still obliviously making origami out of.. okay wait a minute, i have no idea where she got that scrap of colored paper from. Possibly she nicked it off a passing child. I wouldn’t put it past her. 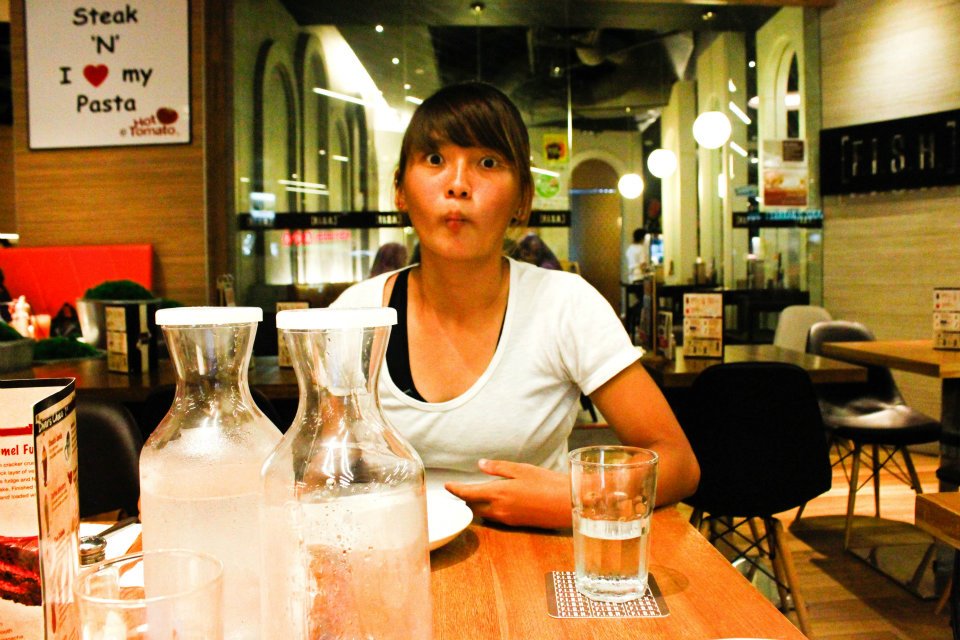 Dragonboater Connie with her amazing glow and tan. 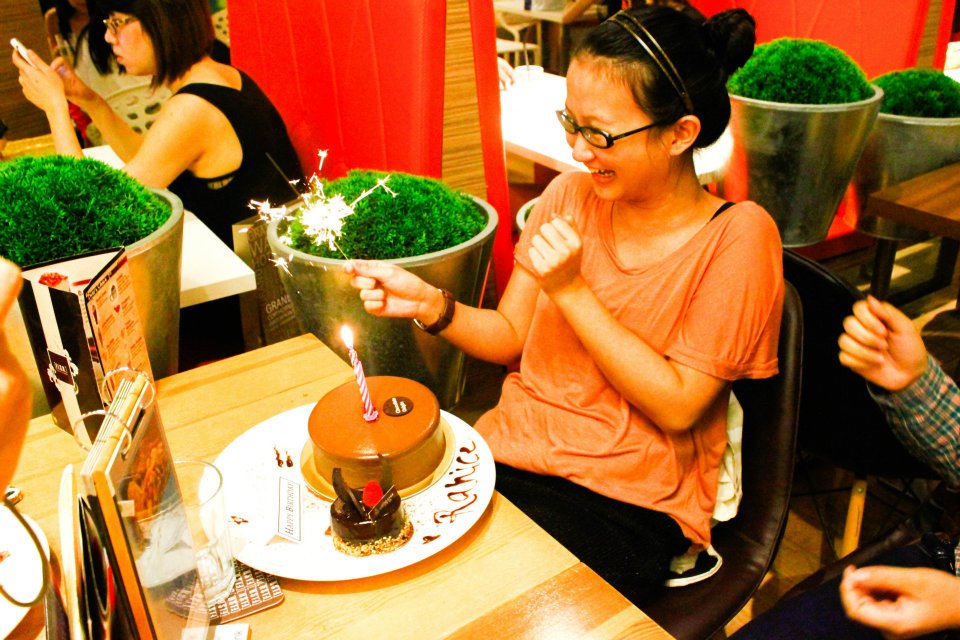 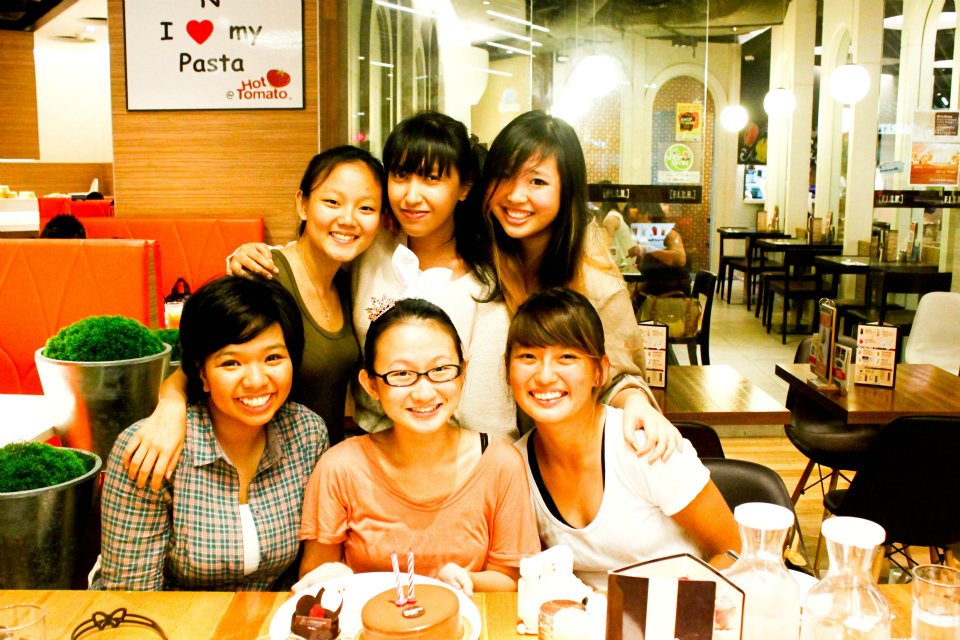 Surprise!
She was so happy she cried. I really liked the sparklers too- apparently, the F.I.S.H. staff asked if we wanted the electronic happy birthday played over the speakers and for the staff to come out and sing.. but su said “no we would rather like to still be friends with her after this”. Loving the bluntness. Earlier she stared at the bearbricks and demanded “why is this so expensive but wrapped so cheaply” to a very alarmed action city salesman. 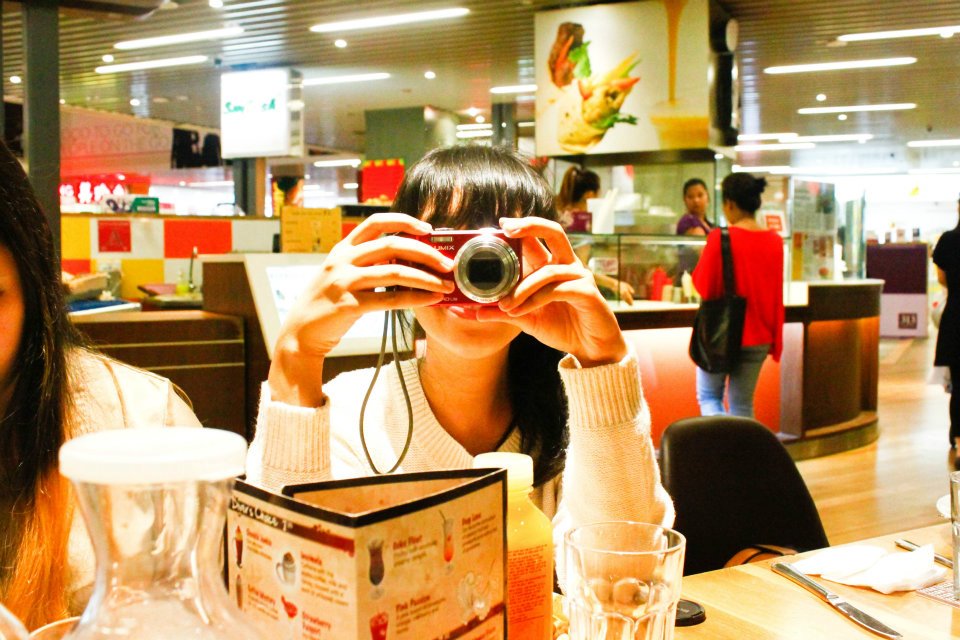 Some people are good with photos, some with words, some with doodles. Syaf here is good with video collages- its an interestingly unique niche, and she’s putting together a video story of today with four second clips she took at random times. She’s very good at this- i’ll post it up when she’s done! 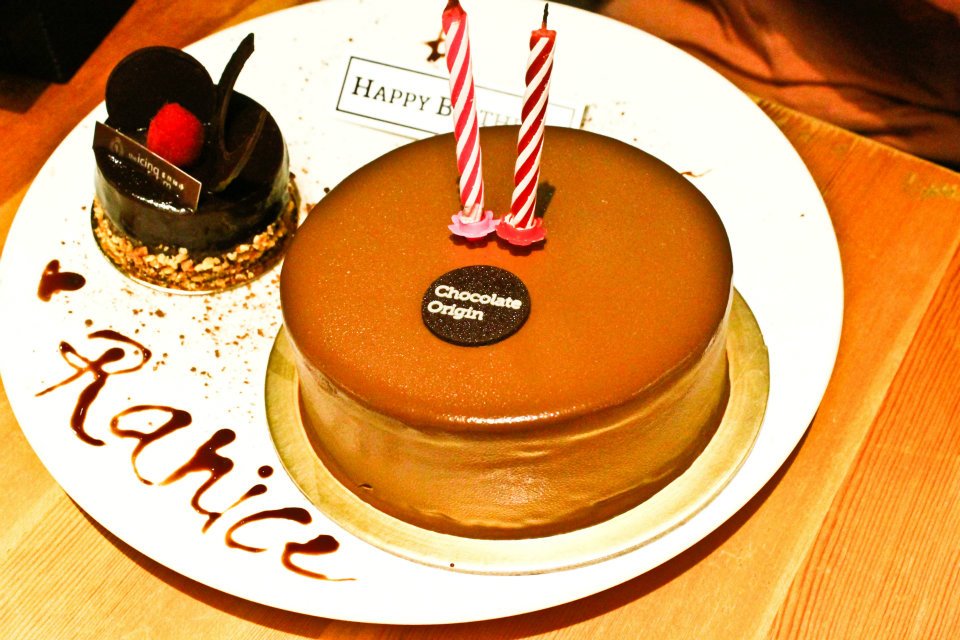 A word on this cake.

It’s from Chocolate Origin, and safely one of the best chocolate cakes I’ve had in Singapore. It’s probably better than Awfully Chocolate’s, and that’s saying a lot because boy oh boy am i an Awfully’s fan. The chocolate cake (original) from Origin’s is nice and smooth and thick and solid, and doesn’t melt while you’re eating it, which is nice. It’s also amazingly delicious, obviously. Everyone couldnt stop eating it despite being very full with salad and fish.

However, we also suspect they lace the cake with drugs/dope, very possibly WEED. Its definitely not alcohol because we would have probably been able to pick that out. The more cake we ate, the more giggly we got, and by the time the cake was gone so was our sanity. We were openly laughing at everything that moved and at one point i swear su shouted “WHY IS EVERYTHING SO FUNNY TODAY?!?!?!” After that, things were a bit of a blur. I shit you not. I vaguely remember traipsing around Forever 21 and H&M and doing all sorts of ridiculous things. There is video proof of this.

Nonetheless still one of the best cakes.. ever. It also comes in dark chocolate but we didnt try that. Very affordable too- the basic original 6 inch cake is $29 dollars, and $36 for the dark chocolate cake. The price increases as the cake grows, and the 12 inch one is $174 if I’m not wrong. They obviously also know they taste good- you’re allowed to have a free sample at the counter before buying the cake. Ive never seen anyone walk away from it after trying a bite. 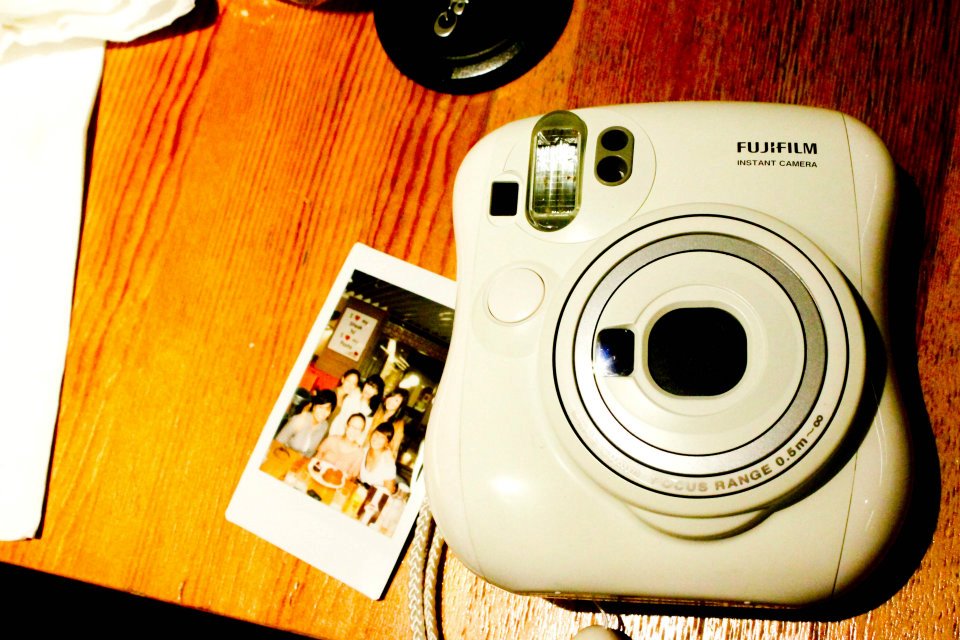 my new baby which i picked up from singpost this morning ^^
All in all a lovely evening spent with the PGC.xxx

i hope you guys don’t think that I’m going to let you go without talking a bit about Athena. it’s seriously a compulsive habit that i have to talk about my cat at least once every few days on my blog. i also mention her very enthusiastically to people i meet, friends, colleagues, random old people on the mrt.. and last week i got so emotional i yelled at a friend: “MY CAT AND I COME AS A PACKAGE!” in response to a comment regarding dogs and their loyalty/cuteness. 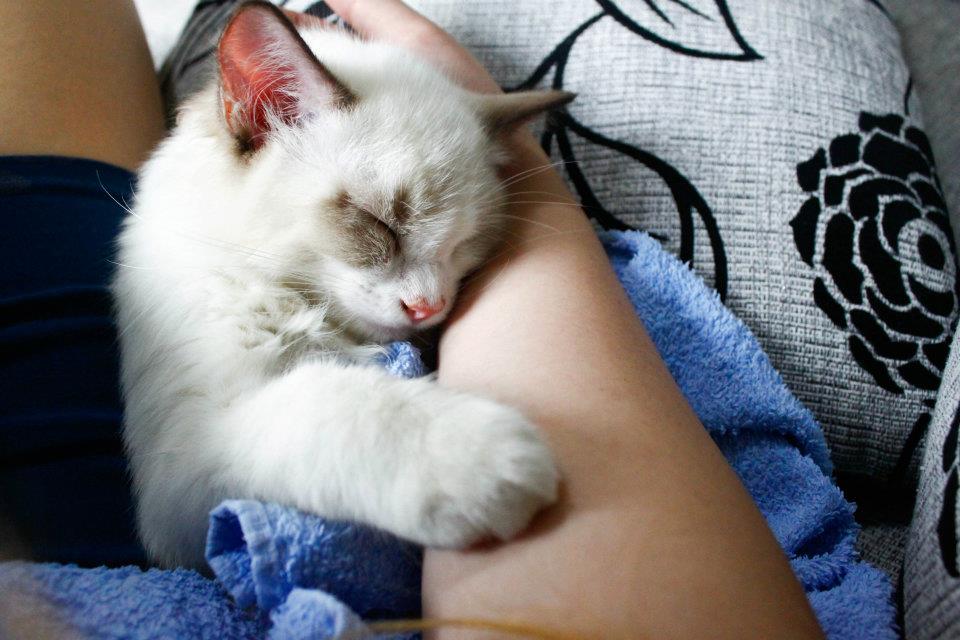 Baby kitten needs to be hugged even to sleep.
Normally i run from the first sign of excessive touchiness/clinginess but with athena i am relatively helpless 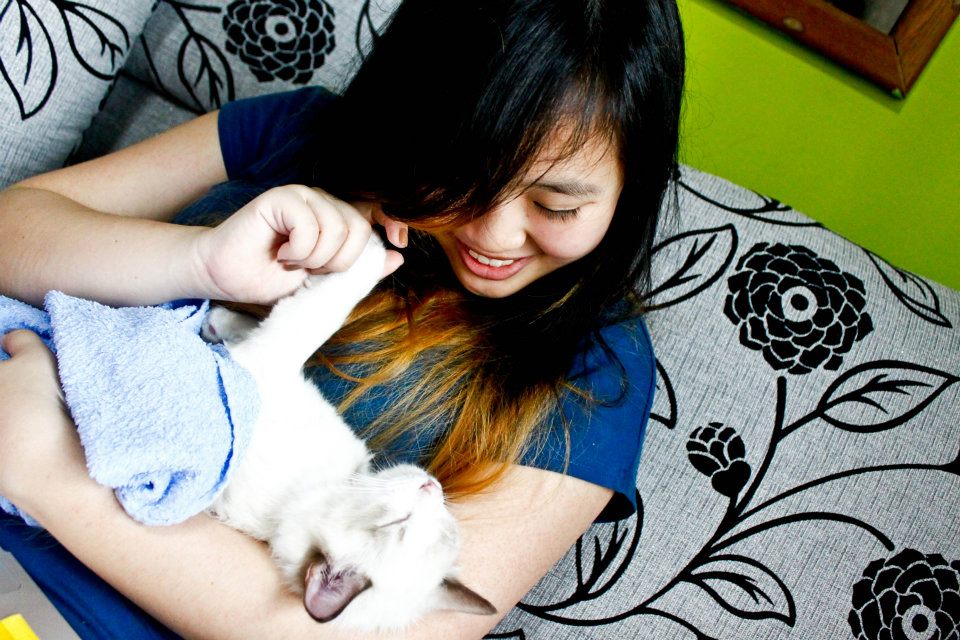 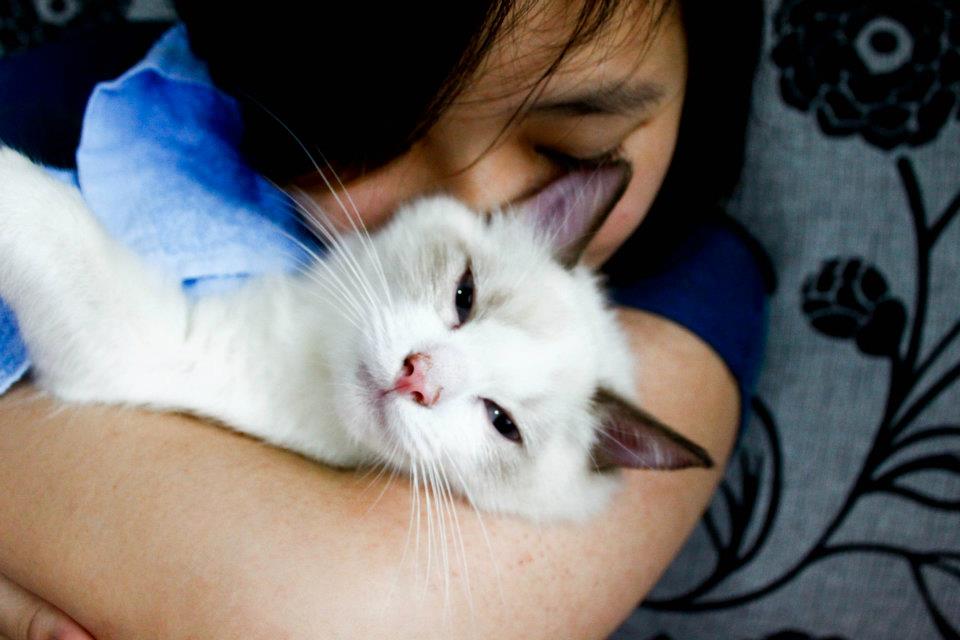 Seriously all i want to do is to hug her all day.

I think my consistent rambling about athena has rubbed off on some other people- clement got a kitten too, today, and I’ve been asked questions on breeders, where to buy a cat, cat breeds, and so on. To which i say, WELCOME TO THE FELINE FAMILY.

What was that they said about cat lovers never being able to talk about cats without coming off as slightly crazy?
Yeah.