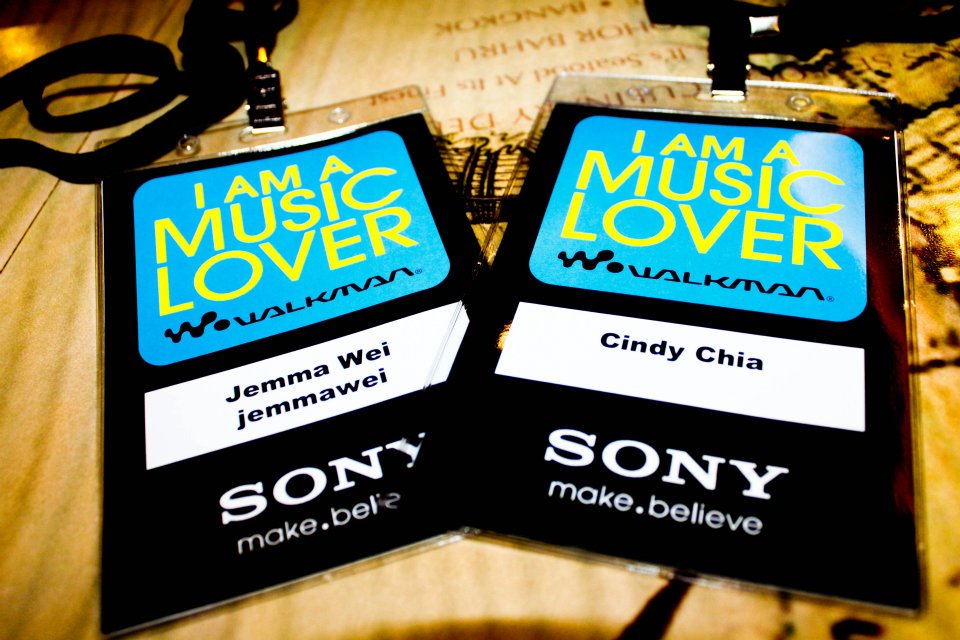 So last night, i attended Sony’s Walkman Z series launch party at Helipad and brought Cindy (vocal talent, host, emcee, etc etc etc) as my +1. Was a little flurried because i rushed down from a client meeting at Science Park, which is near NUS, except it’s way more secluded and therefore cabs are not aplenty. On that note, Silvercabs i called and made a booking and you said your cab was on the way and would reach in ten minutes- twenty minutes later it became evident that it was not, in fact, on the way, and when i called back a new customer service officer informed me that no booking had been made. WHY?! WHY DO YOU DO THIS TO ME?! WHY DO YOU CONTRIBUTE TO MY GROWING PILE OF TRUST ISSUES REGARDING UNKNOWN FIGURES ON THE PHONE?!

The launch party was held at Helipad, and was easily one of the best tech events i’ve attended. The band engaged was great- 53A, they play at Timbre Artshouse on tuesdays, and the entire ambience was pretty good. There were drinks and the lights were sufficiently dim as they should be when there are drinks involved because people tend to trip.. and stuff. 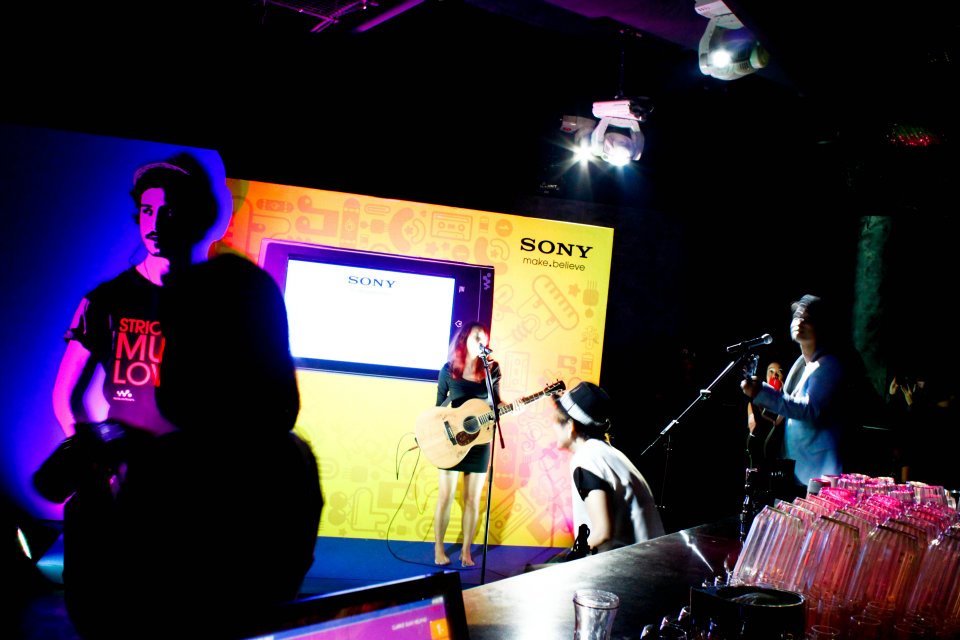 On hindsight, it was a really smart move to hire 53A and work the lighting- there were gorgeous models walking around giving us a preview of the walkman, and my goodness. When I slid on the headphones and listened to the music playing, i could hardly hear 53A. The clarity onscreen was so sharp it literally cut through the dim lights, very, very pretty. It’s a 4.3″ multi touch LCD screen, and the entire handset runs on Android- the first ever mobile entertainment player from Sony to be powered on Android actually! (INSTAGRAM!!! ok wait no camera. this was what happened when i got my iPad too i got all excited and downloaded instagram before realizing it had.. no camera.) 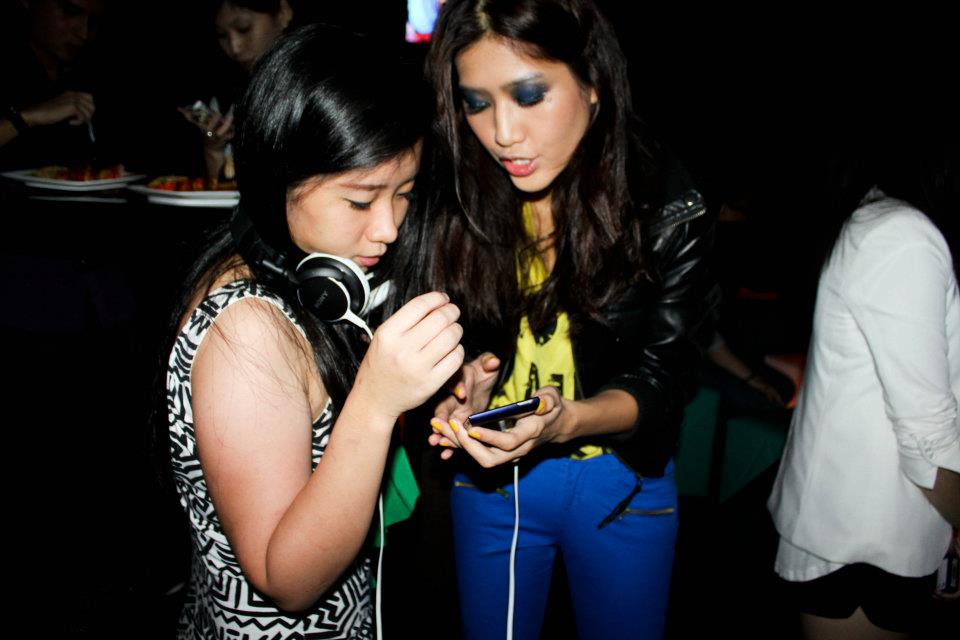 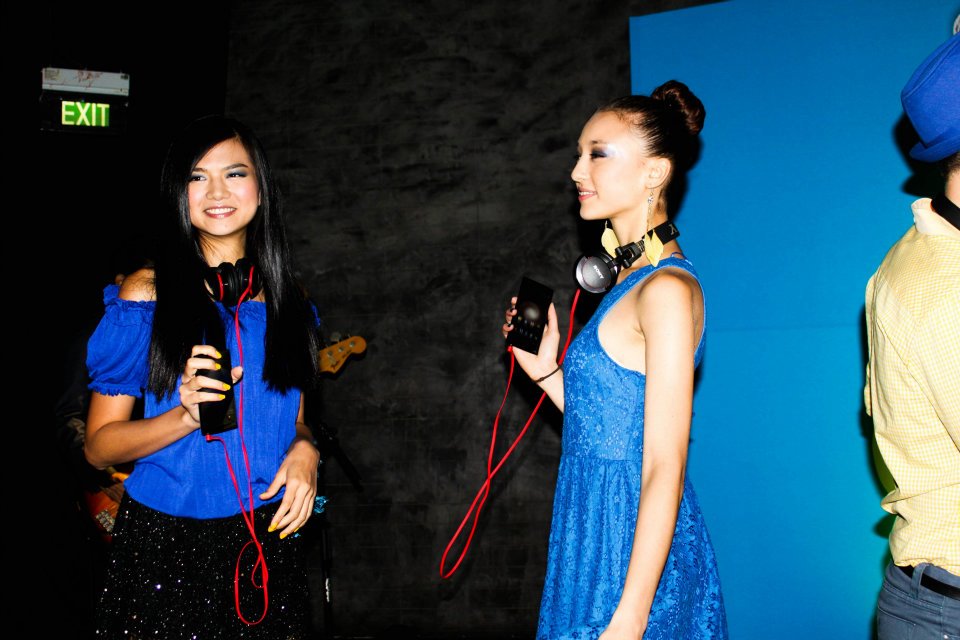 Later Cindy asked the model why she was so tall which kind of flummoxed her. Cindy you need to stop asking people questions like that or people are going to start comparing you to Karen Smith. 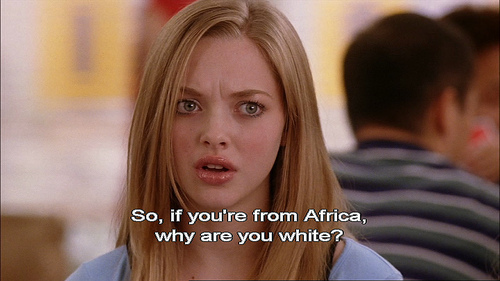 See what i mean.

I was initially a little confused and thought the walkman was a phone- it looks incredibly like my lumia, same gorgeous sharp display and everything. Turns out it does nearly everything a phone can do- besides take photos (sadly, no camera) and make calls. And more, actually: it you can use wifi/bluetooth to ‘flick’ your onscreen content to compatible TV/PC/home audio systems to stream your media from them! I’m going to figure out a way to do this with Andrea’s car stereo system secretly.. 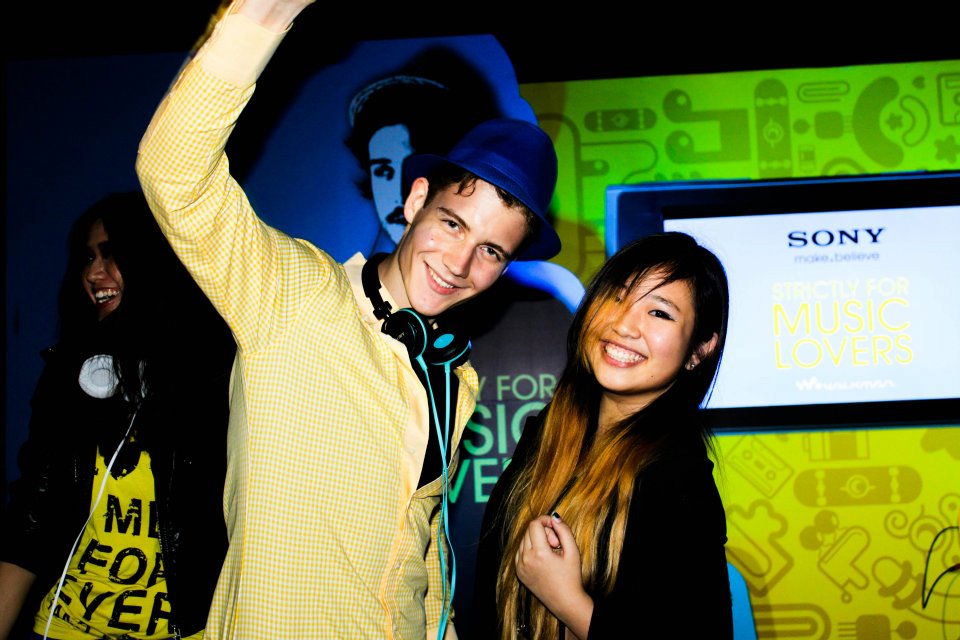 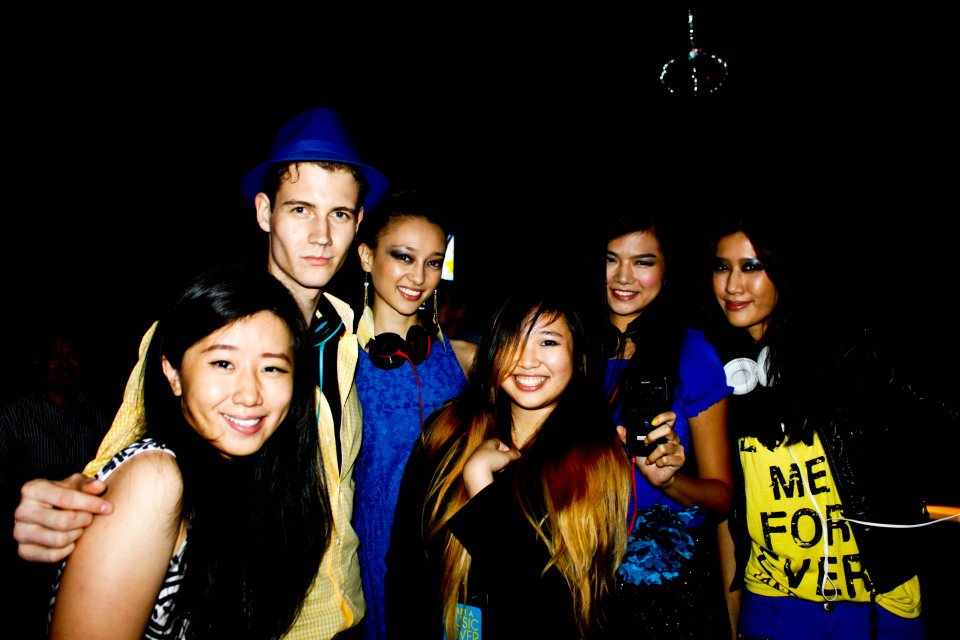 very friendly and fun loving models who pulled Cindy and I onstage halfway through 53A’s set! We ended up having our own dancing queen moment. In fact, we tried to pull some other girl up to the floor too… but we got rejected in a very panicky manner. Oh well.

Oh yes another thing i wanted to point out- i was so impressed by the organization of the food and what not! Usually at events they either have a buffet (messy) or waiters walking around handing out canapés (usually cubes of raw unidentifiable meat that leaves you very hungry and pining for like a cheeseburger or something) but last night they had staff walking around offering pre arranged gourmet plates of food to the invitees! I didnt have any because Cinch and I wanted to go for ramen (didnt happen long queue long story) after that, but at about 7:40pm like clockwork, all the waiters suddenly started handing out plates of dessert cakes! The transition was so seamless. Ten points for Waggener Edstrom, the PR company managing the event. 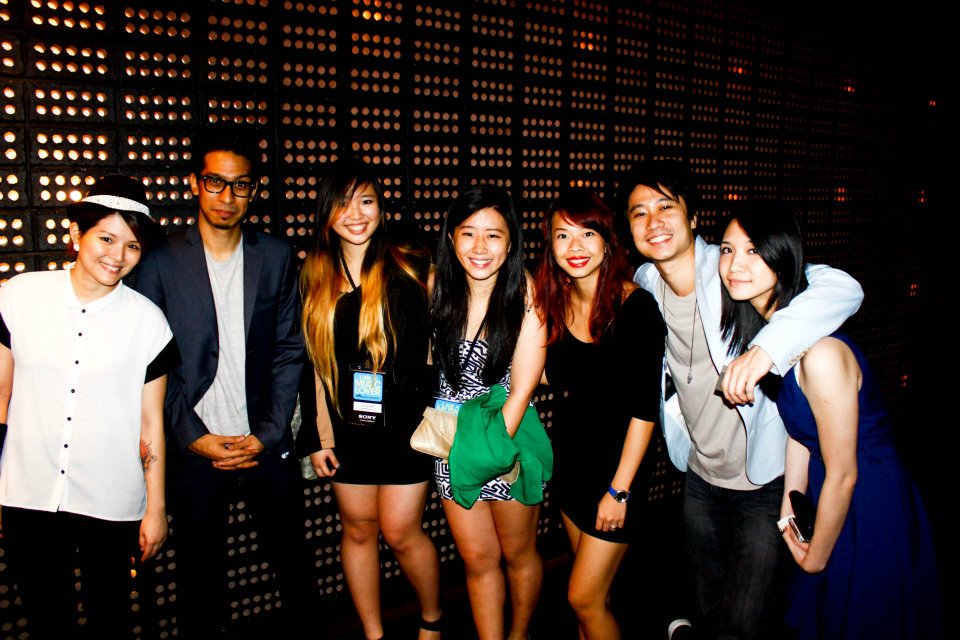 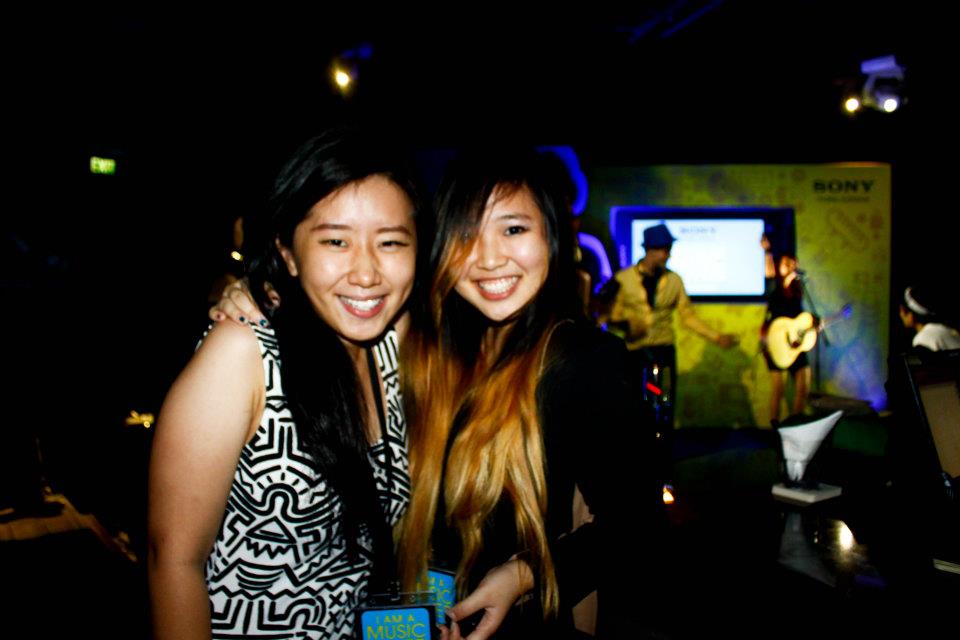 So much win in one night ^^

To be honest, i was slightly surprised when i received the invitation for this event because my impression of a walkman is as follows 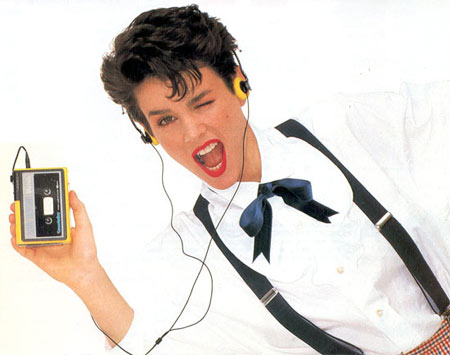 Yeah, you know it.

And attached was this photo of this mega high tech looking gadget and i was thinking to myself, are they inviting me to the launch of their new phone!? I know what walkman phones look like. They look like this: 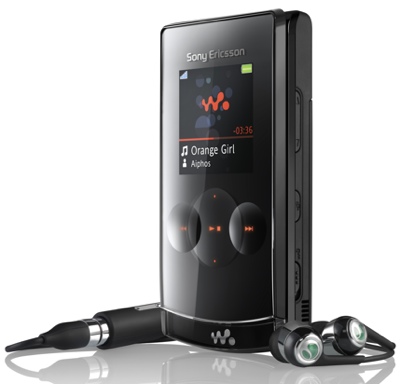 All my friends had the W980i in secondary four and it had like an 8gB internal storage which was the coolest shit on the market back then. I remember because i lusted after it like anything but couldnt afford it (as usual). Digressing a little- am i just being weird or does anyone else wonder why they always put “orange girl” as their playing track in sony phones?

But then i reread it and realized that this gadget wasn’t the prettier reincarnation of the w980i, it was a mp3 mp4 i can’t keep up with this jargon man Mobile entertainment player. Now, i don’t normally keep an eye on the music player market because i’ve had my iPod since sec 4 and I’ve never had a reason to buy a new music player, so to say that this surprised me is somewhat of an understatement. 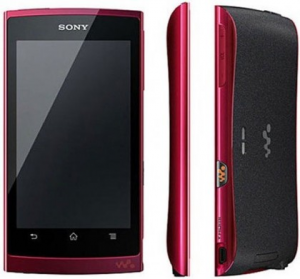 Sexy or what.
Between this and the PS Vita, Sony’s certainly on a roll with all these fancy new gadgets.

Now, to the player itself. There are a bunch of features that come with the walkman, synchronized song lyrics, mood sensor, fantastic sound quality and so on, but the one that really got me is the fact that its apparently also iTunes compatible, which will probably be a huge factor for people who are on 1. macs 2. iPhones 3. iPods… basically 90% of the entire world, is what it feels like.

The entire event was apparently photographed on Sony cameras (a nice touch i think), and i’ll post up the official photographs when they’re sent to me!

Once again, thanks Sony Electronics and Kenneth from Waggener Edstrom PR for the invitation 🙂

After the entire event and failing to get ramen thanks to the crowds, Cindy and i went for a relatively late dinner at Manhattan Fish Market. 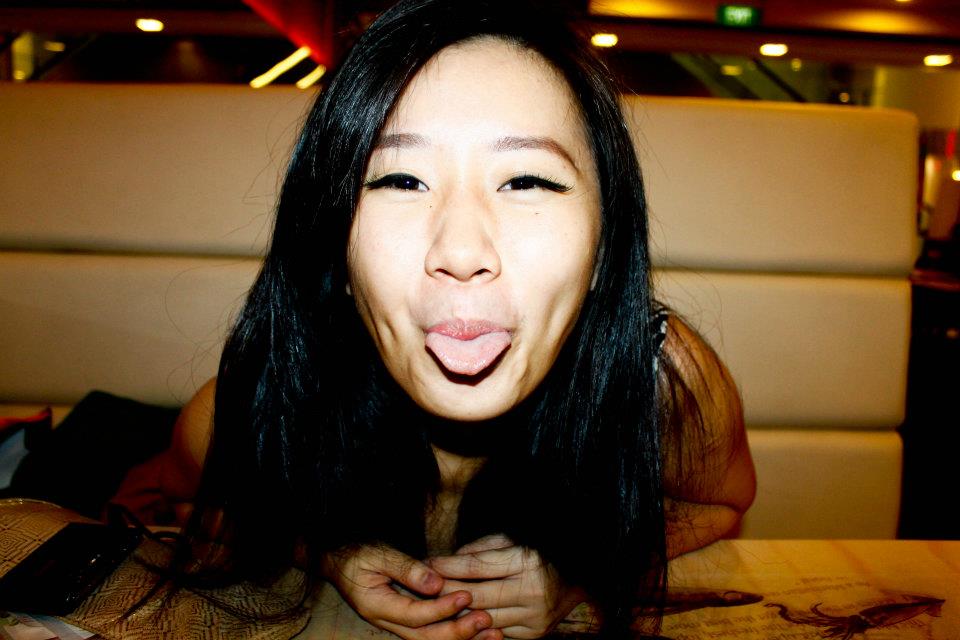 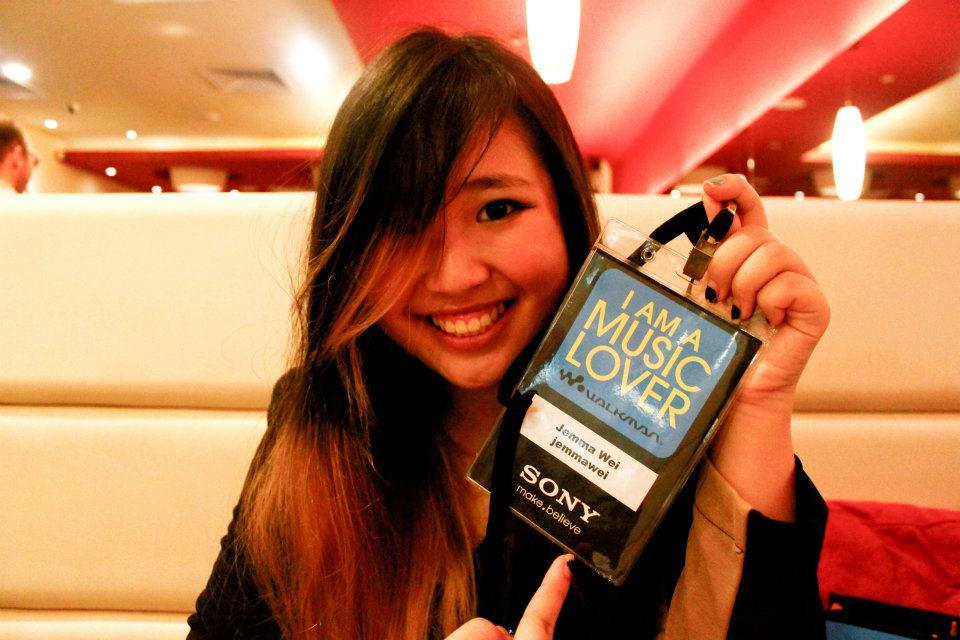 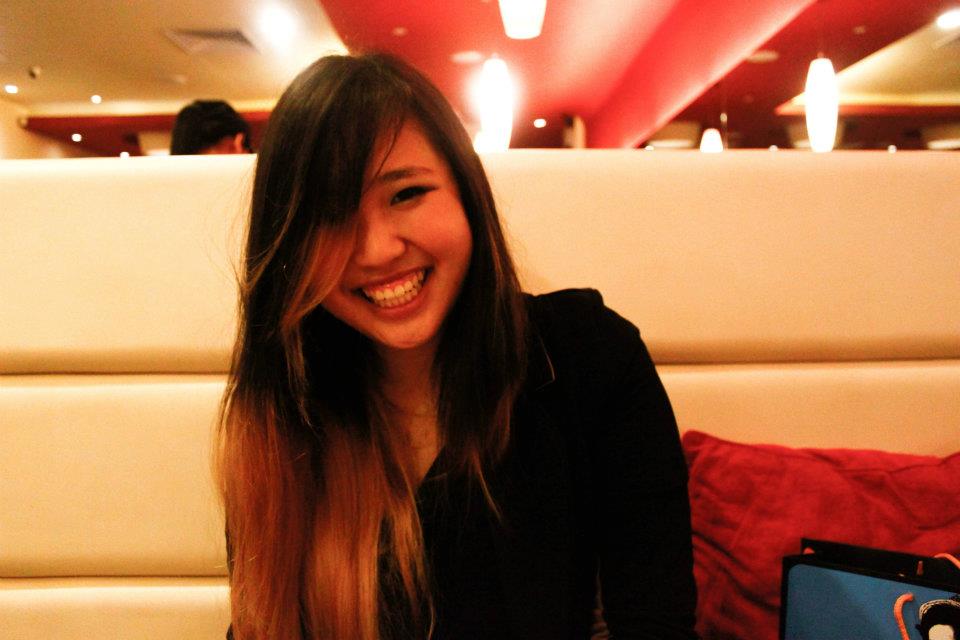 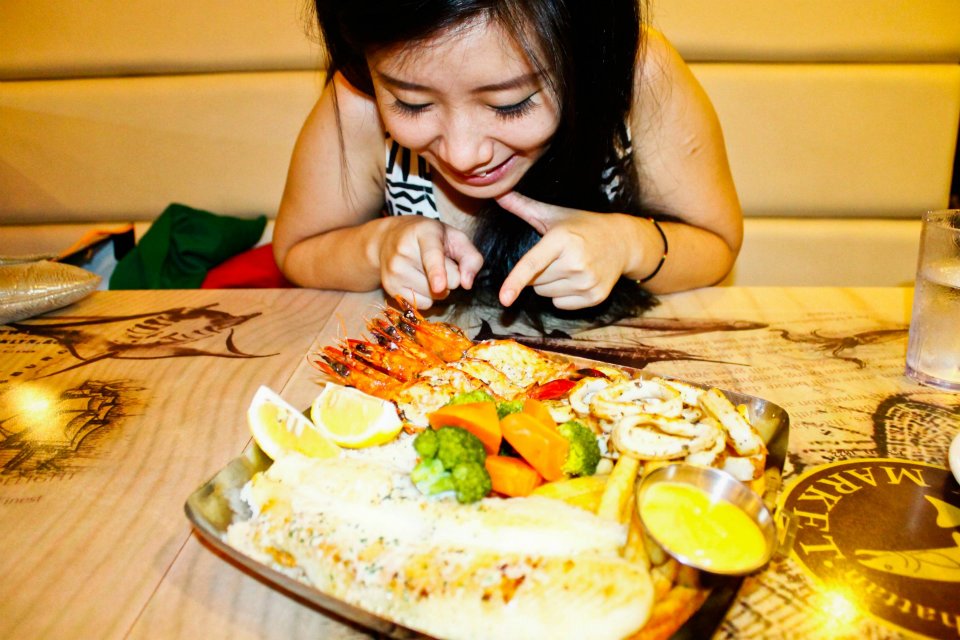 We had the manhattan gala (?) platter or something like that which we almost instantly regretted because it became rapidly obvious that we couldnt finish it between us. Besides, the only seafood i eat is fish, which meant that all the prawns and calamari and what not were Cindy’s burden.. something she wouldn’t stop going on about. 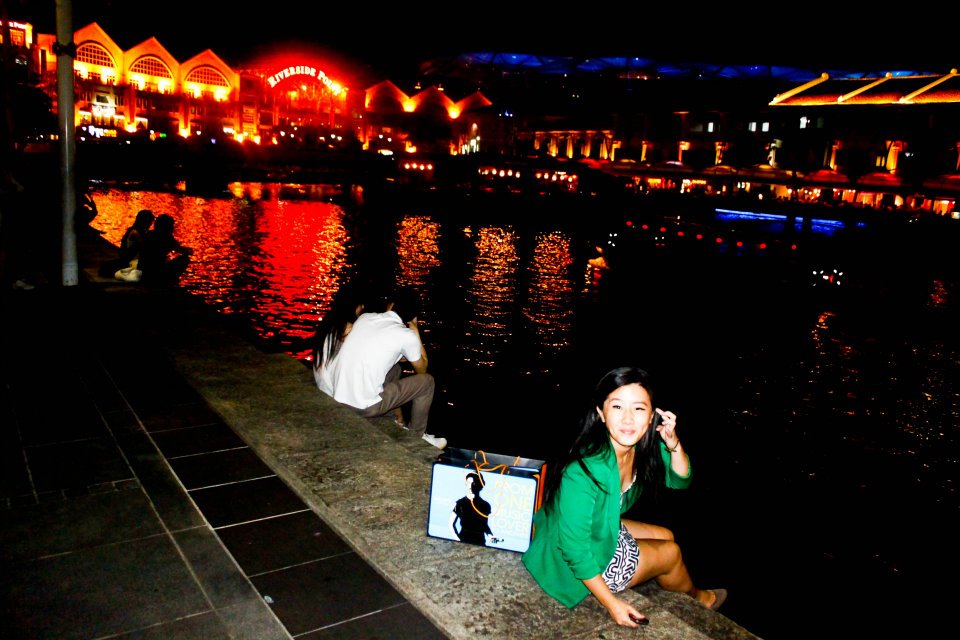 Loving the Singapore night skyline and ever so grateful i work in the area, privy to such scenery on my way home every night. xx

In any case, work these two days have been insane. Insane is good because 1. i am not, instead, bored, and 2. i am actually doing something productive with my time and i receive consistent validation in the form of ‘you must be adequately coherent because here’s more work for you’ and you all know what a sucker i am for validation so obviously i fall in love with my email and microsoft word and immerse myself in nonstop writing.

Despite this, its about seven different levels of exhausting and i am telling you there is no better feeling than coming home to Cat after a long and draining day at work. 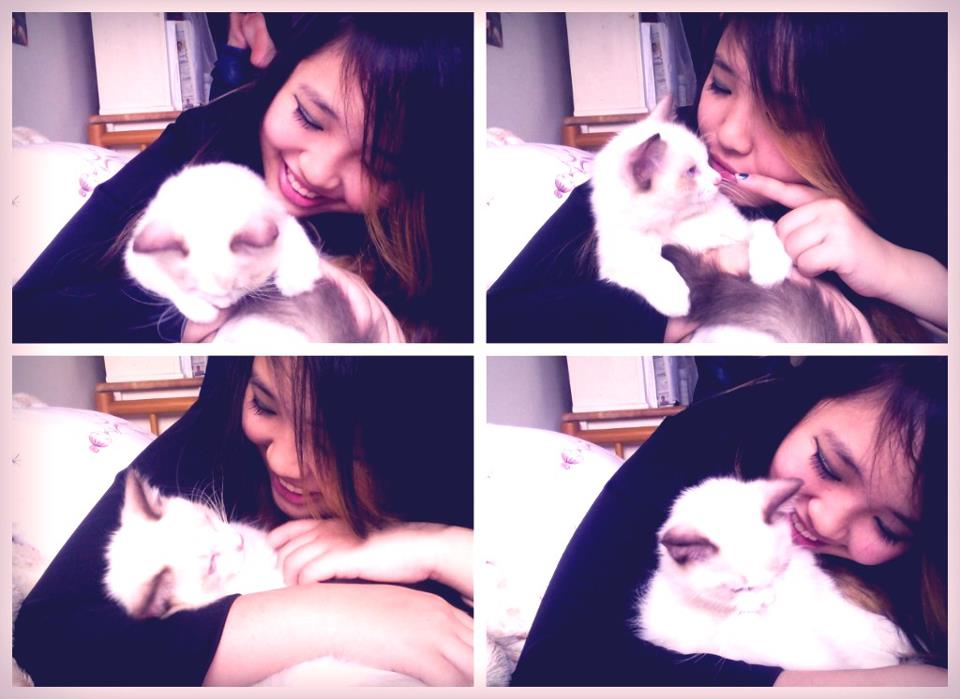 This cat i tell you, incites emotion in me i don’t know how to deal with. She is borderline psychotic and flips around on the floor like a mad fish and it’s difficult as anything to catch her when she goes off like this, but when you do, she goes all soft and floppy in your arms. SO. SOFT. LIKE TAUHUEY. Obviously my ability to draw parallels and accurate imagery has diminished somewhat after the end of year one. Not the point.

And she’s so huggable i just want to hug the meow out of her all day! I don’t quite know how to express this so it usually cumulates into me shouting at her I LOVE YOU!!! I LOVE YOU!!! and her licking her paws and obviously not giving a shit about me.

Yeah. That’s how i roll. I am the epitome of how to express affection in a non awkward manner.

Thanks once again for the wonderful night, Sony! I LOVE YOU!!! I LOVE YOUUU!!! Okay, going to shut up now.