first up i am LOVING this video, A chong showed it to me today and it’s HILARIOUS- really appeals to the litgeek in us all

Animal Farm, Jane Eyre
Barnes & Nobles, Foursquare it
No TV, I read instead
Got lotsa Bills, but not bread
BURROUGHS , GOLDING, SHAKESPEARE — all dead

Anthem for the hell week to come- assignments and deadlines all rolling downhill towards us. I’ve finally finished post processing the pictures taken over the past few days, so full post on Bimbo Chong and Bimbo Chia’s birthday’s after the jump!

and i can safely say she is one of the most difficult kidnapees ever. 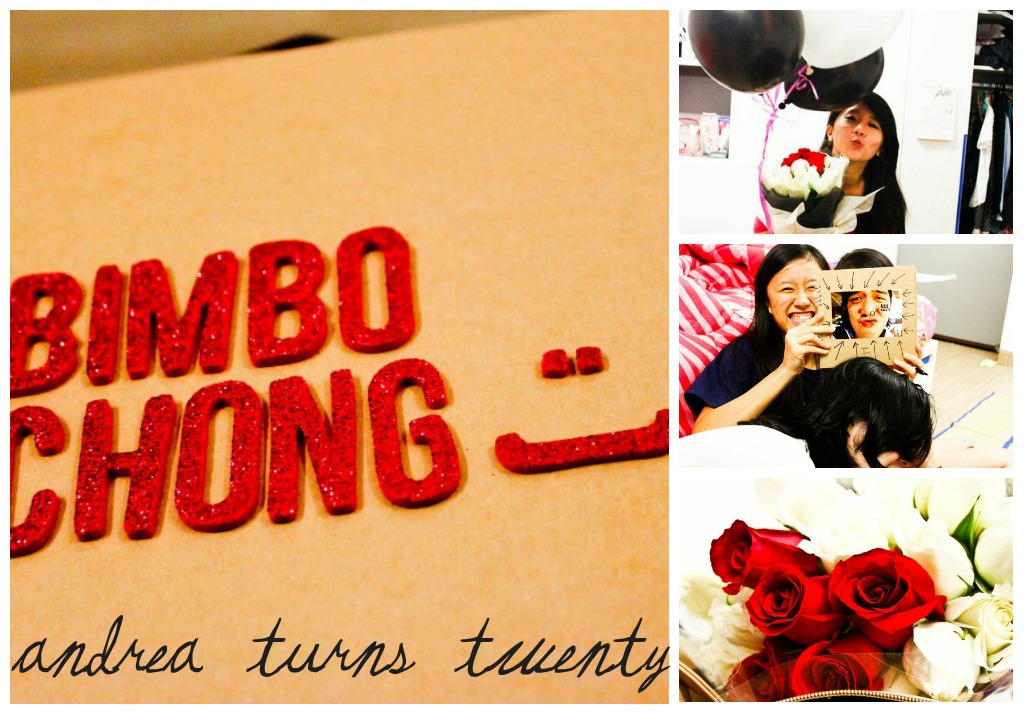 We knew that she suspected a surprise, so we decided to deliberately not hide in her room and let her moan for about an hour in disappointment before bursting in and kidnapping her.

Imran: “you should have seen the look on her face when she walked into the room”

Anyway, Syafiq and I ninjakidnapped her, blindfolded her and stuffed her into the car: and the whole way she was going I CANT TELL WHERE IM GOING and I CANT ESTIMATE MY SURROUNDINGS WITH THIS BLINDFOLD ON and IS THAT A FLASH? (proceeding to smile) (refer to bottom left image)

in the end we got so fed up, Imran just hauled her up and carried her instead of letting her totter around in those heels 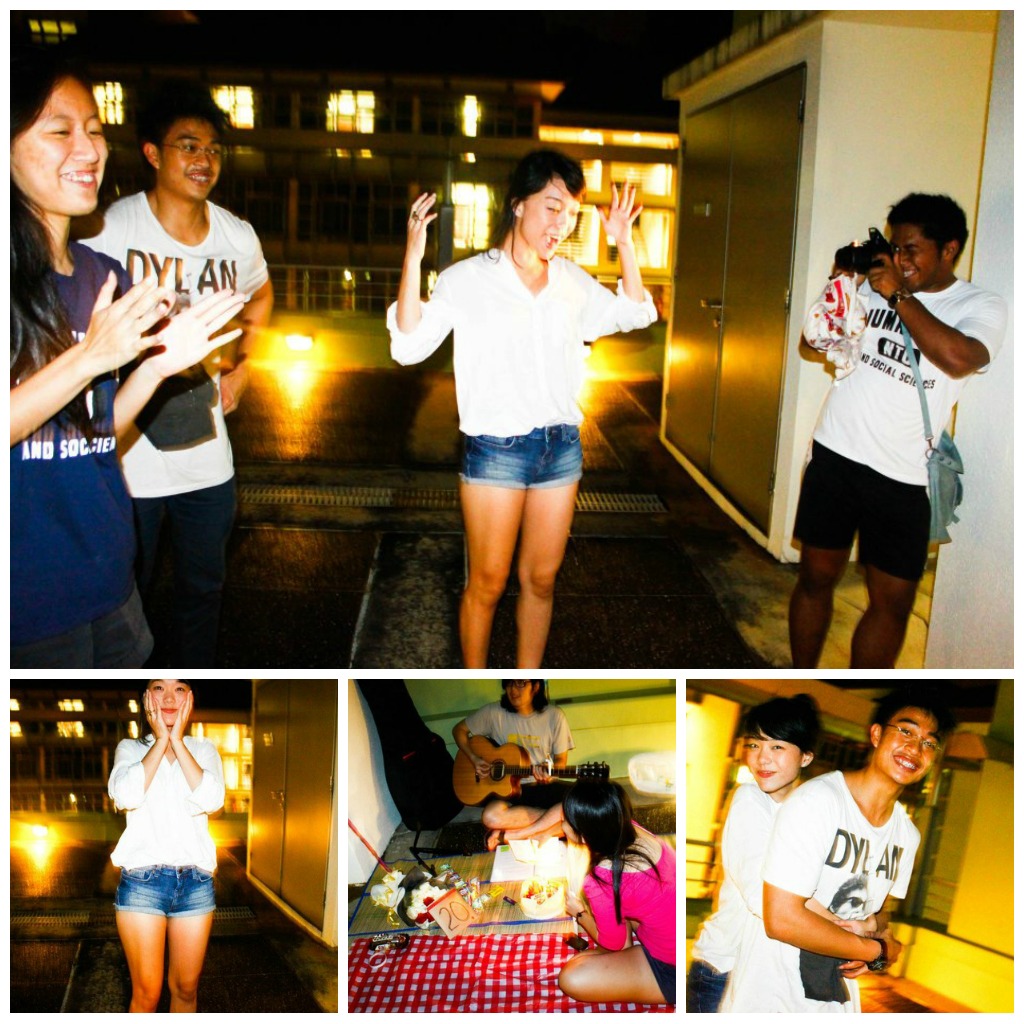 hall 16’s rooftop, obscure enough not to be disturbed yet pretty and under the stars 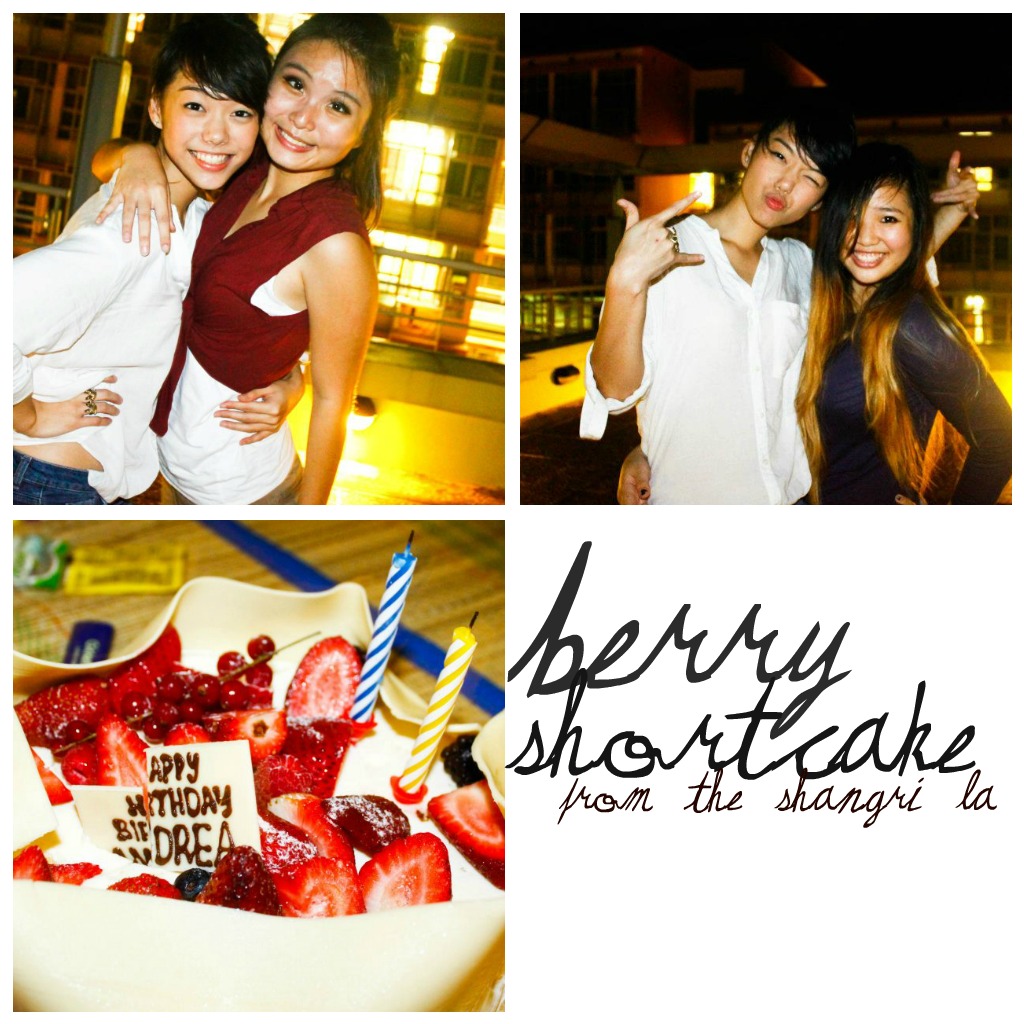 Also, black and white balloons (thought it a fitting coming of age color) and the white roses she has such a bad weakness for. On a separate note, if you want roses keep far away from Exim Arts. 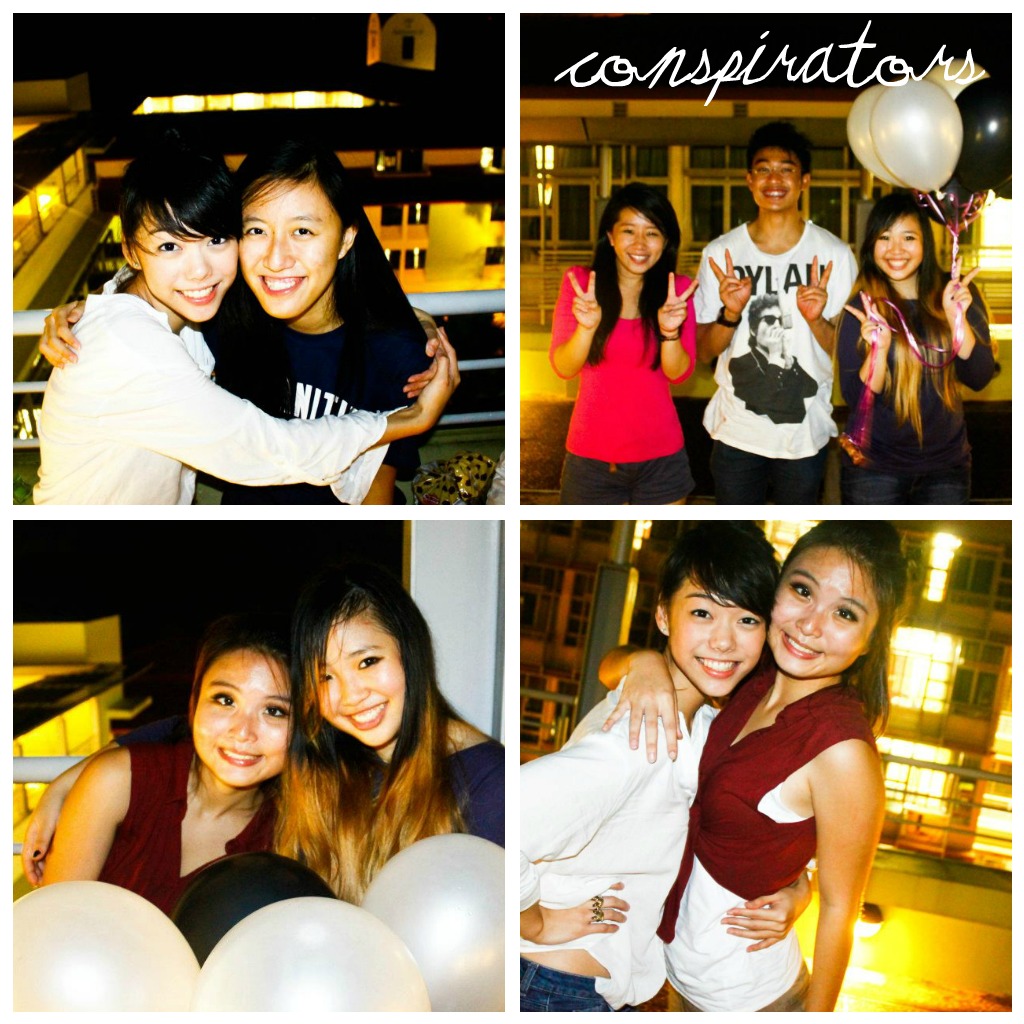 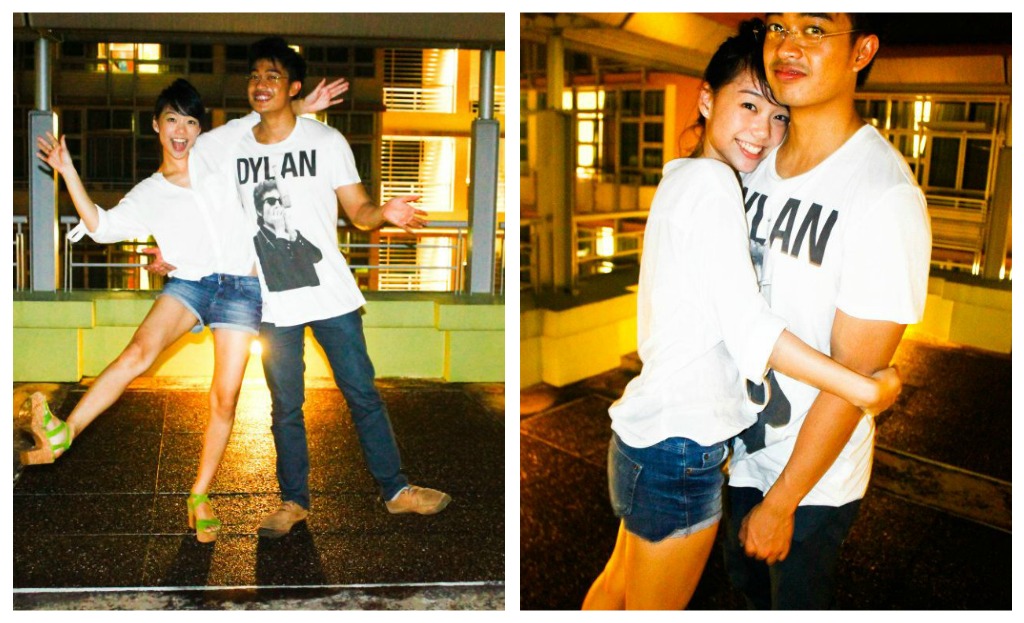 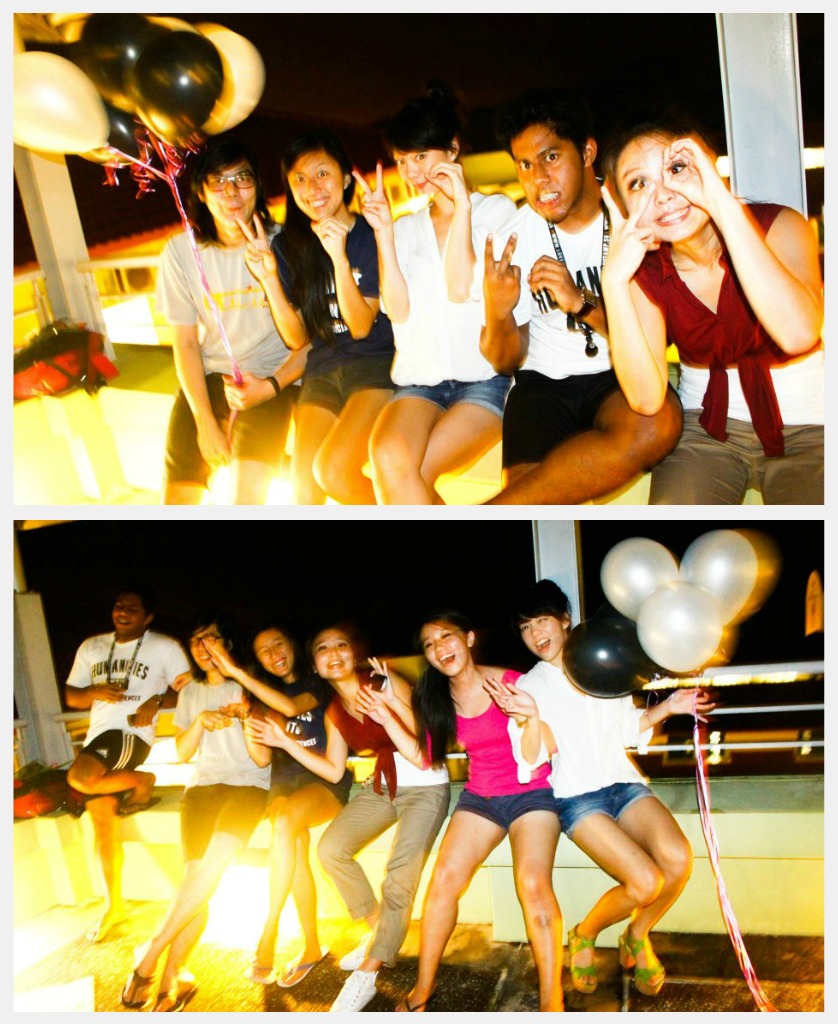 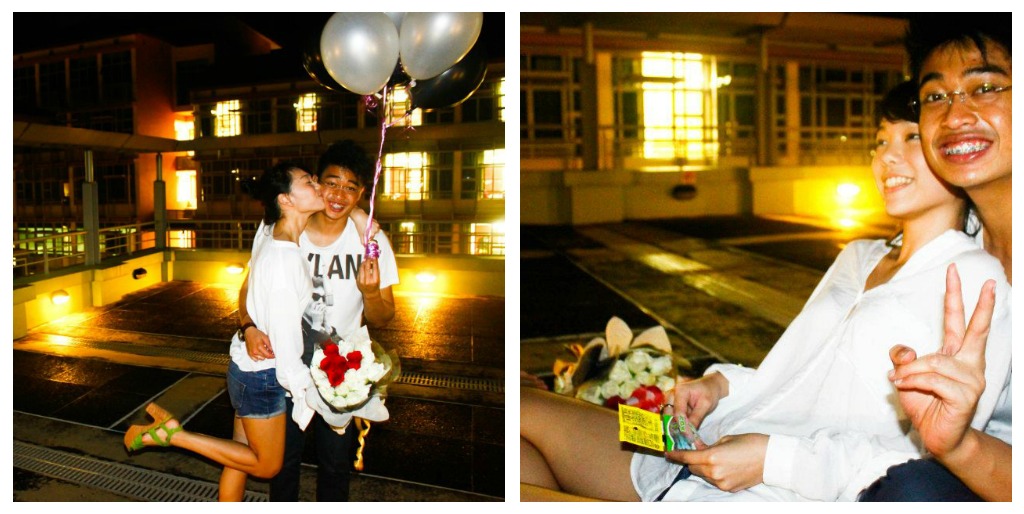 Imran- the boyfriend, who drove and was one third the conspirators for her birthday surprise, the other two thirds comprising cindy and i!

All in all a pretty successful surprise i think, she insists she shed no tears but hands up all who believe her. I thought so.

And the next evening: 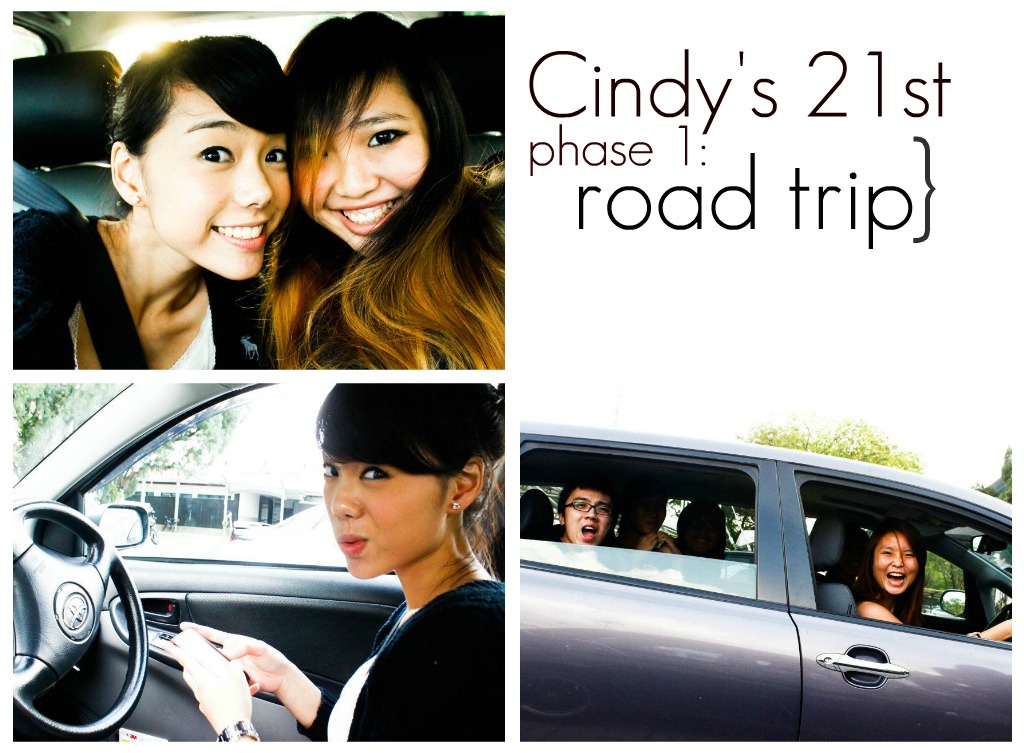 The rationale for this was hilarious. During the planning stages weeks ago, Han and I were skyping and i asked him

What do you think she would like? Something unconventional.

With the help of Shin Fen, we figured out her tuition kid’s address and drove over, waiting downstairs for her to end and come downstairs.

This part was terrible. She was supposed to end at 7 but she decided to be UNCHARACTERISTICALLY hardworking and gave the tuition kid overtime till 7:20, Andrea and i were dying in the void deck panicking and afraid we’d miss her. 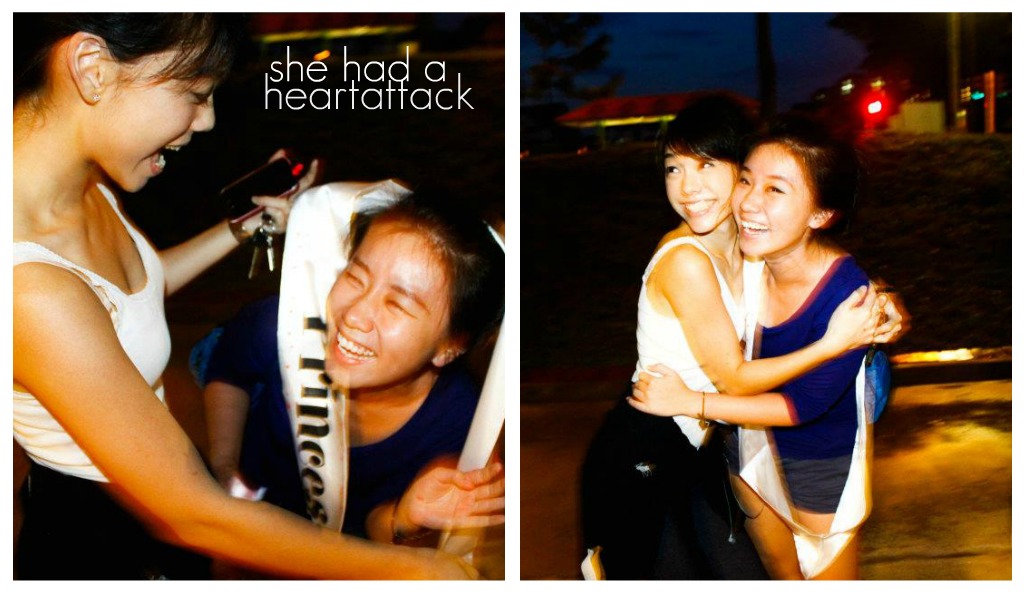 Well anyway finally she came down and andrea JUMPED her and she got such a bad heart attack i swear i thought she was going to hyperventilate! 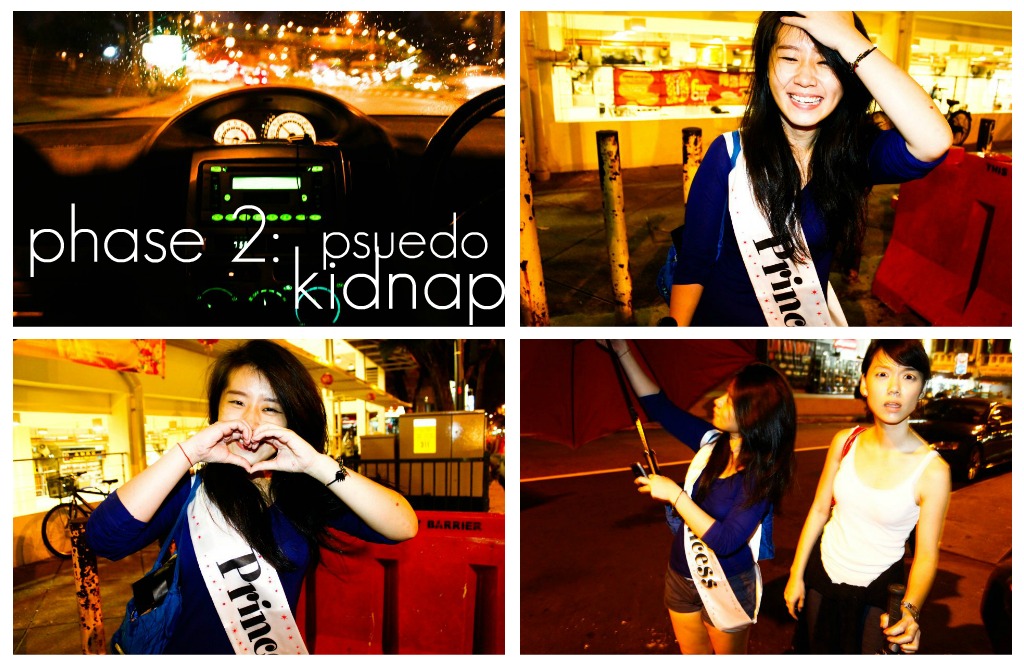 “where are we going” she asked, and i told her “you me and andrea are having a girls night out we’re going for dim sum!!!” and she got so excited

Stop one: Swee Choon Dim Sum
Where she got all excited over the prospect of buns and chinese bite sized edibles
and was
JUMPED again
from the back

AHAHAHAH LOOK AT HER FACE IN FRAME 2 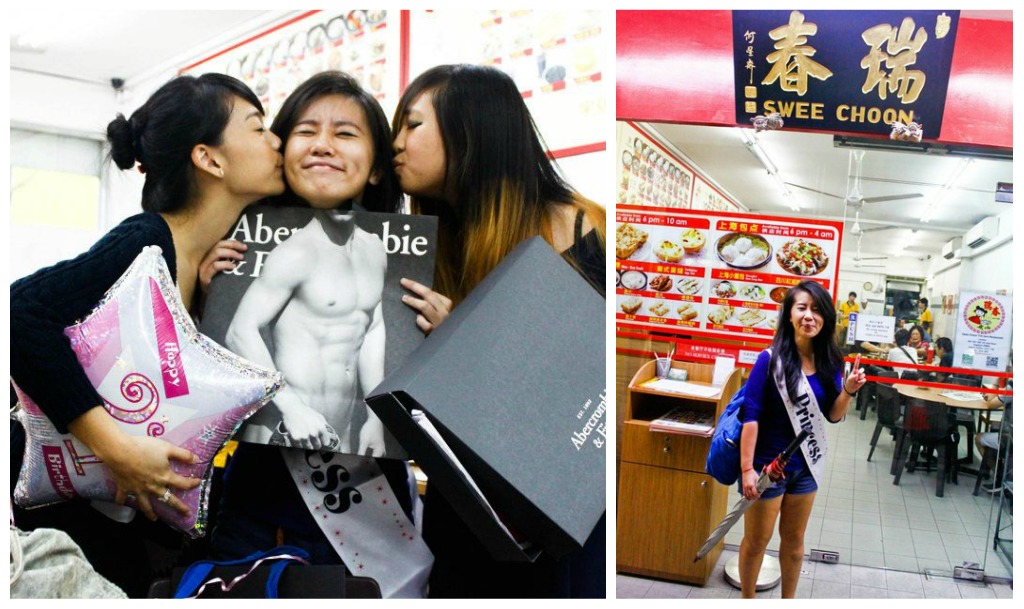 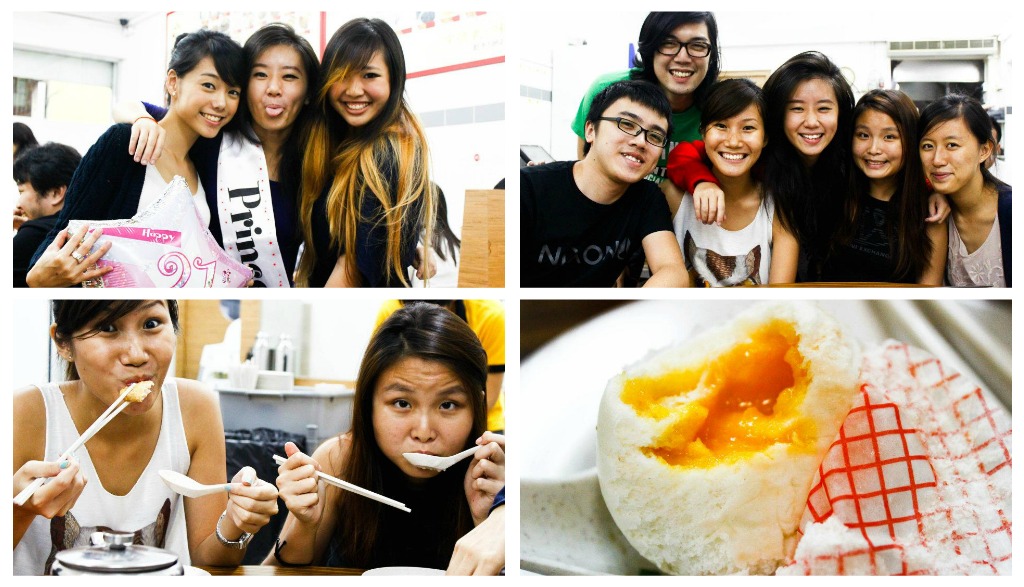 (btw swee choon has amazing dim sum, must trys include the tofu (SPEECHLESS) and custard buns (ITS RUNNY!))

Her 21st gift from all of us: an Abercrombie sweater and a DIY pillow (because she also loves sleep to the extreme) 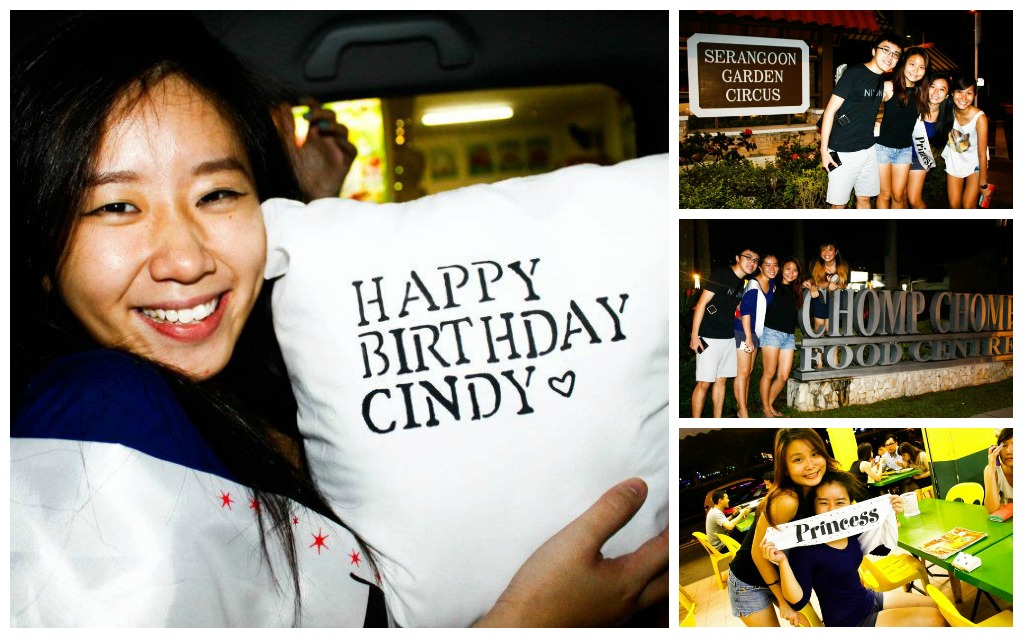 This was my first time there i was super excited 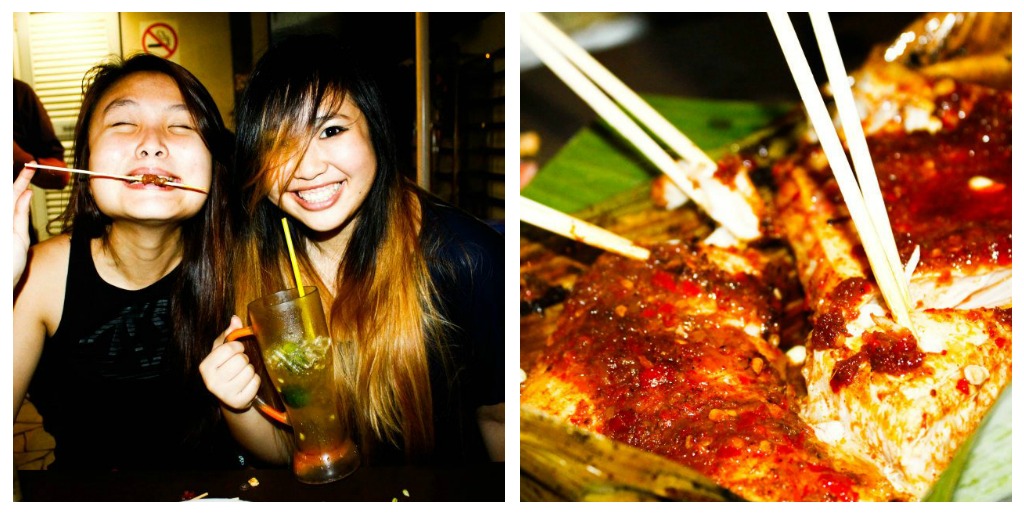 Most of the stuff was spicy though, also i don’t eat seafood besides fish, so i couldnt have much. The things i did try were delish. 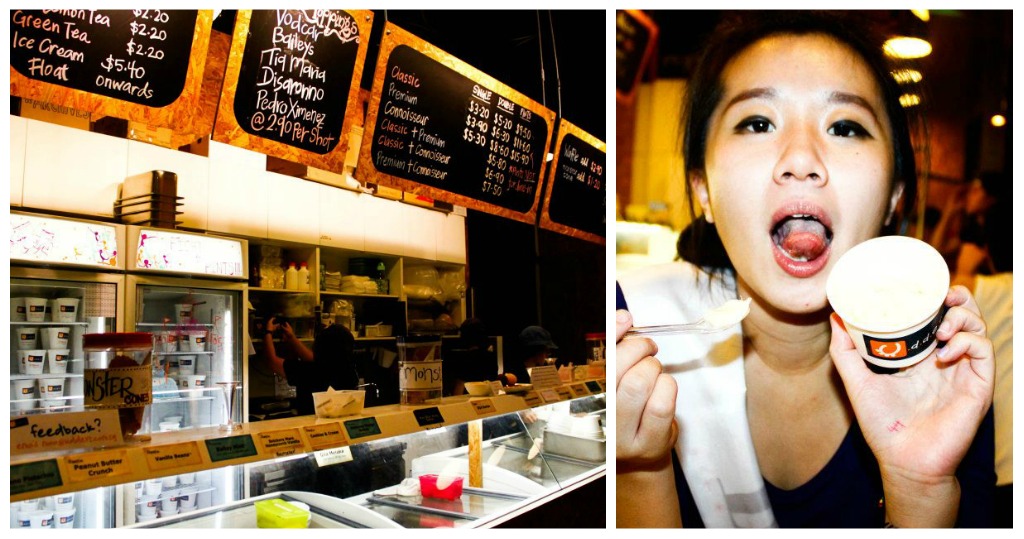 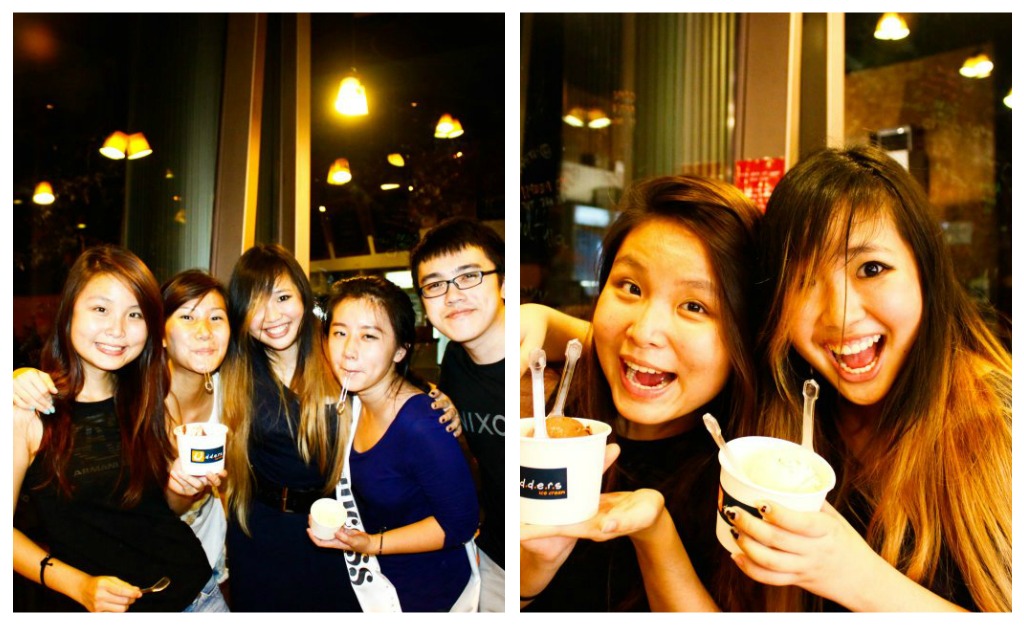 Also my pioneer trip there, starting to feel like i have been MISSING OUT
Everything was so good ohmygoodness
Also, Cindy’s princess sash was attracting a fair bit of attention, which had hilarious results

We got chased out in a bit because Udders was closing, redirected to the rooftop garden 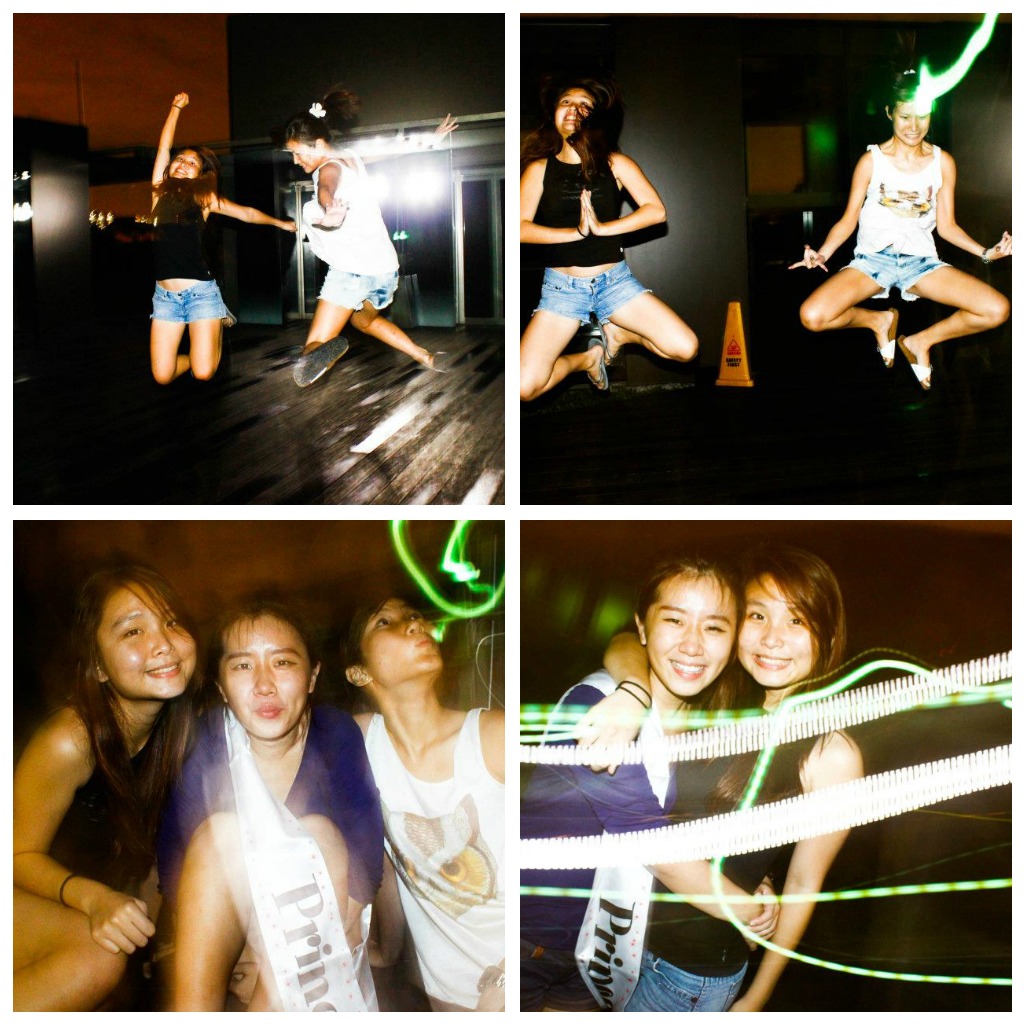 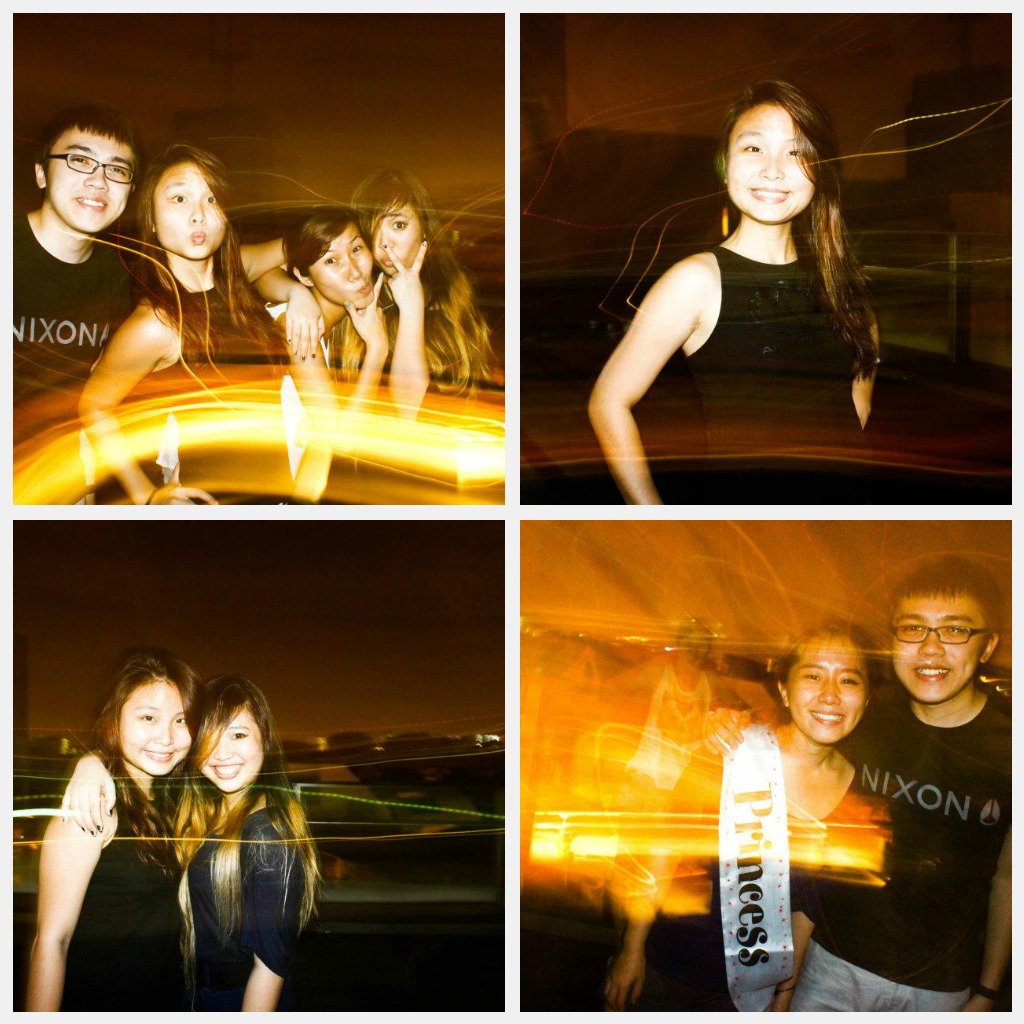 And back to hall with the champion driver sexylexy
Discovering this amazing application called nokia DRIVE on my lumia which functions as a 3D GPS, complete with sultry british lady’s voice telling us to “turn right onto the motorway after a quarter of a mile”
what’s a motorway??? oh right. Thats UK for Highway. 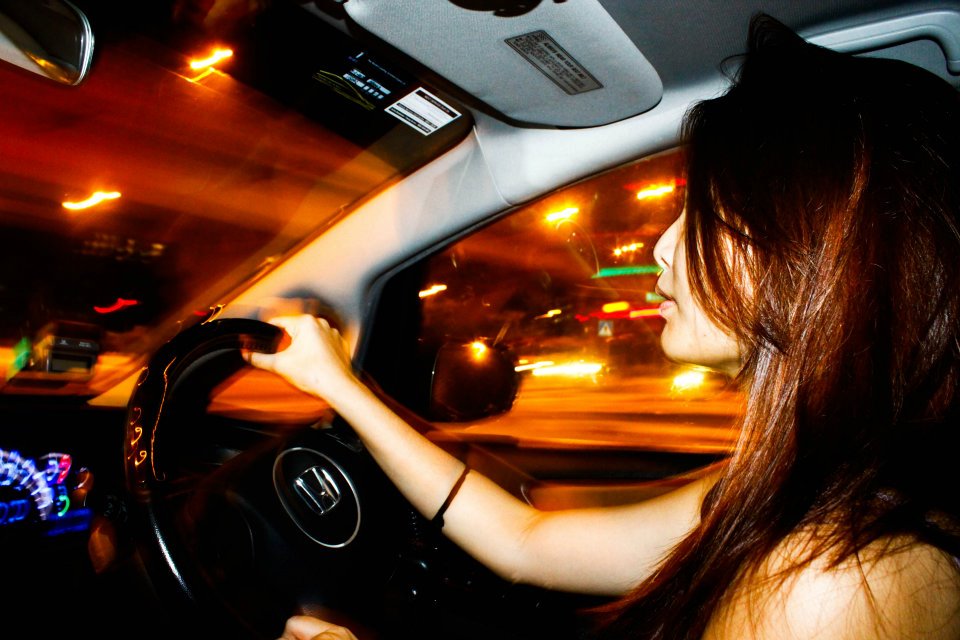 k i obviously got increasingly incoherent towards the end and you’ll have to excuse me, so very tired from the above.

A pretty hectic and lovely few days with the most insane (i say this in the best way possible while remaining very serious, i think they are) people.

Hope you two enjoyed your surprises!
We love you two♥♥