My life has turned into a barrage of bullet points. Thats literally how shit goes down in my brain, when i wake up my thought processes are something like: 1. i hate being awake 2. it is hot 3. eternal struggle between wearing shades to school and looking like a level 99 douche or going all squinty eyed in the morning sun 4. WHY did i stay up so late WHY and 5. IT IS SO HOT WHAT IS UP WITH THE WEATHER. 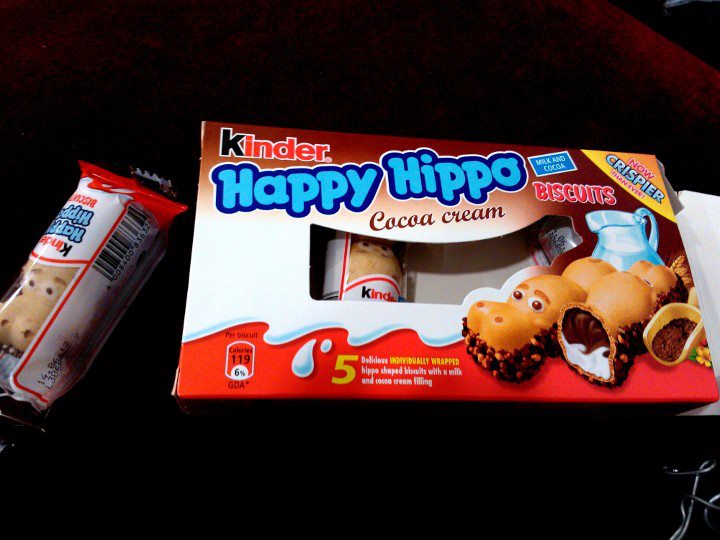 1. Happy Hippos- this has gone viral amongst the literature cohort, i tell you. All started on an innocuous tuesday evening when i ran into Syafiq Hasradcons and he gave me what he promised would be “the best thing i have ever eaten, it is epic i tell you epic” which got me slightly worried that he was high on something. BUT, the rumors are true. THIS STUFF, GUYS, IS THE BOMB. LIKE KINDER BUENO, BUT LESS KINDER AND MORE BUENO.

After which we got more and more and.. well 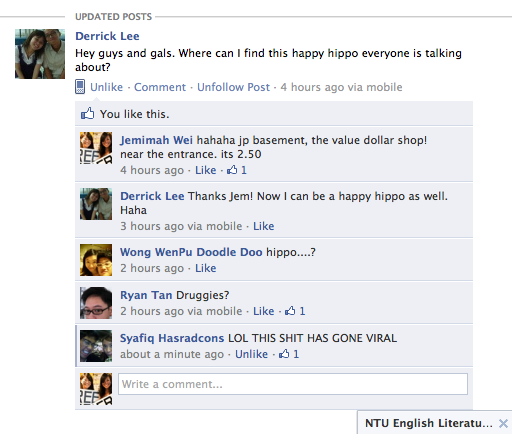 LITERALLY EVERYONE IS ON IT NOW.
two fifty at your local snack shop, guys.
don’t say we didnt share. 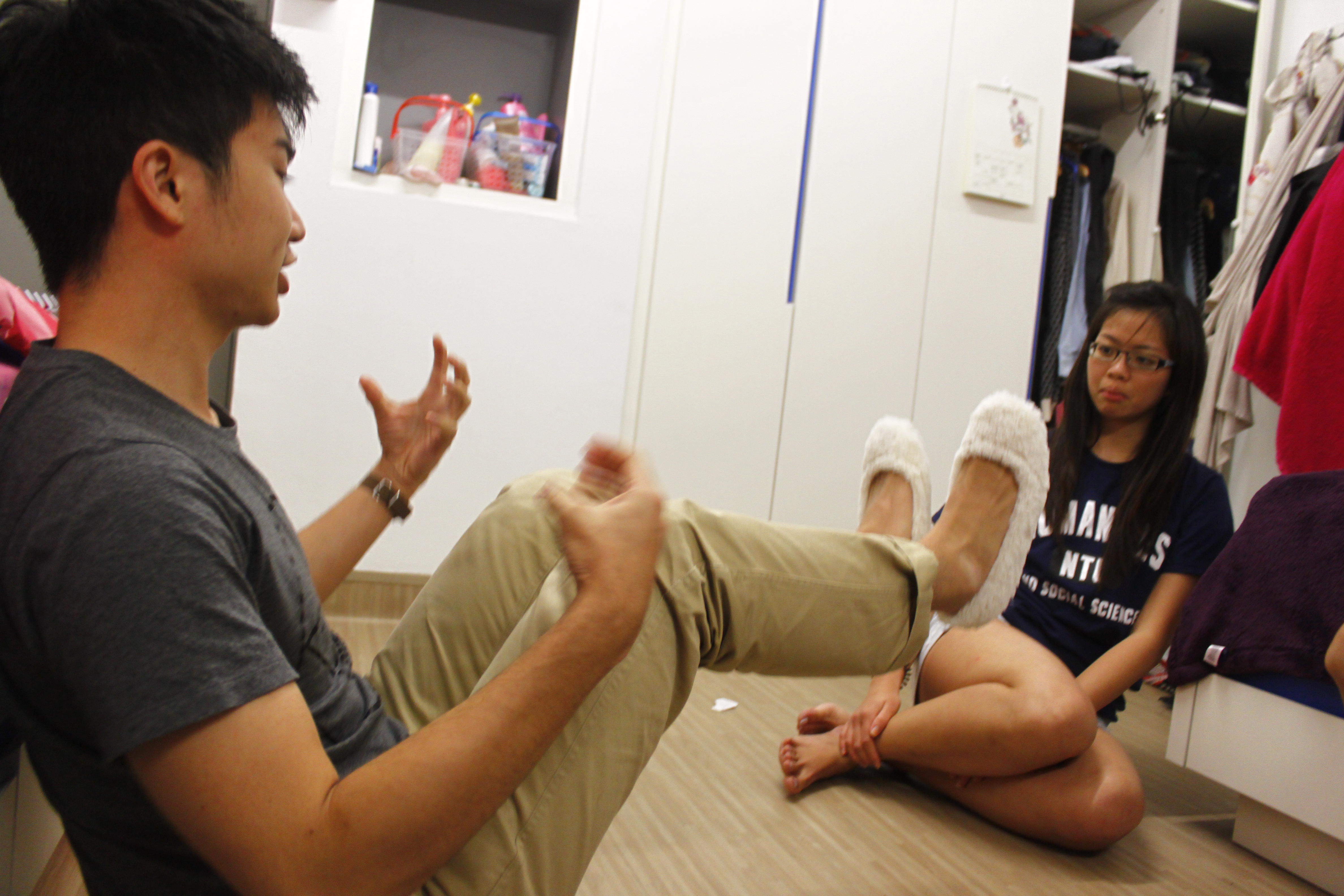 2. The company i keep

include people who terrorize other people with fluffy white bunny slippers. You can totally tell that marcius is channeling his inner Raving Rabbid .Check out the excited hand gestures! Also, Evon’s expression, hee, hee, hee.

Andrea has gone into her ‘hairxperiment’ phase again. This happens ever so often, when she comes to school in some beauty queen hairstyle and makes me photograph it to upload on Facebook. No, this isn’t weird at all.
I know what happens after this. In approximately four days when she gets bored of black shoulder length hair, she will turn to me with a gleam in her eye. I have evidence. 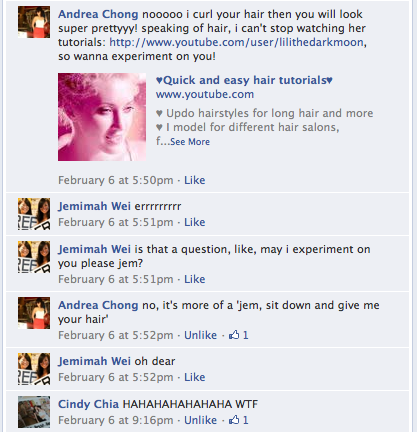 Story of my life. 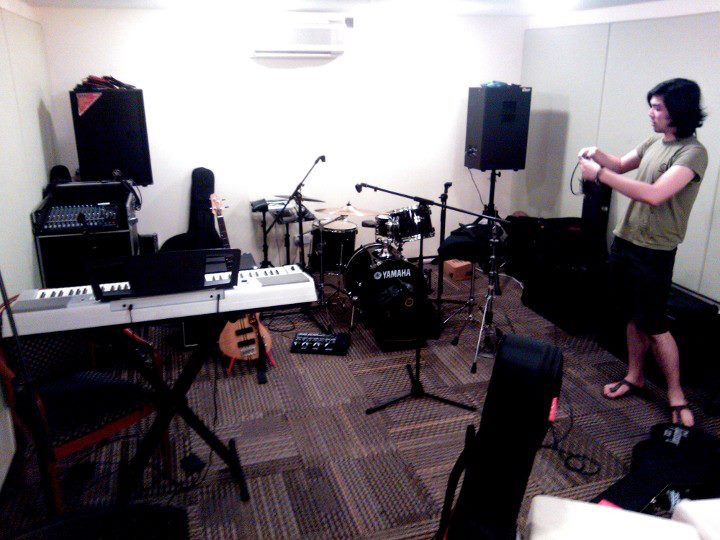 spent most of the week warbling on and off with Marcus and Cindy. We’ll be playing a set tomorrow at __(don’t tell you)__ and our band name is Just Friends. This happened sometime last month when i sang with Marcus for Epiphany’s Black Box Open Mic. 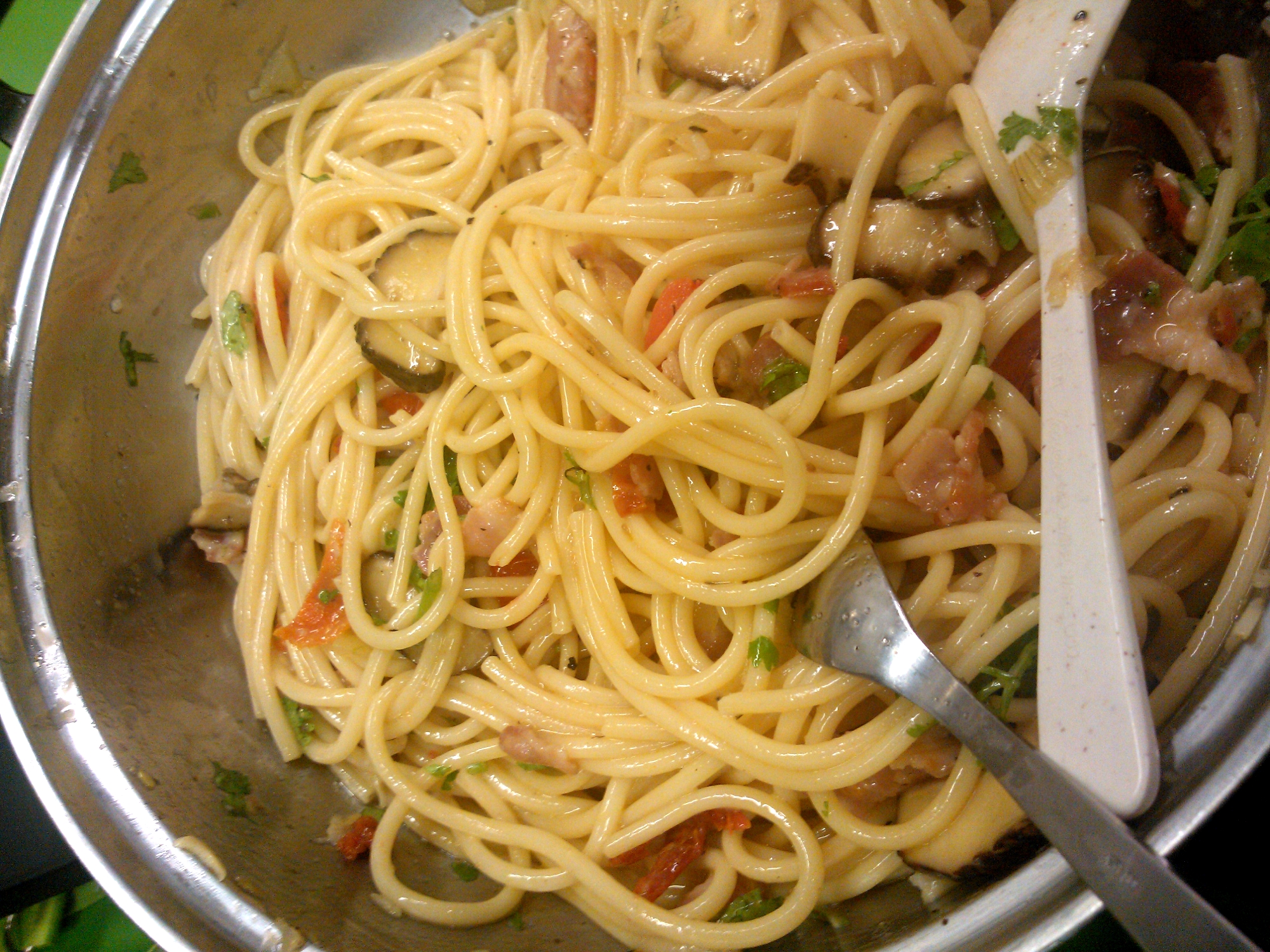 made my first cabonara that wasn’t, you know, just boiled pasta and sauce-from-a-prego-jar! Of course, i had a lot of help, but you know what they say about baby steps. NIGELLA LAWSON, IT IS ON. the next time i make this i will take proper photos and do a step-by-step, its basically a bunch of eggs and lots of other ingredients. I couldn’t possibly be less vague if i tried. 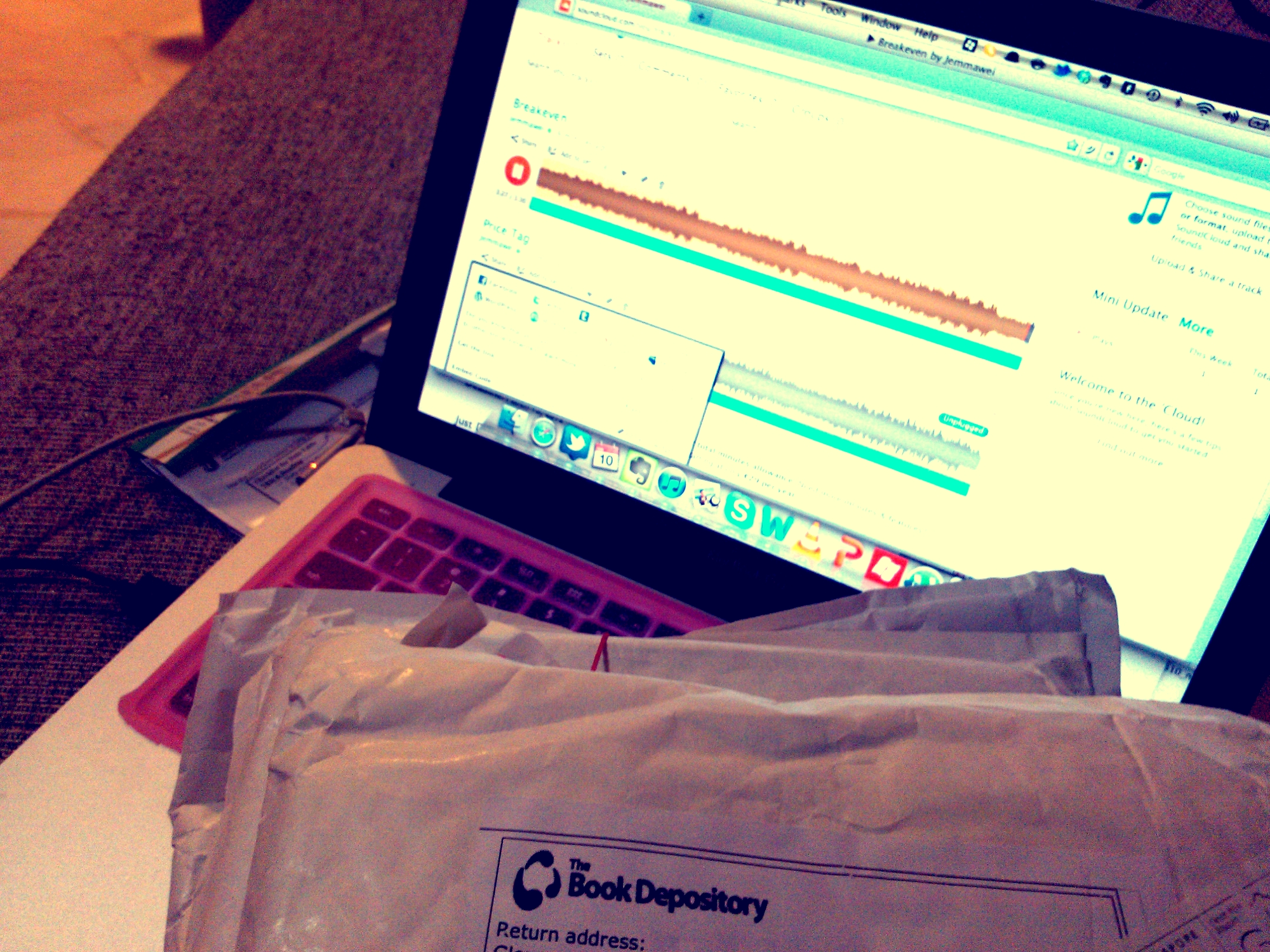 6. Get Your Life Together Attempt #.. never mind. i lost count.

My package from Bookdepository.co is here! I no longer have any excuse to procrastinate starting on my readings. My life is going to be completely organized, responsible, and driven from now on. I am also absolutely convinced of this despite saying it every single time i make a list or buy a book. If my life were an asian disney movie, Mushu would totally start throwing a bitchfit regarding my entire dismal academic life, ie. DISHONOR ON YOUR ANCESTORS, DISHONOR ON YOUR COW, DISHONOR ON YOUR FAMILY, etc etc etc. 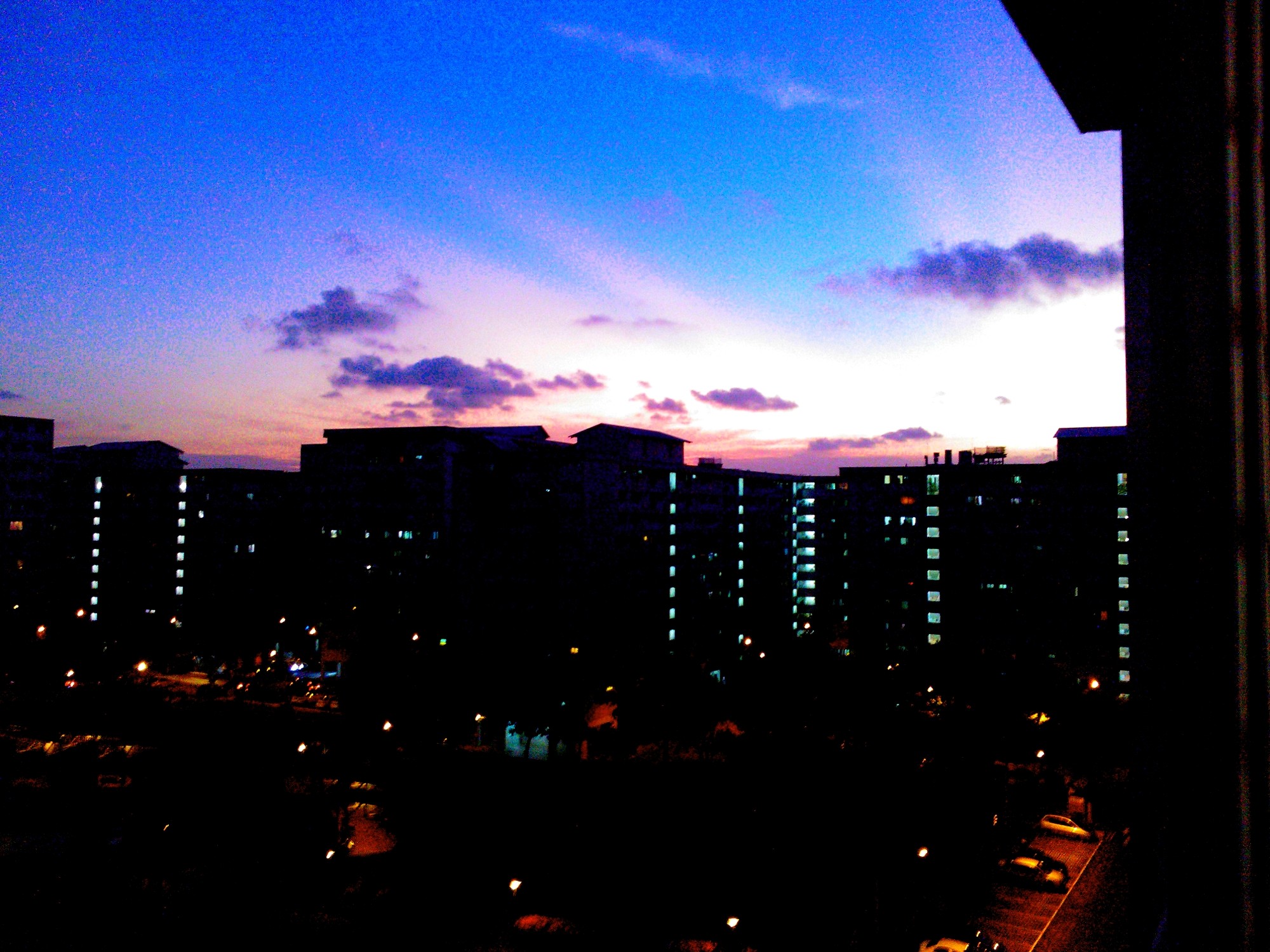 7. Back where all my homies at

IN THE EAST, Y’ALL. Every week the two hour journey back is excruciating. Being at home is ok. Being in school is ok. Traveling is not ok. I sort of just concuss the entire green line home, and more often than not i end up forgetting to get off and letting the train bounce back and when i wake up.. i don’t even want to think about it. Person who invented the modern public transport system, could you hurry with that teleportation machine PLZ?

I also googled two of the most important people in my life this week:

1.Willis Carrier, inventor of the Aircon. Undoubtedly the most important person in my life I LUV YOU WILLIS CARRIER even if you are dead about sixty years now.
2.Larry Page and Sergey Brin, inventors of our friend Google.com. what would all the students do without you.

do not like hatin on people, but here are some people i really do not like, whom i have also googled:

1.Lamar S. Smith, the dude who introduced SOPA. Because, you know, SOPA was totally trying to restrict free knowledge which should be accessible to everyone. Also because they shut down Megaupload and it is way more troublesome to access the latest episodes of How i met your mother now. But mostly because they’re trying to restrict free knowledge.

This post is WAY too wordy. There are too many words in my head. It is horrific. Other life goals achieved this week include not spontaneously combusting under the sun. I believe i have mentioned the weather at least three times in this post but i cannot help it, it is the NUMBER ONE thing that assaults me every single morning and if i ever migrate iluvyou singapore but you know its because of the weather. Also i just realized this morning that i have a voice presentation next week so apologies in advance to all neighbors if you hear someone screeching at 4am in the morning.

What is my life coming to.