Currently listening to:Impossible by The Shout Out Louds
Status:SO TIRED. 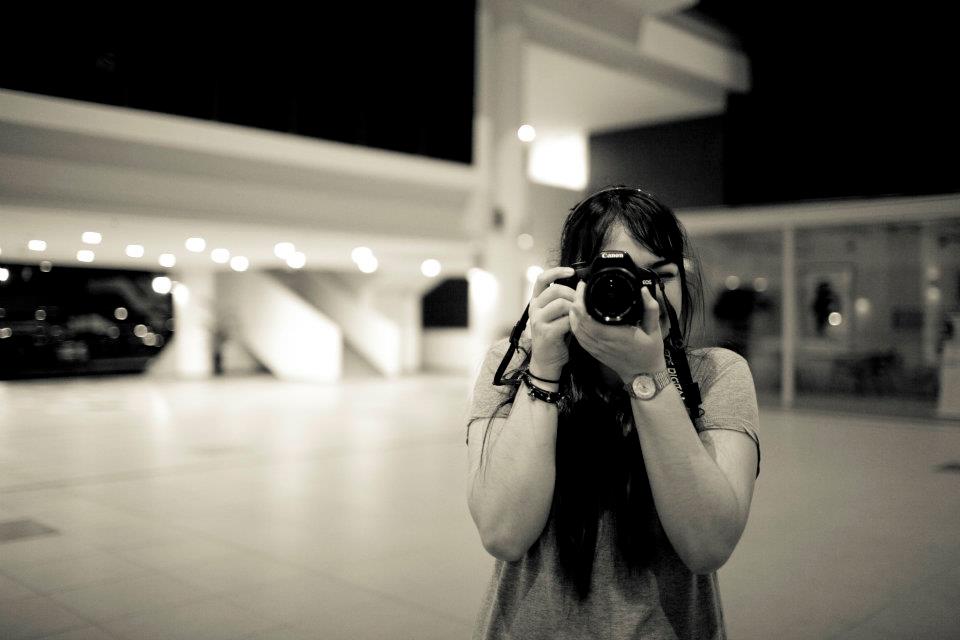 Hi everyone
i disappear rather spectacularly, if i do say so myself
anyway, sorry for the sudden absence on le blog, life has swallowed me whole and spat me out. on request, here’s a (very long) chronicle of my entire past school week which was really kind of hilarious on hindsight but when it was actually happening to me.. not so much.

MONDAY
woke up late, it was STORMING and i did not want Unicorn/my bag to get wet so i cabbed to school (from hall, this is a very bad habit, i need to kick it) and it was the WORST CAB RIDE OF MY LIFE ok THE WORST

i got into the cab and informed him gravely that i was running very late and he said OK and went at 10km/hr this is a true story i looked at the meter thingy.
UNCLE, i said, I AM RUNNING LATE CAN WE PLEASE SPEED UP
OK, he said, and we went at 30km/h

that wasn’t even the worst part. when we were nearing HSS, 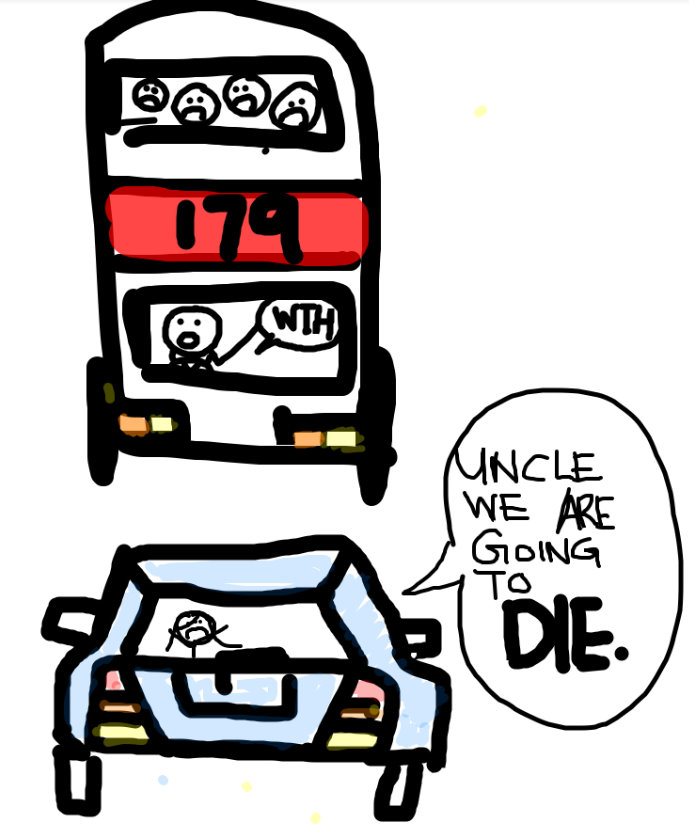 HE TURNED THE WRONG WAY ON A ONE WAY LANE.
WITH A BUS COMING STRAIGHT AT US. 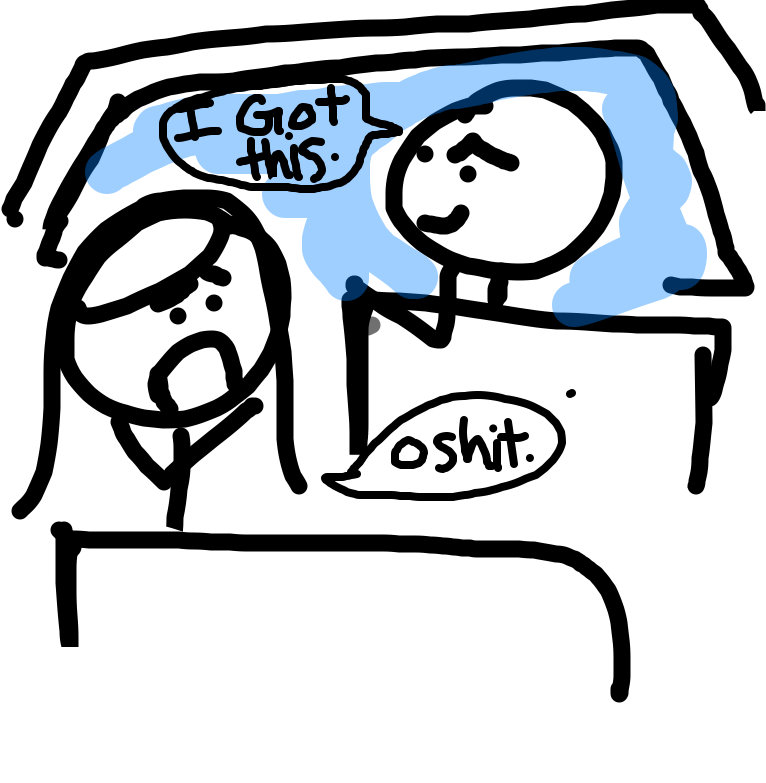 he did not “got this”. i almost died.

finally when we pulled into the school he turned around and said SORRY girl i am a new driver ha ha, i wanted to bang my head against the chair, and shout this is not happening WAKE UP NOW JEMIMAH but no such luck.

so i went to school and blah, lectures were interesting, lunch time i decided this is bad i am so tired i went to buy some coffee and in the queue i saw one of my friends from lit so i yelled HELLO
and he ignored me.
HELLO!!
still ignored me.
so i did the logical thing and stuck my head in front of his face and yelled HELLO!!!! (yes inclusive of all those exclamation marks use your imagination)
and he said blankly who are you

are you kidding me, i said, we had lunch together with amirah and justin last week!
no, seriously, who are you?
IM IN YOUR CLASS
oh. OH. no you got the wrong guy that’s my twin brother
affronted, i went: YOU FORGET MY NAME THEN ANYHOW MAKE UP A TWIN BROTHER RIGHT
and i kept (confidently) insisting it was him until he took out his IC to shut me up

TUESDAY
SO MANY wake up calls thank you guys, i reached class on time to the surprise of my tutor and the general public inclusive of self, drank a LOT of coffee, my coffee consumption has risen considerably with the introduction of STARBUCKS@NTU oh well. 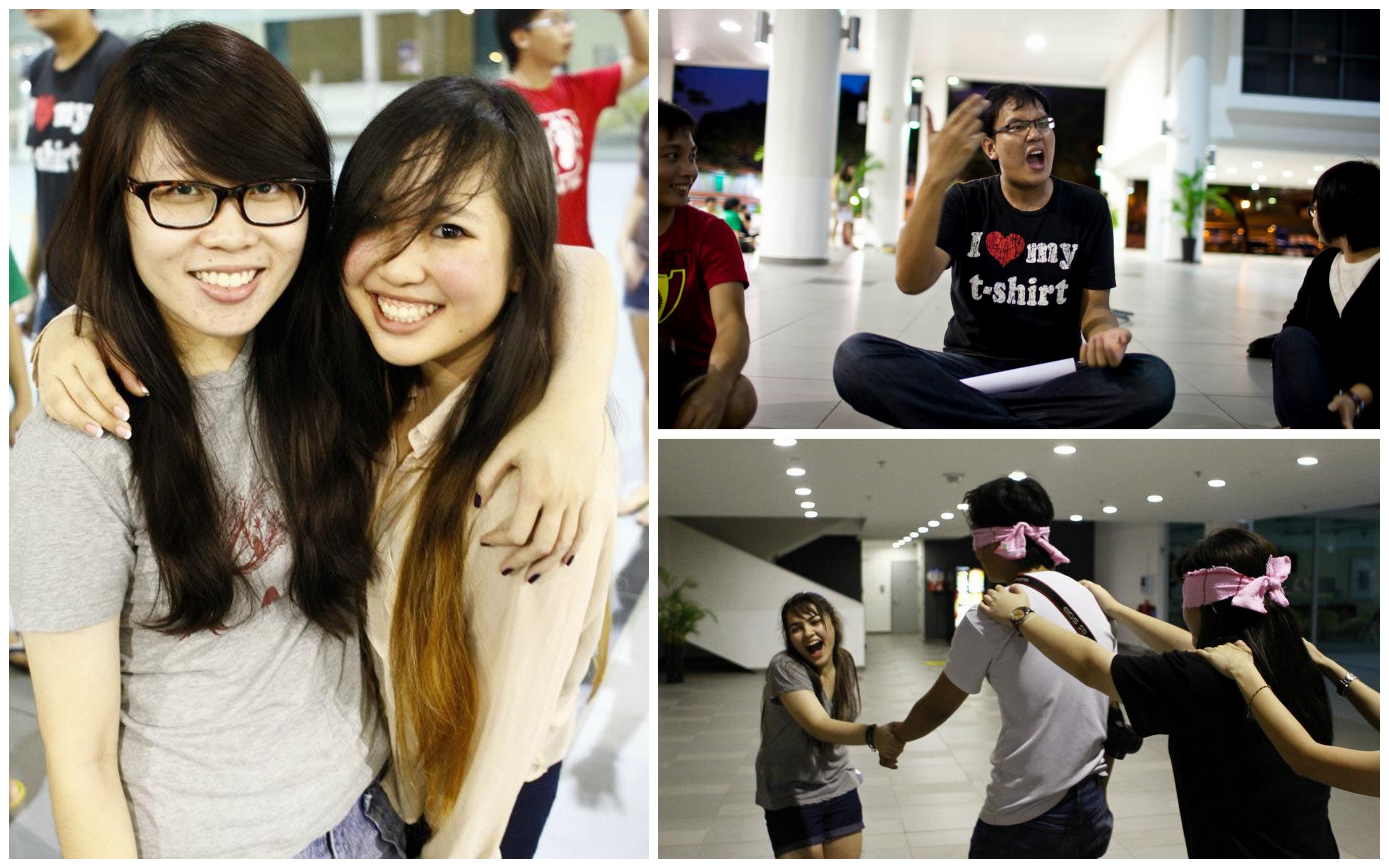 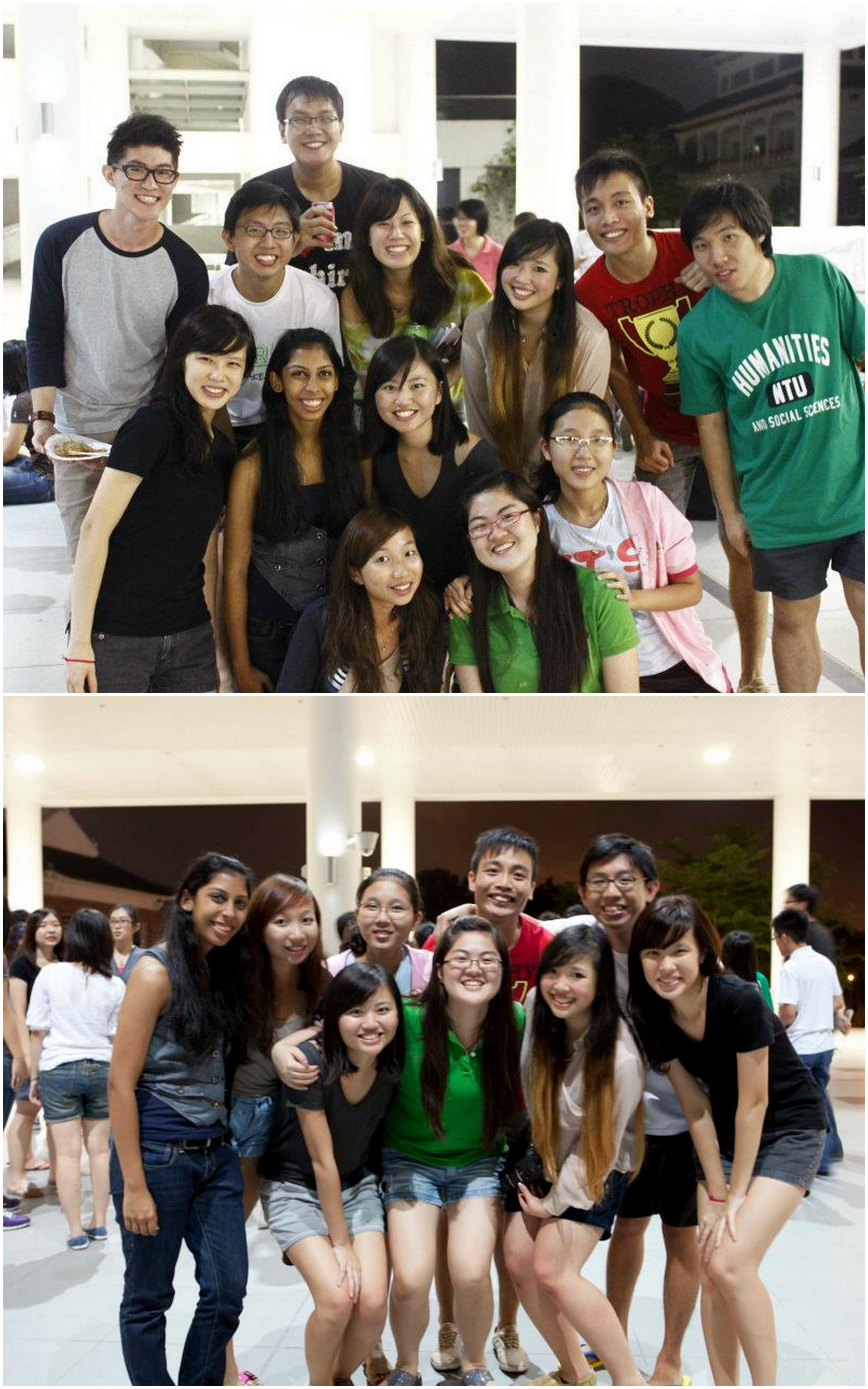 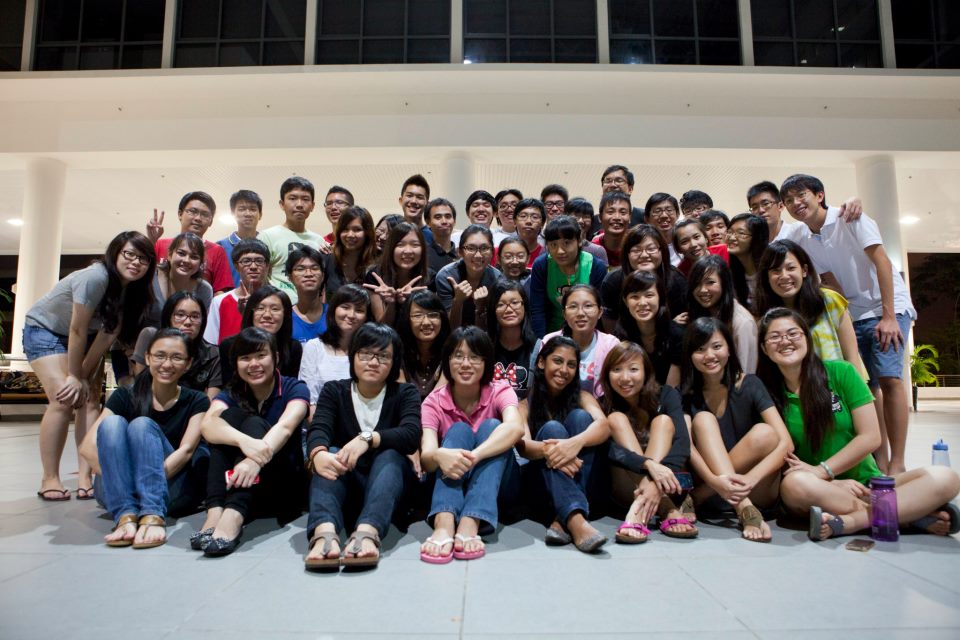 it was also Subcom cohesion bonding day which was a roaring success, my socialites (yes that is what i call them cool or what) are too adorable to be true

highlight of the night was during telephone charades, when the slated act was Calendar Girl and Kian Yan confusedly acted out what he thought was a flamboyant girly pose, as it went on we watched as it transformed and exaggerated till it reached the last girl, who tentatively called out her guess:

BAM. night made, right there.
hilarious.

after sitting in the HSS foyer until about 1+ am with some of the MMC and taking a nice breezy walk back i realized upon reaching my hall that I LEFT MY MAC BOOK IN THE HSS BUILDING i almost died and had to run back with ziting i am quite sure it took off about.. five years of my life.

my heart, it cannot take this kind of shock.

WEDNESDAY
i woke up exhausted thanks to the previous night’s drama but key words: I woke up, all credit to Xinyi and Syafiq for my wake up calls.
so tired i walked right into canteen B and shouted I WANT COFFEE NOW, the boy eating bee hoon in front of me visibly jumped

went down to town to meet Ranice (and also, uh, shop.) 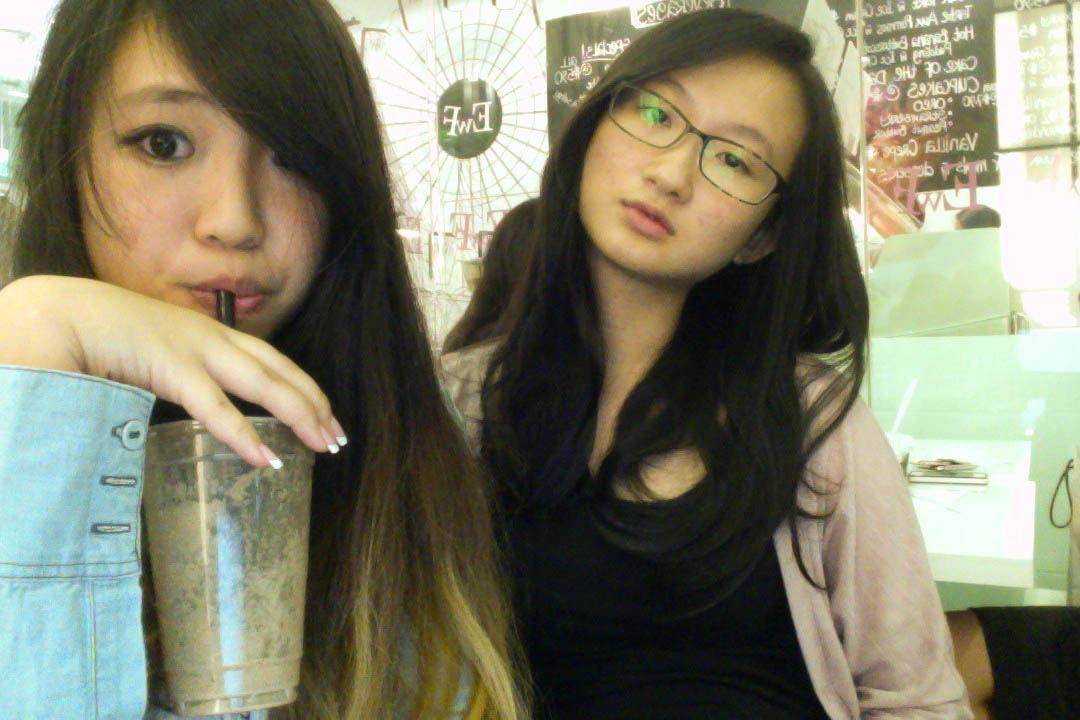 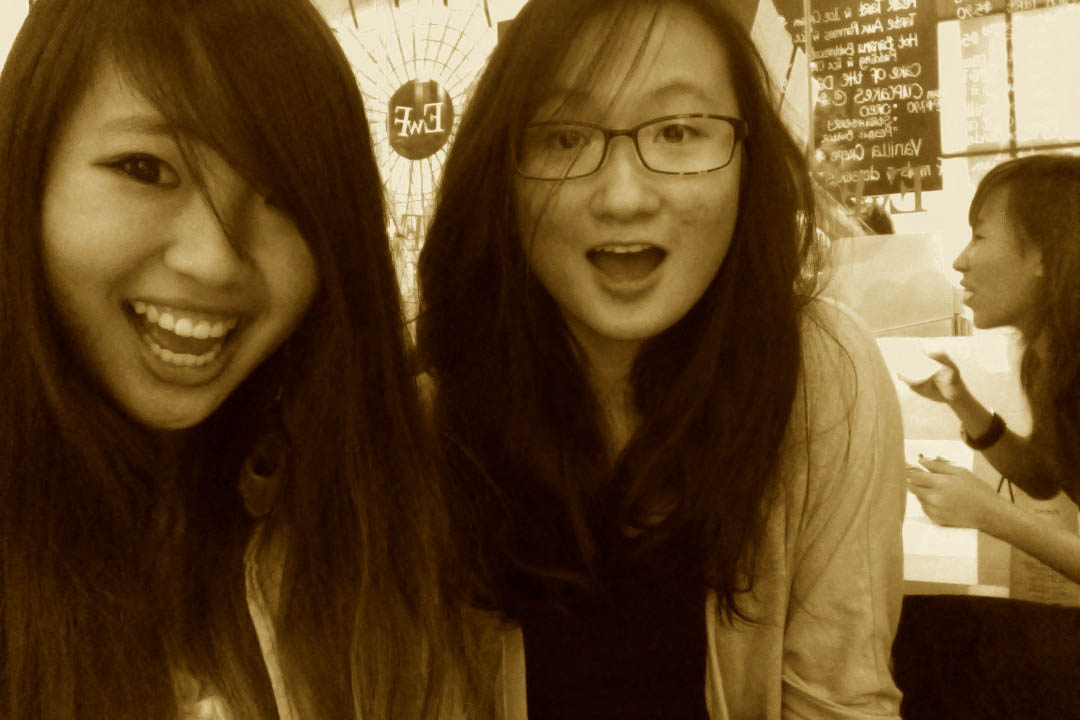 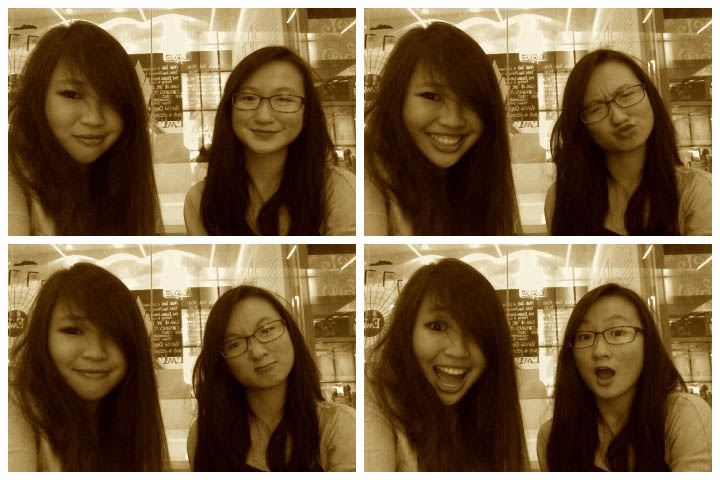 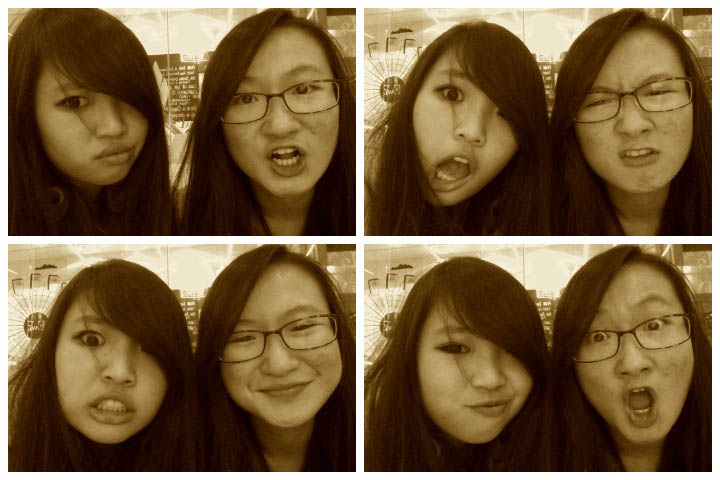 after taking like 187 photos on photobooth my anglican high school junior tweeted me to to say HI I AM HERE AT EWF TOO ergo i had been shamelessly cavorting in front of the camera with ranice much to the amusement of my junior sigh.

yes well anyway i do need to start remembering that i live in the west now because i took two consecutive wrong trains back to school i would be all confident and go, GREEN LINE IN THE JOO KOON DIRECTION JEMIMAH OK, and then when a train arrived i would be all excited and rush in and ten minutes later realize i was not in fact, in the correct train. or train line.

re-orientating yourself in city hall interchange after 19 years of traveling to the east is very confusing.

THURSDAY
woke up early again (I AM ON A ROLL HERE GUYS CONGRATULATE ME QUICK) and went down to Raffles for a meeting before rushing back for lecture. I WAS SO TIRED and when i am tired i become either

a. extremely cranky and zombie like
or
b. extremely amused at everything

as much as (B) sounds preferable to (A), let me tell you that from experience (B) is far, far worse. i evolve into this freaking annoying creature and laugh at everything even my own jokes which are probably not even coherent (tired ok what you want) and I GET SO DAMN ANNOYING I WANT TO SLAP MYSELF, EXCEPT I DONT LIKE PAIN.

syafiq tried to buy this new drink (Fanta) from the vending machine and i burst into song immediately IS THIS THE REAL LIFE???? OR IS THIS JUST FANTA- SEA????
and couldn’t stop laughing after that in a self-congratulatory manner.
i really think he wanted to slap me.

See what i mean. 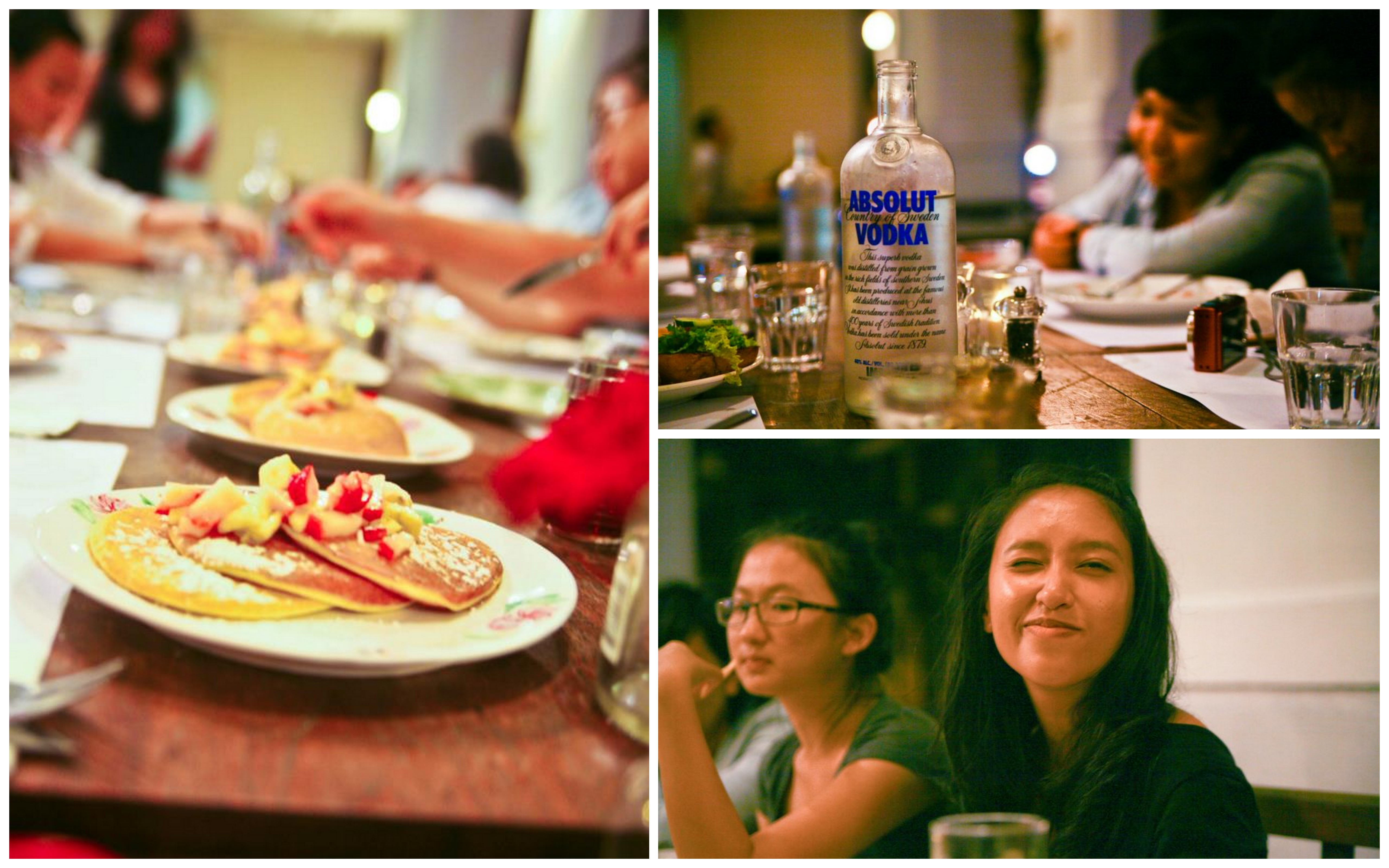 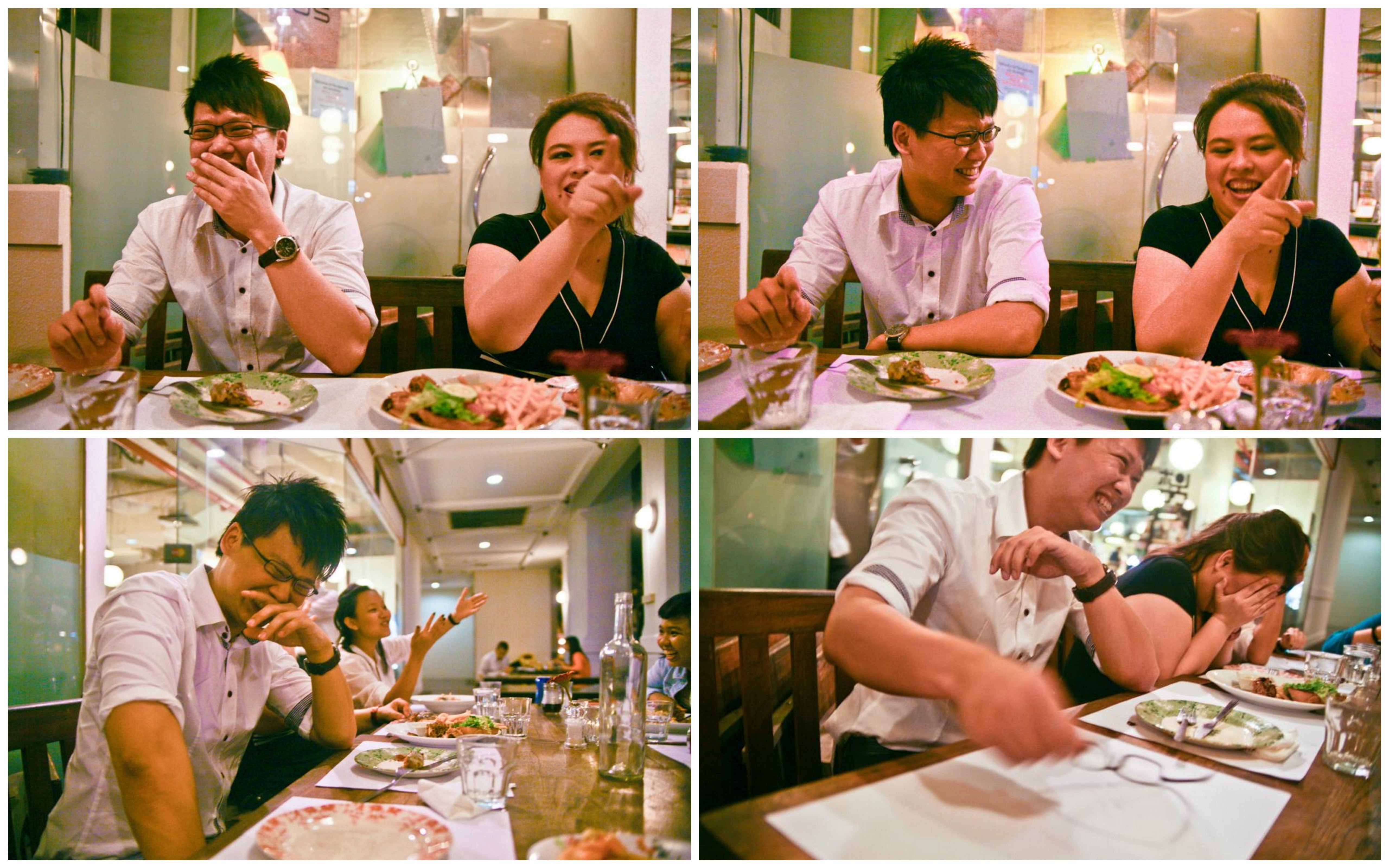 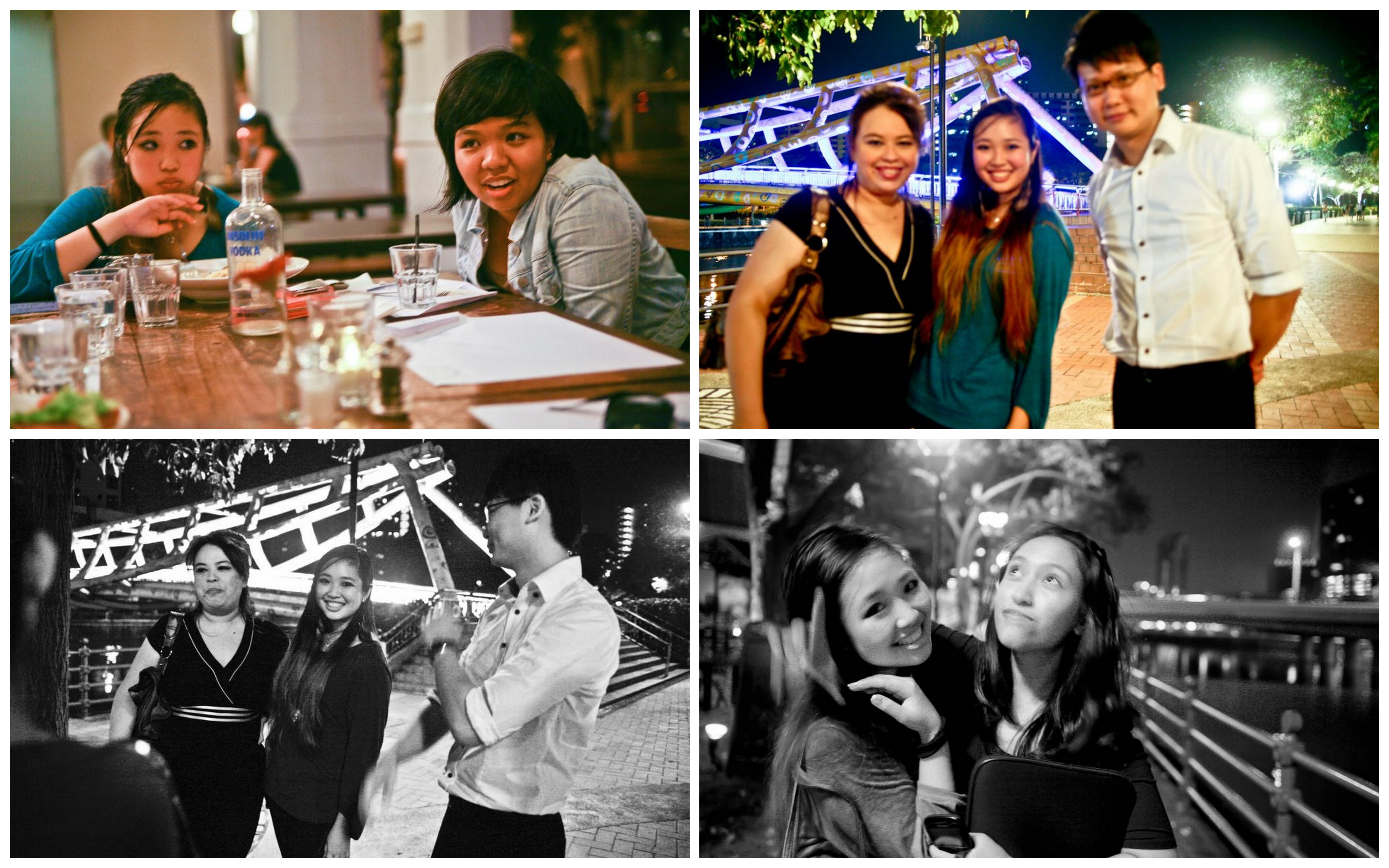 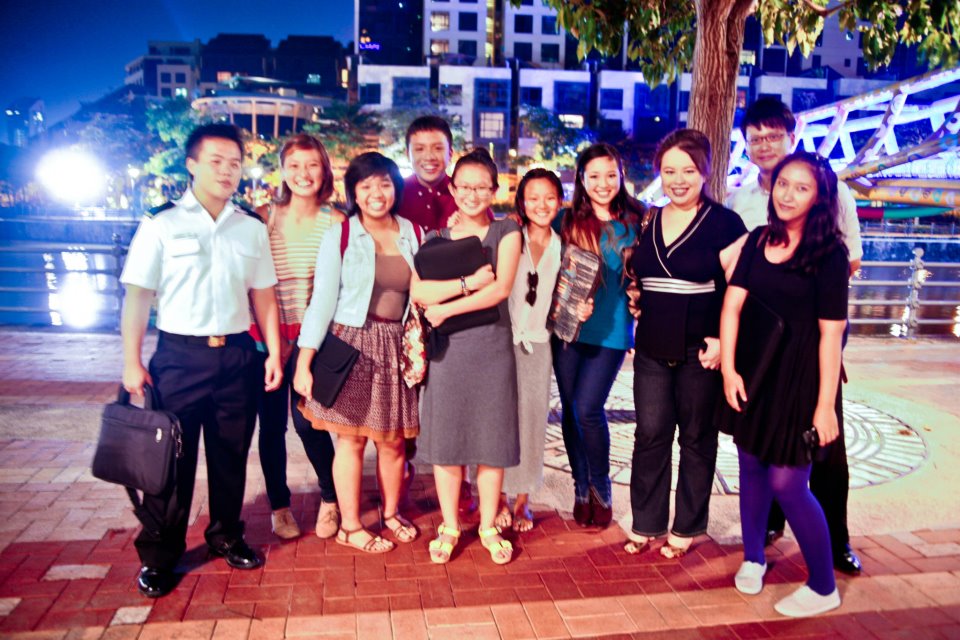 I say i “went for dinner” all calmly and stuff, but in reality i got off at the wrong station (call to mind: RE-ORIENTATION OF DIRECTION I come from the west now) and realized, this is not clarke quay, took forever to get to clarke quay, got COMPLETELY lost and walked off in the wrong direction, when i was finally rescued by clement he questioned me on whether i knew how to read a map to which i retorted No i am not an army boy.

on the way back i momentarily considered faking pregnancy just to get a seat on the train, such was the extent of my fatigue.

in a completely logical consequent conversation with Cindy, we decided to pull an all nighter tonight because of the classic reason too much shit to do too little time

voila friends, my week. i should really get around to writing a book of some sort documenting all the nonsense that happens to me. might call it LIFE, Y U SO DRAMA Y.