Currently listening to:teasing to please (left side, strong side) by death cab for cutie
Status:tired. 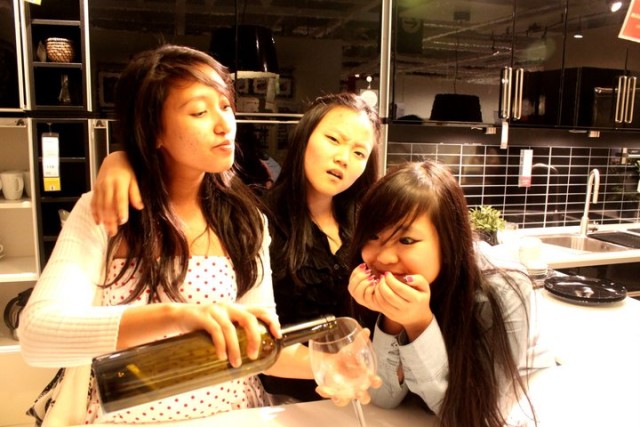 The psych ward orderlies, pulling a woman off the floor
as she curls up like a smudged potato trying to nose herself
back into the dirt, resemble the common potato harvesters
in Jean Francois Millet’s noble painting The Gleaners,
and the young woman, drawing all of this on her paper pad
sketches furiously back and forth, one line at a time.
She says quickly to me ‘all delusion is a struggle with form.’
And the psychiatrist standing off sides, comments, ‘we
must administer more Haldol, she’s hallucinating.’
The gargantuan man at the window trying to reach God
extends his lethargic arm out and the playing cards drop.
At the edge of the room a man in spectacles pages through
a book. Laughs quietly, losing his religion, and he whispers
to me that ‘we have angels and demons in us—they
squirm like octopi in our grinning, as if trying to take shape.’
I trace my mouth with my hand, as if trying to find it.
The woman with a mole on her face shouts out that Jesus
is the example of dialectics; the struggle with opposites—
the struggle with life and death, meaning and oblivion,
and the young woman at the table scratches her right arm
with her fingernails. One of the orderlies pushes it away.
The young woman says, ‘I have a right to give up.’
Sunlight shines through the cracked window panes.
The room has a pewter glow to it. Shadows hit the walls.
The man points to my grin, says, ‘you see the human smile
is a twisted tabernacle; it’s the joke God made in us—
so that we show who we really are to each other whenever
we grin.’ That our smiles could contain a node of angels
and demons is taken up by the psychiatric residents—
‘I feel so revealed,’ a woman says and the other, a man,
whispers, ‘let’s get a drink afterwards,’ and the woman
who is revealed pauses, grins. Steps back behind the
psychiatrist, who says, ‘psychopathology is the revealing
of a brain disorder; it’s medically treatable.’ A man pounds
on the table, shouts out that there are bugs crawling
up his arms, shoos them off, and the residents, piling
together in a batch, cluster around him to look.
‘Disease is an amalgamation of misinformed thoughts,’
says the psychiatrist, pointing at the man with bugs
invading his arms and his neck, and I feel the tongue
in my mouth as it moves, suddenly, like a squid.
I can’t tell whether I have a tongue anymore or a squid.
‘Doubt is the attempt to regain perspective,’ he adds,
pointing to the lack of doubt; the delusion. The man
in the spectacles laughs again, points to his ½ grin—
and he announces to the room that ‘we’re just creatures
of deception at all times and it’s about time to admit it—
we can’t even tell the soul from the source…’ and he squawks.
The residents act bewildered, look around at each other.
And the psychiatrist informs them that uncertainty
isn’t something worth getting caught in, in psychiatry.
‘Medicine is the enactment of a cure,’ he reassures them.
‘Even if it is inexact for a while.’ I step closer.
Stand alongside the woman who is still sketching.
She’s drawn the gleaners. She says to me, ‘information
comes from uncertainty, don’t you think?’ And she
smiles sheepishly, and I can’t tell if the smile has an angel
or a demon in it. The psychiatrist reassures the residents
that ‘the cure is when a person recognizes reality again.’
I feel the squid in my mouth move around. And my smile
feels like it’s wrapped around two squirrels fighting.
The young woman scratching herself fights on. ‘I have
a right to give up,’ she announces again to the sunlight.
The psychiatrist looks at her and he rubs his chin.
Scribbles something on a prescription pad. Hands it off.
‘What about the imagination?’ asks a resident, puzzled.
‘That’s something for art,’ the psychiatrist answers.
‘And science, and religion,’ he adds, ‘but not for us.’
And they all turn and depart the room in a brawl.
The woman drawing on her sketch pad rotates it,
rotates it again, as if trying to find herself inside it.

Sometimes i squint at my room and try to figure out if i can drag and drop my piano here, then i remember that my ex-mouse ate my pedal strings. it has been too long since we’ve played and sung, far too long. walking along the grass smiling at tourists and striking up six part harmony, discussing dreams of spontaneously travelling hopping from country to country and singing on the streets whenever we ran out of money. that was before reality ie. airfare is kind of expensive, who knew! hit us.

today ernest showed me this

Those who suffer from hypersomnia have recurring episodes of excessive daytime sleepiness (EDS) which is different from feeling tired due to lack of or interrupted sleep at night. They are compelled to nap repeatedly during the day, often at inappropriate times such as at work, during a meal, or in conversation and even on the floor in front of a heater. These daytime naps usually provide no relief from symptoms.

i panicked for about ten minutes and tried to remember if i displayed other symptoms of brain damage these things are not funny at 12.15 in the AM despite ernest going “do you like, fall asleep mid-sentence or what because that would be quite hilarious” and then i realized another side effect of hypersomnia is slow speech and i was like HA GOTCHA brain is fine i can speak like a bullet train watch me go.

so i made myself a cup of milo and all is good.