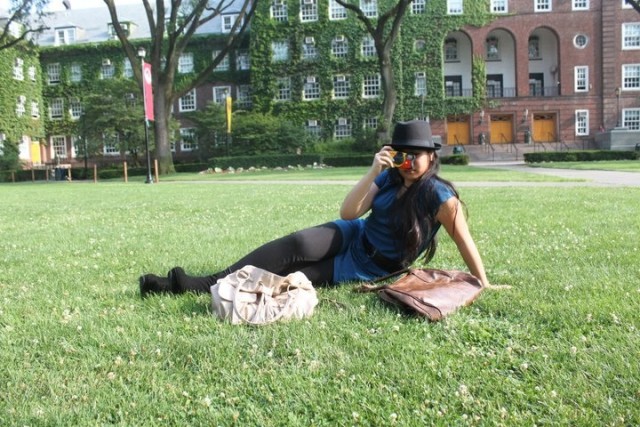 Since the recent discovery that my dslr and my dad’s mac hate each other and refuse to let me upload photos of today, here’s one of me on a different college campus!

First day of official school school had me like a fish out of water, but i mean in it the best way possible. It’s been so long since i’ve sat in a lecture theater and had information thrown at me, but i fall back into routine so fast that i remind myself of a golden snitch with flesh memories. Still, so many new things! I revisited the literature module listing and the minute im done with my current prefixed lit mods (survey of lit a.k.a. the greatest lit hits of all time, critical writing, intro to lit, intro to american lit) i am going straight for the ones ive had my eye on since the start of the semester, ie:

COOL OR WHAT. imagine:

friend: hi, what are you studying this semester? im doing advanced theory in physical engineering and the modern applications to mathematics (i just made that up idk if there’s really a course like that.)
me: im studying virgins and vixens.

Besides my four literature modules, i’m also taking business law and french this semester. I feel incredibly intellectual everytime i look at my timetable. Soon i’ll be rambling off in legalese. Legalese in french.

Ha i am going to be so annoying.

Dinner at ayam something something with the PGC after school. It’s at lucky plaza OKAY WAIT DID I JUST SAY ” ETC ETC AFTER SCHOOL”?! that’s the strangest thing ever. I cant believe i have an “after school”. i cant believe i have a “school”. months of laughing at people younger than me along the lines of exam? what is this exam you speak of?! and oh i love sleeping in! dont you? oh lol you have school sux2bu karma sure is a bitch.

Anyway. Catching up with PGC over.. boneless chicken and fizzy bandung suspiciously named Happy Juice which imho sounds like some sort of drug you market to unsuspecting young kids.. was good, besides the fact that i was so tired from lugging my norton anthology of english literature volume i or volume ii or BOTH around the whole day depending on what lectures i had. Same old, same old. Su shouting DONT TAKE PHOTOS OF ME WHEN IM HUNGRY syaf feeling up my.. head.. ern doing her asianchick impersonation connie experimenting with new colors her hair is her palette and her hairdresser her instrument, and ranice dumping her prada tote on the train floor that girl pains me, she really does.

Regaling tales of ntu to them re: goodlooking people spotted on campus!!! (any ntu people reading this i just called you goodlooking ok now gimmie a cookie) had them suddenly regretting their college choices.. well all i can say is, if you see five girls in their sunday’s best suspiciously loitering around the nanyang campus, you know why.

Oh yes and everyone’s taking down their box of nationalism and blowing the dust off, waving it high and proud, especially meridians because the national day video was filmed in a certain junior college this year..