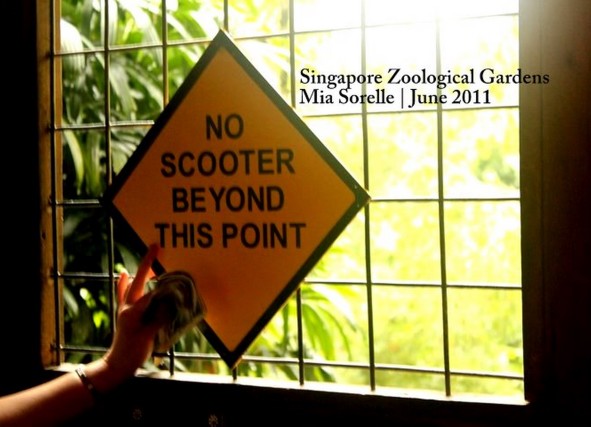 It was pretty fun in the end though- worries about having to hide under the toilet shelters if it rained heavily were unfounded. Next time, we go to Discovery Centre. 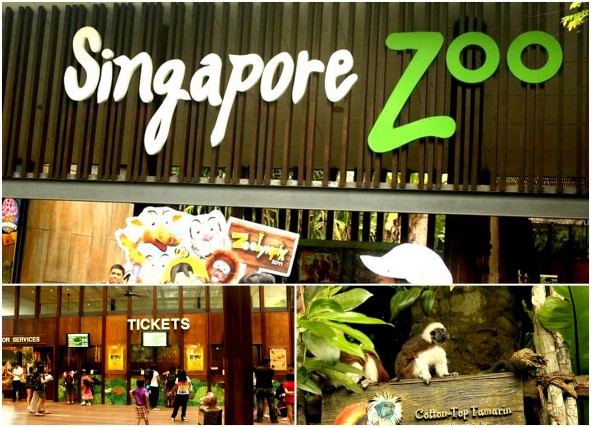 Met up with Sa and Ying in the afternoon to go down to the Zoo, the rest were there earlier (since 10am!) but i had to give tuition/Sa had to pack for taiwan/Ying had FTT so we joined later

You can also opt for some buggy thing to drive around in, but i personally think it makes no sense since you cant bring the scooter into many areas of the zoo. 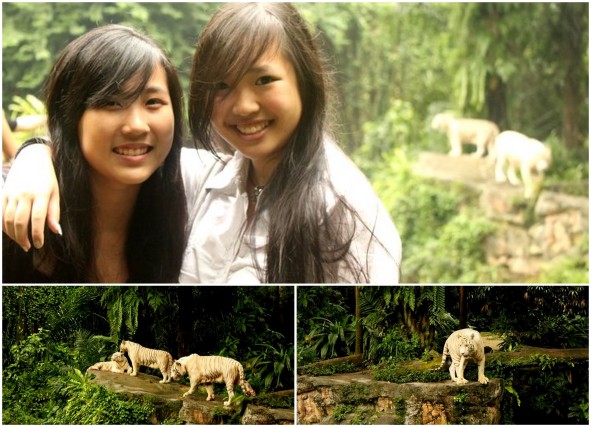 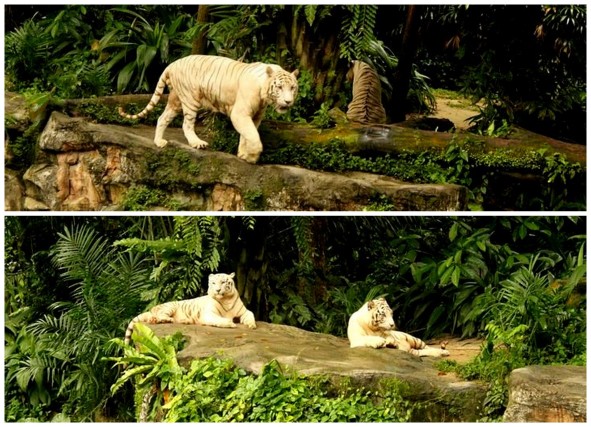 NYAAAAAAA WHITE TIGERS!!!! MY FAVOURITE ANIMAL IN THE ENTIRE WORLD!!!!!
This almost made up for not being able to see the Polar bear and the Penguins (they’re being moved to the River Safari and Bird Park respectively :c )

Me: Whoa check out the muscles on that tiger. Hot stuff sia.
Sa: …. MEEMAH. NOT EVEN YOUR OWN SPECIES!
Me: I was kidding!!! (small voice) but really quite hot ok

We stood there for pretty long, just admiring the tigers. Big cats are gorgeous. 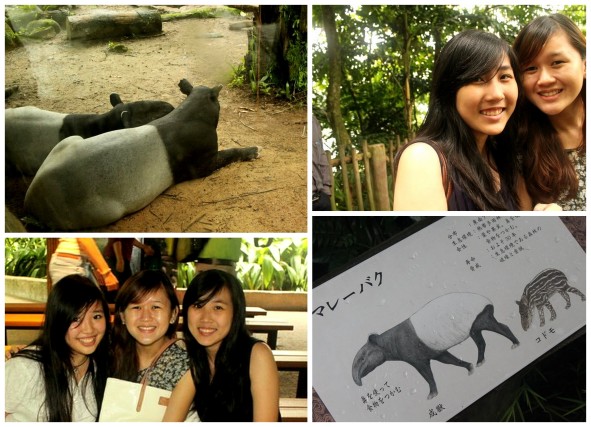 Tapirs, which are Sa’s favourite animals. I noted that they reminded me of bentwy somehow, leong ying agreed, Sa smacked us and almost died laughing.

On a side note though, they’re really quite sweet. Like an old married couple!

Also saw Otters which moved too fast to get a proper picture of, but they were adorable!
OKAY FUN FACT TIME: Sea otters actually hold hands when they sleep so they wont drift away from each other. Cue: awwwwwww…

Told you i was a wealth of useless information and random trivia. 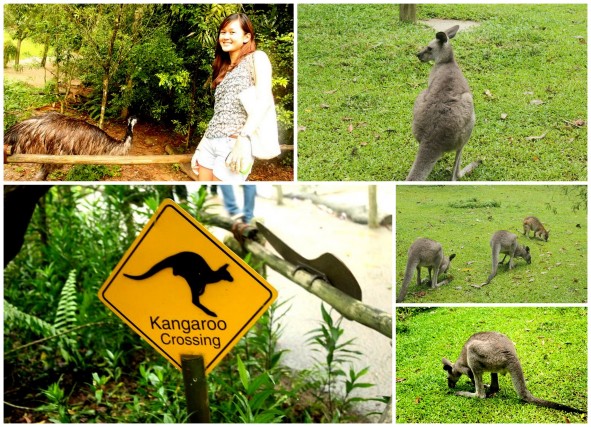 The Australian Outback section with Kangaroos and this really grumpy bird! I think it was an.. emu.
Kangaroos walk kinda funny but apparently they can jump really far (13 metres!!) so i didnt dare to laugh in their faces. 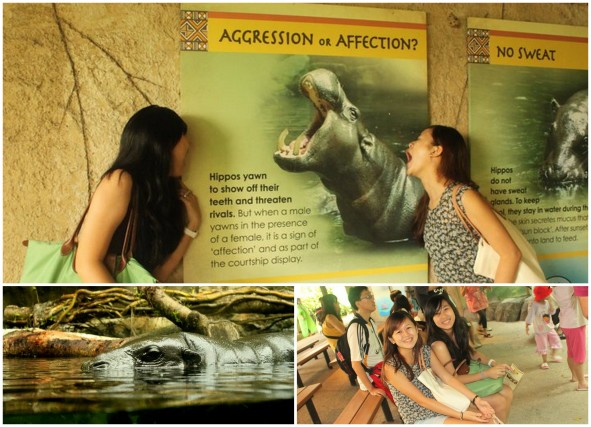 Mama hippo and baby hippo were cute, they also looked like they had their tails punched in but i think they were just born that way.. 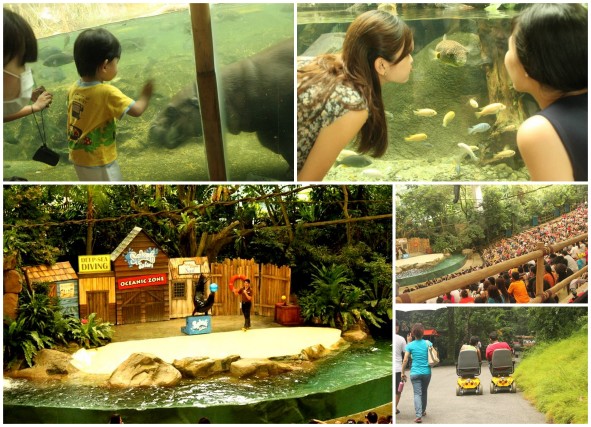 PUFFER FISH!!!! (already mentioned in the previous post)
Completely stole the hearts of all the girls, thanks to its smiling face.

Also, went to watch the Seal show! I think its called Splash show or something.
KASDNKJADKJ THE SEAL WAS AMAZING. it looked really slippery but it did its tricks amazingly well!! This kid in the front row nearly went mad spasming with excitement everytime the seal splashed water at him. 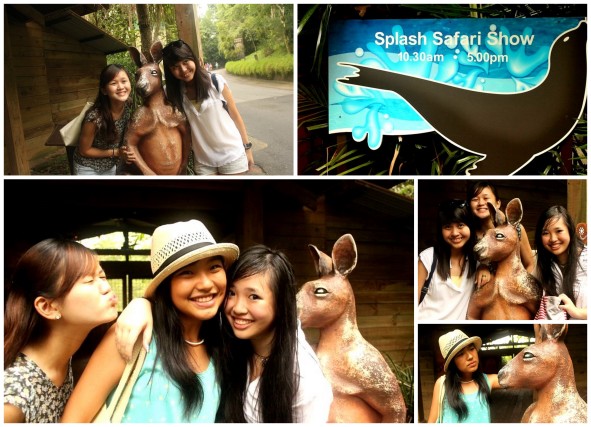 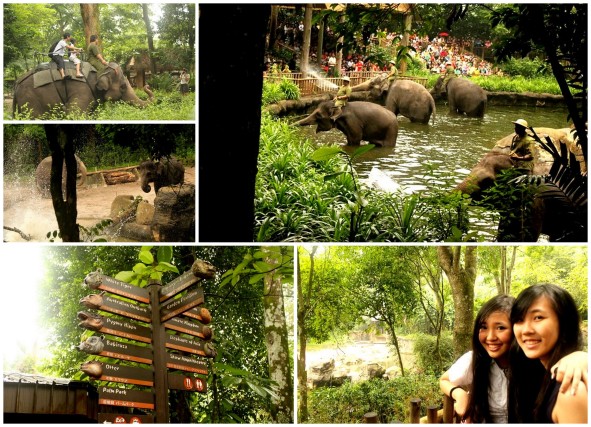 Also went to watch the Elephants of Asia (AZNPRIDE) show- that’s where we met up with the rest!
It was okay, everyone was highly entertained when the elephants pooped in the middle of the show.

uh uh someone’s been having too many bananas… 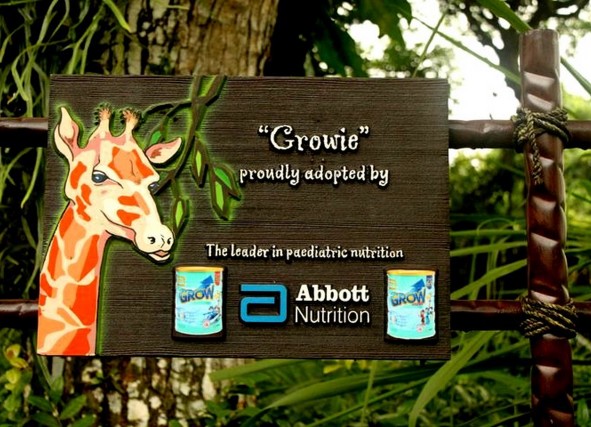 Adopt a Giraffe, name it Growie.

(Couldnt get a proper shot of the giraffes, they were on the other end of the enclosure munching leaves) 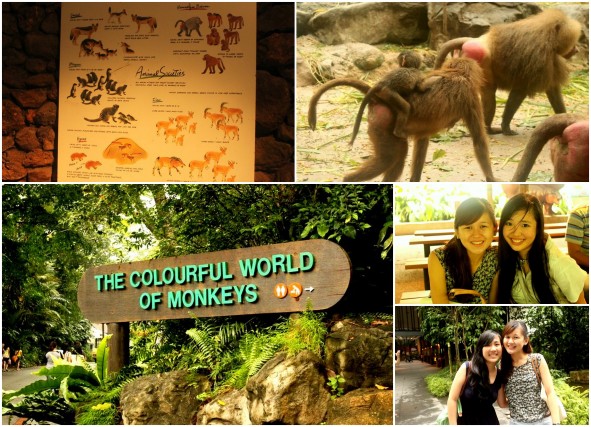 Went to see the monkey’s next!

When i showed my baby sisters the photos at night, she went “Thats so Lion King”

Check out this guy he be so excited!!!! 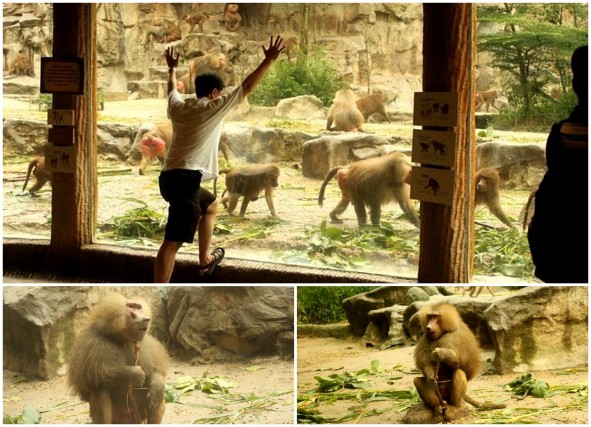 the rest of the monkeys broke out into fights every few minutes. 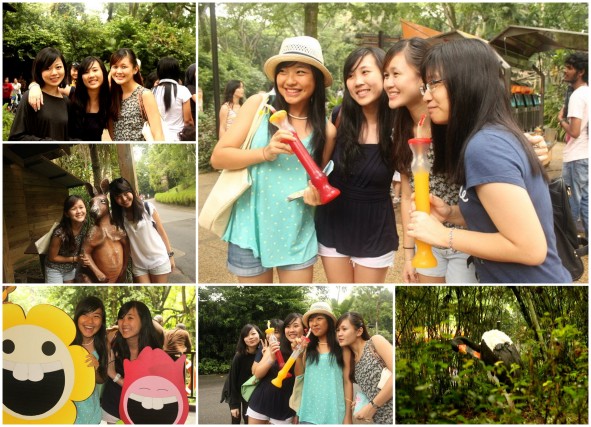 Ridiculously expensive tube of freezy ice slush. Five ninety for each swirly tube, comes in Mango and Cranberry. But then you realise that Green Tea Pokka costs three dollars and you’re just like heck. might as well try something different since youre at the zoo.

They’re really not shy about this whole inflated-prices thing ah.

Went to the Fragile Forest next! 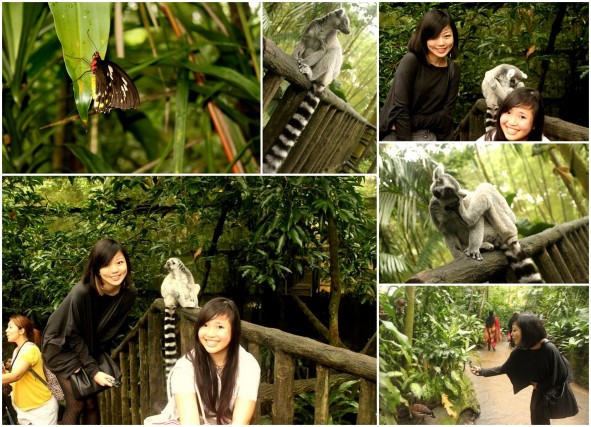 Check it out!! It’s the Madagascar dude! Ring tailed lemurs (breaks into I LIKE TO MOVE IT MOVE IT dance)

In real life they’re not that exciting though.. mostly they just sit around scratching their head with their hind legs and basking in tourist attention.

(Snooty Voice) Yes i know im absolutely charming. You may pet the tail. Mind the fur. 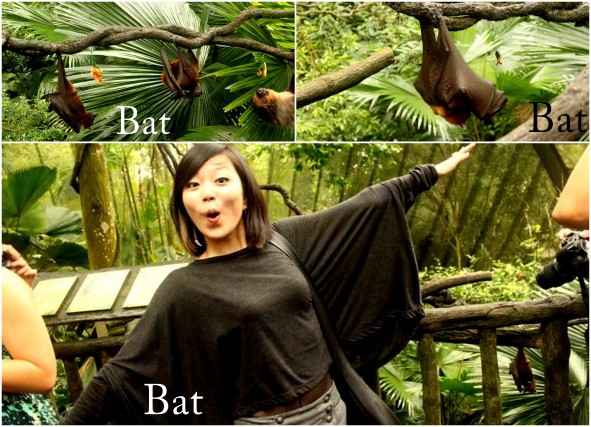 Check it! Family of bats!!

Oh yeah something else really funny happened. When we walked into the Fragile Forest, this duck was just wandering around on the floor and we were all like, ooh! Duck! and started snapping away.

So Jenna bent down to take a photo of the duck and it attacked her hair. It wouldnt have been that funny except this is the second time it happened, when we had choir camp in sec three a bird tried nesting in her hair. 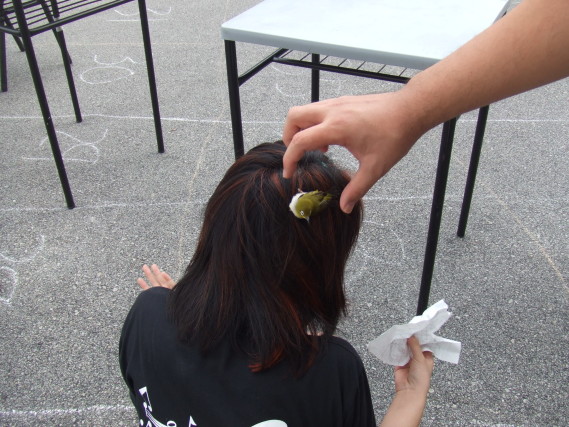 Wow. Birds just cant keep out of her hair huh. 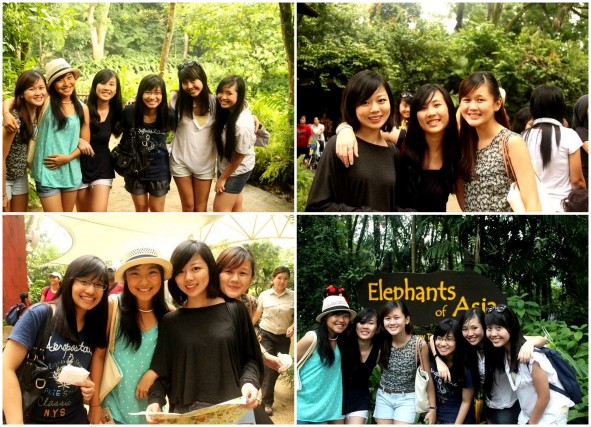 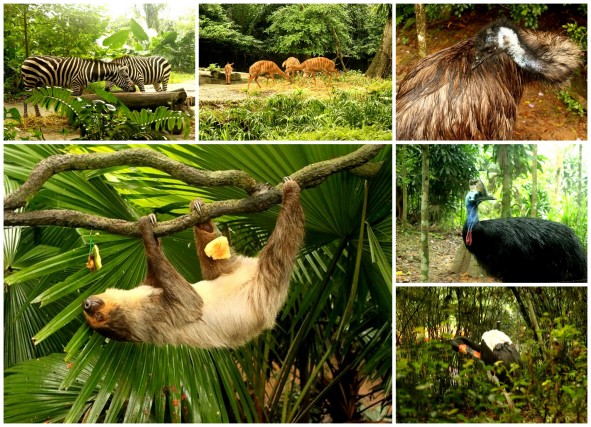 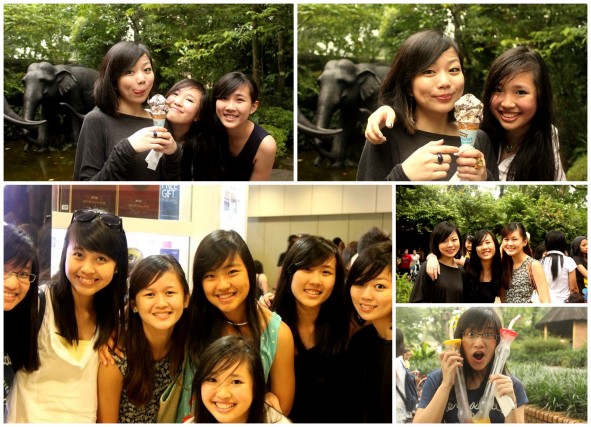 Customary Ben and Jerry’s ice cream after the zoo!

We didnt get to see the Sunbear (sulks) or the Lions (hiding in the back) or the Manatee (DKJSAJDNASJDN) but i think we covered pretty much everything within four hours! The zoo closes at six, so we had to leave after that. 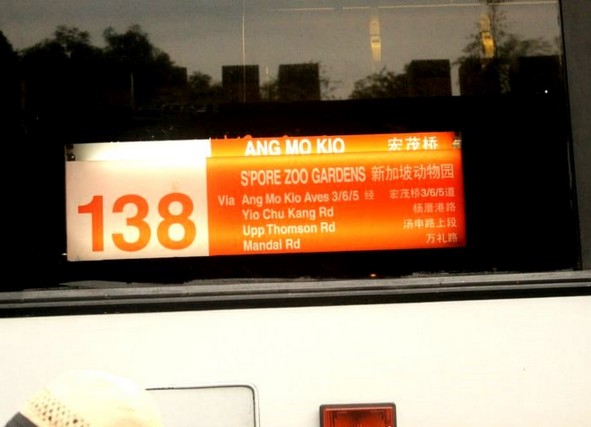 And that, girls and boys, is how you get to the Singapore Zoological Gardens.

Probably going to the Central Park Zoo next month, so i’ll look out for the penguins there 😉